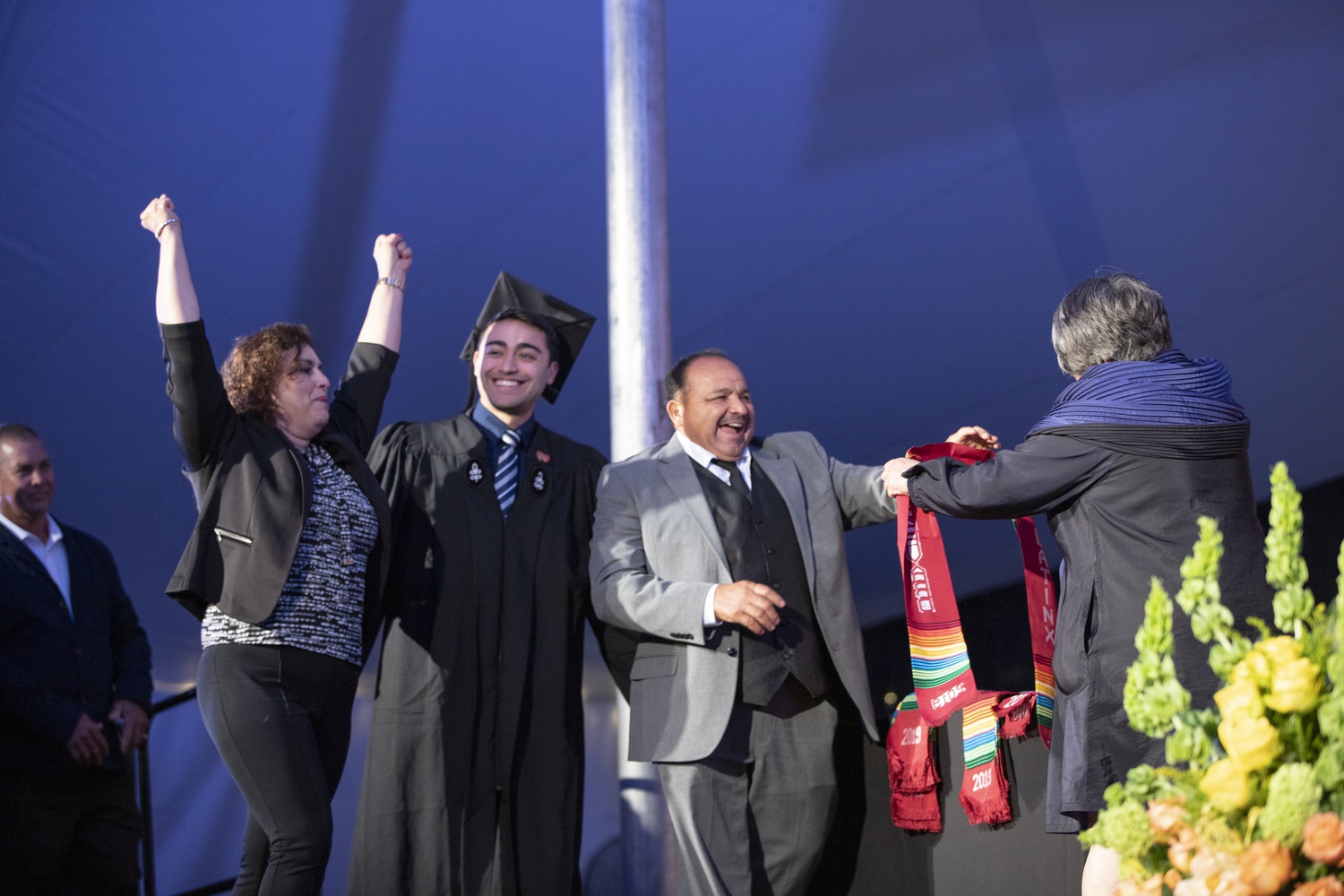 College students gathered Tuesday evening for two commencement ceremonies honoring students from underrepresented backgrounds, one for Latinx students and another for black students.

Before the College-specific event, undergraduate and graduate students gathered in Radcliffe Yard Tuesday afternoon for a University-wide black commencement.

At the Latinx commencement ceremony, graduates received sarape stoles and listened to speakers who discussed their experiences at Harvard as Latinx students. The ceremony was narrated in both English and Spanish.

Harvard Extension School student Adan Beltrones Orozco began the event’s speaking portion with an address in Spanish. After that, Zoe D. Ortiz ’19, a Crimson editorial editor, delivered the undergraduate address, during which she urged her fellow graduates to remain proud of their Latinx heritage.

“I am a product of so many struggles and so much perseverance in the face of a country that doesn’t believe that I belong within its borders,” Ortiz said. “I am a brown girl, a Latina, taking up space and places that were not made with her in mind.”

Ana R. C. Andrade ’19, who attended the Latinx graduation ceremony, said she appreciated the inclusion of languages other than English in the event’s proceedings.

“So many parents, maybe Spanish or Portuguese speaking, who maybe feel a bit out of place in other Harvard events... can come into that space and really be greeted by a language that they know and have that bit of culture there,” Andrade said. 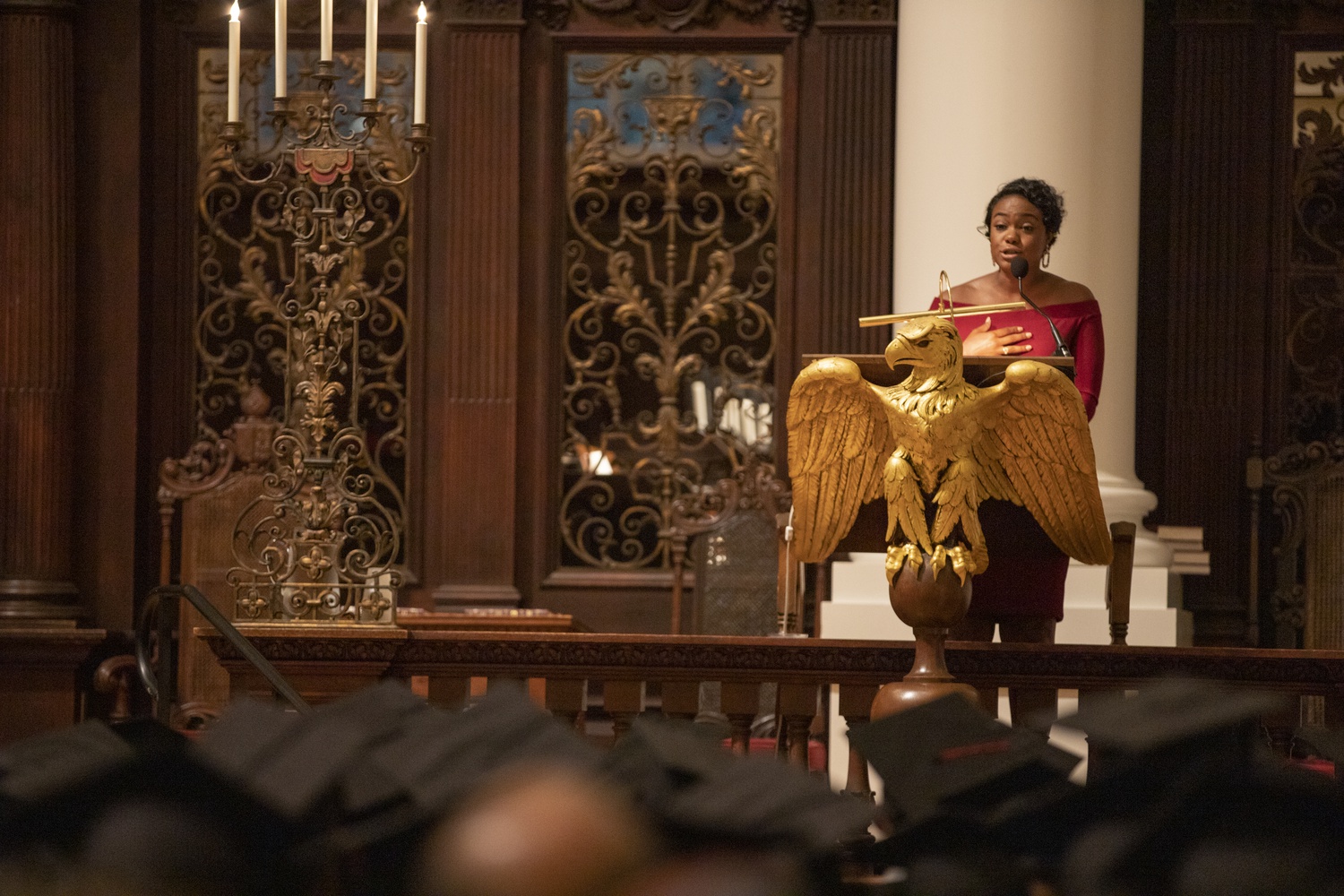 The College’s black graduation ceremony featured musical performances from students, presentations of awards, and a speech from Tatyana M. Ali ’02 — an actress best known for her role as Ashley Banks in the comedy series “The Fresh Prince of Bel-Air.” Though Professor of the Practice of Public Policy Cornel R. West ’74 had been scheduled to speak, he was unable to make it to the ceremony.

In her keynote speech, Banks commended students for their accomplishments and encouraged them to make a “lasting impact” through meaningful relationships and support systems beyond college.

“Investing in your community will give you a sense of purpose much greater than yourself,” she said. “Continue to create community wherever you find it.”

“How do we increase black solidarity that is inclusive of mixed race, queer, transgender, and Afro-Latinx communities?” Freeland asked. “How do we make space for other narratives of blackness?”

After the speeches, attendees took a moment of silence to remember Courtney S. Blair ’19, who passed away in 2018.

To conclude the event, Dean of the Faculty of Arts and Sciences Claudine Gay presented kente stoles to the graduates with John S. Wilson — the former president of Morehouse College and a senior adviser and strategist to Harvard’s president. Gay became the first African American FAS dean in August.

This year’s ceremonies were not the first time Harvard hosted commencement exercises for students from historically marginalized groups. This year marked the fifth annual Latinx commencement and the third annual black commencement.

Several College students said they were frustrated that the University-wide Latinx graduation overlapped with the College’s ceremony for black students because they were unable to attend both.

Melonie N. Vaughn ’19, who attended Black College Graduation, said the conflict was “unfair” to students who identify as both Latinx and black.

“I identify equally with both. I’m a black Latina,” Vaughn said. “I shouldn't have to choose between my identities.”

Andrade said she thinks of both parts of her black and Latinx identity as “each a piece of the puzzle that is me.”

“By themselves, none of them really makes me feel complete,” she said. “That's why I wanted to be part of both of those [events] to fill those different parts of my identity.”

Andrade and Vaughn said they think the conflict stemmed from the fact that the Latinx graduation was organized primarily by graduate students who might not have known about the College-specific event for black students.

Andrade said she reached out to the Latinx Graduation Committee to inquire about the conflict. She said the organizing committee told her to notify them if she decided not to attend the University-wide event so they could open up a spot for someone on the waitlist.

“Immediately being hit with the, ‘If you’re not going, we’re giving your spot away for someone else’ in the moment felt a little jarring,” Andrade said.

The committee, which comprises nine graduate students and two administrators, did not respond to multiple requests for comment.

Andrade said she does not hold “any hard feelings” with either of the event planning committees despite the scheduling conflict.

“I think a lot of this comes from Harvard’s institutional lack of support, supporting all of these events, because it then falls on all students themselves,” she said.

College spokesperson Rachael Dane did not respond to a request for comment.