From Boston Calling 2019: CHVRCHES Rise Above the Fray 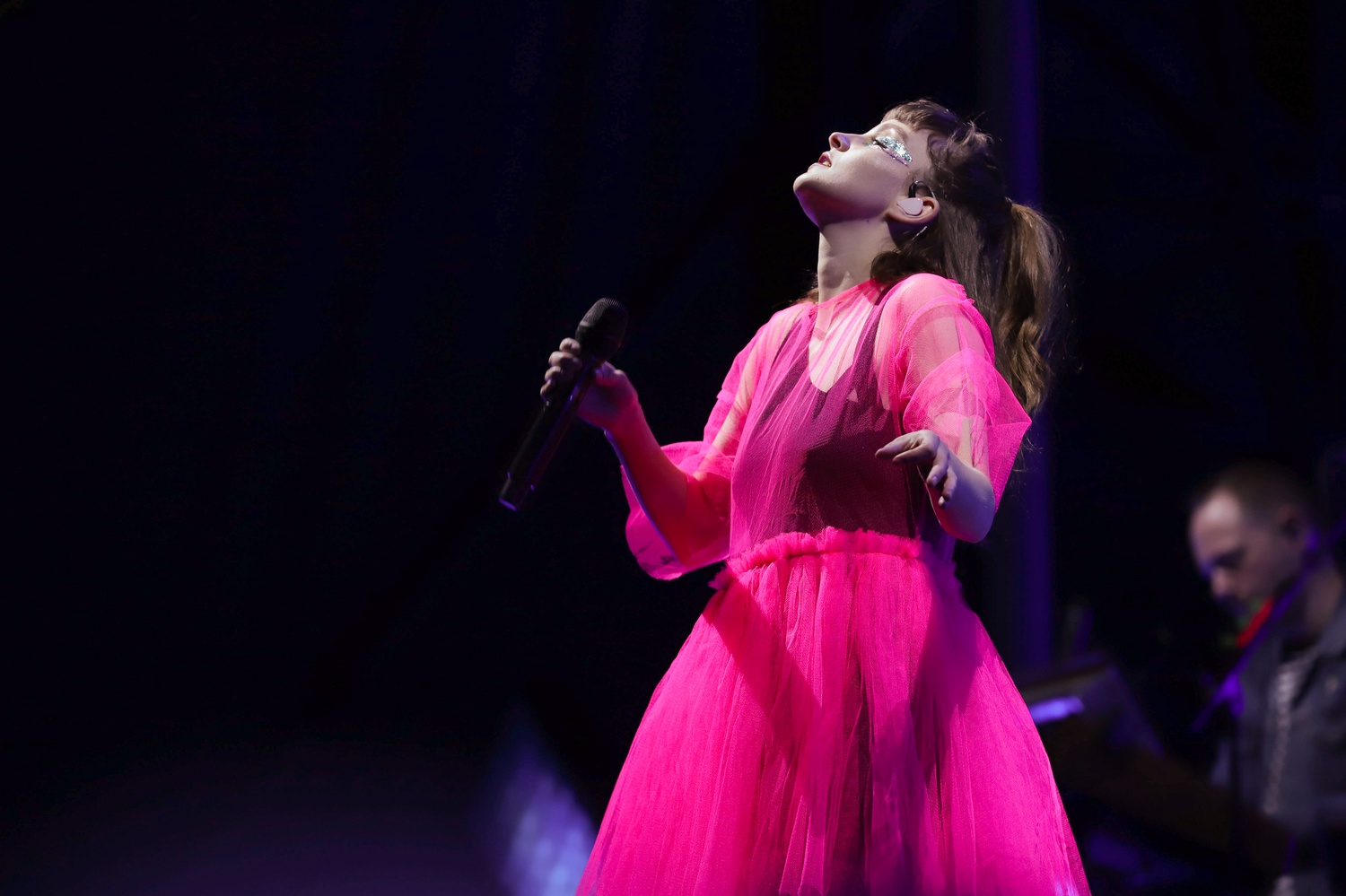 Many festival attendees did not buy their tickets to see Scottish synth-pop group CHVRCHES. This was less because Twenty One Pilots’ fan base dwarfs CHVRCHES and more because the band was enlisted as a last-minute replacement for Janelle Monáe, an act they conceded was twice as cool and more well-rounded than them. But coming back from two weeks of self-described laziness at home, CHVRCHES delivered a resoundingly clear and danceable set that rewarded those who chose to seek out the Blue Stage last night.

Lead singer Lauren Mayberry commanded the stage from the very start. Clad in a pink fluorescent dress, she spun and joked her way through the night, crafting a larger-than-life stage presence. Her ability to move the crowd brought into question the necessity of having the rest of the band on stage, especially since Martin Doherty and Iain Cook played synths for much of the set. Indeed, there likely exists a version of CHVRCHES in a parallel universe with just Mayberry on stage. What that version lacks, though, is the intensity and occasional banter Mayberry’s bandmates brought to the stage. Even as the spotlight remained firmly on Mayberry, the rest of the band provided a selfless energy to her performance. Cook performed a vigorous guitar solo largely in the dark during “Forever,” and tour drummer Jonny Scott stepped up on the apocalyptic and destructive cut “Science/Visions.” The rest of the band saved their largest impression for last, performing a dominant outro to set closer “Never Say Die” on their own after Mayberry left the stage. The other members also shone when Mayberry was on the stage, as they completed 2013’s “We Sink” with a dazzling display of lights and synths that complemented Mayberry’s dancing next to the drums.

Mayberry’s electrifying vocals and the band’s refusal to sink into the shadows contributed to a heartfelt and impressive set. CHVRCHES came out strong initially, opening with 2018 hit “Get Out,” which gave Mayberry a chance to demonstrate her range from the onset. The band played mostly from their new album “Love Is Dead.” Despite the title, and even as many of the songs wrestled with the themes of rejection and the decay of relationships, the vocals and synths evoked an uplifting mood. Even though CHVRCHES did not play their chart-ascending hit “Here With Me,” their hour-long set provided enough gems to keep the audience in a perpetual state of dance. The band was thankful for the crowd’s energy, professing their love for performing in the city and playfully addressing the irony of Mayberry, a Brit, drinking tea between tracks in Boston. Boston Tea Party jokes aside, CHVRCHES delivered an eminently enjoyable performance.

That said, Boston Calling failed CHVRCHES logistically. Besides the vocal mixing on the Blue Stage sounding off at the beginning of the show — as it did for every other Blue Stage performer that day — the band’s set time needlessly overlapped with Twenty One Pilots’. Even as CHVRCHES ceded the stage a few minutes early, fans who stuck the course arrived at the headliner almost half an hour late. To avoid this conflict, a decent chunk of the crowd chose to leave CHVRCHES near the tail end of the set, dampening the mood and taking something away from the spectacular climax of “The Mother We Share” and “Never Say Die.” This problem was not lost on Mayberry, who joked after “Clearest Blue” that she mistook Twenty One Pilots’ pyrotechnics for a forest fire in the distance and affirmed that, while her ponytail was more acoustic than pyrotechnic, they would still show the crowd a good time while they could. The organizers could have easily avoided this dilemma by having CHVRCHES start 15 minutes earlier with Greta Van Fleet — as is the plan for acts on Saturday and Sunday — eliminating the overlap with the headliner. Instead, for reasons unknown, they chose to stagger the performance times, ending CHVRCHES’ stellar set on a somewhat sour note. Still, CHVRCHES responded with their trademark intensity and captivated their remaining audience with a blistering rendition of “Never Say Die,” demonstrating their resilience in the face of unforeseen challenges.