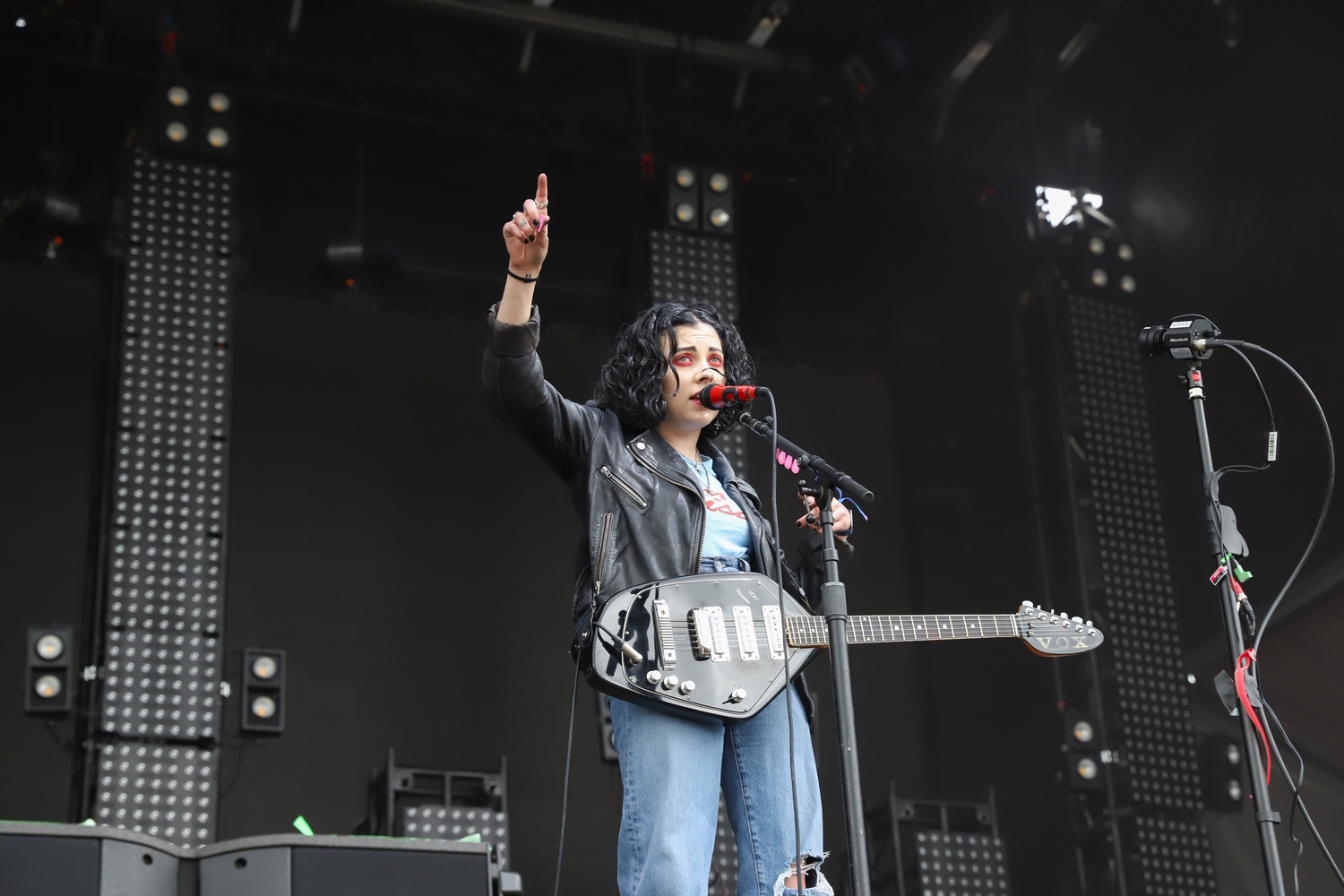 Baltimore-based punk outfit Turnstile opened up the Green Stage with raucous energy, entertaining the large number of Twenty One Pilots fans camping out for front row seats at the headlining set. The intensity of the band initially surprised much of the crowd. As a result, some of Turnstile’s most successful tracks — “Generator” and “Real Thing” — lacked a true audience. But as the shock wore off, Turnstile did something unexpected. They redefined themselves, starting with the jazzy intermission music played when the band needed a break between harder songs. The songs in question were their own — one of which was ironically titled “Bomb” — and gave an aura of self-awareness that similar acts tend to lack. Turnstile also demonstrated their group cohesion by switching lead vocals off to bassist Franz Lyons mid-set. The New York Yankees hat-clad rocker brought a mellower demeanor to the stage on tracks like “Moon” and helped show off Turnstile’s surprisingly large range. This turn coincided with the crowd’s formation of a mosh pit near the stage. As Turnstile played an incredibly moving synth-based outro to one of their mellower, Lyons-led tracks, the craziness lifted for a moment as all in attendance fully took in the 180 degree turn they were witnessing. However, true to their roots, Turnstile closed with one of lead singer Brady Ebert’s older cuts titled “Gravity,” and the band ended their set with the same intensity that put off many casual onlookers earlier in the hour. This time, though, they performed for a self-selected group of fans fully along for the ride.

Facing a somewhat sparse afternoon crowd, Bear Hands took the opportunity to promote their new album, “Fake Tunes.” While songs from the two-week old album had their share of fun moments, they largely fell flat. Part of this was out of Bear Hands’ control: the sound mixing on the Delta Blue Stage seemed to be lacking for most of the day, drowning out each successive lead singer until Chvrches. During “Blue Lips,” lead singer Dylan Rau’s microphone cut out entirely during the second verse. Given that the verse was one of the few parts of the song actually sung on stage — featured artist Ursula Rose was “thousands of miles away,” according to Rau — any feeling of a climax dissipated even after Rau singing became audible again. That being said, Bear Hands left the crowd with a few memorable moments. Bassist Val Loper playfully left the stage and came back with maracas for their deep cut “What a Drag,” which Rau labeled “a special treat” for the Boston crowd. New song “Reptilians” was preceded by playful banter about John Harvard acting as big brother and a dedication of the song to the lizard overlords running the world behind the scenes. In the set closer “Giants,” Rau danced around the stage, eventually falling in an exaggerated manner before finishing the final verse partly on his back.

While Bear Hands played at the Delta Blue Stage, the Manchester indie-pop band Pale Waves put on a high energy show on the festival’s Red Stage. Not even the cloudy weather could keep people from dancing when the group opened with “Eighteen,” a song from their 2018 album “My Mind Makes Noises.” Lead singer Heather Baron-Gracie’s clear vocals layered over strong guitar and a oscillating beat made it impossible not to bop along to the catchy tune. The band used their afternoon set to showcase several songs from “My Mind Makes Noises,” most notably “Kiss” and “One More Time,” while seamlessly incorporating “The Tide” from their earlier EP “All the Things I Never Said.” Not even the band could keep from nodding and dancing to their own tracks — Baron-Gracie scooted about the stage while singing, subtly waving her fingers (the middle ones in particular) when not playing the guitar. “This song’s a bit dramatic, but all good things are dramatic,” Baron-Gracie said before jumping into their final song, “One More Time,” and she and the crowd danced together one last time before Pale Waves left the stage.

One of the highlights of the day was the Australian indie group Gang of Youths. Taking the Blue Stage in the late afternoon, the rockers capitalized on a mood often overlooked in the alternative scene: optimism. While their seven-song set asked tough questions, the resounding answers created a surprising mood of exuberance and playfulness lead vocalist David Le’aupepe — the stylistic midpoint between Jon Snow and Khal Drogo — professed his faith in people throughout the concert. He dedicated “The Heart Is a Muscle” to the memory of his deceased father, who taught him to “love well, love hard, and love long.” During the band’s 2015 cut “Magnolia,” Le’aupepe jumped into the crowd, hugging and dancing with as many festgoers as possible on a profoundly individual basis. He also demonstrated his chops as a showman by endlessly complimenting Boston for, in no particular order, Frasier Crane, Ted Williams, Brookline, and the best years of Chris Sale. The peak of the set was the 2017 hit “Let Me Down Easy,” preceded by a benediction from Le’aupepe in which he asserted that there is no problem in life that cannot be solved by dancing for five uninterrupted minutes. For those five minutes, and throughout the entirety of Gang of Youths’ time at Boston Calling, existential dread was tinged with an unavoidable sense of happiness.