From Boston Calling 2019: Mura Masa and Bonzai, A Performance Duo 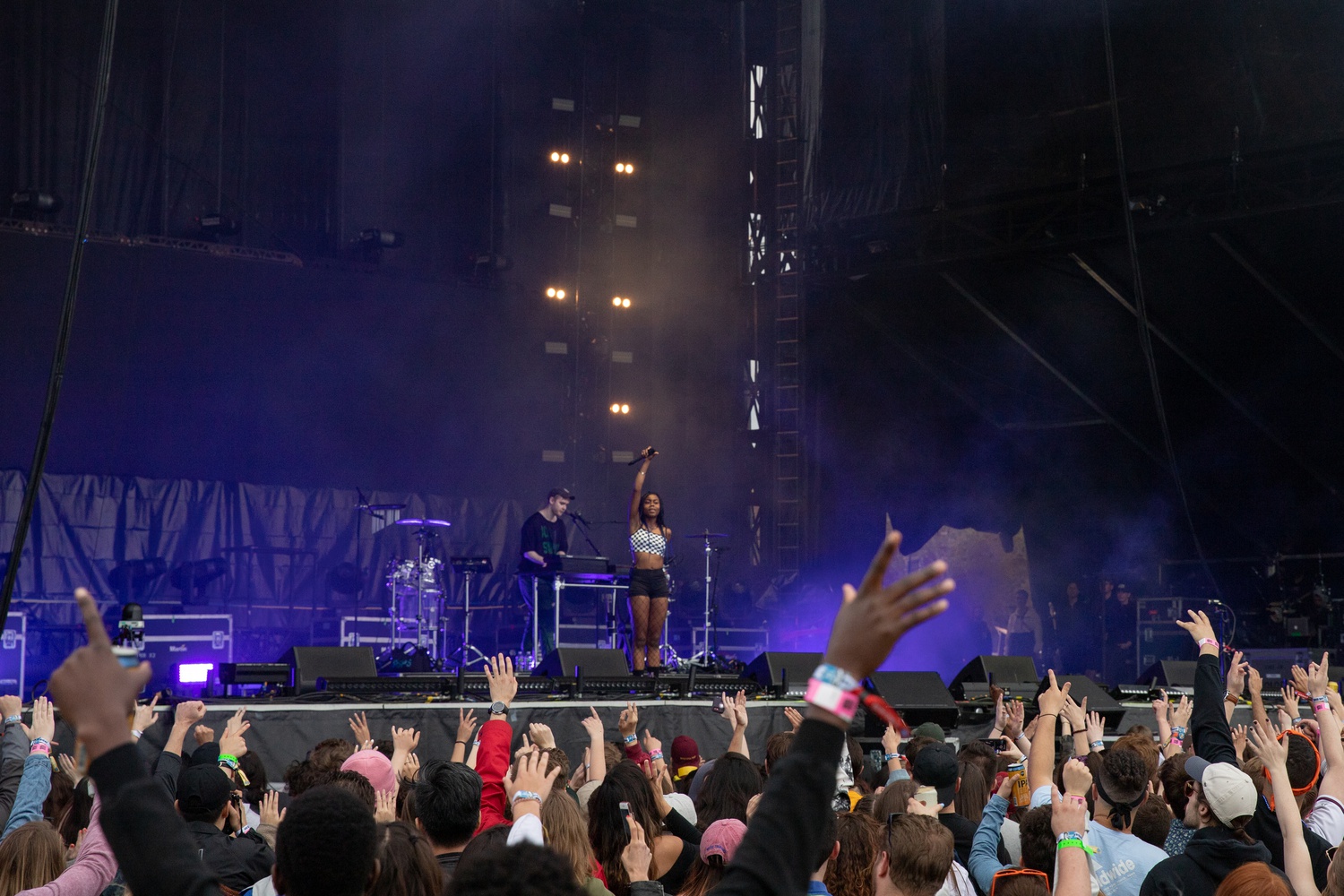 EDM songwriter and producer Mura Masa’s eclectic techno beats and melodies are often enhanced by other artists’ vocals, as is the case with his most popular track: “Love$ick,” featuring A$AP Rocky. At his Boston Calling performance on Friday afternoon, touring singer Bonzai, now known as Cosha, stole the show with her vivid stage presence. Mura Masa offered an applaudable performance with a series of coveted tracks, but in part due to his main role as an instrumentalist and DJ and in part due to a perhaps more stage-shy personality, he receded into the background while Bonzai made the show worthwhile.

Mura Masa rarely looked out at the audience, instead gazing intently at his drums or mixer. He remarked upon the show-biz expression “The show must go on,” explaining that everything was going wrong with the set on the green stage. Few would have noticed had he said nothing, making the interjection strange given that he said little else. Nonetheless, while the massive displays flanking each side of the stage zeroed in on him, he played percussion impressionably, immersed in his music.

Bonzai, featured on his tracks “What If I Go?” and “Nuggets,” exhibited vocal prowess in her range and ability hold notes endlessly, but was too heavily autotuned on tracks such as “1 Night,” whose original version features Charli XCX. Bonzai, a natural performer, affirmed her enjoyment of the power of the stage, her expression strained by heartfelt singing but always coming back to a smile. She danced incessantly in a style inspired by hip-hop and perhaps other genres like dancehall while whipping her braids and making use of the entire stage, bringing an energy unparalleled by other festival acts. As she sang “Are U There?,” she asked the right side of the stage, “Are you here with me?” and then the left, involving the audience seamlessly via the lyrics of the song without the irksome “How are you, Boston?” calls heard at too many festival sets.

Mura Masa’s electronic music style is complemented by beautiful production his music videos, such as the stereoscopic cinematography in “What If I Go.” The videos feature streetwear-clad young people across scenes of urban storefronts and subway interiors. His album cover art, such as that of his latest album “Mura Masa,” additionally accents a distinctive font and modernistic graphics. A horizontal display across the back of the stage flashed snippets of each track’s corresponding music video, sometimes artfully cropped and sliding across the display. Flashes of the song title in black on a white background, then inverted, accompanied “What If I Go” and “Love$ick” in Mura Masa’s signature print.

For the most part, Mura Masa’s live music as he drummed, played keyboard, and DJed remained faithful to its recordings. While Bonzai’s live singing was merited in most songs, it would have served certain songs better to have their absent artists’ recorded voices seep through. With songs like “Love$ick,” for example, it was abysmal for so little of A$AP Rocky’s voice to be included after the words “FT. A$AP ROCKY” lit the display. In the original, A$AP Rocky’s verses are what make the song as good as it is, and there would be enough content for an audience to appreciate in Mura Masa playing it in its entirety live. While Bonzai’s intonation and style mirrored that of A$AP Rocky as she sang Love$ick, it was lacking in the personality of A$AP’s rap. “Move Me” too could have been layered with a little more of Octavian’s rapping.

While Mura Masa’s performance was not particularly groundbreaking or unconventional, often settling into the role of accompanist for Bonzai’s vivacious performance, he offered a likeable show featuring his most notable discography.