From Boston Calling 2019: Big Red Machine Are Who They Are 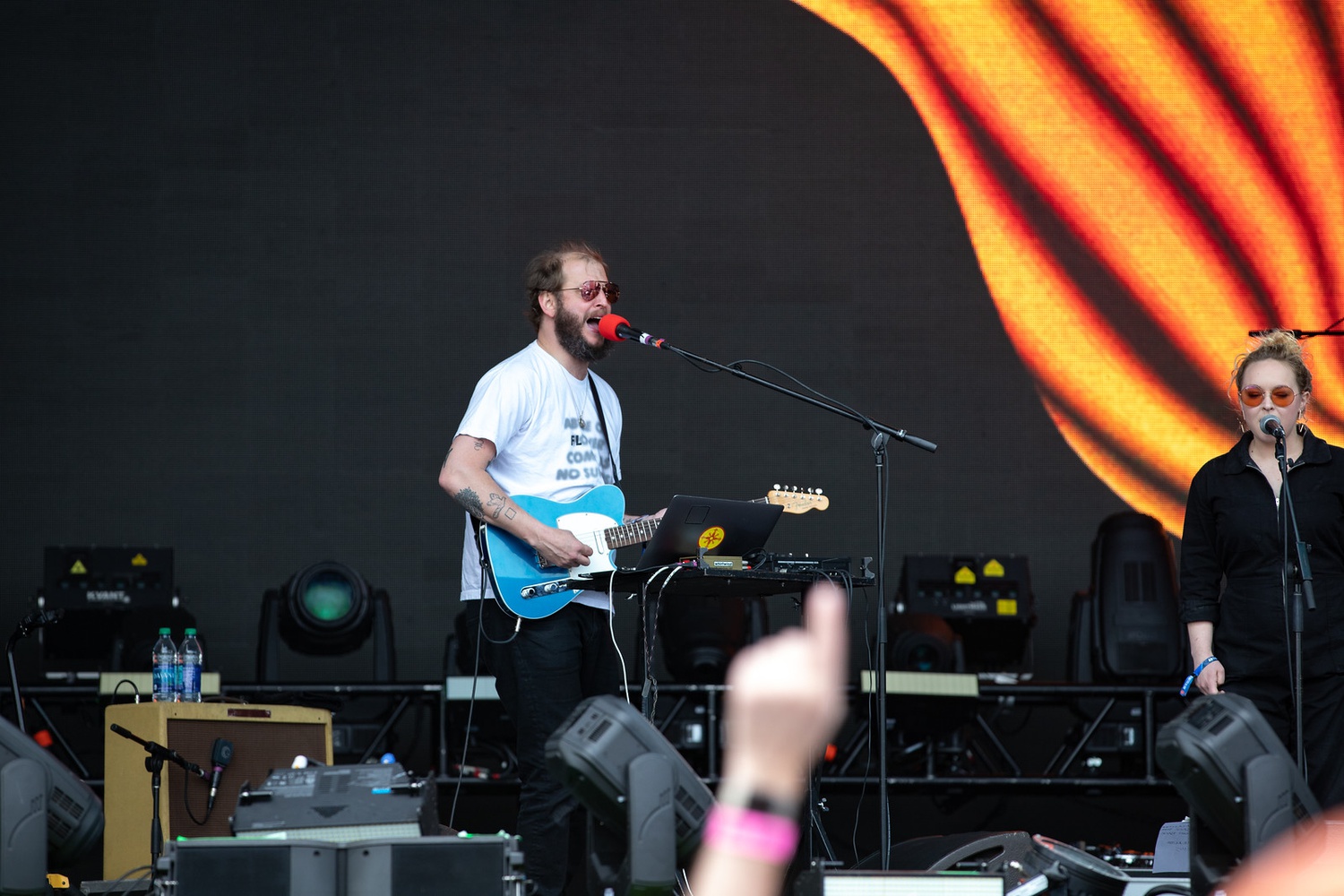 On set closer “Melt,” the members of Big Red Machine repeatedly yelled, “Well, you are who you are” to the crowd, signaling the end to a long journey but also the start of another. This mission statement of sorts acknowledged the band’s imperfections and rough edges while affirming their existence as a grand experiment.

Justin Vernon of Bon Iver and Aaron Dessner of The National founded the indie outfit as a collaboration for the Red Hot Organization’s “Dark Was the Night” compilation. Dessner forwarded Vernon an instrumental he titled “Big Red Machine,” a nickname for the dominant iteration of his hometown Cincinnati Reds. Vernon interpreted the title as a reference to the human heart and wrote his lyrics accordingly. For many artists, the story would have stopped after the release of the benefit album, but Vernon and Dessner kept in touch. Ten years later, as the story goes, there are now 10 songs between the two. They formally became Big Red Machine and released a self-titled debut last year under the PEOPLE collective, formed by Vernon, Dessner, and Dessner’s twin brother Bryan.

On stage, Big Red Machine was fluid and dynamic. Vernon often used a modulator to create a similar sound to his most recent Bon Iver album, “22, A Million.” Dessner alternated between playing guitar and piano. Not everything worked perfectly. Vernon’s lyrics at many points were indecipherable. Some knowledgeable fans kept singing along, some hummed the melody, and others made up their own lyrics. But whereas some bands lose their appeal in live performances when the words are lost, Vernon allowed listeners to take a step back and hear each composition in its entirety, focusing on each member’s unique contributions. That is a tougher listen, but arguably a more complete one.

When Dessner announced the band would play a few new songs, the crowd watched the artistic process take place in front of them. One of these songs, titled “I Can’t Be All You Got” — or “Langham,” depending on who you ask — was first released as a live improvisation from the band. Another new cut does not have a formal title, but fans christened it “Reese.” Sometimes this artistic process took a break, such as when the band members passed around a joint after “Langham.” But the band left much up to the listener, paradoxically creating a group bond that superseded individual tastes and perceptions.

In this light, naming the collective Big Red Machine makes sense. The differing interpretations from Vernon and Dessner on the meaning of that initial track signals the varying perspectives Big Red Machine encompasses. 40 people collaborated on the album, an aspect the band tried to replicate live by recruiting two Berklee students to play brass instruments. Everything the group does is open to interpretation. The “Big Red Machine” album cover may be a silhouette of a chest or, as some fans theorized, an ancient design of what the heart may look like. Impressionistic lyrics like “Well there ain’t no other other” from “Gratitude” and “Through the clock / There’s a way to go” from “OMDB” mean different things to different people. And that’s exactly the point. Fans looking for the soothing ballads of early Bon Iver or the darker portraits of The National should look elsewhere. Those aspects exist in Big Red Machine, but its unifying sonic theme is that there is no real theme, that different sounds will come together and interact in new ways. On the stage, this became clear through extended instrumental breaks that allow members to riff on different melodies. The flexibility of each performance becomes clear when Vernon aggressively points up or down to try different mixes in the middle of different songs.

Each cut sounds like its counterpart on the album on the surface, but Big Red Machine takes some songs in different directions. The album outro of “OMDB” is ethereal, but in Boston, it sounded much more grounded and dark, as Vernon aggressively shouted, “Over my dead body” over a cacophony of drums and guitar. “I Won’t Run From It,” one of the few songs with a genuine — albeit ever-changing — hook, became an opportunity for the audience to sing along with Vernon. Changes like these, along with Dessner repeatedly thanking the audience for listening, contributed to a vibe of experimentation and development.

The future remains unclear for Big Red Machine. This year’s 37d03d Festival — or PEOPLE upside down — in Brooklyn brought together many bands and collaborations, but Big Red Machine did not feel like the focus of the event. Dessner will eventually have to tour with The National for their new album, and Vernon announced new tour dates for Bon Iver. With grueling schedules and other ambitious projects, it seems unlikely Vernon and Dessner will have the time to devote to something as large as Big Red Machine on a regular basis moving forward. After all, this tour culminated over a decade of collaboration. But the new tracks leave the door open for more collaboration in the future, and the growing network of PEOPLE musicians entertains the possibility that the group will have new members moving forward. As they showed on the stage this weekend, Big Red Machine is more than the sum of its parts, even if those parts constantly change. They are who they are, but the ideals they stand for are something much bigger than themselves.