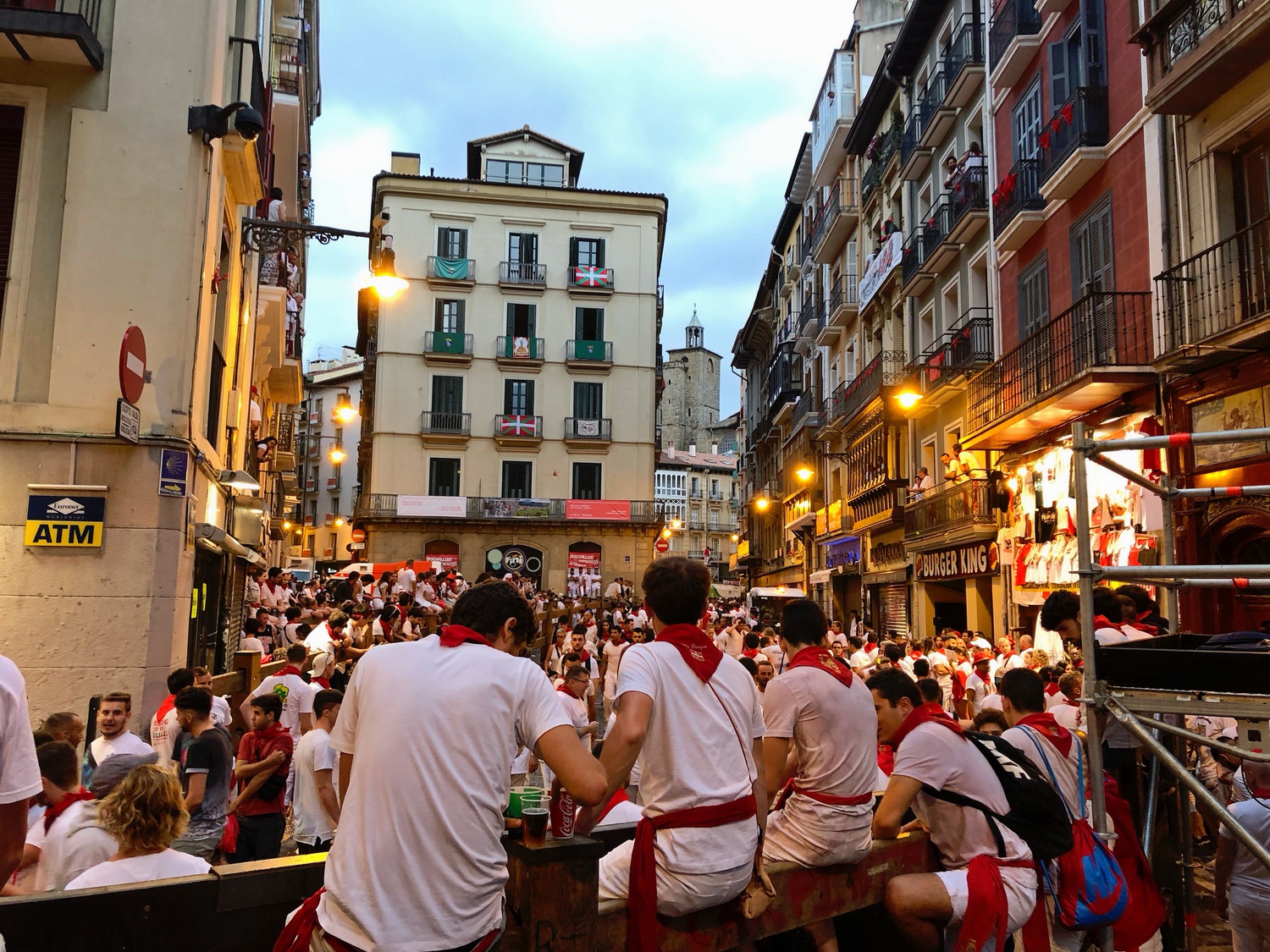 PAMPLONA, SPAIN – I thought I was dreaming at first. It looked like I was seeing the same person over and over again – a figure in white and red pressing through the darkness toward the city center. As the swaying passenger bus rocked me in and out of sleep, I realized that what I was seeing was not a glitch or illusion, but rather a crowd of people headed exactly where I was headed: to the running of the bulls in Pamplona.

My study abroad classmates and I have had little free time in Spain. Our program is only five weeks long, so the schedule is condensed and intense. In early July, however, we were granted one free weekend to travel wherever we wanted. Our free weekend happened to overlap with San Fermín, a week-long festival in Pamplona famous for its 24-hour fiestas, spectacular fireworks, and gory bull fights and bull runs.

We were told many times not to go to San Fermín. Online resources, host families, former students – all of them warned us that a weekend in Pamplona would be far from relaxing. Our program director refused to provide his opinion; he knew no matter what he said, we would go. Sure enough, 19 of us did, piling into a chartered bus at 3:30 a.m. to satisfy our morbid curiosity.

Pamplona was certainly different from the picturesque seaside towns and ornate urban spaces we had seen before. When we first stepped off the bus at 5 a.m., it was like we were thrust into a post-apocalyptic war zone. Mounds of litter clung to the sticky streets and clogged the gutters, and shards of broken glass glinted under the street lights. My group quickly learned that the tradition of wearing a red bandana around one’s neck was not only fashionable, but functional – the air reeked of urine and alcohol, and I had to cover my nose until I became accustomed to the heavy odor.

When we found our ideal vantage point along a sharp curve in the road, we defended it mercilessly. We clung to the fence bordering the street for two hours, watching the sun rise and closely guarding the Euros stashed in our pockets. At precisely 8 a.m., a rocket went off, signifying the release of the bulls from the corral. They came barrelling down Calle Mercaderes at a pace that made my heart thrum with fear.

And then they were gone. As the last bull disappeared from my line of sight, so too did my last reserves of energy. A wave of fatigue passed over my classmates, and their expressions changed from excited to jaded. We disentangled ourselves from the fence and trudged back to the bus in near silence.

“¿Valió la pena?” My host mother asked when I returned to my flat in León. (Was it worth it?)

I told her yes. I was telling the truth, I think. San Fermín satisfied the part of me that wants to try everything once. But that itch for novelty also makes me want to return to the festival as a runner rather than a spectator. There’s something alluring about the running of the bulls, even if it’s completely miserable, messy, and unethical in my eyes. There’s something remarkable about being a part of it all – being one small figure in the river of white and red.