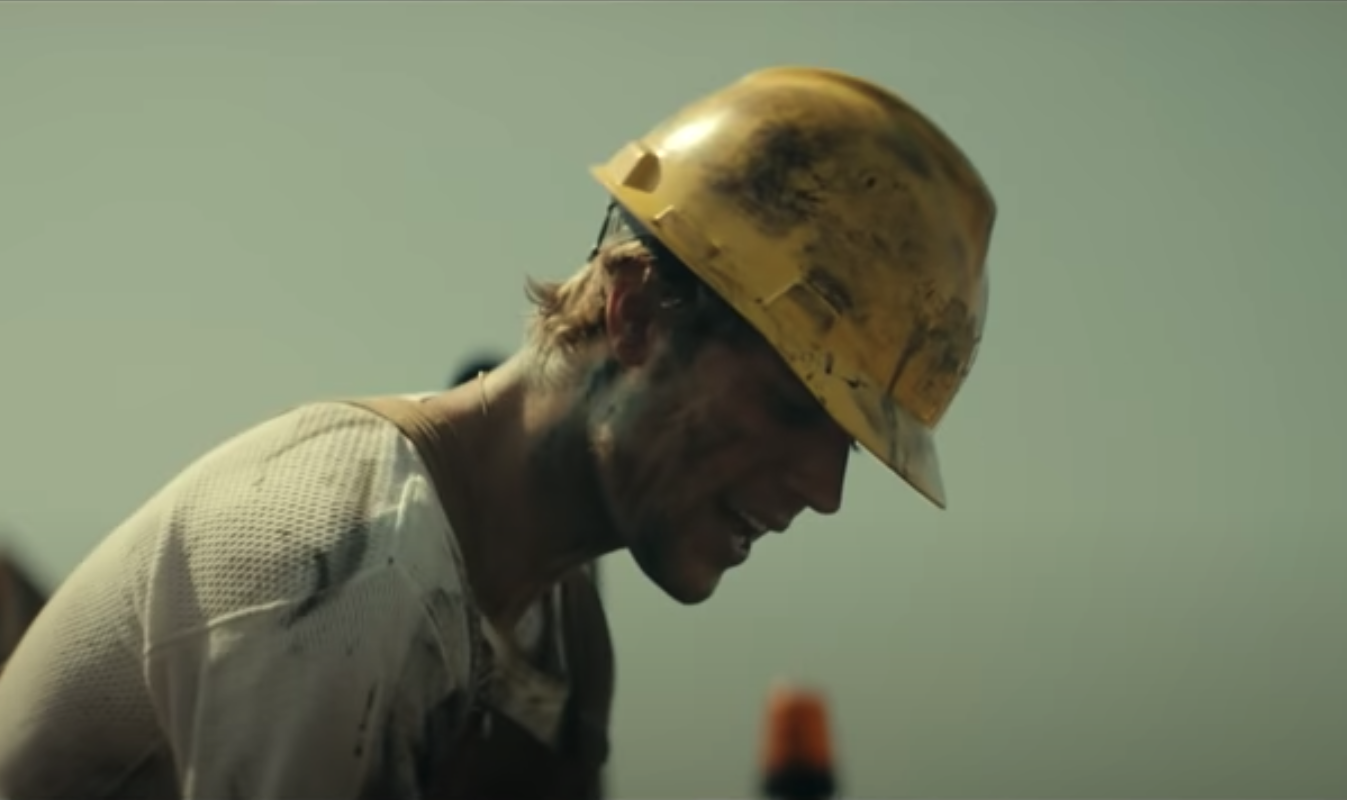 Bieber released the music video for the track on Sept. 17, and as if this year couldn’t get any more chaotic, the video tells a story that has absolutely nothing to do with the content of the song or Bieber’s own life. The opening shot sets the scene with a placard that says “Motel” on a bedside table, then fades to the title card: written in a biblically gothic font, transposed over the figure of Jesus Christ on a motel crucifix. It’s all a bit heavy-handed.

Bieber then wakes up in bed beside a woman who is definitely not his IRL wife, Hailey Bieber. He gets ready to embark on his workday at — get this — an oil drilling “plant” (as it is described by the foreman in a scene we’ll touch on shortly.)

In the next sequence, the camera pans in on the oil plant, giving off major “There Will Be Blood” vibes as it is bathed in an intense, sepia-toned wash. Cut to an incredibly greasy Bieber standing around, singing, whilst his coworkers extract oil. Seriously, he’s SO greasy: The video’s budget seems to have been redirected from narrative planning to the obscene amount of oil they smear on JB’s face to show that he really is just like your average fracker.

At this point, we’re given a glimpse of the warm, kindhearted nature of JB’s fictional paramour, who is caring for the elderly in a nursing home. It’s important to note that nobody at said nursing home is remotely taking coronavirus precautions. Instead, they are just playing Bingo and vibing — raising the question of whether this is a pre-COVID timepiece, a modern sans-COVID AU, or just an anti-mask propaganda piece.

This question becomes all the more ambiguous when JB’s foreman delivers the news that they are shutting down the plant due to the “current and ongoing global situation.” What other “global situation” could they be referring to besides the pandemic? Climate change, possibly? The ruination of God’s green Earth, spurred on by the very oil that JB was extracting only moments before? Or, more hopefully, is it a shift away from fossil fuels, potentially placing the JB “Holy” timeline in a universe after the upcoming election where Joe Biden wins and uses his influence to push for green energy?

We get no answers. The only conclusion is that the Justin Bieber “Holy” video is just a love letter to Exxon. Seriously, this reeks of Big Oil money. Is BP using this video to distract from their latest spill or something?

Don’t fret, because there’s more meat to this strange, holy-water-induced fever dream. As Chance the Rapper’s verse begins, he paces around a greenhouse full of dead plants, with Bieber sulking around behind him (perhaps another reference to the destruction of God’s boundless majesty?). The video then returns to the motel, where an overall-clad — and still super greasy — Bieber delivers the news to his partner that the plant is closing. His partner’s income from the nursing home is not enough to support the pair and they are evicted from their motel room — potentially a reference to the subpar treatment of healthcare workers in America? Interesting.

As Bieber’s oil worker caricature and his partner face homelessness, the problem at the heart of this portion of the video becomes obvious. Bieber’s essentially cosplaying poverty, egregiously misrepresenting and romanticizing its realities. It’s disheartening to see a global popstar with a huge platform, and exorbitant amounts of wealth, dress up in dirty clothes to play a homeless oil worker without actually providing any substantive commentary on poverty in America.

The pair continues to wander through town, down on their luck until a car pulls up beside them. And who is behind the wheel? Wilmer Valderrama, of all people, dressed in military fatigues. Valderrama shows them kindness and grace by inviting them home for “a warm meal.” Before you know it, they’re all headed to Valderrama’s house where it is revealed, through a tearful embrace with his family, that Valderrama’s army character has just returned from his deployment. That’s right, when Valderrama’s children first see their father after his service tour, he is accompanied by a (still greasy) Bieber and his (not Hailey) partner, both total strangers.

Charmingly, the family and the fictional Biebers enjoy the meal together. As they say grace and dine together, the final chorus rises and the video ends with a Hallmark-esque montage of the group laughing and eating, interspersed with flashbacks to Bieber’s oil drilling days. Heartwarming — like climate change for the soul.

Or at least it would be, if the video wasn’t so wildly random, utterly chaotic, and mildly offensive.

The song does kind of slap, though.

—Staff writer Joseph P. Kelly can be reached at joseph.kelly@thecrimson.com and on Twitter @JosephP_Kelly.

—Staff writer Harper R. Oreck can be reached at harperoreck@thecrimson.com and on Twitter @harperrayo.