'Grand Army, Coming to Enlist You'? In New Show, Netflix Toes the Line 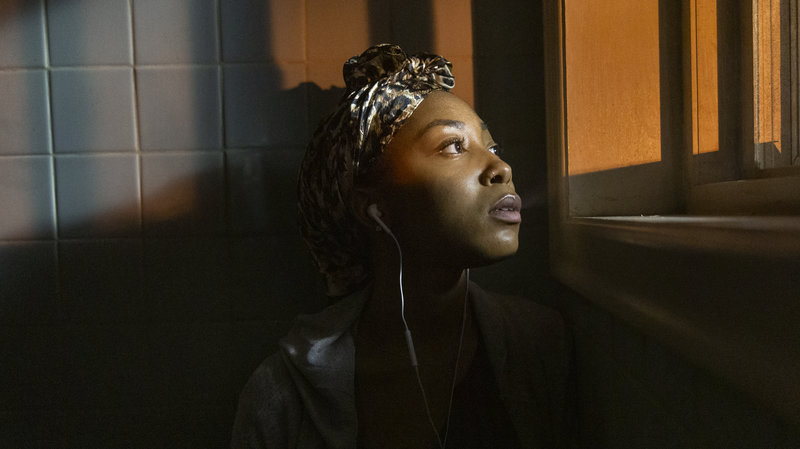 From its first scene, “Grand Army,” demands your full attention. Netflix’s new series about teenagers at a competitive New York City high school begins in the girls’ locker room, a microcosm of the show’s universe: crowded, grey-toned, and buzzing with energy and characters you might actually want to be friends with. The camera follows aspiring dance team captain Joey Del Marco (Odessa A’Zion) as she barges into a bathroom stall where Grace (Keara Graves) sits, weeping. Totally unfazed, Joey kneels on the floor, asks “are you ready?”, reaches up and, in a painfully drawn-out sequence, struggles to extract a stray condom from inside her friend. Miraculously, she succeeds, and the two hug in a genuinely endearing moment. The scene embodies the show’s greatest draw — a gritty, authentic portrait of teenage friendships (particularly between women) brought alive by a talented cast of young, mostly breakout actors.

“Grand Army” strives for this no-looking-away realism throughout its first season, making the show at once mesmerizing and hard to watch. While the show joins a growing cadre of “Euphoria”-core dramas exploring high school life, it replaces “Euphoria”’s sun-splashed, aestheticized vision of suburban adolescence with a claustrophobic, constantly-shifting vignette of life in the city. Its characters are (for the most part) compelling, charismatic, and complicated. Their friendships feel genuine and deep, drawing on years of shared history and loyalty as they navigate the school’s web of social groups and deal with its endemic racism and sexism. In short, the characters feel remarkably real — which is why the show’s sometimes extreme storylines, from a terrorist bombing in the first episode to a leaked college essay and, later, a confusing fake bomb threat, don’t drag “Grand Army” down as much as they could.

Though the show has a long lineup of supporting characters, it focuses on the struggles of five main characters: Dominique “Dom” Pierre (Odley Jean), an aspiring psychologist struggling to support her family while finishing high school; Siddhartha Pakam (Amir Bageria), a competitive swimmer grappling with his sexuality; Jayson Jackson (Maliq Johnson), a passionate saxophone player who protests against the school’s racist disciplinary policies; Joey Del Marco (A’Zion), a dancer and revered figure in the school until she accuses classmates of rape; and Leila Kwan Zimmer (Amalia Yoo), a lost freshman desperate to fit in. The show tracks all five stories, but Joey, Jayson and Dom’s emerge as the central plot points, grappling with systemic injustice, privilege, and disadvantage in moving, unexpected ways.

“Grand Army” is an adaptation of showrunner and writer Katie Cappiello’s play “Slut,” performed at the 2013 New York Fringe Festival. The show’s portrayal of sexual violence, specifically, is unique in the landscape of modern TV; it joins Michaela Coel’s groundbreaking “I May Destroy You” in offering a visceral, unflinching look at the aftermath of assault, social stigma, and dangerous versions of victim blaming by another name. At times, though, the show’s depiction of sexual violence feels gratuitous, going for dramatic effect rather than empathy towards survivors. While it’s important not to shy away from the devastation of sexual violence or to euphemize it, the scene in which the assault occurs is brutally drawn-out, while the show rushes past subtler opportunities to examine the creeping shadow of rape culture. For example, in the show’s first episode, the swim team makes a “Bomb P*ssy List” on Instagram, posting pictures of the women at Grand Army they most want to have sex with, but beyond some feeble criticism by a member of the team that doesn’t want his sister included, the plotline is largely forgotten and dismissed as a stupid bro-bonding experience rather than a symptom of the school’s pervasive rape culture.

As Joey deals with the devastating fallout of her assault, Jayson and his friend Owen (Jaden Jordan) face the school board’s punitive, biased disciplinary policies after a lighthearted prank against Dom turns serious. Jayson, given a shorter suspension than Owen, struggles to protest his friend’s exclusion, leading to a grim several episodes as their friendship fractures. Meanwhile Dom, whose grueling daily efforts to support her family come to light when Jayson and Owen’s prank costs her $200, struggles to stay afloat and maintain her studies.

As Dom and Sid advance towards their goals (although not without some challenges) and each navigate first love, Leila evolves from a nervous, sympathetic outcast to a perfectly-hateable villain. Seriously, her transformation from well-intentioned to delusional nightmare happens so fast it’ll give you whiplash — but it’s one of the show’s most unpredictable narrative choices, and it unfolds artfully. A jarring, seemingly unnecessary gag in which Leila imagines herself as a comic-book zombie queen gets explained in the final episode, revealing that what appeared to be a cutesy, empowering fantasy is actually a manifestation of Leila’s simmering toxicity. Even at her worst, though, she’s still recognizable as a completely misguided girl trying to fit in and feel desirable. This nuance traces back to Amalia Yoo’s gripping performance, which combines with A’Zion and Jean’s to make the show what it is.

However, as much as Grand Army may feel like a step in the right direction for teen TV with storylines focused on BIPOC and female characters, the behind-the-scenes dynamics of the show call into question its commitment to sincere representation. Cappiello, a white woman and former teacher who created the show based on experiences with students, was accused of racism in the writers’ room by several writers earlier this year. Ming Peiffer, one former writer for the show, said she and three other writers of color on the show left after Cappiello criticized one writer’s hair and refused to listen to their concerns that the show was becoming “poverty porn.” Indeed, elements of the show’s exploration of class and misogyny sometimes seem gratuitous — for example, Dom’s sudden decision to get married (as a high school junior) because the groom offers to pay her family if she helps him get a green card.

Ultimately, these elements of the narrative detract from the more subversive, interesting work that the show does to confront some of the problems facing teenagers in one of the world’s biggest cities. The series is part of Netflix’s greater efforts to expand the diversity of its storytelling and characters, a crucially important step towards equity in media — after all, as Joey says in her English class during Episode 4, “The world just can’t get enough of shoving white boy stories down our throats and labelling them as American culture at its finest.” This show is not perfect, certainly, but may be worth checking out for fans of “Euphoria,” “I May Destroy You,” and other interpersonal dramas grounded by strong female characters — so long as you know what to expect.