The Crimson hosts Rensselaer on Friday in a battle for a first-round bye in the ECAC playoffs. On Saturday, the team will entertain Union for senior night. 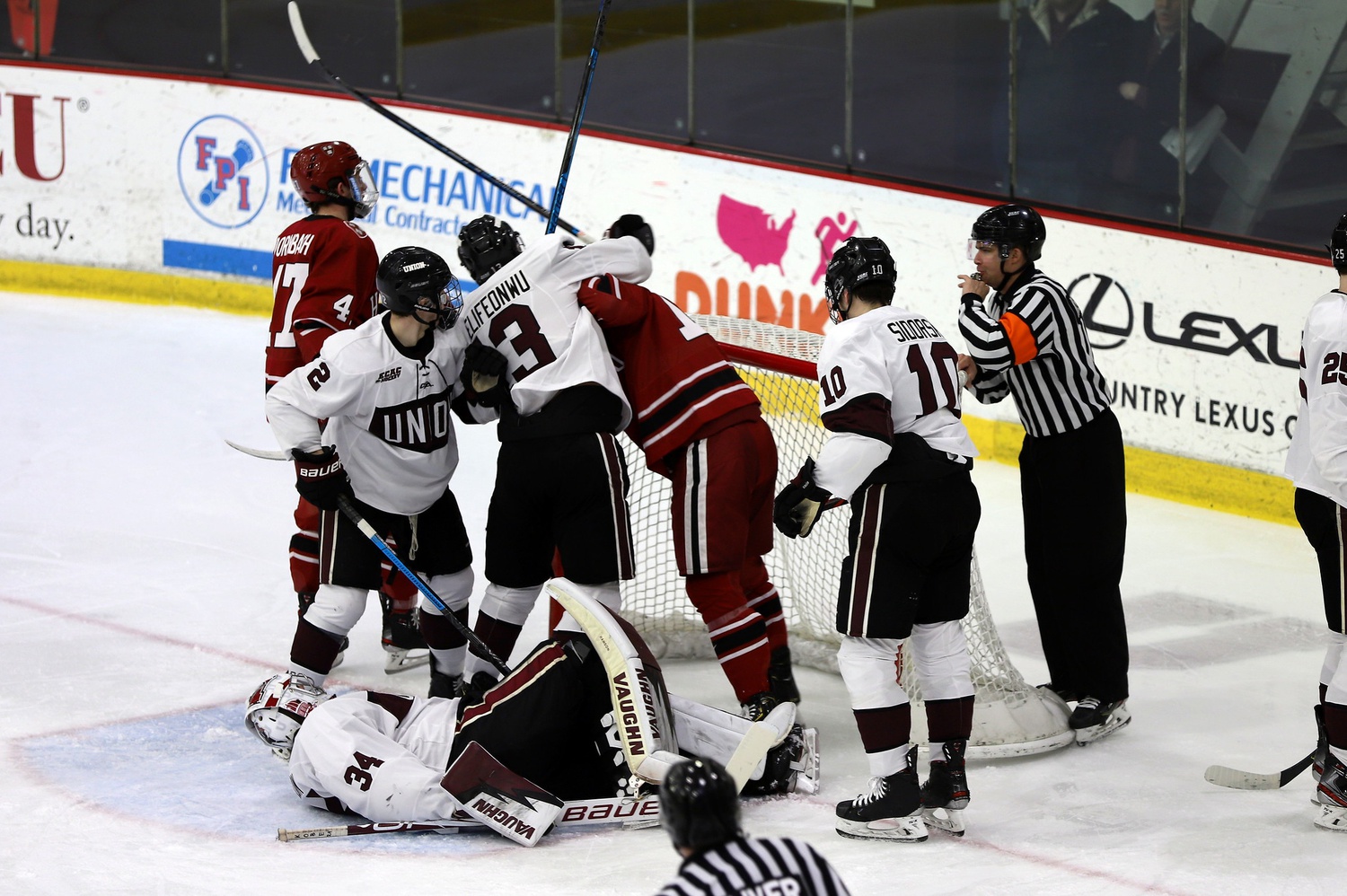 A late-January meeting between the Crimson and the Dutchmen got ugly quickly, as Harvard found twine six times in the second period. By Owen A. Berger
By Spencer R. Morris, Crimson Staff Writer

In its final home weekend of the regular season, the Harvard men’s hockey team will be playing for multiple reasons.

The Crimson (12-9-6, 10-5-5 ECAC) entertains Rensselaer (15-15-2, 11-8-1) on Friday with a top-four finish and first-round bye in the conference tournament at stake. A victory for the hosts would clinch a second-round berth in the ECAC playoffs.

Saturday, Harvard’s 29-game slate concludes against Union (7-21-4, 5-13-2). Following the affair, the program will honor its five seniors as they soak up home ice one last time in the regular season.

“It’s obvious what’s in front of us,” Crimson coach Ted Donato ’91 said. “To go into the final weekend having to win at home to get home ice and a bye is a good position to be in…. If anything, the stakes really help determine the focus.”

Harvard is fresh off its North Country road trip to adversaries No. 7 Clarkson and St. Lawrence. Despite what the rankings suggest, the Crimson skated past the Golden Knights but bowed to the Saints, making for an altogether confusing trip to Upstate New York.

Coach Donato’s group pocketed its most inspiring win of the year, only to kill the momentum it brought with a disappointing performance the following night. This level of inconsistency has in some ways defined the season.

What’s more: Harvard enters the weekend without a national ranking next to its name for the first time in 2019-2020. The team, which sat as high as No. 9/6 in late November, slid off the top-20 big board on Monday.

So on top of ECAC and senior-night stakes, the upcoming battles with the Engineers and the Dutchmen represent opportunities for the Crimson to get back on track ahead of the postseason.

“We know if we play our game, we can beat anyone in the country,” Harvard captain Nathan Krusko said. “In many aspects, it’s kind of comforting to know that we have the artillery and the weapons to do what we want to do at the end and accomplish our goals. But we have to understand that it comes with a price, and we have to be willing to pay that.”

In the squads’ previous meetings, the Crimson nabbed two points against both RPI and Union. A 6-3 triumph over the Engineers before Thanksgiving marked the final win in Harvard’s six-game streak to open the schedule — that which propelled it into the top 10. The Crimson’s high-end players buried key goals in the latter half of the bout, pulling the team ahead.

As the spring term began in late January, a trip to Schenectady, N.Y. resulted in a high-scoring outing at the Dutchmen’s expense. A whopping six second-period strikes stood out in Harvard’s victory.

Both opponents will be seeking vengeance this weekend.

“My first two years, we had the bye and home ice,” junior forward Jack Badini said. “We know how important it is to get the extra week of rest and get mentally ready for the playoffs. So that’s definitely our main priority [on Friday].”

Despite the ups and downs this season, as Krusko noted the Crimson wields several weapons that give it a chance to win every night. Notably, coach Donato has assembled the most dangerous forward line in the conference and arguably in Division I.

RPI and Union are quite familiar with the wrath of sophomores Jack Drury (17–15—32) and Casey Dornbach (11–22—33) and freshman Nick Abruzzese (13–24—37). This trio combined for six points in November’s ousting of the Engineers and a remarkable 12 in last month’s thumping of the Dutchmen.

In per-game terms — relevant due to stricter limits on games played for Ivy League teams — this line occupies three of the NCAA’s top 12 spots in scoring. Abruzzese leads all first-years in outright assists, points, assists per game (0.89), and points per game (1.37). 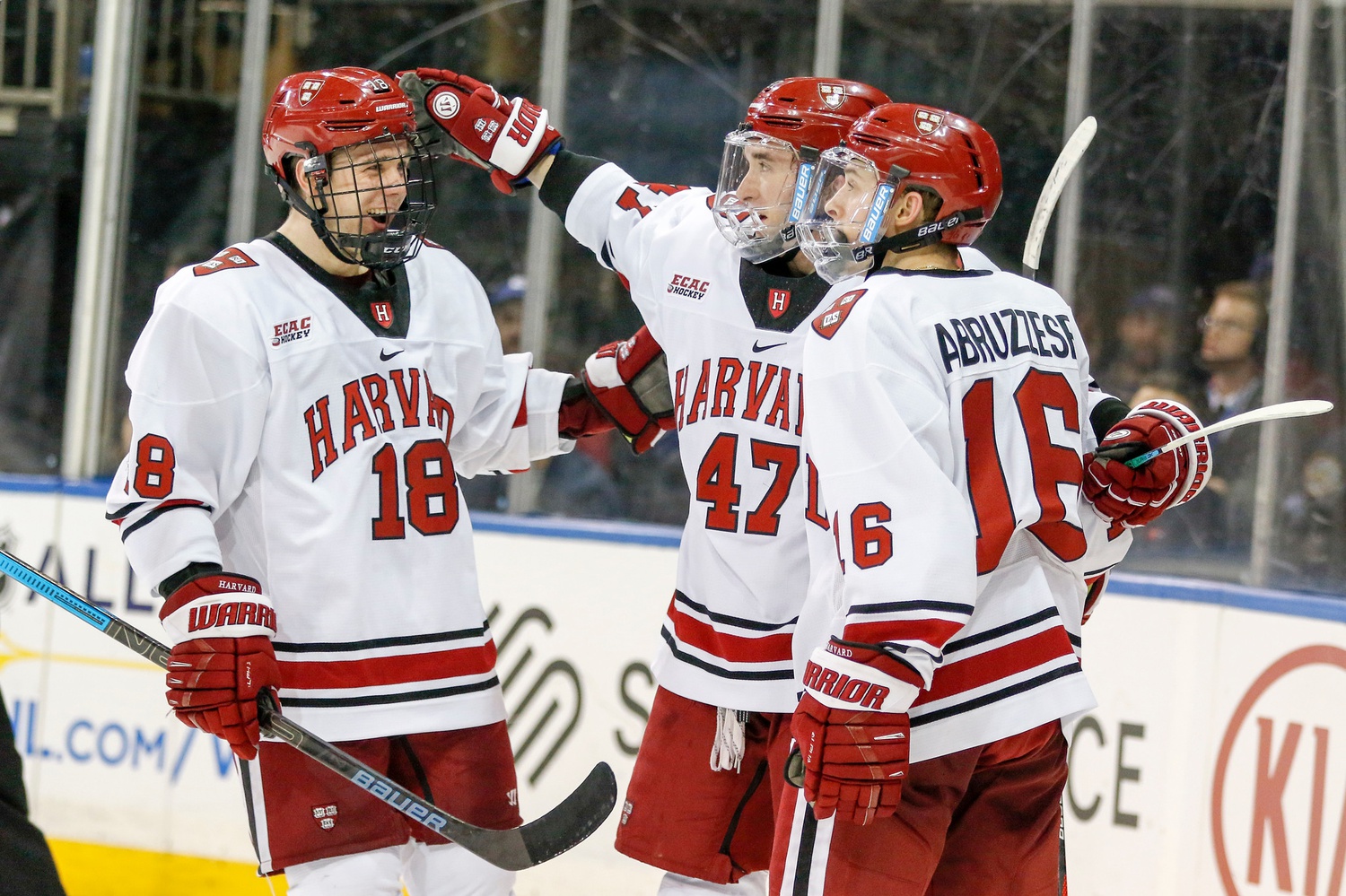 In the Crimson's prior matchups with Union and RPI this season, its top line has combined for 18 points. By Timothy R. O'Meara

Meanwhile, Dornbach has built on a stellar freshman campaign, in which he received ECAC Rookie of the Year honors, and is well above a point-per-game pace (1.22).

Drury (1.33 points per game), a precocious leader and reliable two-way center, has emerged as one of the league’s stars in 2019-2020. He is in an effective three-man race for ECAC Player of the Year with Abruzzese and Cornell’s Morgan Barron.

“It does definitely provide a sense of comfort that we have three tremendous players that, in all likelihood, are going to put up some points every night,” said Krusko, praising the Dornbach-Drury-Abruzzese line. “It inspires the other guys when they see them doing the right plays and when we can see them doing the hard plays as well. It pushes us, and it makes us want to be better and kind of match their level.”

In addition to Harvard’s potent triad, juniors Badini (6–8—14) and Henry Bowlby (6–7—13) provide top-end speed and can chip in offensively at critical times. Freshman John Farinacci (8–12—20) is another important piece up front and offers versatility as a natural centerman.

Additional scoring support comes from the back end in junior Reilly Walsh (5–16—21) and sophomore Jack Rathbone (6–20—26). Rookie Henry Thrun (3–16—19) not only moves the puck like his more senior defensive mates but also plays a commendably mature two-way game for a true 18-year-old.

Compared to the young Harvard roster, the Engineers will ice a top-heavy lineup on Friday. Forward Chase Zieky (7–15—22) headlines a group of six seniors clustered at the top of the team’s scoring leaderboard. Defenseman Will Reilly (8–11—19) and wingers Mike Gornall (5–14—19) and Todd Burgess (13–6—19), who potted four pucks last Saturday, are among these impact veterans.

With two wins this past weekend, including a shutout against ranked Quinnipiac, RPI has put the pressure on the Crimson. The Engineers sit just two points behind Harvard in the conference standings and could threaten for a spot in the ECAC’s top four by season’s end.

“[RPI] is a different team right now [compared to when we played in November],” coach Donato said. “They’re playing really well. Good on special teams. They have some big wins under their belt…. We’ve been in a position to get home ice and a bye here for several years in a row. We can’t be any less hungry than they are.”

Through 32 games, RPI has posted goals per game (2.78) and goals against per game (2.69) metrics that rank just above NCAA averages. The group’s .500 record reflects the narrow spread between these numbers. The Engineers’ powerplay is pedestrian, sitting at 41st in the country (16.8%), but their penalty kill is top-15 (.849) and should be formidable resistance against the Crimson’s nation-leading man advantage (31.2%) 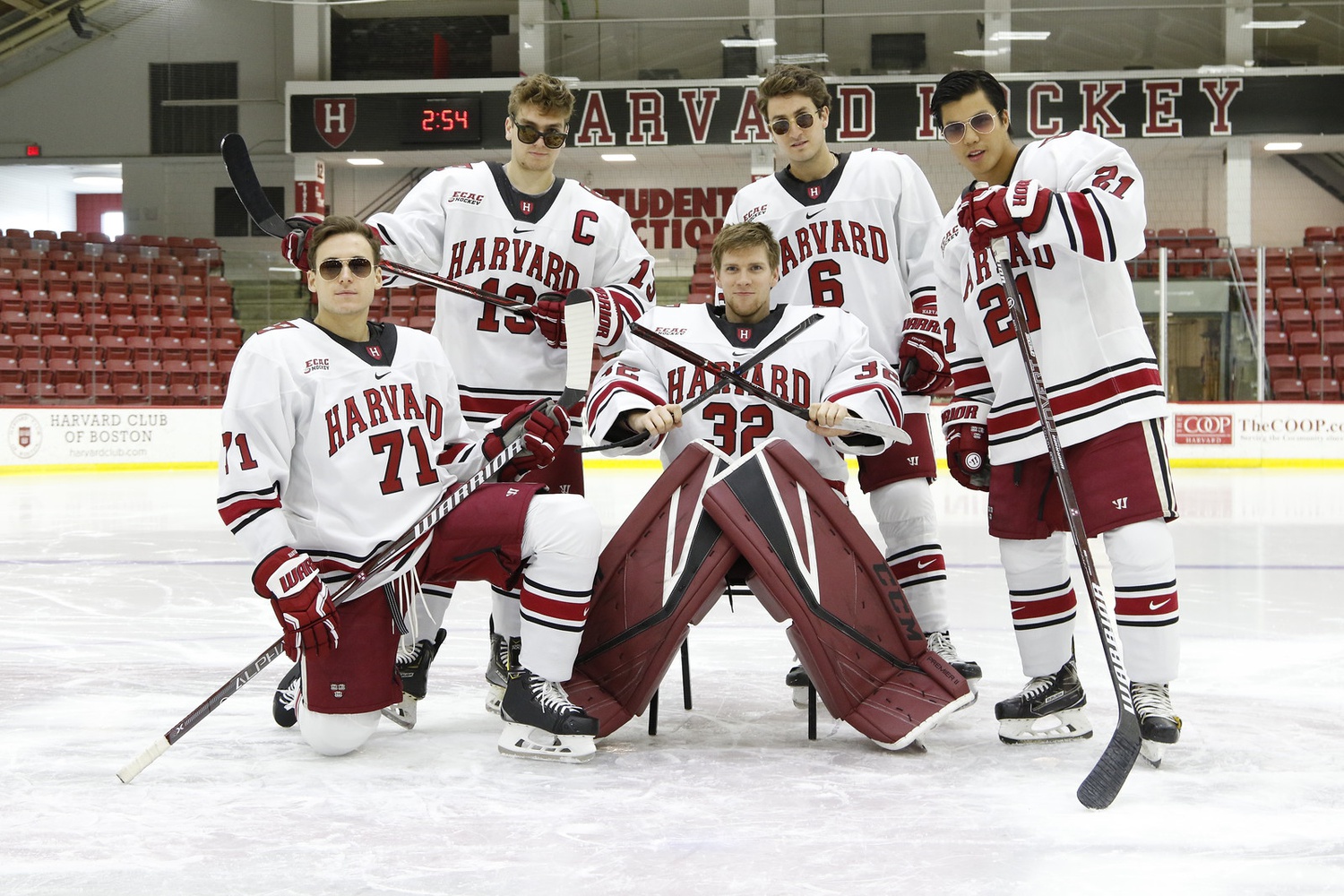 The class of 2020 will celebrate its senior night on Saturday. A class that entered as eight strong now has five players remaining. By Timothy R. O'Meara

The powerplay is a large reason why Harvard finds twine more often than all but four Division-I teams (3.70). In terms of goals against per game, however, Harvard is more porous than roughly two thirds of college hockey (2.96).

Saturday, the attention will turn to Union. With just seven wins on the year, this squad concedes more goals (3.03) and scores substantially fewer (1.81) than Harvard. In January’s matchup between the teams, the Dutchmen put up a respectable five tallies but simply could not keep up with the skilled Crimson, which cashed in eight times in the track meet.

Union is led by players at either end of the age curve. Among the forwards, senior Anthony Rinaldi (7–16—23) and freshman Gabriel Seger (6–12—18) pace the group. On the blue line, fourth-year Vas Kolias (2–10—12) and rookie Dylan Anhorn (5–9—14) are most prominent. All four of these key contributors inked the scoresheet in January’s loss to the Crimson.

“Any team can play, and everyone has a lot of skill and a lot of talent and can push at times,” said Krusko, reflecting on the takeaways from his group’s the last meeting with Union. “One thing we learned was the power of momentum. When we come out hot and we put a few goals on the board, we can push the pace of play. If we decide to take our foot off the gas, they have weapons, too, and they’re going to push it.”

After a four-month slog through the campaign, Harvard has just two games separating it from a yearly goal: clinch a top-four seed in the conference. This will undoubtedly be the team’s primary focus this weekend, particularly on Friday when the only remaining contender for the first-round bye comes to Cambridge. The Crimson currently holds a mere two-point lead over RPI for the final bye-week slot.

Regardless of the weekend’s outcomes, Saturday night the home team will celebrate the class of 2020, comprised of Gornet, Krusko, and fellow forwards Frédéric Grégoire, Colton Kerfoot, and Justin Szeto. A top-four ECAC finish would make the celebration that much sweeter.

“I can’t say enough good things about the class [of 2020],” coach Donato lauded. “[They’re] guys that have been around for some great success — been part of a team that’s gone to a final four, that’s won the ECAC, that’s won the Beanpot, won the ECAC regular season. It’s really a great group of representatives for the hockey program and the university as a whole.”