The Crimson will host the Saints in a best-of-three series as part of the first round of the yearly conference tournament. 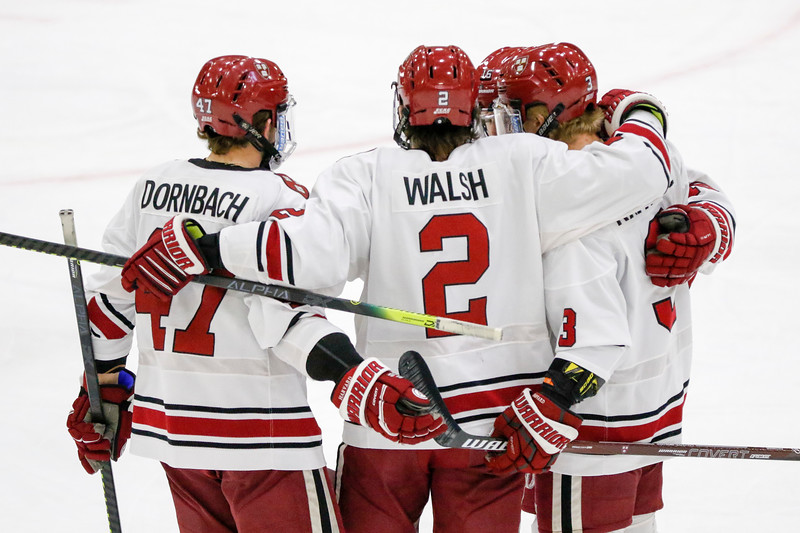 On Friday, the Crimson will skate in the ECAC tournament's first round for the first time since 2016, when it ran the table and won the Whitelaw Cup. By Timothy R. O'Meara
By Spencer R. Morris, Crimson Staff Writer

All year, college hockey squads keenly anticipate the postseason. But for the Harvard men’s hockey team, an extra week in between the regular season and the playoffs would have been okay.

After failing to clinch a top-four conference finish in the regular season, however, the Crimson (13-10-6, 11-6-5 ECAC) does not have the luxury of a first-round bye in the ECAC tournament as it has in the past four campaigns.

This weekend, Harvard will host St. Lawrence (4-25-5, 2-18-2) in a best-of-three series in the opening phase of the conference playoffs. If the adversaries split results on Friday and Saturday (7:00 p.m.), a Sunday matinee (4:00 p.m.) will decide which group moves on to the quarterfinal round.

While a bye week would have provided a much-needed mental reset as well as physical rest after a 29-game slate, the Crimson remains eager to continue the schedule.

“At this point, [the prospect of a bye week] doesn’t really matter,” said Harvard sophomore forward Jack Drury. “I think we’re all excited to play, and we’re looking forward to a good challenge.”

The last time the Crimson skated in the first round of conference play, it forged a path straight through the bracket en route to the NCAA Tournament. The goal will be the same this time around, as winning the ECAC playoffs is Harvard’s only remaining hope at qualifying for the big dance.

As the highest-ranked seed outside the top four, the Crimson has drawn the lowest-ranked opponent for its first-round matchup. The Saints have just two wins to their name after 22 ECAC contests during the regular season. The Canton, N.Y.-based program sits 58th among 60 Division-I teams in the Pairwise rankings.

Despite its status as a bottom feeder, St. Lawrence took an emotional game from Harvard toward the end of the 2019-2020 schedule. On senior night at Appleton Arena, the Saints overwhelmed the Crimson with physicality and energy, snapping a 21-game winless stretch comprising a majority of the season.

“It showed that they have a lot of good players,” said Harvard coach Ted Donato ’91 of the latest bout with St. Lawrence. “I thought their compete level was better than ours on that night…. They’ve been a team that has lost a lot of one-goal games, overtime games. So, they certainly have our attention, and we’re going to have to be at our best to be able to advance.”

The 6-3 affair knotted the season series, as the Crimson bested the Saints at its home Bright-Landry Hockey Center, courtesy of a prolific night on the powerplay.

The recent history between the first-round foes is impossible to overlook ahead of the weekend series. Not quite as recently, the teams last collided in ECAC the tournament in 2016, when co-captain Kyle Criscuolo ’16 sent his squad through to the final with an overtime tally.

The mid-March thriller marked the final career win for the decorated class of 2016. But coach Donato’s program continued its upward trajectory the following year, seizing the Whitelaw Cup as the conference’s postseason champion on its way to the Frozen Four.

In the two seasons since, however, Harvard’s ECAC title hopes have ended in the semifinal round, at the hands of the Saints’ nearby rival, Clarkson. This Friday kicks off the Crimson’s potential road back to Lake Placid, N.Y., currently where the annual semifinal is staged. Harvard has advanced to the historic hockey site in five consecutive campaigns.

“Other than being at home, everything else has to be earned [this weekend],” coach Donato said. “A team like St. Lawrence that plays really hard and competes physically should force us either to raise our level, or we’re not going to have the success we want.”

Of course, St. Lawrence will have a say in whether the Crimson can keep its impressive postseason streak alive. This will not be an easy task for Harvard, as the Saints play a physical game — one which matched up favorably against the comparably undersized Crimson lineup several weeks ago.

Aside from a statement victory at Harvard’s expense, St. Lawrence’s regular season was uninspiring. The Saints struggled to pot the puck all year, finishing 58th of 60 teams nationwide in goals per game (1.76). The other side of the ice also proved challenging, as the program sits 52nd in the country in goals against per game (3.47).

These averages pale in comparison to the Crimson’s goals per game (3.59), ranked fifth in Division I, and goals against per game (2.86), more pedestrian at 33rd. Yet, in the foes’ most recent clash, St. Lawrence found twine a season-high six times, bucking these trends.

The most troubling matchup for St. Lawrence, though, may be on special teams. Harvard brings its NCAA-leading powerplay (32.0%) to the series in its home barn, where the Saints will attempt to counter it with a 58th-ranked penalty kill (73.6%).

The Crimson wields a handful of offensive weapons who contribute to the lethal man advantage. Chief among them is freshman Nick Abruzzese (13–26—39), who is among the top five per-game scorers in college hockey (1.34).

Abruzzese’s running mate for most of his debut season has been Drury (18–16—34), whose timely goals and noticeable leadership have allowed him to emerge as one of the league’s most dynamic two-way forwards. Sophomore Casey Dornbach (12–22—34) has rounded out the dangerous top line more often than not in 2019-2020.

In 22 games playing together, the Abruzzese-Drury-Dornbach combination has united for 82 points this season (31–51—82). Whether this trio opens the upcoming playoff series together remains to be seen. A pair of disappointing losses to the Saints and Rensselaer — the team that usurped the Crimson for the final top-four spot last week — caused coach Donato to jumble the combinations up front.

“We have confidence in all our guys in the lineup,” said coach Donato when prompted on his forward lines. “If we have to make some adjustments during the game — whatever it might be — when it’s all said and done, to me it’s less about who guys are playing with and more about what kind of effort we bring and what kind of consistency we bring.”

On the back end, sophomore Jack Rathbone (6–22—28) facilitates on the powerplay and at even strength, owning the nation’s third-highest points-per-game mark among defensemen (1.08). Junior Reilly Walsh (6–17—23) and freshman Henry Thrun (3–16—19) are also key providers on Harvard’s blue line.

By comparison, St. Lawrence receives more balanced contributions, albeit less production all around due to the team’s scoring struggles. In late February’s six-goal rout of the Crimson, only two Saints notched multi-point performances. Were it not for the empty-net goal, all 13 skaters who got on the board would have pitched in just one point.

Sophomore forward Zach Risteau (7–15—22) paces the Saints roster in scoring, though Harvard held him scoreless in both meetings in the regular season. Juniors Bo Hanson (5–14—19) and Keenan Suthers (9–5—14) are other sources of production.

Along with 6’5” senior winger Alex Gilmour, the 6’8” Suthers gave the smaller, skill-oriented Crimson particular difficulties in the squads’ most recent tilt. Suthers missed the final two games of the regular season, but his status for this weekend is unknown.

“They come really hard,” Drury said. “They’re a big, physical team…. On our part, I think we have to match it: come with the same amount of physicality and energy and know that both teams’ seasons are on the line, so everyone is going to be going as hard as they can.”

For Harvard, a successful first-round weekend begins with a composed first period on Friday. In late February, St. Lawrence put the Crimson on its heels early with its energized play and senior-night crowd backing it. Thursday at practice, coach Donato stressed the importance of a solid start — one that will enable his high-octane Harvard group to dictate the terms against an opponent with a vastly different style.

“It comes down to the details,” coach Donato began. “Having everybody on the same page [is important], and making sure that we come out and start the game accordingly and don’t wait to see what they bring, but really come out and try to establish our game and persevere for however long it takes.”

If the Crimson once again is stunned by an underestimated competitor, the upcoming series could become a three-game slog between the old and new schools of ECAC hockey. A best-of-three win would give Harvard a chance to avenge last Friday’s defeat to the Engineers, who will rest this weekend along with Cleary Cup winner Cornell, second-place Clarkson, and third-place Quinnipiac.

“[In the regular season], I think we proved to ourselves that we can beat good teams, and we can play a really good game,” Drury said. “I think we know we have to be more consistent with it. We talked about using our speed a lot more, sticking to our systems a little bit more, and getting off to hot starts…. We want to carry that lesson into the playoffs.”