In Its Premiere, ‘Mrs. America’ is the Phyllis Schlafly Nostalgia Piece Nobody Needs 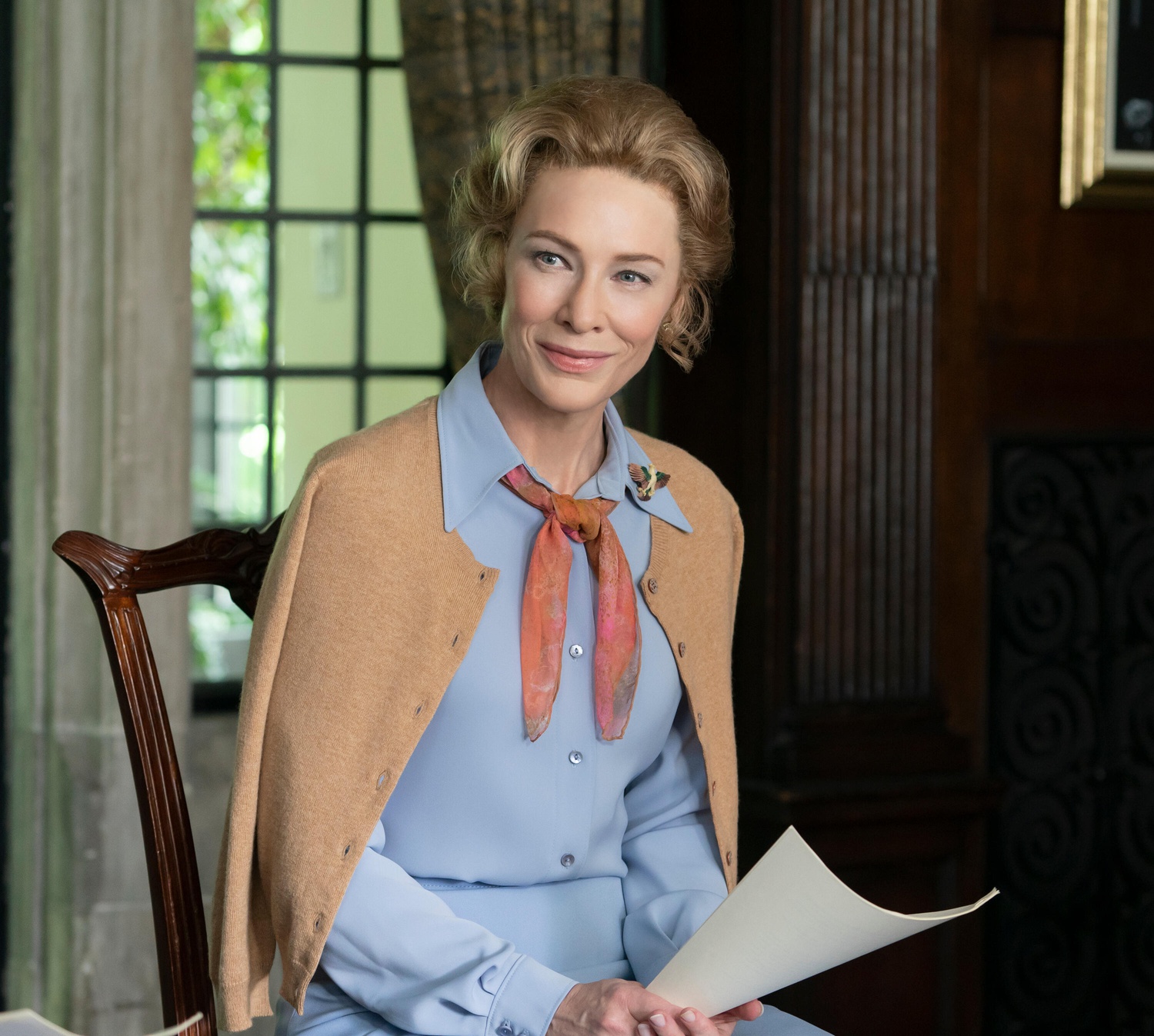 Phyllis Schlafly (Cate Blanchett) in episode one of 'Mrs. America.' By Courtesy of Hulu
By Harper R. Oreck, Contributing Writer

“Mrs. America” tells the story of Phyllis Schlafly, a conservative activist and writer whose grassroots campaign against the Equal Rights Amendment mobilized antifeminist women nationwide, ultimately preventing its ratification. It’s an immensely interesting historical moment, one wherein a conservative backlash movement rose up to counter second-wave feminism, making celebrities out of figureheads from both sides. The project of the show seems to be providing a “balanced” retelling of history rather than an honest one, and in doing so, it avoids criticizing Schlafly’s obvious hypocrisy and moral contradictions, while zeroing in on problems within the liberal feminist movement. In this sense, the show fails at providing a real glimpse of the historical moment — it focuses on a privileged group of elite women trying to prevent liberal change, yet never reckons with the real impact of their actions.

The show is superficially charming, drawing readers into an unlikely grassroots movement led by the calculating Schlafly (played, magnetically, by Cate Blanchett). Schlafly juggles her duties as a mother, society woman, and aspiring politician with robotic ease, cultivating an unnervingly cold charisma. The audience soon sees that even as she rails against the feminist movement, she struggles under the same strictures they’re working against — she’s ambitious and wants to become a political power player, yet she is constantly forced to minimize her goals to appease her husband and maintain her image as a good housewife. Blanchett’s Schlafly seems wracked with repressed rage — toward sexist male politicians, her dismissive husband, and her competitive fellow homemakers — in addition to being blatantly opportunistic. Viewers see that she disregards the ERA, preferring to write about national security, until she realizes that she can use the ERA to make a name for herself.

Blanchett gives a captivating performance, and the show’s stellar cast delivers nuanced characters across the board, portraying a refreshing range of interesting, complex women. The show’s elaborate sets and impeccable costumes make for an immersive viewing experience, ushering the audience into the show’s competing worlds — the pristine, preppy mansions of suburban homemakers and the gritty, bustling offices of feminist activists.

Ultimately, though, “Mrs. America’s” overt focus on the aesthetics of the era distracts from the radical right-wing substance of Schlafly’s work, romanticizing her as an unrecognized, unconventional political genius living in a fast-moving era of female empowerment. Eager to pull the reader into the cultural moment of the seventies, the show uses psychedelic rock songs to score scenes of Schlafly campaigning against feminist progress. Yet the real Phyllis Schlafly wanted nothing to do with the progressive artistic movements or music of the seventies and was actively working against the cultural moment to engineer a traditionalist backlash. The show’s preoccupation with groovifying her reactionary movement seems forced and unrealistic.

Further, in building Schlafly up as a feminist antihero, the show simplifies and glorifies her origins, portraying her as a lifelong housewife with political ambitions who miraculously creates an underdog movement. In reality, at the time of her work against the ERA, she wasn’t simply a onetime failed Congressional candidate — she had written a bestselling book in support of Barry Goldwater’s presidential campaign, run for president of the National Federation of Republican Women, and founded a national Catholic anti-Communist organization. “Mrs. America” ignores her connection to established conservative groups and networks to portray her as a kitchen-table organizer, building a movement by humbly typing her homemade newsletter and hosting meetings in her cutesy, pastel-toned living room.

The show buries the reality of Schlafly’s work behind a facade of suburban pageantry and glamorized appearances, painting anti-ERA advocates as earnest housewives rather than naive agents of misogyny. Their tactic of sending homemade loaves of bread to male lawmakers (“from the breadmakers to the breadwinners”) to encourage them to vote against the ERA is portrayed as a stroke of genius rather than the self-denigrating reversion to antiquated gender roles that it is.

Further, Schlafly and her friends are depicted as dedicated housewives, underappreciated by feminists and their husbands alike — yet in the background of their conversations, Schlafly’s housekeeper, a working-class Black woman whom Schlafly routinely disrespects, does the unglamorous work of maintaining the household, caring for the children, and preparing meals. The show subtly hints at the hypocrisy of this setup — but considering that the show is overtly on-the-nose in other regards, such as in its depiction of the sexism Schlafly faces from men, this weak mention of the issue is not enough. Again and again, the show tries to humanize Schlafly and her fellow conservative white women by portraying the difficulties they face in a misogynistic society — meanwhile, their comfortable, sheltered lives are propped up by unseen working-class people who couldn’t afford to live the stay-at-home life Schlafly promotes. Their deeply sheltered outlook is only pointed out in passing by feminist figures like Gloria Steinem (Rose Byrne), whose movement the show is eager to criticize as divided and ineffectual.

“Mrs. America” skirts around the sensationalist Schlafly and her cohort’s rhetoric, only occasionally (and lazily) questioning her baseless claims that the ERA would get women drafted into the army and end alimony. The show’s liberals only defend the bill by saying it’s basically symbolic. The show, then, implies that Schlafly’s victory over the ERA only deprived America of another symbolic law, rather than killing an amendment that would have prevented sex discrimination in marriage laws and outlawed gender discimination in the military, among myriad benefits that might have come from a decree of equality.

Furthermore, “Mrs. America” tries to portray Schlafly as a pragmatist who looks down upon racist southerners in her organization. While the real-life Schlafly was indifferent toward civil rights issues, she repeatedly allied with racist lawmakers like Senator Sam Ervin, a notorious Jim Crow advocate, hardly making her an advocate against racism within her political circles. Later in her life, she went public with a series of political opinions that reveal that she wasn’t just saying what she needed in order to achieve her goals; she was a genuine right-wing idealist who spoke out against gay marriage, immigration, abortion, the concept of marital rape, and even U.S. participation in the United Nations.

The underlying logic of the show is that Schlafly was a smart woman facing ubiquitous sexism, so STOP ERA was unfortunately (but reasonably!) the only way for her to get ahead. She found a creative, if not unsavory, way to succeed in a man’s world — and isn’t that understandable, perhaps even impressive? The answer is no. This apologist logic could be extended to any number of horrifically destructive historical leaders — but to what end? No amount of context can justify Schlafly’s destructive agenda.

“Mrs. America” is impressively acted and designed, with stars delivering moving performances in beautiful sets. Its competence, however, can’t save it from the filmmakers’ alienating eagerness to find the likable qualities in Schlafly, ignoring the real damage she did.