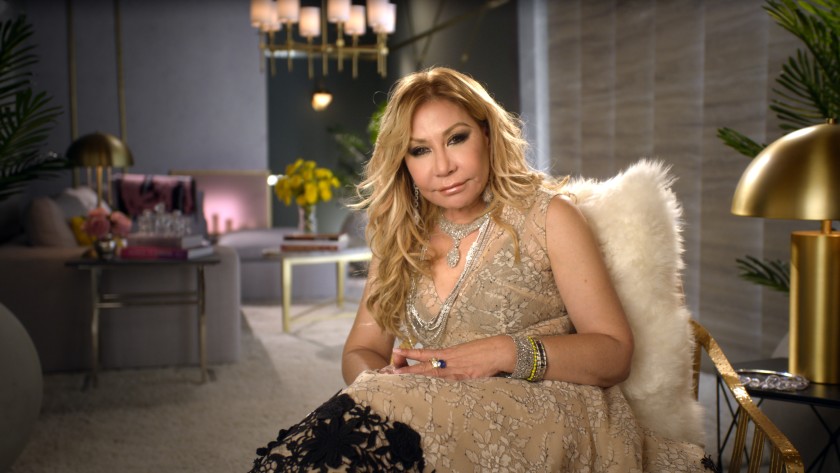 Anna Shay in "Bling Empire." By Courtesy of Netflix

“Bling Empire” premiered at the perfect time — right at the end of “Keeping Up With the Kardashians’” seventeen-year reality TV reign. Just when audiences were beginning to wonder where they’d turn to get their fix of rich people problems after 15 seasons of the Kardashian Klan, “Bling Empire” dropped and became an immediate sensation, putting “KUWTK” and its predecessors to shame.

Set in sunny Los Angeles, “Bling Empire” is shot like a typical reality television program, with events from the cast members’ daily lives interspersed with interview footage. “Bling Empire” is much more visually gripping than your average reality show, however. The footage is beautiful, with lavish shots of sunsets and palm trees, and sets like the cast members’ pristine mansions are easy on the eyes, to say the least. The cast members dress up in outfits that reflect their personalities for their interviews and sit in what looks like someone’s well-decorated living room, making the shots feel more intimate, as if they’ve come out of a documentary. This, coupled with the lavish beauty the cast members surround themselves with in their daily lives — glittering diamond-encrusted necklaces, sparklingly clear pools, beautiful views from a private jet — makes watching “Bling Empire” an aesthetically immersive experience.

Out of all the main cast members, Kevin Kreider is the only non milli-or-billionaire. He views the world of “Bling Empire” like most members of its audience do — with incredulity. He is shocked to learn the price of a pair of Dior sneakers, and even more shocked when he learns a friend’s place costs $19,000 a month (when Kevin tells his friends he pays $1,100 a month in rent, influencer Jaime Xie disbelievingly replies, “That’s not even a pair of shoes!”).

The loveable multi-millionaire Kane Lim is the omniscient narrator of sorts in the show, his interviews revealing the backstories and gossip on all of the cast. He loves shopping and boasts a wall-to-wall collection of impressive shoes, and despite his immense wealth (his family owns a number of shopping malls in Asia), he is one of the most down-to-earth members of “Bling Empire.” A practitioner of Buddhism, he acts as the peacemaker of the group and goes out of his way to support his friends.

Despite what the covetous Christine Chiu thinks, the indisputable queen of the friend group and of “Bling Empire” itself is Anna Shay, billionaire weapons heiress who, according to cast member Kelly Mi Li, travels to Paris more times in a year than she travels to Silver Lake. At 60 years old, Anna is the oldest and wisest of the clan, always ready to dole out sage advice, all the while bedecked in exclusive high jewelry.

Speaking of jewelry, two of the main conflicts of the show’s first season revolve around Louis Vuitton necklaces and... a penis pump. In one episode, Christine Chiu, name-dropping co-owner of Beverly Hills Plastic Surgery, Inc. decides to wear an exclusive Louis Vuitton necklace to Anna’s party, knowing that Anna owns a similar one. As a result of Christine’s slight, Anna relegates Christine’s place-setting to the end of the table at dinner, setting off a season-long chain of battles in an escalating social war. The penis pump incident occurs when Kim Lee, famous DJ, discovers said pump while snooping around Anna’s bathroom and throws it out the window in the middle of a backyard spa day. Anna is understandably unamused.

For all of the ways in which it is vastly out-of-touch, the show is oddly compelling.

After finishing Season One, I found myself starting the series over again almost immediately. Despite the grandiosity of it all, “Bling Empire” feels profoundly real. It isn’t all sex toys and sapphires — we watch Kim go on a search for her biological father, while Kevin, who was adopted from Korea, undertakes a similar mission. We learn about the pressure placed on Christine to produce a male heir for her husband’s dynastic family (Gabriel Chiu is the 24th generation direct descendant of the Chinese Song dynasty) and the medical difficulties that ensue. We watch couples fight, make up, and go to therapy sessions. Even though the cast members live oceans away from their home countries, the cast members remain fiercely and proudly connected to their heritages in a way that hasn’t always been represented in reality television. They throw Chinese New Year, Moon Festival, and Singapore Day parties, and regularly spend time learning from each others’ parents.

Maybe the realness of “Bling Empire” comes from the confidence with which the cast members wear their wealth. Unlike the nouveau riche Kardashians, whose status is wholly dependent on their fans for so many years, the members of “Bling Empire” (barring Kim Lee) are not famous, nor beholden to Instagram likes and the whims of fans. They have grown up in this life, and they wear it with ease. Or maybe the success of “Bling Empire” can be chalked up to the desire for escapism in a time of endless uncertainty — right now, who wouldn’t want to be able to take a private jet to Paris just to go to dinner?

— Staff writer Ajibabi O. Oloko can be reached at ajibabi.oloko@thecrimson.com.