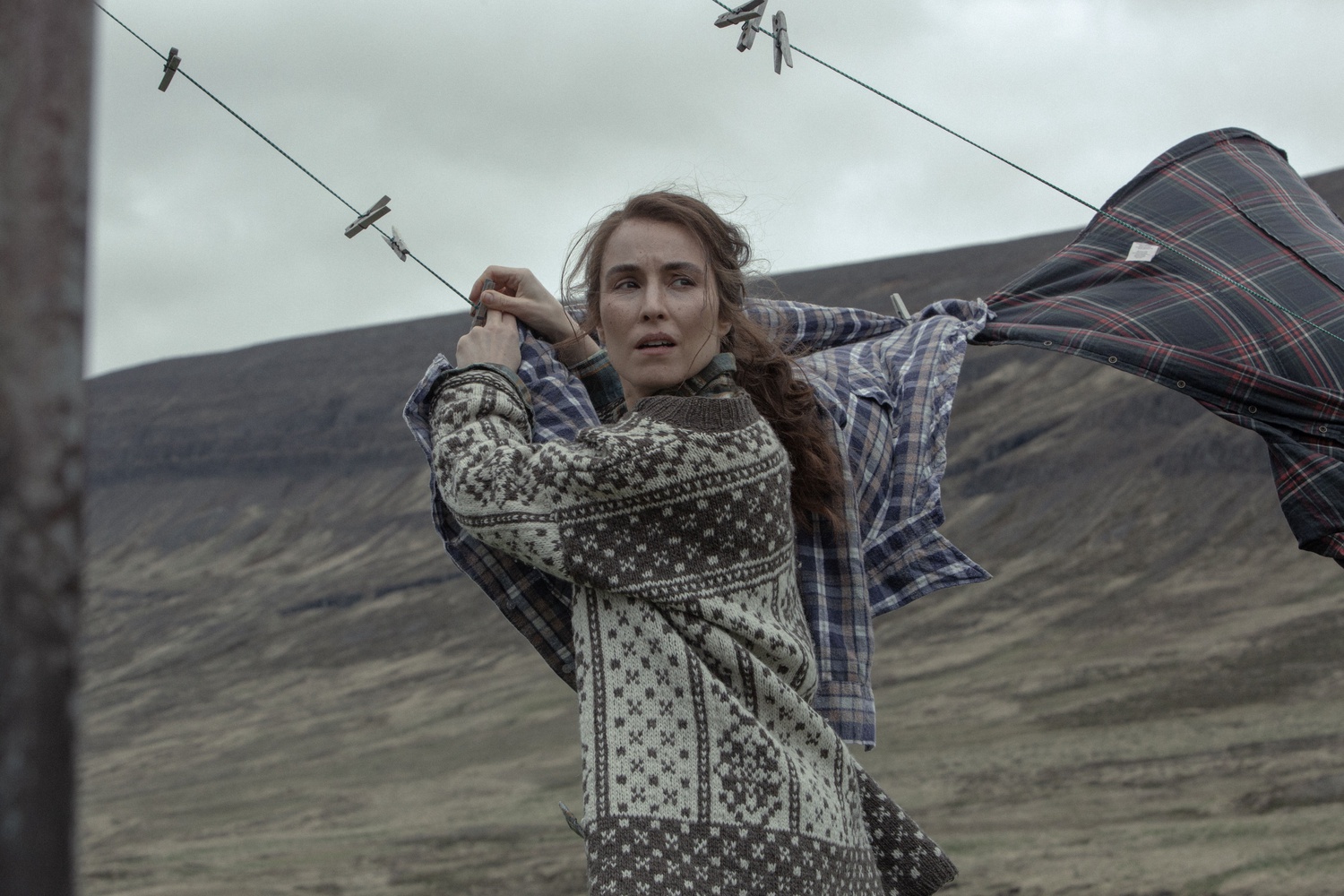 Naomi Rapace stars as Maria in "Lamb" (2021), directed by Valdimar Jóhannsson. By Courtesy of A24
By Jaden S. Thompson, Crimson Staff Writer

So begins the first substantive exchange between husband and wife Ingvar (Hilmir Snær Guðnason) and Maria (Noomi Rapace) in the A24 horror film “Lamb,” directed by Valdimar Jóhannsson. In a story that examines how we cope with loss, this conversation is a thought provoking and fitting way to start the film. The central characters are grieving, and though it goes unsaid, they undoubtedly wish they could go back to a time before their loss irrevocably changed their lives. “Lamb” follows the couple as they take in a human-lamb hybrid to raise as their own child. The narrative slowly unfolds into an unsettling, often bizarre exploration of grief and the fraught relationship between humans and nature. While compelling in its concept and technically impressive in its filmmaking, “Lamb” ultimately leaves viewers more baffled than contemplative due to a screenplay that leaves far too much terrain unexplored.

The film is divided into three chapters, the first of which shows Ingvar and Maria listlessly completing mundane tasks on their farm in the isolated Icelandic countryside. Heavy silence fills the air as static shots linger on them tagging sheep or doing household chores. An unspoken sadness is palpable, and though this exposition is lacking in excitement, it effectively conveys their stilted relationship with grace and subtlety.

Not long into the film, their quiet heartbreak gives way to unbridled joy when a sheep on their farm gives birth to a very unique lamb. Ingvar takes a crib out of storage and sets it up next to their bed; Maria tenderly cradles and feeds the baby, singing her lullabies. One might initially assume that the film is straying into the genre of psychological horror: perhaps Ingvar and Maria are projecting human characteristics onto a normal lamb because they want so badly to have a baby. But the anthropomorphic lamb — they name her Ada — is no figment of their imagination. She is revealed to be bipedal with arms, legs, and a lamb’s head; she can understand them, but can’t speak. The main tension of the film comes from the fact that Ada’s biological sheep mother wants to get her back from Ingvar and Maria.

“Lamb” is a bewildering and often jarring portrayal of an unconventional family; it’s quite the mental hurdle to take them seriously, and viewers might even be compelled to laugh at some of the couple’s interactions with their new daughter, whom they clothe and treat like a human. What makes her presence more uncomfortable than intriguing is the fact that the script fails to give us enough information on Ingvar, Maria, and Ada. The death they’re grieving is only fleetingly acknowledged, and we never learn anything more about their past. They communicate almost exclusively in cryptic sentences. When Ingvar’s brother Petur (Björn Hlynur Haraldsson) comes to stay with them and demands to know what’s going on, Ingvar simply replies with: “Happiness.” Throughout the film, Jóhannsson frequently centers the camera on the backs of his protagonists, their expressions obscured from viewers. Perhaps he is trying to communicate more by saying less, but ultimately this approach just makes it harder to sympathize with the couple.

While the story isn’t always easily believable, the film is consistently remarkable in its aesthetics. Carefully framed, intimate shots of the family at home are interspersed with sweeping wide shots of rural Iceland. Although the weather is perpetually bleak, the countryside is breathtaking: Snow capped mountains are situated in the distance, a picturesque stream bubbles loudly nearby, and a thick, omnipresent layer of mist enigmatically shrouds the entire area. The sinister beauty of the setting is perfect for a horror film, but despite its categorization as such, “Lamb” never truly instills fear in its audiences. Sure, it’s sometimes eerie with Jóhannssons’s use of painstakingly slow zoom-in shots, or the drone-like score that seems to indicate an unknown presence looming nearby. But the film is more of a supernatural family drama than anything else, set against the backdrop of the mundanities of everyday farm life.

For the most part, nothing too thrilling happens in “Lamb” after Ada is adopted. The arrival of Petur, the black sheep of the family (no pun intended), allows us to learn a bit more about Ingvar and Maria, but not enough to feel like we really understand them. However, the dynamics between these three family members feel authentic thanks to the natural rapport they have with each other. (A scene where they all dance to a VHS tape of an 80s-style music video that Petur made in his youth is especially memorable.) Moreover, Noomi Rapace stands out with her portrayal of Maria. She is often able to convey her character’s emotions without even speaking; a single glance or longing gaze is enough, always understated but still penetrating.

While the acting and cinematography are commendable, “Lamb” remains a mystifying film in its unexplained weirdness. Perhaps it intends to make social commentary on how humans feel entitled to exploit nature for their own personal gain. Maybe some people will leave the theater pondering their relationship with the natural world; no doubt others will leave thinking, “What did I just watch?” Still, in its bizarre and eerie originality, you can’t deny that it does, in fact, leave you thinking.

— Staff Writer Jaden S. Thompson can be reached at jaden.thompson@thecrimson.com.