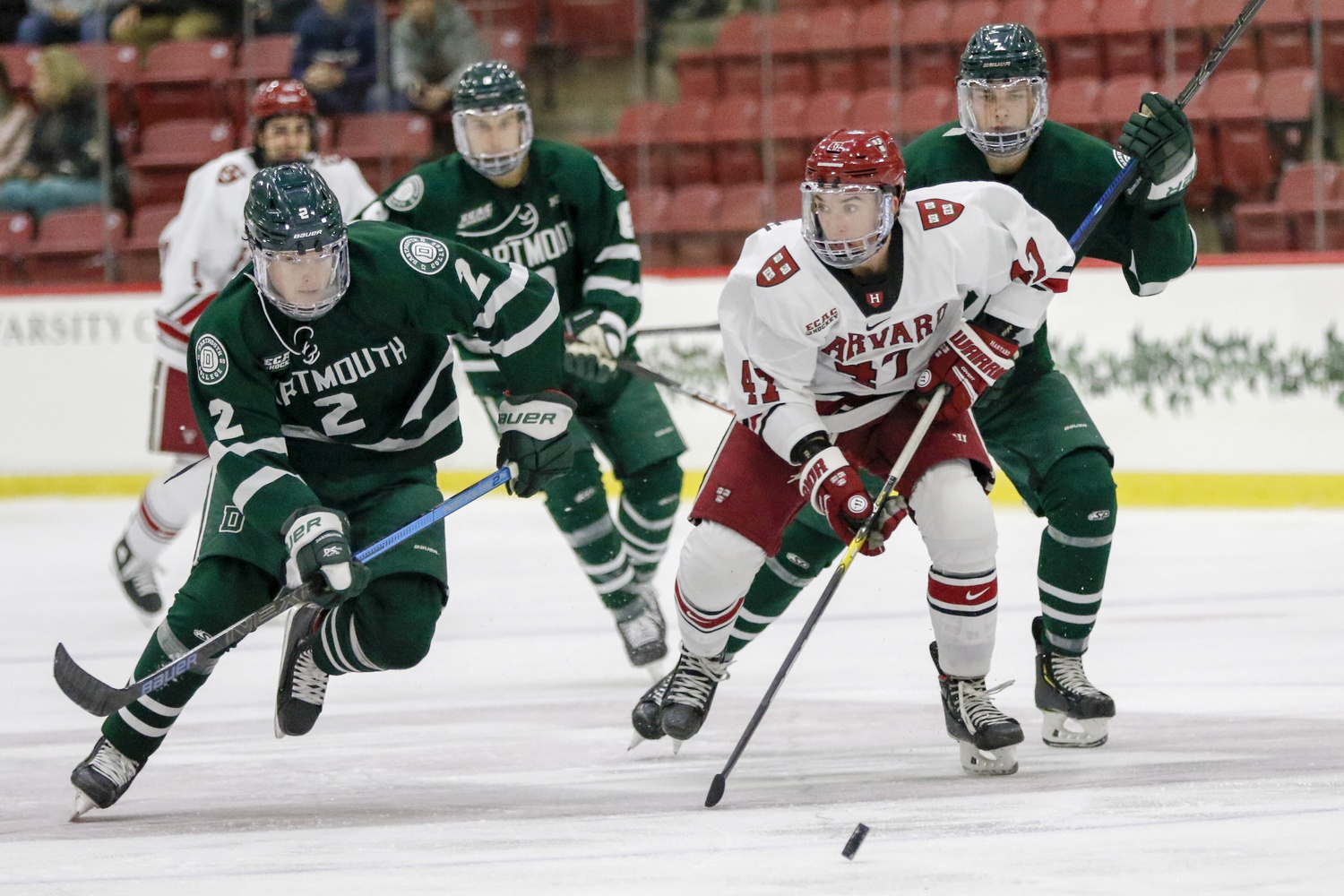 Harvard co-captain and forward Casey Dornbach and Dartmouth senior defenseman Harrison Markell chase down a loose puck in a Nov. 1, 2019, matchup, the Crimson's season opener in the 2019-20 campaign as well. The Crimson would go on to claim a 7-3 victory. By Timothy R. O'Meara
By William C. Boggs and Jasper G. Goodman, Crimson Staff Writers

When most NCAA Division I men’s hockey programs returned to competition last winter, the Harvard men’s hockey team was forced to watch from afar.

Teams across the country grappled with travel restrictions, mask mandates, and other Covid-era policies while playing through the pandemic. By the end of the 2020-21 campaign though, the NCAA did manage to push through the season and crown the University of Massachusetts national champion.

But the Bright-Landry Hockey Center was dormant. Harvard — along with all other Ivy League teams — sat the pandemic-stricken season out, with its players scattered around the country as other ECAC teams competed for a conference title that would have been well within reach for the Crimson.

On Friday, the Crimson will return to the ice, ending an agonizing 19-month hiatus that marks the longest stretch without a game in the recent history of the program. No. 15/14 Harvard will open its season on the road with a conference matchup against Dartmouth at 8 p.m. at Thompson Arena.

Harvard recently claimed a 4-0 victory over the Big Green in a scrimmage on Oct. 16 in Cambridge. In the contest, the Crimson controlled the offensive flow of the game, mounting a 36-19 shots-on-goal advantage. Nonetheless, both teams will enter Friday’s season opener with clean records.

Moreover, after the exhibition loss to Harvard, Dartmouth went on to defeat reigning national champion No. 12/10 UMass, 3-2, in the Big Green’s second and final scrimmage, which also did not count but caught the attention of the Crimson. On Saturday, in game two of the young season, Harvard will return home to Bright-Landry to take on Bentley, who already has six games under its belt and a 3-3-0 record, with wins coming against Ohio State, Boston College, and Holy Cross.

“Everyone can beat everyone in college hockey, especially in our leagues, ECAC and Ivy,” co-captain and forward Casey Dornbach said. “Dartmouth and Bentley are solid teams, and Bentley's proven to beat some really good teams this year. Dartmouth just beat UMass, and yes, we came out with a [4-0 scrimmage] win, but we know they've notoriously been a team that is always tough to play against.”

This weekend’s slate will officially put an end to the preseason for Harvard, which also saw the Crimson defeat Brown 8-2 in its second exhibition game. With only one open weekend between today and finals period, Harvard will play 12 games between Oct. 29 and Dec. 4, eight of them coming in ECAC conference play. On the non-conference side, showdowns against Beanpot foes Northeastern and Boston College in November will headline Harvard’s first-half schedule.

“I think the energy around the team — and around campus, really, as a whole — has been really positive,” said longtime Harvard coach Ted Donato ’91 this week. “I think the excitement to get started is about as high as it’s ever been just because, I think, there’s a greater appreciation for what we’ve missed.”

The Crimson will return a handful of its key players from two years ago, including defensemen Henry Thrun and forwards John Farinacci, Casey Dornbach, and Nick Abruzzese. But Ted Donato’s biggest task early in the 2021-22 season will be introducing much of his squad to D-I college hockey for the first time.

“I think it’s a challenge to make sure we come together as a team from a chemistry standpoint, just because we have two classes full of new guys and a bunch of guys that haven’t played with each other,” Donato said. “But I think early on here and preseason, the group has taken a lot of steps to come together.”

Despite the premature ending to its 2019-20 season, Harvard had good reason to be optimistic about the makeup of its roster going into the next winter. A strong veteran core that delivered 15 wins was set to return alongside a head-turning recruiting class. But after the Ivy League announced there would be no 2020-21 season, five players left the squad for pro hockey. And the Crimson’s top recruit, Matt Beniers, enrolled at the University of Michigan.

“We’re happy for those guys, and obviously everyone has a different path,” said Dornbach, who notched 36 points two winters ago. “For me, it was a no-brainer. I wanted to come back and be an older guy, as a senior.”

Highlighting the incoming class is first-year forward Matthew Coronato, who was selected by the Calgary Flames with the 13th overall pick in the 2021 NHL Draft. 13th overall set a new Harvard record for highest draft selection in program history and marks just the third time a Crimson player has gone in the first round. Altogether, the Harvard roster will feature 11 NHL draft picks, and of the 11, six are newcomers this year: Coronato, defenseman Jack Bar, defenseman Kyle Aucoin, defenseman John Fusco, forward Alex Laferriere, and forward Sean Farrell. Nonetheless, despite newcomers’ credentials and backgrounds in top-tier junior leagues like the USHL, college hockey will present a new challenge.

“Anytime you go from one level to higher level there’s definitely an adjustment,” said Nick Abruzzese, a 5-foot-9 junior forward who was named the ECAC Hockey Rookie of the Year two winters ago.

But he added that he has “full confidence” the younger two classes are “going to be very impactful and key contributors on this team.”

“We’ve already seen a lot of growth from them,” he said. “In the [last] two months, a lot of guys have really grown and come out of their shell a little bit, and really done a good job of making sure that they’re up to speed.”

Abruzzese and Thrun, both juniors, were each named to the pre-season all-league team earlier this month. Harvard was picked to finish third in the ECAC preseason coaches poll, behind Quinnipiac and Clarkson.

On March 6-7, 2020, as the No. 5 seed in the ECAC Tournament, the Crimson defeated St. Lawrence, two games to none, in a best-of-three series to qualify for the conference quarterfinals. Before taking the ice for the win-or-go-home final eight, however, the Covid-19 campus shutdown and 601-day hiatus between games intervened. On the eve of a new season, the unsatisfying end to the last near-normal season has renewed the Crimson’s conviction to kick off the 2021-22 campaign.

“I think a lot of guys in the room feel that we have some unfinished business,” Thrun said. “As a group, we all want to get back together and continue playing. And for me, personally, I feel that I still have a long ways to go to develop.”