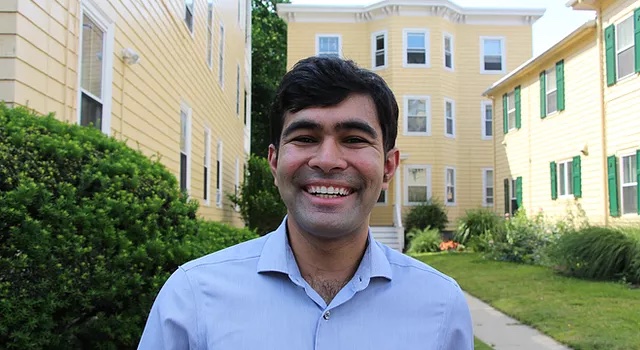 By Courtesy of Burhan Azeem
By Betsey I. Bennett and Darley A.C. Boit, Contributing Writers

Students may have noticed a flyer under their dorm room doors last month for Burhan Azeem, who, at 24, is the youngest candidate running in the Cambridge City Council election.

Azeem immigrated to the U.S. from Pakistan when he was four years old and grew up on food stamps and Medicaid. He studied sustainable energy at MIT on a full scholarship and has lived in Cambridge since his freshman year of college.

Azeem said his relative youth would be a valuable addition to the City Council, noting the difference in age between voters and city council members.

“The city we walk around in is the city we think we live in, and then you go into City Hall and you see a very, very different city,” he said. “I thought that there were a lot of views that weren’t being represented accurately.”

Affordable housing is the central issue of Azeem’s platform. Informed by his experiences with housing insecurity growing up, Azeem runs a nonprofit called Abundant Housing, which does policy work at the state level. He hopes to expand Cambridge’s Affordable Housing Overlay and legalize more of the city’s housing.

“Something like 70 to 80 percent of the housing in the city is illegal, so it couldn’t be built the same today if it was destroyed in some way or another,” Azeem said.

Azeem said he saw the challenges of Cambridge housing firsthand during his time as an undergrad at MIT, when the city rejected the university’s plans for more student housing.

“I was forced to live in a hotel my freshman year because we were out of space,” Azeem said. “There were a lot of little things that happened like that — that you felt like City Hill didn’t care.”

“A lot of the city still doesn’t have bike lanes and buses in particular get stuck,” he said. “Having bus lanes and more frequent buses can be a huge thing there, as well as making a lot of new development — especially in Kendall Square — net-zero so it doesn’t release carbon emissions can be a pretty impactful thing.”

Azeem said he would be an advocate for the middle class amid Cambridge’s transformation into a “barbell society,” with a few high-income residents and many low-income residents.

“We focus a lot on those two demographics,” Azeem said. “You want to have a full spectrum of people in Cambridge, and I think without that we become very segregated by income.”

This election is not Azeem’s first time running for Cambridge City Council — he was the runner-up in the 2019 election.

“The first time you run, you kind of have to prove that you’re a serious candidate,” Azeem said. said. “So this time, I think you come with seriousness because I was the runner up that like, ‘hey, this guy has a very good chance.’”