What the Hell Happened: Donald Trump Jr. Makes the Death of a Hollywood Crew Member Into a Joke 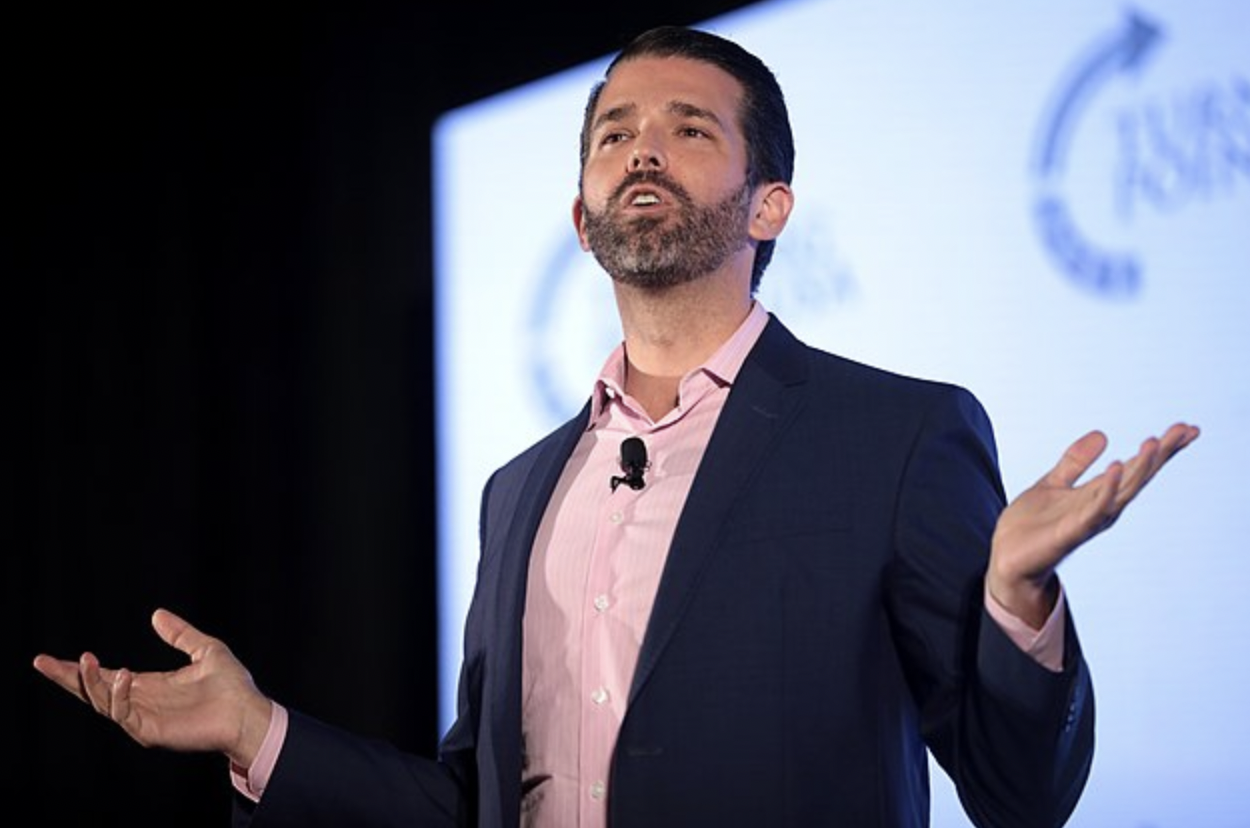 It’s been over a week since a prop gun misfired on the set of the upcoming Western film “Rust,” injuring director Joel Souza and tragically taking the life of cinematographer Halyna Hutchins. An outpouring of support has resulted in Hutchins’ family’s GoFundMe more than surpassing its initial goal of $225k and Alec Baldwin, who fired the prop gun, has reportedly been inconsolable. This has been a time to remember Hutchins, 42, who had worked on more than 30 films, TV shows and miniseries throughout her career. It has also been a time to call for better work practices in the entertainment industry. Halyna Hutchins’ death is a tragedy that could have and should have been prevented, and it therefore has sparked many important conversations around workplace safety and workers’ rights.
Some people, however, have responded to the news in a very different matter.

Donald Trump Jr. is now selling t-shirts with the slogan “Guns don’t kill people Alec Baldwin kills people” on his website. It’s available in four colors for $27.99, and everything from the idea to its execution is unbelievable.

Trump Jr. is obviously referencing the popular pro-gun slogan: “Guns don’t kill people, people do.” Except, it was because of the intrinsic danger of guns that someone was killed. This tragedy could not have happened if guns were not being used on set. The “prop” weapon (a clear misnomer, since this is not the first time that the use of one on set has resulted in a fatal injury) was improperly handled, as Baldwin was told the gun was unloaded. The presence of this weapon on-set, and the lack of safe working conditions which caused many of the film’s crew to walk off set hours before the tragedy, were major contributing factors in this tragedy in the first place. The fatal consequences that can come from gun-related accidents are something that gun control activists have been drawing attention to for years. And yet, Trump Jr., who has notably been pro-gun, seems to be ignoring this fact altogether. In effect, he seems to be mocking his own point of view. Or is he not cognizant of what these words actually mean?

Even setting aside the disrespect implicit in making a joke t-shirt inspired by a person’s death, the shirt still fails on a humor level as well. Its attempt at satire doesn’t work because the shirt isn’t ironic, it’s just crudely referencing a tragedy. It isn’t a witty clap back and it isn’t a valid political message. It actually doesn’t make any sense.

But perhaps Trump Jr. isn’t trying to make a point. Perhaps this is just a shameless publicity stunt. After all, Alec Baldwin impersonated Donald Trump during his presidency in several satirical skits on SNL, and Baldwin has also been outspoken in favour of gun control. Trump Jr. clearly thinks he’s doing something here by capitalizing on his name at such an awful time. In fact, Trump Jr. is also selling t-shirts and hoodies with the slogan “Fauci kills puppies,” so clearly this is not a lesson learned.

Ultimately, this ploy is so tacky that the best thing we can do is ignore it.