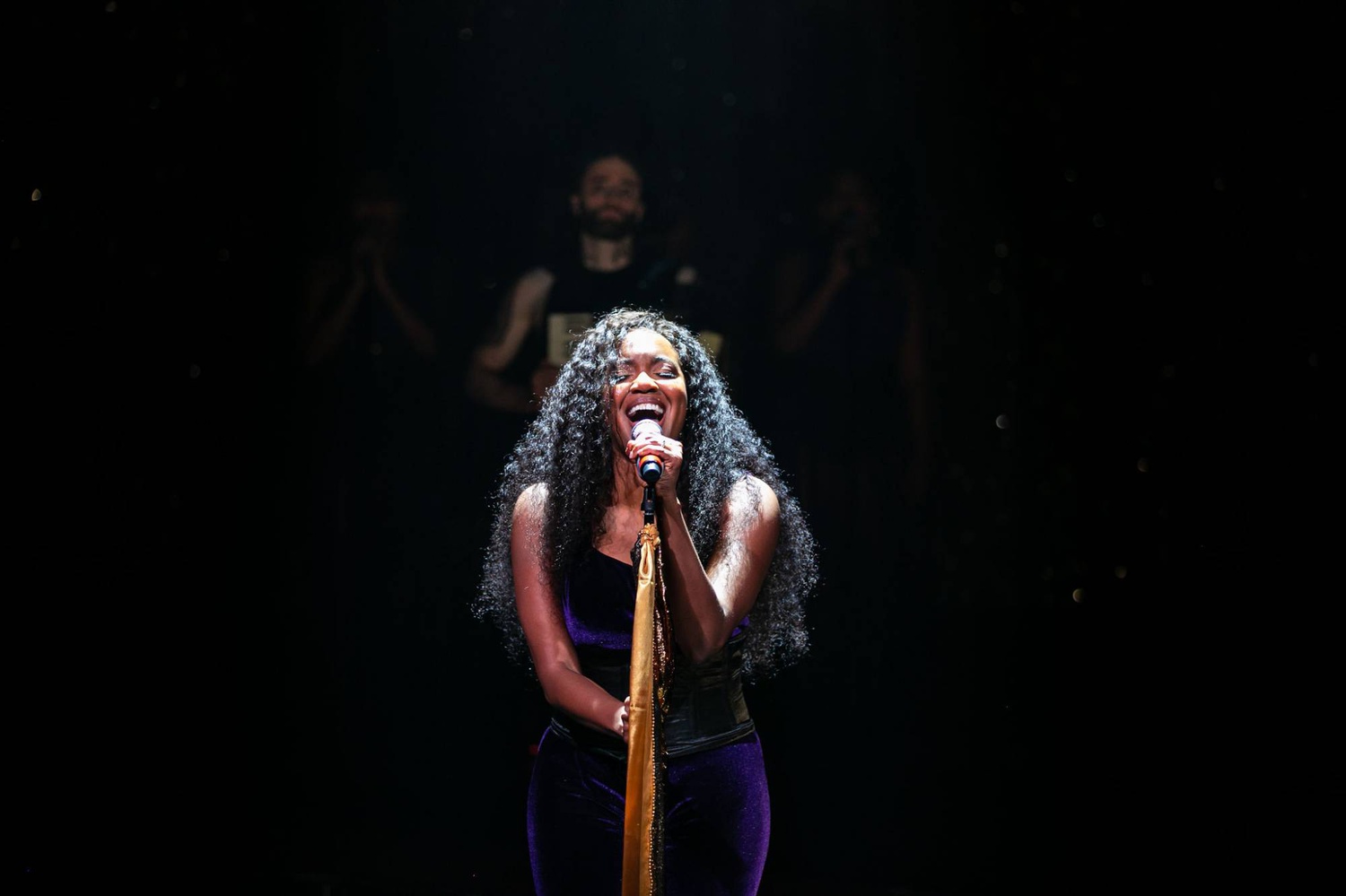 Whitney White as "Woman" in "Macbeth in Stride" By Courtesy of Lauren Miller
By Jenna X. Bao, Crimson Staff Writer

There are few leading ladies in theater as iconic as Lady Macbeth. She is one of the genre’s most captivating, difficult leads — a woman so enthralled by the pursuit of power that she drives her husband to murder and herself to madness. The American Repertory Theater is the most recent company to present their take on the character; their new production, “Macbeth in Stride,” is an 80-minute musical experience framed as a rock concert that adapts Shakespeare’s tragedy to explore Black female ambition and voice. The title “Macbeth in Stride” refers to Macbeth being “in stride” with Lady Macbeth and a counterpart in her story, and the show is the first in a five-part series re-imagining the women of Shakespeare’s canon beyond their romances and often tragic endings.

Whitney White, the creator and star of the show, is utterly captivating in her role as “Woman,” a reimagined Lady Macbeth archetype. The program covers a range of genres inspired by rock, pop, and gospel, yet White’s voice fits perfectly with each song. Her performance is emotional and riveting — it is impossible to look away. Charlie Thurston provides a strong counterpart as “Man,” a version of Macbeth. Amidst the original music, which makes up the bulk of the show, White and Thurston prove they are more than capable of delivering the source text’s famous scenes and speeches with all the tension and gravitas of a great Shakespearean production.

While these two characters were the stars of the original play, this production relies on a talented ensemble with the three witches — played by Phoenix Best, Kira Sarai Helper, and Reggie D. White — tying the piece together and pushing the narrative forward. From the first moment the witches harmonize in the opening number, “If Knowledge Is Power,” they fill the Loeb Drama Center with life and energy, pulling the audience along for the ride.

The dynamic show flows between musical theater and concert modes, just as it flows in and out of the text of the tragedy. One moment the audience sees Lady Macbeth and her husband reeling in the aftermath of their decisions to murder the king, and the next moment, the witches and the musicians in the band discuss how the pair has gone off the rails. Such instances of breaking the fourth wall help make the show more accessible; audiences familiar with the text can appreciate the twists, but those without prior knowledge can also follow along and grasp the fundamental themes and emotions at play.

The premise of excavating Lady Macbeth’s story and redeeming her — not as a conniving woman who manipulates her husband into committing murder, but rather an ambitious woman of color constrained by the prevailing narrative and punished for her desire — is fascinating and wrought with potential. The dialogue is explicit about its goals: White’s character directly states her intentions of attaining not just power but also a voice from the start, and the witches tell her a woman cannot have both ambition and love. The show repeatedly goes meta, with the witches asking how Woman intends to rework a 400 year-old play for the sake of her ego and telling her that she cannot just pick and choose the parts of the story that she likes.

As interesting as this relationship between performer, character, and audience may be, there are also moments in which the rules and roles get confusing. If Woman is conscious of the fact that she is engaging in performance and seeking to reclaim it, why is she unable to change the narrative? If her goal is to tell her story, why is she trapped within the constraints of Shakespeare’s tale — one which insists upon her reliance on a man to attain power and drives her to madness? Or, if Woman knows that the story has a tragic ending from the start, why is this the story that she chooses to obtain power? These questions do not necessarily impede a viewer’s enjoyment of the show, but they confuse the argument the show is trying to make. White makes a compelling critique of the limiting lenses through which we view women of color and their ambitions, but the show's depiction of Woman’s attempt to break out of those limitations is hardly hopeful. That said, the power of an adaptation centering and valorizing Lady Macbeth created by and starring a Black woman is notable in and of itself. "Macbeth in Stride" has successfully reimagined its iconic female lead — a figure long used to insult ambitious women — as an empowering character relatable to marginalized audiences. That enough is reason enough to support it in its run until Nov. 14. Plus, it certainly does not hurt that the visual and auditory execution make it a rollicking good time.

— Staff writer Jenna X. Bao can be reached at jenna.bao@thecrimson.com.