‘Being the Ricardos’ Review: For Better or For Worse, Sorkin Returns 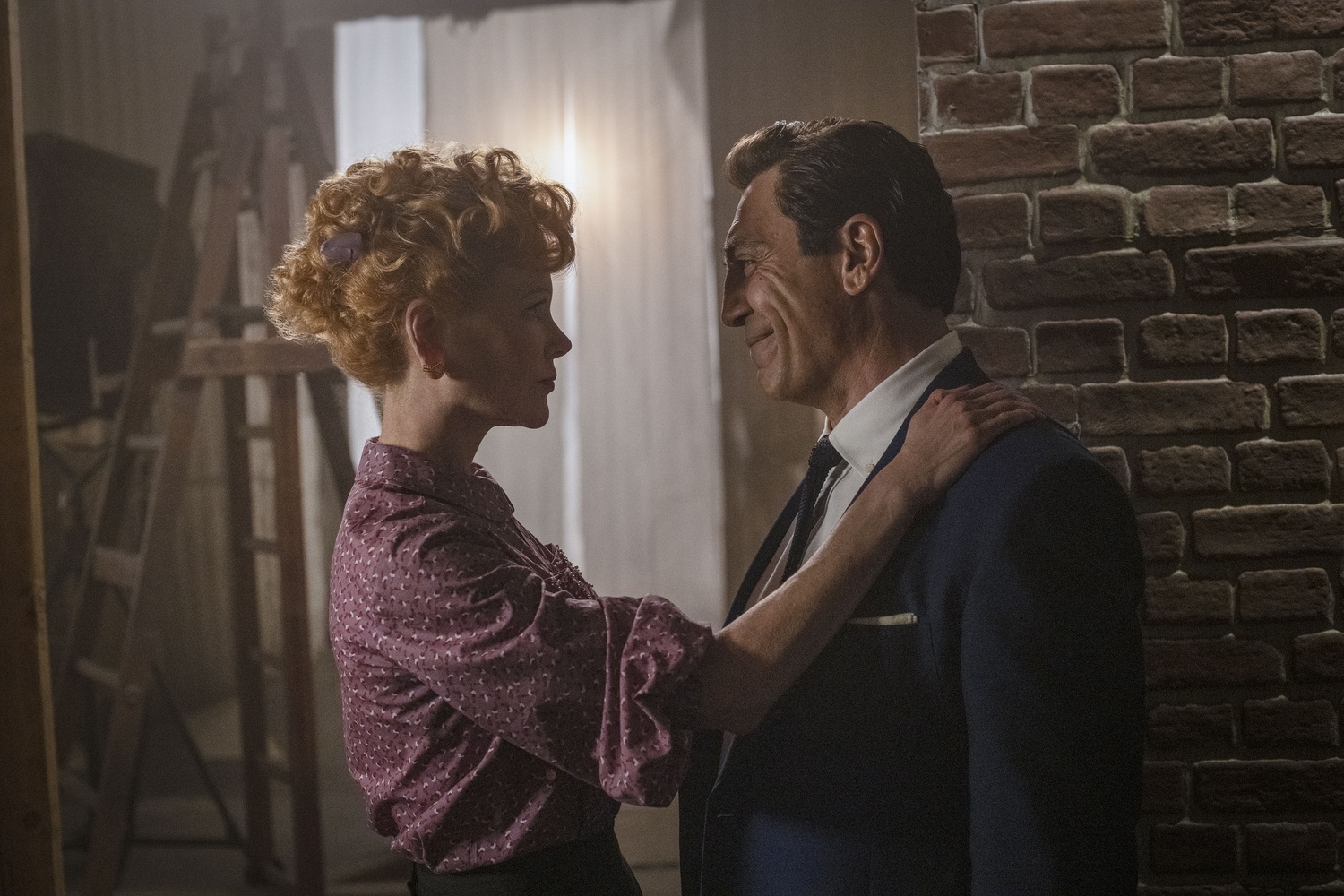 If it is possible to genetically engineer a film to win an Academy Award, it makes sense that Amazon is the studio attempting it — and with “Being the Ricardos,” they seem to have gotten quite close. The film, a biopic written and directed by Aaron Sorkin, is a love letter to old Hollywood; seldom is there a scene without a 35mm film camera or Unidyne microphones suspended by strings and pulleys somewhere in the shot. But beyond that, it’s an idealistic defense of actors and creators and writers and their ability to triumph over a misinformed public.

The film follows Lucille Ball (Nicole Kidman) and Desi Arnaz (Javier Bardem), the real-life actors who played the eponymous Ricardos in the hit 1950s sitcom,“I Love Lucy,” as they proceed through a week of the show’s production: a table read on Monday, blocking rehearsal on Wednesday, filming on Friday, etc. Joining Lucy and Desi are, of course, their co-stars Vivian Vance (Nina Arianda) and William Frawley (J.K. Simmons — whose ability to play a grouchy yet heartfelt old man cannot be outdone), as well as the show’s writers, Jess Oppenheimer (Tony Hale), Bob Carroll (Jake Lacy), and Madelyn Pugh (Alia Shawkat).

This week, however, happens to be a particularly troublesome one for Lucy and Desi; in addition to their marriage troubles and creative control struggles with CBS, the pair face the aftermath of newspaper columnist Walter Winchell accusing Lucy of being a Communist.

It’s a packed week, one that (while not necessarily true to the timeline of real events) makes for a fast-paced narrative structure that skillfully builds tension as the film progresses. Layered on top of this structure (and here’s where Sorkin comes in) are mock interviews with “present-day” versions of the show’s writers. It’s unclear why Sorkin chooses to nest the story within these interviews (other than to open more opportunities to inject snarky quips and witty commentary), and it feels like an unnecessary addition to a film with so many moving parts — for example, Lucy’s backstory, which is told through scattered flashbacks.

These flashbacks are a highlight of the film, due in large part to the fact that Nicole Kidman’s Lucy is absolutely electric. Her performance manages to capture not only the comedic chops (Desi describes her as “kinetically gifted”) of the famous actress, but also the quiet, calculated intensity of one of the most powerful women in Hollywood. Sorkin traces Lucy’s journey from her early days playing supporting roles in RKO films, to her being snubbed of a leading role in “The Big Street,” to her performance in “My Favorite Husband,” a CBS radio comedy that would ultimately turn into “I Love Lucy.”

Lucy, then, Sorkin argues, is a product of these experiences; the creative control she exercises on the “I Love Lucy” set is the result of being sidelined for so long. Every line of dialogue, the blocking of every scene — all of it is carefully picked apart by Lucy in what are the most captivating scenes in the entire film: black and white sequences where Lucy imagines the scene playing out in her head. These scenes, reminiscent of Robert Downey Jr.’s Sherlock Holmes solving a mystery, are inventive, narratively compelling, and cement Kidman’s Lucy as the star of the show.

But despite the care and nuance of Kidman’s performance, Sorkin (as Sorkin often does) cannot help but turn the character into a mouthpiece for his signature didactic social commentary. “We can’t have a pregnant woman on television,” says CBS rep Howard Wenke (Clark Gregg), teeing up Lucy to take a swing at the network’s conservative standards. “We can’t have an all-American girl married to a man who isn’t American,” says bigwig CBS executive Macy (Ron Perkins) when Lucy demands that Desi play her husband — clearing the runway for Kidman’s mic drop defense of Desi. And on and on. Sorkin fills this film with more self-congratulating progressive platitudes than a dinner party on the Upper East Side.

And ultimately, this makes for an unadventurous — in a way, quite boring — film. The climax comes when, after the evening edition of the Los Angeles Herald-Express comes out bearing the headline “LUCILLE BALL A RED,” Desi must introduce Lucy for the Friday night taping. The fate of our heroes, as Sorkin frames it, rests on whether the audience applauds when Lucy comes out — and, of course (with some help from a special guest of Desi’s), they do. A Sorkin happy ending™ straight out of “The West Wing.”

Of course, this does not make “Being the Ricardos” a bad film. Indeed, this is a film filled with beautiful production design, deftly written dialogue, and powerful performances — and not every film needs to be riddled with moral ambiguity; that is certainly not what one expects from Sorkin. And in the end, that’s what this is: it’s not Lucy’s film, nor is it Desi’s — for better or for worse, it’s Sorkin’s, through and through.