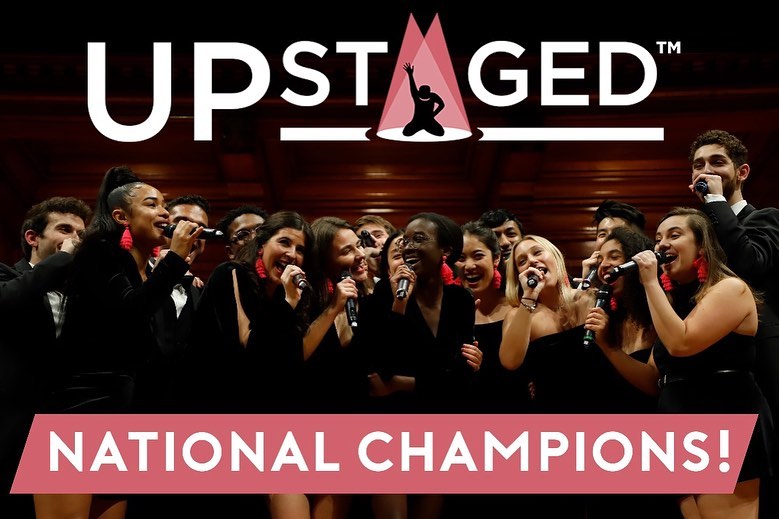 Not even the pandemic can stop the Opportunes — Harvard’s oldest all-gender a cappella group — from making a splash on the national stage. The tight-knit group of vocalists won first place at the UpStaged National Collegiate Performing Arts A Cappella Championship this January, and have continued to collaborate musically despite being physically apart.

UpStaged AID: One World, Every Student Voice, the largest virtual collegiate a cappella championship, invites groups from around the globe to submit a performance clip for evaluation. This competition cycle, judges received more than 160 applicants from across 11 countries and 5 continents.

President of the Opportunes Carly A. Tiras ’22 who sings soprano and mezzo-soprano said that the application process was surprisingly simple, consisting of a single video submission.

“We got an email about it or found it online somehow,” she said. “That’s all we had to do — this one video was carrying us through the whole competition.”

The Big Three — which consist of the Opportunes’ president, music director, and business manager — were the ones to decide which performance clip would be sent to the competition, according to Tiras. After some deliberation, the three members were between “Hard Place” by H.E.R., featuring and arranged by Devon N. Gates ’23, or “All for Us,” by Labrinth and Zendaya with solo performances from Tiras and Hirsh S. Sisodia ’20.

Tiras had high praise for Gates, whom she described as “incredible.”

“The arrangement — which [Gates] also did — is really, really different than the original song, but it just turned out really amazing.”

Ultimately, “All for Us” stood out because of its ability to tap into the synergistic energy of the team, Tiras said.

“It just feels like such a communal song, and so many people in our group put so much into it,” she said. “It just showcases our talents as arrangers, as choreographers, as singers.”

“We all kind of stand together at the end and sing all together,” Tiras added. “It’s just a super amazing, powerful moment to all be singing the same thing together in a little clump.”

Ben J. Dreier ’22, who is the music director of the Opportunes and sings bass, jokingly mentioned it was “also an amazing and powerful moment” when the group found out that Sisodia had been singing the wrong lyrics for a portion of “All for Us” all along.

“He was mixing up two versions of the song,” Dreier said. “One of which is ‘No food in the kitchen,’ and one of them is ‘Too much in my system.’ Instead he was saying ‘No food in my system,’ which is meaningless,” he said, laughing. “I love Hirsh.”

Tiras said that the competition had allowed representatives from each a cappella group to get on Zoom together and figure out who had qualified for the top 64, and later 32.

“From there, people could watch the videos that were submitted — that were the top 32 at that time — and vote online,” she said. “It was a public audience kind of thing that took us through a bracket.”

Near the end of the tournament, a panel of judges were introduced, who Tiras described as “really cool and impressive,” hailing from renowned musical institutions such as Berklee College of Music.

For the final round announcement, a majority of the members united through Zoom to witness the results together, Dreier said.

“We got a nice gathering of Opportunes,” he said. “Most of the 16 of us showed up just to hang out on the Zoom. And then when they released the video, we all watched it together and had some suspense and then they said our names.”

“We were excited. It was exciting,” Dreier said. “Especially for the last round, the other competitors are in the a cappella world, top of the game. Really, really great groups.”

In second place was Vanderbilt University’s Melodores, a young a cappella group founded in 2009 that has since made headlines by performing for shows including Good Morning America and the Today Show.

“It was intimidating to be up against them, and really cool to come out on top,” Dreier said.

“People were surprised,” Tiras added. “We had a poll in our GroupMe that said ‘What do we think the results are going to be,’ and it was half and half.”

Per competition rules, the $3,000 prize for first place was split between the Opportunes and a charity of their choice. The Harvard vocalists chose the NAACP Legal Defense & Educational Fund (LDF) because of the timeliness and efficacy of the fund’s mission and capacity for change.

“We did some research to try to pick something that was both socially relevant at the time and that we thought would actually be very effective,” Dreier said.

“It’s always a problem historically, with underrepresented minorities not getting the proper legal defense that they need, and that enables a whole cycle of oppression,” he added.

When asked what their favorite aspect of a cappella was, both Tiras and Dreier responded along the same lines: the people.

“It’s such a fun part of college to have this group of people that are just separate from other friends that you make otherwise, and from all different grades, from all different backgrounds, different majors — we all just have this one similarity that really bonds us together,” Tiras said.

Dreier said that despite the “bummer” of having to leave campus and not being able to sing together anymore, the group has been actively experimenting with ways of “still participating and feeling ownership” over diverse musical projects, one of which was a virtual jam performance in the fall.

“We put together a sort of toned-down, chilled-out version of [a jam] where everyone in the Ops got to do a little solo performance,” he said. “We got a huge number of alumni and friends and fans to come on a Zoom call and hang out.”

“It was very fuzzy and warm,” he added.

— Staff writer Emmy M. Cho can be reached at emmy.cho@thecrimson.com.