‘Steering Your Own Ship’: Committee Concentrations Forge Unique Paths for Students and Faculty

In addition to the full departments under the Faculty of Arts and Sciences, 10 nondepartmental degree programs overseen by Standing Committees of the FAS offer undergraduate concentrations. Both faculty on these committees and students under these concentrations acknowledge the unique characteristics of pursuing one’s studies under such an administration.
By Kate N. Guerin and Felicia He 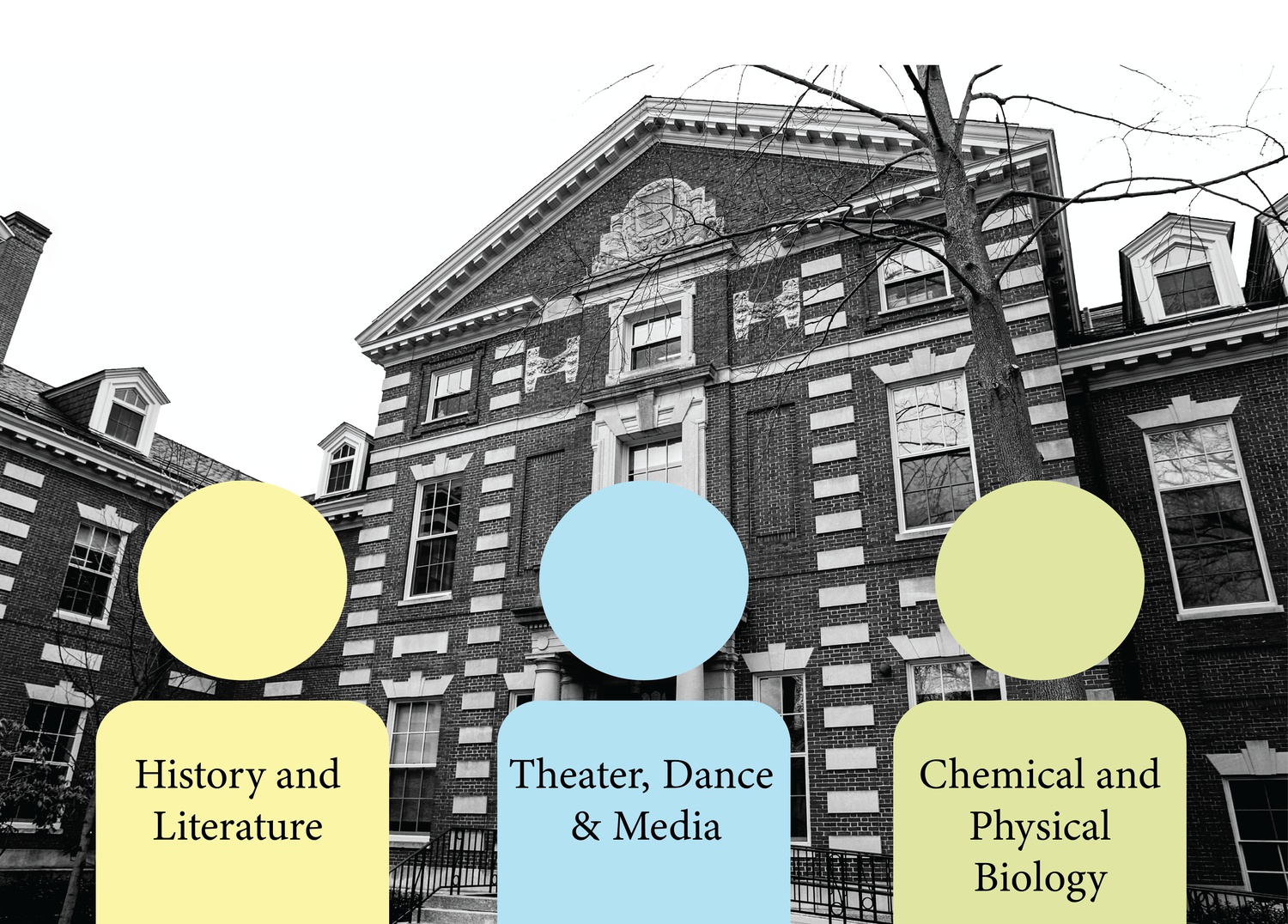 In addition to the full departments under the Faculty of Arts and Sciences, 10 nondepartmental degree programs overseen by Standing Committees of the FAS offer undergraduate concentrations. By Ashley R. Masci

Spanning around 3,700 courses, Harvard’s more than 50 undergraduate concentrations give students at the College numerous paths to a broad liberal arts education.

Behind the scenes, however, these concentrations are not all alike in structure and administration.

In addition to the full departments under the Faculty of Arts and Sciences, 10 nondepartmental degree programs overseen by Standing Committees of the FAS offer undergraduate concentrations. Each curricular committee has been established by a vote of the faculty to perform a specific continuing function, according to Harvard’s Office of the Secretary’s website.

These curricular committees are not structured like ordinary departments. The committees consist of professors and Head Tutors who offer tutorials, set concentration requirements, and occasionally administer final exams and judge theses and general examinations. They are supported by staff and affiliated faculty.

Some popular concentrations under Standing Committees include Chemical and Physical Biology, History and Literature, and Social Studies.

Both faculty on these committees and students under these concentrations acknowledge the unique characteristics of pursuing one’s studies under such an administration. They noted these committees can allow undergraduates greater flexibility in requirements and more intimate academic support from faculty, but also recognized that the freedom to customize can leave them more isolated from peers.

Caroline Light, the Director of Undergraduate Studies for one of those committees — Women, Gender, and Sexuality — said not having an independent doctoral program means that the “central constituency” of the committee is undergraduates.

“We really do get to focus so much of our attention and energy on producing a strong curriculum,” she said.

Students in committee concentrations said they have reaped the benefits of this close supervision. Elizabeth S. Propst ’22-’23, an English concentrator with a secondary in Comparative Religion — which is administered by the Committee on the Study of Religion — explained that she feels close ties to her committee.

“The small size and flexibility means that in Comparative Religion you can kind of do whatever you’re drawn to and you’ll have unconditional support,” she said. “I think the nice part of that too is that you feel really heard and really a part of a process of creating the department's community, instead of just a 20-year-old who walks in and walks out four years later.”

Michael B. Baick ’22 added that History and Literature has been fast-acting and sensitive in responding to the needs of students.

“I think that Hist and Lit is extremely responsive to student interests in a way that other departments might not be,” he said.

In the Social Studies concentration, which attracts approximately 250 students every year, students propose a unique focus field, and decide their course of study with minimal general requirements.

“I think that the biggest pro of Social Studies is that you can really have a customized, specialized, and almost intellectually intimate experience because you basically are the only person doing what you do,” he said.

“You’re still steering your own ship, and it’s certainly not what maybe an Econ or Physics concentrator could say,” added Khan, who is pursuing a secondary in Math, a large full department.

Khan said he and many of his peers chose to study Social Studies after they took popular Harvard courses, such as Economics 10: “Principles of Economics” or Government 20: “Foundations of Comparative Politics”, and felt that they inadequately addressed interdisciplinary studies. The Social Studies concentration, on the other hand, allows students to study a problem or question from multiple perspectives, he argued.

Celtic Languages and Literatures professor Joseph F. Nagy ’74, interim chair of the Committee on Folklore and Mythology, also lauded the freedom that a committee concentration can provide.

The number of undergraduates concentrating within these degree committees vary greatly. Students expressed gratitude for the close relationships they established with faculty on the committees.

‘The Sacrifice for Being Individualized’

Students concentrating within these committees noted it can be more difficult to connect with peers due to the individualistic nature of their studies.

Khan drew comparisons to departments such as Physics or Government in which undergraduates may overlap in many classes due to the more rigid concentration requirements.

“The sacrifice for being individualized, having that customizable of a curriculum, is you lose the kind of cohort experience that I think a lot of other concentrations might go through,” he said.

Baick also said the personalized nature of each student’s program can sometimes make it difficult to choose courses, but the committee members are “so approachable” that support is not difficult to find.

Students and faculty also acknowledged there can be several disadvantages to a nondepartmental concentration, such as less administrative backing when registering for courses in other departments, as well as a lack of name recognition among prospective concentrators.

“There are some times when not having that departmental scaffolding can be tough, especially getting into a competitive English seminar, for example,” Baick said. “There are definitely disadvantages to not always having that really strong environmental infrastructure.”

Light said many freshmen never encountered courses in women, gender, and sexuality studies in high school, and thus would not be immediately drawn to the concentration. To address this, WGS has used its more broadly-offered courses to increase visibility among undergraduates.

“GenEd is a massive draw for us, because we have a lot of courses in GenEd,” she said.

Baick argued History and Literature also distinguished itself among concentrations by creating an ethnic studies track. Harvard students have pushed for a formal ethnic studies department for nearly five decades.

He also noted that History and Literature’s entire Tutorial Board is made up of non-tenure-track faculty.

“I think the amount of turnover is frustrating, and this is what happens when the university does not give all the support it could to the committee,” Baick said.

“I’ve built some great relationships with people who have left, and that’s really tough,” he said. “In the life of an academic, the job is simply not a well-supported enough one to stick around.”

Dean of the Arts and Humanities Robin E. Kelsey did not respond to a request for comment regarding the tenure status of History and Literature faculty.

Faculty and students had varying visions for the future of their standing committees, including on whether they might eventually become departments.

Nagy said that he is happy with the current state of the Folklore and Mythology committee.

“I’m sure it’s always wonderful to expand to have even more concentrators, to have the resources with which we teach our courses, and to offer courses,” Nagy said. “But I think actually, we are well positioned and we are looked upon favorably by the powers that be.”

“We try very hard, and we do try to uphold the larger agenda of arts and humanities,” he added.

Khan gave predictions for how Social Studies could change if it expanded into a department.

“I think the main issue with Social Studies becoming its own department is that I feel, if it were its own department, it would immediately be eclipsed by sociology or history,” Khan said. “Or any of the five fields that it draws from.”

Light said one obstacle to becoming a department is the dearth of academic positions in women and gender studies nationwide, which would limit the prospects of students who graduated from such a department. The “economic devastation” of the pandemic has already forced Harvard to cut graduate department admissions, which will reduce the number of graduate students taking WGS classes, she noted.

“Another consequence of economic devastation is that many institutions all the way across the board have fewer full-time tenure-track positions to fill, which means that these brilliant doctoral students at Harvard have fewer job opportunities when they graduate,” she said.

Light added, however, it is not up to the committee to make budgetary decisions or determinations on its structure.

“Every now and then, in the decade that I’ve been here, there have been rumblings about how WGS will become a department,” she said. “But ultimately it is up to central administration.”

–Staff writer Kate N. Guerin can be reached at kate.guerin@thecrimson.com.