‘A Complete Slap in the Face’: Student Organizations Condemn Bacow’s Guidance to Call HUPD in Response to Racial Violence 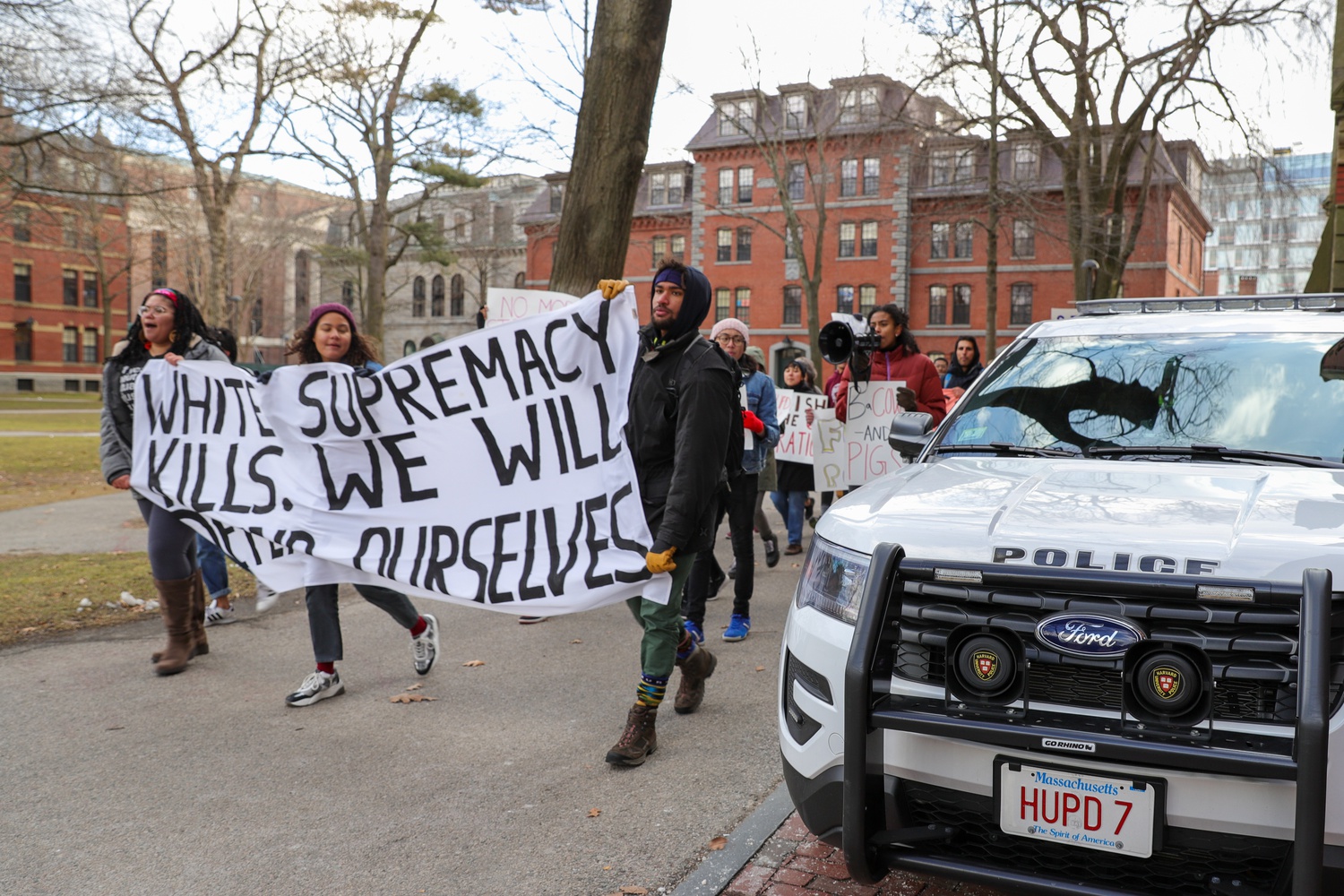 At a February 2020 protest, demonstrators called for the abolition of the Harvard University Police Department. By Ryan N. Gajarawala
By Raquel Coronell Uribe and Alex Koller, Crimson Staff Writers

A dozen student organizations signed onto an open letter criticizing University President Lawrence S. Bacow for instructing Harvard affiliates in an email last week to contact the University’s police force if they have knowledge of a “racist attack.”

In his email, Bacow urged affiliates to contact the Harvard University Police Department to report incidents of racism.

“Each of us can offer comfort and support to members of our community who are feeling targeted and vulnerable,” Bacow wrote. “As always, if you or someone you know has experienced a racist attack, please contact the Harvard University Police Department. You may also share concerns by submitting an anonymous report through the University’s dedicated hotline.”

Student organizers wrote in their open letter, however, that they consider HUPD an “unacceptable and harmful remedy” to anti-Asian violence at the University. In the letter, which is addressed to Harvard affiliates, the authors cited The Crimson’s 2020 investigation into HUPD, which found repeated incidents of racism and sexism within the force spanning the past three decades.

Since The Crimson’s initial investigation, Bacow has set in motion several reviews of the University’s police department.

The open letter condemned Bacow for encouraging affiliates to seek recourse for racism through HUPD.

“President Bacow used Tuesday’s shootings to validate HUPD’s existence and justify their continued threat of violence,” the letter states. “HUPD is an unacceptable and harmful remedy to anti-Asian violence in our community.”

“President Bacow voiced his support for Asians, Asian Americans, and Pacific Islanders in our community and will continue to stand with them, as he said, ‘today and every day going forward,’” Newton wrote.

HUPD spokesperson Steven G. Catalano did not respond to multiple requests for comment.

Sanika S. Mahajan ’21, a member of the South Asian Women’s Collective and anti-sexual assault advocacy group Our Harvard Can Do Better, said she and students spanning various student organizations drafted the letter to convey their shared outrage over Bacow’s statement.

“Police are all tied to not only racism but also sexism — a history of not helping with sexual- and gender-based violence and often exacerbating it and being involved in the fault themselves,” she added.

Given recent reports of racism and sexism within HUPD, Mahajan said she was surprised and displeased to read Bacow’s guidance to affiliates.

“It seems quite ridiculous for me to hear that after a year of what has been quite a reckoning with police brutality and state violence, enhanced by the police,” Mahajan said. “It’s surprising to me with the both national and local context that President Bacow could make a statement that links some safety to police especially in the case of racist attacks.”

Harvard Medical School student Lynn Hur, another organizer behind the letter, called Bacow’s reference to HUPD “insensitive and inadequate,” given that students — some of whom had previously called for HUPD’s abolition — were “grieving and mourning.”

“I think this just speaks to how little the University has been listening to us because repeatedly, various student organizations have called upon them to not only defund and demilitarize HUPD, but abolish it,” Hur said. “It was just a complete slap in the face, reading that email.”

Multhaup said she hopes the open letter sends a message to University administrators that HUPD does not provide a solution to “deep, racialized violence.”

“We need fundamental changes to how we, as a Harvard society, exist with ourselves and with our surrounding community to fix these problems,” she said.