‘Little Oblivions’ Review: An Understated But Enjoyable Change of Pace for Julien Baker 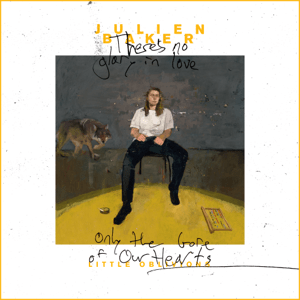 In her newest studio album release, Julien Baker takes a bold step forward in her style while remaining true to her roots as a distinctive solo artist. Released on Feb. 26, “Little Oblivions” shows Baker carefully crafting a new sound for herself as she matures and develops into an even greater artist.

Diverging from the themes of spirituality, addiction, and loss found in Baker’s previous work, “Little Oblivions” dives into separation and longing. In songs like “Faith Healer,” the distinct tinge of Baker’s religious Christian music roots still shine through in her references to spirituality and faith. By taking this anchor of her history and using it to amplify a message of patience and understanding against the stigmatization of addiction and abuse, her music fuses the serious, the secular, and the spiritual in a profoundly enjoyable and empathetic way.

Throughout the album, Baker weaves honest tales of heartbreak that deal thoughtfully with addiction and substance abuse. Baker, who has been open about her experience of addiction, was able to use music as her personal form of catharsis. She beautifully molds these experiences into emotionally wrenching songs that are still easy to listen to and enjoy.

Baker’s songs are always deeply emotional and pull the listener in, inviting us to try to catch all the little details she painstakingly imparts in her music. In particular, the distinct sound of “Crying Wolf” stands out for its deeply intimate and touching dive into her past of addiction and the ensuing struggle of pulling one’s self out of those dark places. By preceding it with “Relative Fiction,” Baker creates a dichotomy between the two songs — the idea of needing to find solace even if only in one’s mind and the yearning for something real, but forgoing escape in the process. Together, the pairing smoothly creates a mood that captures the entirety of the album.

Throughout the album, and notably in “Bloodshot” where the album title is heard for the first time, Baker’s “Little Oblivions” are the moments we all yearn for, the fleeting escapes that, as Baker sings “take me and tear me apart.” Without being overstated or blatant, Baker draws on her past to guide others via beautiful music full of earnest messages. Even in the midst of a pandemic, and with a glimmer of hope now as vaccines roll out, people yearn for their own little oblivions in a number of ways. Some find peace in music as Baker has, and others at the bottom of a bottle. For both groups of people, there’s some genuine good in this album to help find a solution and a way forward.

In her own way, Baker marks her progress as an artist by moving away from her previous voice-guitar sound to a full backing band. Keyboard, banjo, synth, and more are noticeably featured on the album. Incredibly, all the instrumentals are performed by Julien Baker herself and cut into the clean, effortless sound on the album. It’s a clear break from the usual intimacy of her previous work, but it’s still enjoyable.

However, by diverging from the closeness and gentility of guitar paired with her intoxicating voice, the intimacy of Baker’s sound changes on this album. It feels as if — in terms of raw emotion — she has taken a step backwards. Baker had an incredible and powerful style, captured no better than in her song “Go Home,” from her 2015 album “Sprained Ankle.” Although it branches out in taking up the keyboard rather than guitar, there’s something “Little Oblivions” can’t quite express — whereas “Go Home” and the entirety of “Sprained Ankle” yank on the heartstrings and create an atmosphere that demands full attention of the listener’s heart and soul.

Of course, with every album, artists take steps in different directions as they grow and their listeners invariably change. But it seems as if by trying to embrace a more traditional band style, Baker lost that bit of the sonic intimacy that made her exceptional. “Little Oblivions” is still a great collection of music, but the sound has changed. An exception on the album is “Song in E,” which distinctly echoes her previous sound and is a welcome change from the rest of the album.

All in all, Julien Baker produced another incredible album. As she embraces and moves forward with the new band-like sound, it will hopefully into something as beautiful and intimate as “Sprained Ankle” with the added benefits of a more all-encompassing listening experience and the intimacy of Baker’s lived experiences paired with new instrumentation.