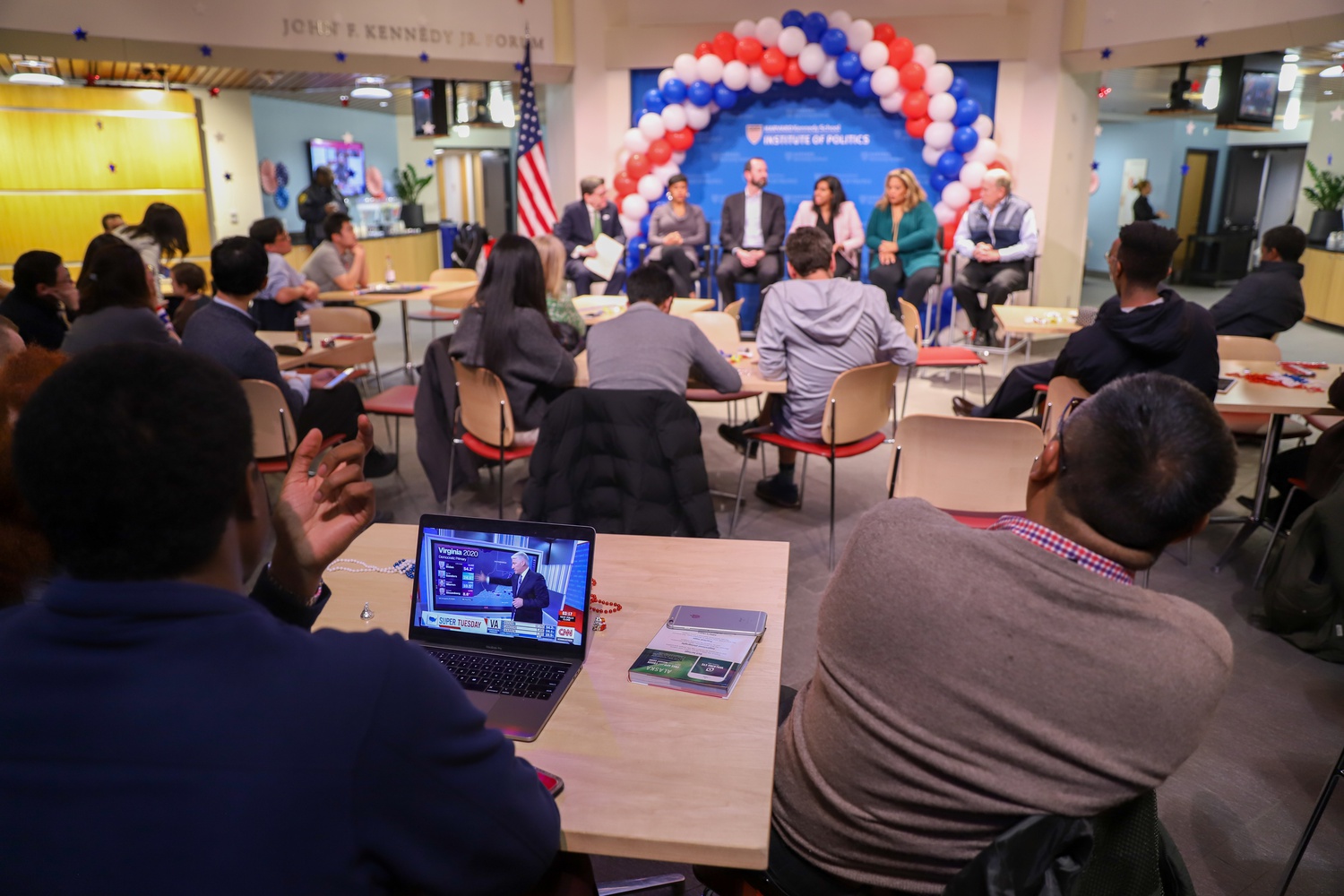 Students await election results during the Institute of Politics' most recent in-person forum event, on Super Tuesday in March 2020. A new IOP poll found that young Americans are much more hopeful about the country's future than they were four years ago. By Ryan N. Gajarawala
By Isabel G. Skomro, Crimson Staff Writer

Young Americans, especially people of color, are significantly more hopeful about the future of the country than they were four years ago, according to a Harvard Institute of Politics youth poll released Friday.

The IOP’s Harvard Public Opinion Project conducted the national poll of 18-29 year olds from March 9-22, surveying 2,513 young Americans about their views regarding issues including “the Biden administration’s first 100 days, the future of the Republican Party, mental health, and the impacts of social media.”

The IOP has conducted regular polling of young Americans for over 21 years, examining their political views and social trends, according to a press release.

In the fall of 2017, an HPOP survey showed that only 31 percent of young Americans were hopeful about the country’s future; today, that number has jumped to 56 percent.

The changes in hope among people of color were largest. In 2017, just 18 percent of Black American respondents said they felt hopeful about America. This poll — taken before the former Minneapolis police officer Derek Chauvin was convicted of murdering George Floyd — revealed that now 72 percent of young Black Americans feel hopeful about America, a 54-point increase. The number of Hispanic youth who said they feel hopeful jumped 40 points, from 29 percent in 2017 to 69 percent today.

HPOP, an undergraduate study group at the IOP, is headed by John Della Volpe, Director of Polling at the IOP, and Jing-Jing Shen ’23, who serves as student chair.

In the press release, Shen said the results suggest Generation Z remains optimistic and trusting, despite recent increases in partisanship.

“These results speak to the resilient and confident character of young people,” she said. “Despite personal worries, racial unrest, a polarizing climate and disillusionment with politicians, government, and big tech, we’re still hopeful, and we want to actively create a better future for our country.”

Della Volpe said in the release that he believes this year’s youth poll had revealed the “power” of politics.

“With a new president and the temperature of politics turned down after the election, young Americans are more hopeful, more politically active, and they have more faith in their fellow Americans,” he said.

The poll found that more young Americans today consider themselves politically active than in 2009, an increase from 24 percent to 36 percent.

According to the poll, 59 percent of 18-to-29-year-old Americans approve of the overall job performance of President Joe Biden, who will mark 100 days in office next week. Sixty-five percent approve of his handling of the coronavirus, 58 percent of climate change, and 57 percent of race relations.

The poll also surveyed respondents about their mental health. More than half of respondents said they were going through “an extended period of feeling ‘down, depressed, or hopeless’ in recent weeks,” and 28 percent have had thoughts of hurting themselves in some way.

More than half of the college students surveyed reported that their mental health has been harmed by school or work-related issues in the two weeks prior to taking the survey.

“We won't be able to do this generation service without talking about the burdens that they carry, significant challenges related to the state of their mental health,” Della Volpe said in a Friday morning press conference. “Despite that, though, young people are as engaged in America, as we've seen in the history of this poll. And they feel excited to be part of this new chapter of America.”

Additionally, 31 percent of 18-29 year olds say that politics has gotten in the way of a friendship. Controversy around race relations has proved divisive to friendships, with the poll revealing that 44 percent of young Americans say they could not be friends with someone who disagrees with them on the issue.

The poll also found that young people have recognized a rise in partisanship and selfishness in politics, and that three-quarters of American youths agree on the need for more “open-mindedness” in politics.

Sixty-eight percent of youth said they believe Biden won the election fairly, though only 26 percent of young Republicans said the same. One-third of Republican respondents said that Trump had responsibility in inciting the storming of the Capitol on Jan. 6, while 88 percent of Democrats felt the same way.

Thirty percent of young Americans said that history will judge Trump as “the worst president ever.”

Shen said at the press conference that the results illustrate a misconception about young people in America today.

“It seems like as much as our generation has been written off as divided and apathetic, the truth is, we do care. We care a lot,” Shen said.