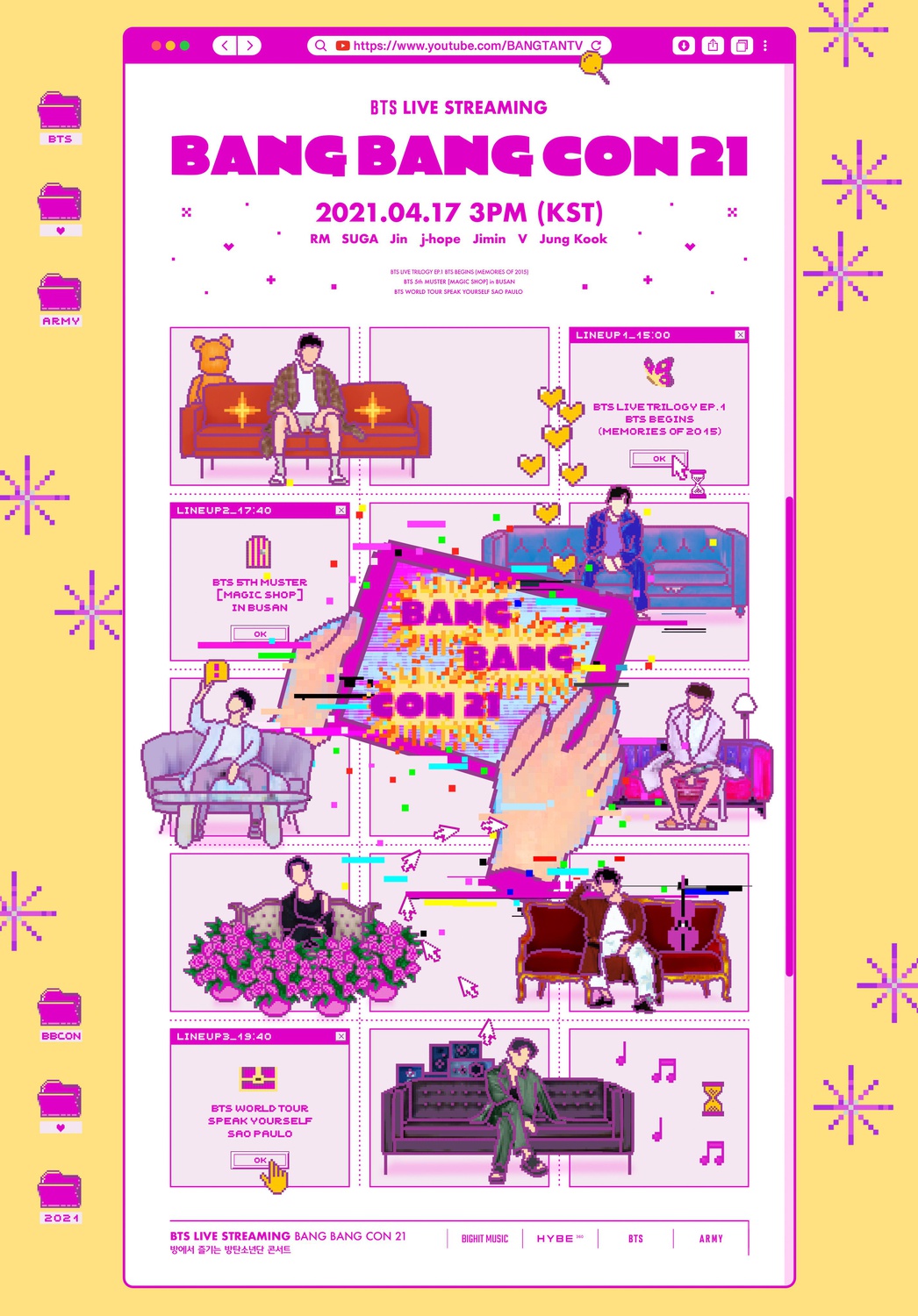 On April 17, the K-pop group BTS streamed a series of virtual concerts as a sequel to their first Bang Bang Con event in 2020. This virtual concert received massive viewership, surpassing 2.7 million simultaneous viewers globally. With this impressive accomplishment under their belt, BTS have streamlined a new form of interaction with their fans in the now largely contactless world of entertainment.

The event started with a telecast recording of the Seoul concert “BTS Live Trilogy Episode I: BTS Begins.” This concert was originally held over the course of two days in 2015, featuring songs from the albums “2 Cool 4 Skool,” “O!RUL8,2?,” “Skool Luv Affair,” and “Dark & Wild.” The event began with some throwback pictures to the boys’ middle school days, throwing their fanbase (ARMYs) down the nostalgic deep end. It then flashed forward to BTS’s debut in March 2013, bringing the boys together to their rookie days. Some other highlights included a hip-hop style dance battle between lead dancers Jimin and J-Hope, the premiere of the song “Converse High” in anticipation of their next album “The Most Beautiful Moment in Life Pt.1,” and some call-and-response bonding time with ARMYs during “If I Ruled the World.”

All in all, this concert showcased BTS in all of their rookie glory. Over the course of the show, it became clear just how hard the boys themselves had worked — blood, sweat, and tears, they left it all on that stage. What they lacked in confidence and personal development back then was filled by a feverish determination to succeed without any guarantee of success. Way before Grammys performances and Billboard records became a reality, all BTS had were a whole lot of smokey eyeliner and a dream to be great.

The next streamed event was the 2019 5th Muster Magic Shop in Busan. A BTS muster is a fan festival that usually happens every year with skits and fanservice for ARMYs. This special fast forwards the boys four years into the future, after BTS had added the following albums to their discography: “The Most Beautiful Moment in Life Pt. 2,” “The Most Beautiful Moment in Life: Young Forever,” “Wings,” “You Never Walk Alone,” “Love Yourself: Her,” “Love Yourself: Tear,” “Love Yourself: Answer,” and “Map of the Soul: Persona.” Much had changed for the Bangtan Boys after this leap forward in their music, including topping various global charts, winning their first Daesang at the 2016 MAMA awards — and then 22 more over the span of the following three years — and performing at the 2019 Billboard awards.

The fanmeet begins with the statement, “The Magic Shop will be your guidance,” addressing the concertgoers as well as ARMYs all over the world with a message of hope. In that spirit, the concert takes off with the song “2! 3!” — an oath of hope to fans that the boys performed on a circular stage with ARMYs surrounding them on all sides. That communal spirit continues throughout the show, with special performances of RM’s “Trivia: Love” interlude during tea time, healing therapy magic shop skits, and hilarious music video footage of “Spine Breaker.”

As a whole, this concert shows the new and improved BTS. That means less dancing and more singing for the vocal line (Jin, V, Jungkook and Jimin), with members Jin and V getting more line distribution than in earlier albums, as well as more verses for the rap line (Suga, RM, and J-Hope). The sound is also new and improved, with more of a laid back R&B and pop sound as opposed to the hip-hop heavy emphasis in their earlier works. However, there are also a couple of throwbacks to their rookie days, with unchoreographed performances of “Jump” and “Ma City.”

It’s safe to say that six years after their debut, BTS no longer doubt their success but instead utilize it to cater to their newly developed strengths.

The group put their newfound skills to use in the final event of “Bang Bang Con 21,” the “BTS World Tour Love Yourself: Speak Yourself” concert in São Paulo, Brazil. This stadium tour was an extension of their “Love Yourself” World Tour in May of 2019. Flocked by larger-than-life lions and a fleet of backup dancers, the boys start off the concert with high energy performances of the EDM genre songs “Dionysus,” “Not Today,” and “Wings.” This time, there is a greater emphasis on pyrotechnics and LED lights that came after six years of being professional performing artists. In addition, this concert features solo performances from each of the members that caters to their individual tastes and strengths. Evidently, BTS’ self-confidence grew as they matured, leading to larger-than-life aesthetics and impressive stage presence.

Brazillian ARMYs have a special place in BTS’ hearts, spurred by a long history of tours in South America. Giving back to São Paulo with this stadium tour is BTS’ thanks for their fans’ love, support, and energy. That mutual love and respect is evident in iconic solo performances like “Trivia: Just Dance,” which received loud fan chants of “J-Hope” as the rapper danced across the stage. Likewise, Jungkook showed his gratitude for ARMYs’ support through the lyrics in his ballad “Euphoria,” while Jin’s “Epiphany” performance had the entire stadium singing “I’m the one I should love.” All of these individual sentiments culminated into a powerful collective performance of the song “Mikrokosmos,” which served as the boys’ final love letter to Brazilian ARMYs — and to all the viewers of “Bang Bang Con 2021.”