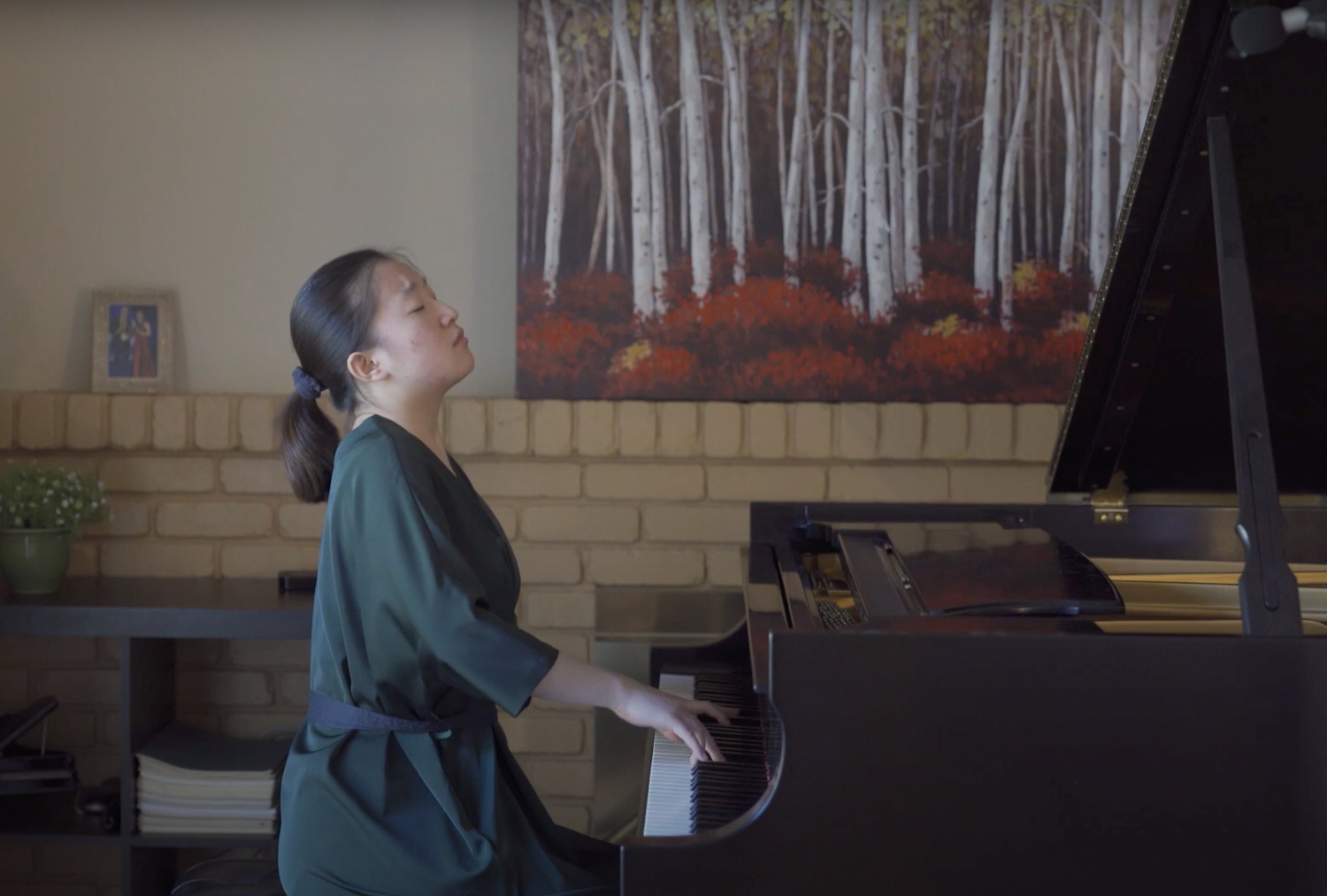 Following their Chopin-themed recital in March, the Harvard Piano Society put together another recital on April 9. This event showcased the diverse talent of Harvard students — including an appearance from a graduate student at the Harvard Kennedy School — with performances of Beethoven, Schubert, Kapustin, and others. This Spring Recital took place on Zoom, where students were challenged to emulate a typical concert setting, either presenting a prepared recording or performing live from wherever they were.

The program began with a performance from Arav V. Karighattam ’23, playing the Allegro from Beethoven’s “Piano Sonata No. 1 in F minor, Op. 2, No. 1.” When finished, the audience took to the chat and reaction functions to applaud and congratulate Karighattam for his performance.

The next performer presented was Keita Takemura (HKS ’22), who played Alexander Scriabin’s “Etude in F minor, Op. 42 No. 7” and the Andante from Leoš Janáček’s “In the Mists.” Takemura said that though he’d been bummed by the virtual setting of the recital, he ultimately found this recital to be more rewarding than expected.

“Before the concert, I thought the performance should be relaxing. Since I won’t see the audience in person, I can play in my room, I can play with the piano I got used to. However, after I started playing, it was [more] nerve-wracking than expected since I felt the audience behind the Zoom,” said Takemura.

Forrest G. Flesher ’21 changed the tone with an intense performance of Nikolai Kapustin’s “Eight Concert Etudes, Op. 40 No. 3: ‘Toccatina.’” A veteran to the Piano Society, Flesher found beauty in the virtual performances as he reflected on his four years participating in the Piano Society.

“Figuring out how to make the music sound beautiful even with a poor audio quality has been a very rewarding challenge, and I’ve noticed things in some pieces that I’ve never noticed before,” said Flesher. “This past year I’ve really learned to view playing piano as something I do for my own enjoyment rather than for performing and playing for others.”

Nearing the end of the recital, Felicia He ’24 and Catherine B. Huang ’24 both used the virtual setting to their advantage and presented pre-recorded performances of the first movement of Franz Schubert’s “Wanderer Fantasy in C Major, Op. 15, D. 760” and Frédéric Chopin’s “Ballade No. 1 in G minor, Op. 23,” respectively.

The spring recital closed off with César Franck’s “Prélude, Choral et Fugue, FWV 21,” pre-recorded by Lucas H. Amory ’24. Amory recreated an in-person performance, wearing performance attire and playing in a concert hall, providing a view of the full piano as well as some of the auditorium. This was also the longest performance, nearing 18 minutes. After the virtual applauding and congratulations, President of Harvard Piano Society Hyuntae Choi ‘24 gave closing remarks, thanking everyone for attending and welcoming attendees to stay behind and meet some of the pianists.

Choi revealed that keeping the Piano Society alive through the pandemic has been difficult, but is proud of how everything turned out. “While the past year has been difficult for all of us, seeing all of us persevere and continue to play the music we love through these times left me inspired,” said Choi. “Our pianists are so talented and dedicated, and I was especially impressed by the great diversity of works featured.”

A big proponent of keeping the arts alive at Harvard, Stephanie Troisi, Student Services Coordinator at the OFA, noted how heartening it was to see groups like the Piano Society find ways to keep their art alive. While it was difficult to coordinate with the majority of the community spread across the globe, Troisi noted that they have worked to meet equipment needs for various groups and have strategically planned out ways to safely open up music spaces for musicians on campus.

“The Piano Society has been a meaningful contributor to the Arts Community over a number of years and while its presence had been a bit quieter over the last few, to see it being brought back to vibrancy through these performances is heartening,” Troisi said.