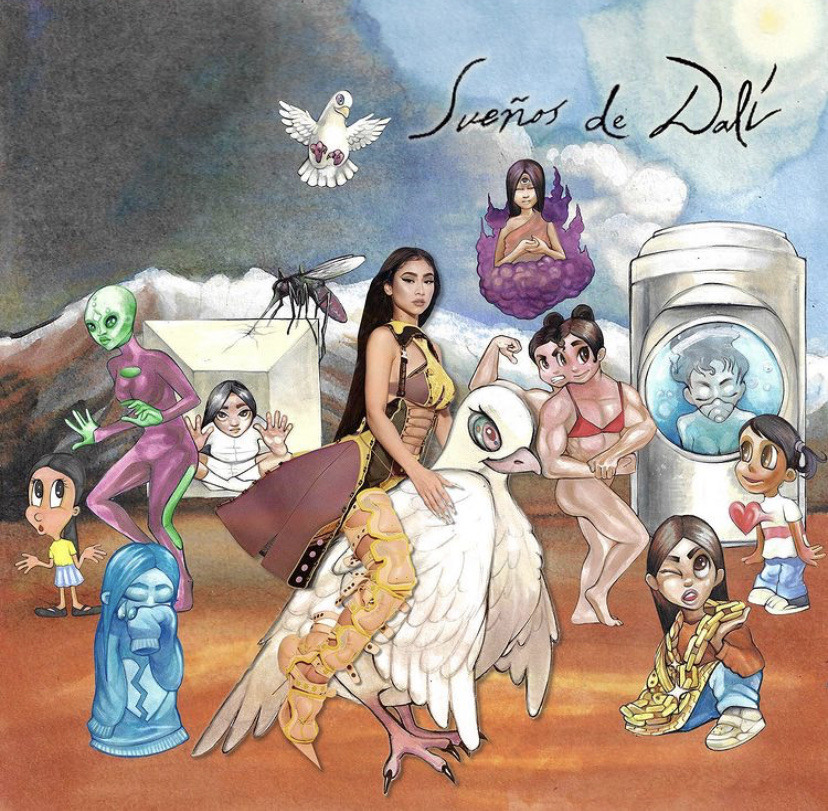 The Chilean-American singer was born in Manhattan and is now living in Santiago. Following the release of her hit song “Not Steady,” she became the first Chilean artist to sign under the Sony Music Latin label in 2018. Since then, Castillo has been dabbling in many genres, her singles mixing love and pain in a bilingual blend of ballad and rhythm.

That duality of culture, language, and sound is ingrained in “Sueños.”

The album begins with Castillo paying homage to her Chilean roots with “Mi Palomita.” This opening track has soulful guitar chords and rhythmic castanets that set an intimate mood. That folklore quality translates into the lyrics that speak about “Palomita,” a little dove whose singing voice brings peace and calm. That connection between Castillo’s stage name and the lullaby-like melody shows an emotional side to the singer’s upbringing by her grandfather, lending an introspective quality to the track. Similarly, the interlude “Dreams” echoes that naturalistic groove, stripping the instrumentals bare to focus on Castillo’s raw vocals as she sings about loved ones staying by her side. “I was recording it with all the insects, all the crickets, the frogs, the birds, everything around me,” revealed Castillo in an Apple Music interview, explaining the influence of nature and nurture on this song.

In the same vein of self-reflection, Castillo also embraces her romanticism and sexuality. “For Ya” and “Religiosa” dive into the singer's candid experience with falling in and out of love. In lyrics like “Lo doy todo por ti” (I would give everything for you) and “Cuando se siente así de bien soy religiosa” (when it feels this good I’m religious), love is almost a feverish devotion for Castillo. Once again, the sonics are smooth and minimalistic, often purposefully undefined to fade into the background. The clandestine lyrics and sexy melodies characterize the singer as lovesick and vulnerable, having been hurt one too many times because of that.

The deconstructed sonics on these tracks would get monotonous very quickly if not for Castillo experimenting with bold new beats.

The backing of dancehall rhythms to the rap verse in “Goteo” makes the song sound new age and novel in the context of this album, even though it has been previously released as a single. Castillo herself admitted that she wanted to “talk about how fly [she is]” on this track, and that message comes across clearly in the dominant beats that make a statement when compared to the instrumental mellowness in the rest of the album. “Que Wea” is another high-energy track that echoes that hyped up sentiment in the English rap verse: “No red light stoppin' / Everytime you see me out you know big shit poppin'.”

“RDMDA” reveals a heartbroken Castillo as she sings about “Thе wrongs that you did me,” with a hint of reworked autotune that resembles Rosalía’s neo-Spanish sound. Likewise, the harmonizing adlibs atop the booming bass in “I Love Her” bring a whole new sound to those same heartfelt emotions of “I think I love her” in the chorus, backed by funky trap beats. These intermittent complexities in the music enrich the album, diversifying the quality to the sounds while not straying away from its introspective lyricism.

The album’s artwork is perhaps the most telling symbol of the diversity of Castillo’s musical influences.

The collage-like scene features a mix of various cartoon characters on the backdrop of a deserted landscape, clustered around a photorealistic Castillo riding a dove. Like her multifaceted approach to music, the artwork features many themes: love, growth, creativity, and style. In the same way “Mami” pays homage to Latin icon Ivy Queen, the eclectic art form echoes the work of Salvador Dalí. Just like “Traumada” features both a sensitive girl who’s been traumatized by love, and a girl who doesn’t “want anything to do with love,” both of these versions of Castillo coexist in the cover. That same contrast of universality and specificity of the new school art form parallels the subjective and simultaneously relatable relationship woes in “For Ya.”

The good, the bad, and the ugly: Castillo bares it all front and center. That complex coming of age narrative in “Sueños” parallels Castillo’s own story of becoming Paloma Mami.