Philip Kreycik ’06, Who Died at 37 After Going Missing on Run, Remembered for ‘Quiet Strength’ and ‘Adventurous Spirit’

Philip Kreycik '06, an environmentalist and avid adventurer, disappeared on a trail run outside Pleasanton, Calif. on July 10. In a testament to his impact, hundreds rallied for a search and rescue effort that the Alameda County Sheriff's Office called one of the largest ever on the West Coast.
By Vivi E. Lu 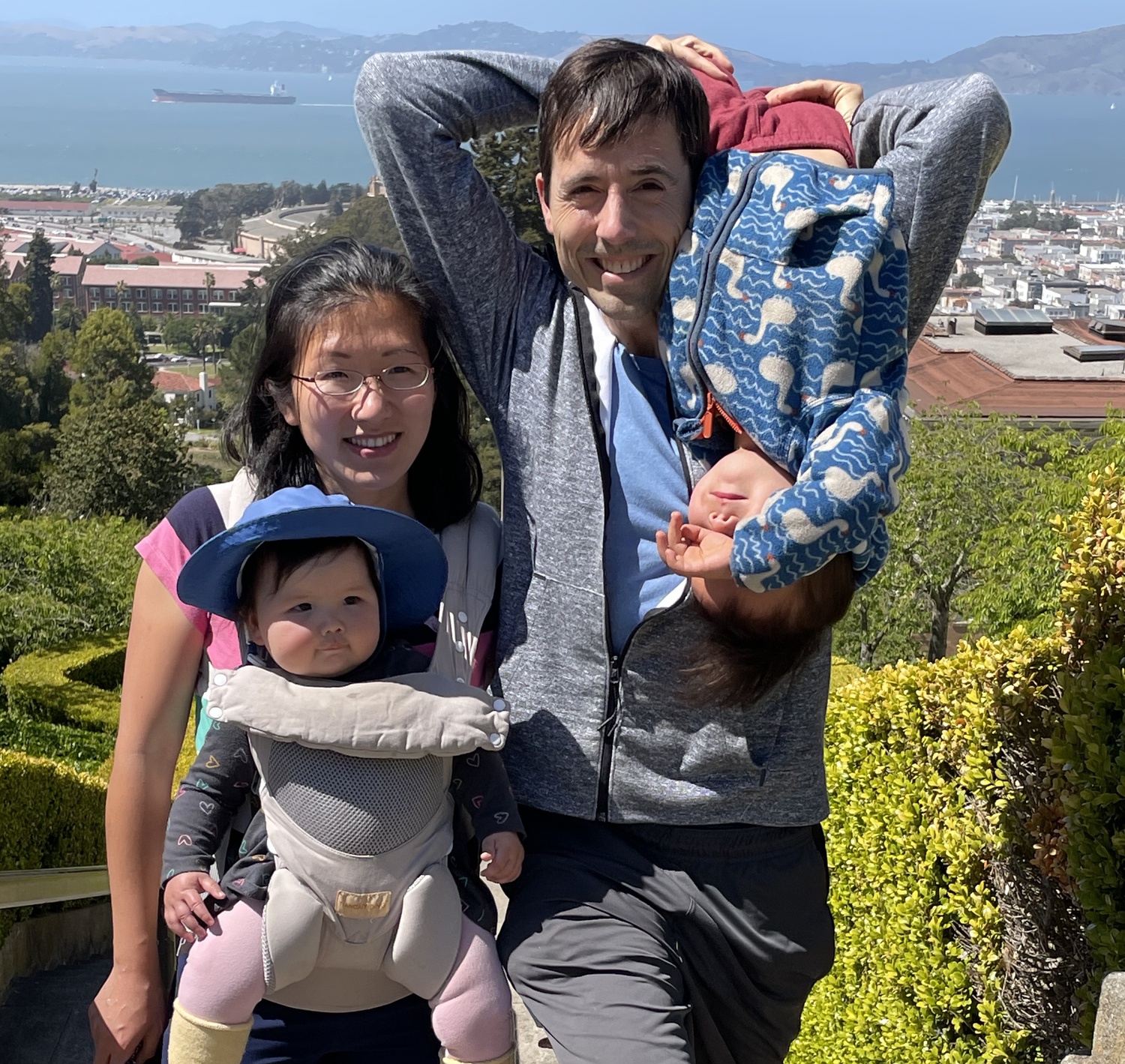 Philip W. Kreycik ’06 with his wife Jennifer Yao and their two children. By Courtesy of Tom Wooten

Over the 15 years Philip W. Kreycik ’06 spent at Harvard, former First-Year Outdoors Program director Brent J. Bell remembers him as being unfailingly strong and kind with a “vigorous curiosity.”

“People I know talk about how comforting it was to have Phil’s hand reach out to you and help you,” Bell said. “He did a lot of things that he would consider small things … small moments that had big influences on people.”

Kreycik, an environmentalist and avid adventurer, disappeared on a trail run outside Pleasanton, Calif. on July 10. His body was found on August 3 just off of the trail. Although his initial autopsy has ruled out foul play, the cause of death remains unknown.

After Kreycik was reported missing, hundreds rallied for a search and rescue effort that the Alameda County Sheriff's Office called one of the largest ever on the West Coast. Twelve thousand people joined a Facebook group for the search and a fundraiser for Kreycik’s family has raised more than $150,000.

Kreycik, who graduated from the College in 2006, revitalized the Harvard Outing Club and worked on the University’s environmental initiatives with the Resource Efficiency Program and Harvard Office for Sustainability. Throughout his undergraduate years and the decade he spent as Faculty Dean Aide – or Elf – in Adams House, Kreycik was known for his humor, generosity, and humility.

He was also always outdoors — an ultramarathoner, biker, and “renowned adventurer,” said Thomas S. “Tom” Wooten ’08, who met Kreycik through the Outing Club.

“The size of this search in part is testament to how devoted the people in his life were to him,” Wooten said. “Everybody who knew him knows that he would be doing exactly the same thing for us if the tables were turned.”

‘Happy To Be Outside with Anybody’

Born in Minnesota and raised in Richmond, Va., Kreycik resided in Adams House and concentrated in Earth and Planetary Sciences while at Harvard, eventually earning a Hoopes Prize for his senior thesis. As a lover of the outdoors, he was a leader in the First-Year Outdoors Program, Harvard Outing Club, and Mountaineering Club.

Patrick F. Baur ’07, who helped Kreycik revive the Outing Club, recalled his friend’s “inclusive and open and loving” strength that came to define the club’s culture.

“Phil just had this infectious energy and infectious joie de vivre, spreading that excitement, that adventurous spirit, just the will to live, to the people around him,” Baur said. “Phil enjoyed life most when he could help other people enjoy life.”

“Phil kind of was like that bike,” he said. “People might not know that this guy just ran 36 miles in the mountains, or he just bicycled to Mount Washington, climbed Mount Washington, and biked back to Harvard in one day.” 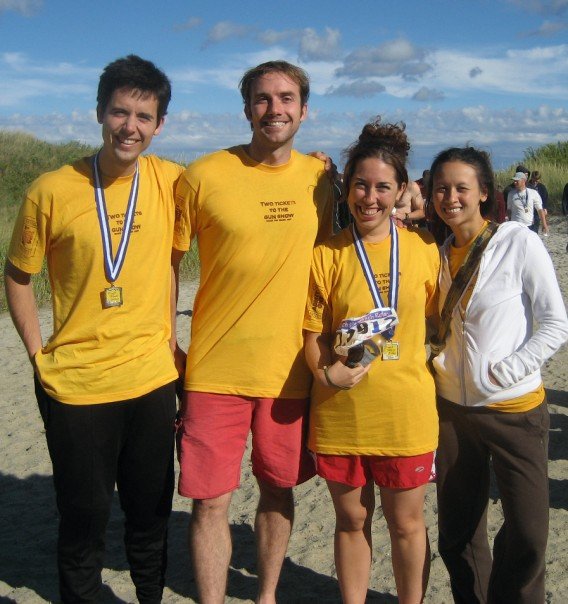 Kreycik, left, at the Reach the Beach Relay in New Hampshire in 2007. His friends described him as an adventurous spirit who loved to spend time outdoors. By Courtesy of Nathan Gauthier

Scot M. Miller ’07, a fellow Outing Club member and Earth and Planetary Sciences concentrator, recalled that Kreycik once asked him to go on a bike ride from Harvard to Canada, a trip Kreycik later completed with his wife on a tandem bicycle.

“One of the nicest and most generous and also one of the most adventurous people that I’ve ever met,” Miller said. “And Phil also had a side of him that I think was incredibly quirky and mischievous, which I loved about him and really appreciated.”

Karen “Lexi” Tuddenham ’05, a former FOP leader alongside Kreycik, described him as “up for anything.”

“He often brought people along for his adventures, but he also was totally fine just going off and doing something wacky on his own, too,” Tuddenham said. “Time was no object, not having just the right gear was no object, he would just go and do it.”

James “Jay” Miller ’09, for whom Kreycik was leader for FOP and Outing Club President, said Kreycik had a “quiet strength.”

“He wasn’t at all sort of in your face about the fact that he was such an incredible athlete and so accomplished in the outdoors,” Miller said. “He was happy to be outside with anybody.”

“He was someone who had hiked across Kyrgyzstan and had done geology fieldwork in the Brooks Range in Alaska and had really been all over the world and the outdoors and had all these amazing adventures,” he added.

‘A Member of the Family’

After graduating from Harvard in 2006, Kreycik remained at Harvard as Resource Efficiency Program Coordinator, later earning graduate degrees from MIT in Urban Planning and Transportation.

Kreycik, who as an undergraduate worked in the Harvard Office for Sustainability shortly after its founding, was deeply passionate about environmentalism.

Former REP representative Summer A. Montacute ’06 said Kreycik’s dedication to sustainability was a “big inspiration” to her as an undergraduate.

“He was so committed to environmental and sustainability issues at a time when it wasn’t very popular at Harvard,” Montacute said. “He has just really stuck to the issues that he thinks are important, and that he really cares about trying to make the world a better place.”

Leith J. Sharp, who founded the Office for Sustainability and worked with Kreycik when he was an undergraduate, said he was “really beloved by everyone that worked with him.”

“He had this slight quirky combination of being like this superhuman athlete, like caring, soft, kind heart, and unrelenting passion and commitment to contribute to the world,” Sharp said. 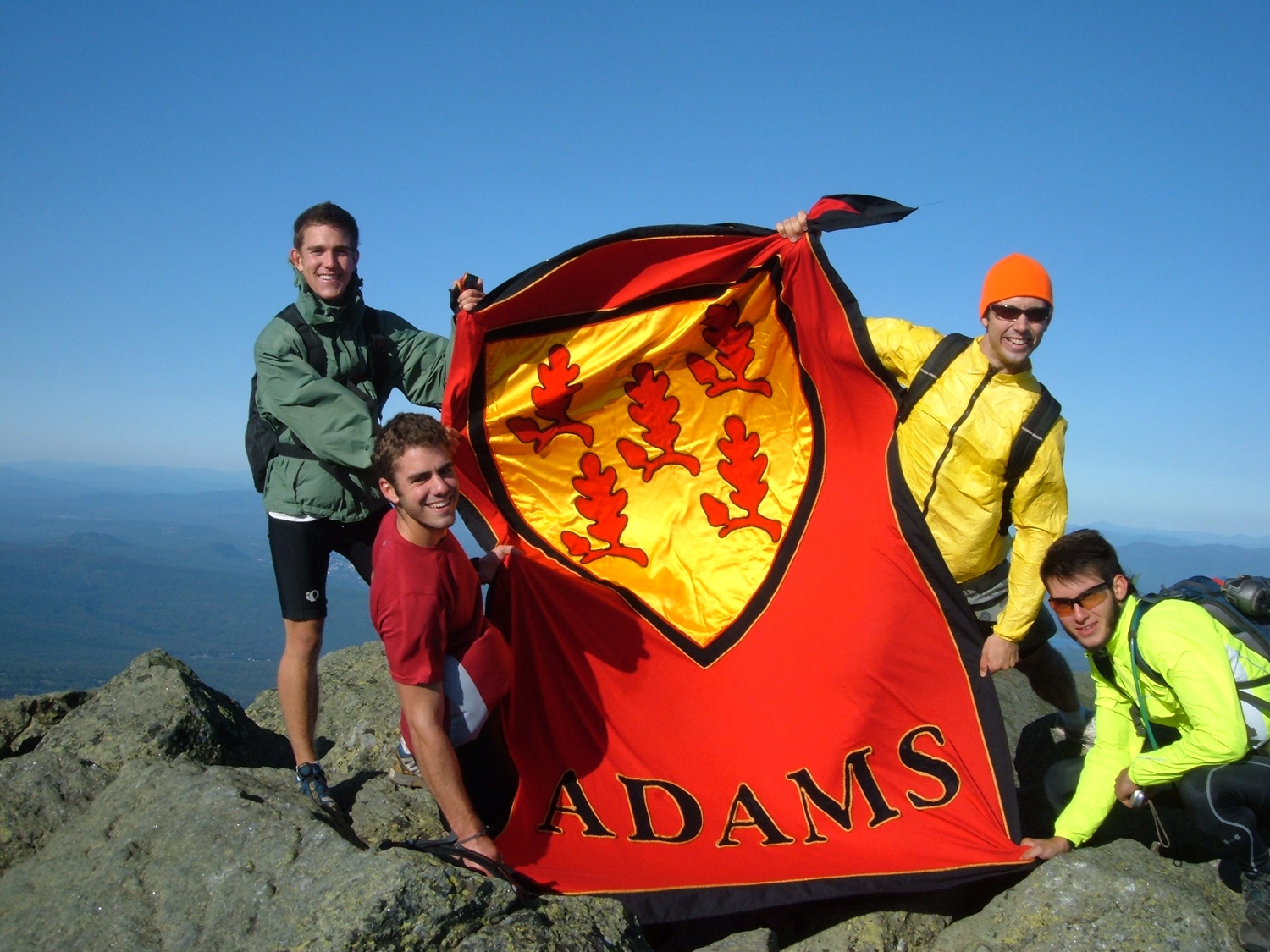 “It’s that combination of courtesy, kindness, care, intelligence, leadership, too,” Gogan said. “He just took such delight in mentoring his REPs along, and his outdoors programs’ kids, showing them that they could come skiing and introducing them to the outdoors.”

While working with REP, Kreycik also planned events for undergraduates in Adams as a Faculty Dean Aide for 11 years.

Samantha L. Houston ’11, who served as an Adams Elf with Kreycik for six years, said he had “a tremendous amount of warmth” and “a quiet intensity.”

“He was so smart and so hard working and everything he did, whether it was his job – his day job – his Elf job, his athletic pursuits,” Houston said.

“He was one of the centerpieces of the community in Adam’s House for 14 years, 15 years, being in the middle in Apthorp [House] and everything,” Sean Palfrey said. “Everybody knew him and loved him.”

Sean Palfrey officiated Kreycik’s wedding, which was held in the Adams House courtyard.

‘Living the Life That He Set Out’

After moving to Berkeley, Calif., Kreycik continued his work on transportation sustainability and clean energy as an analyst at Pacific Gas & Electric.

“He was kind of self-taught and went on to get multiple graduate degrees and become an expert in all things energy and transportation, and always with an eye towards sustainability, reducing global climate change, promoting renewable energy and clean energy,” said Nathan Gauthier, who met Kreycik through the Office for Sustainability in 2007. “The world is better because of it.”

Judy Palfrey said Kreycik would be proud of the legacy he is leaving behind.

“He took the idea of being an environmental activist and turned it into total reality,” she said. “He was living the life that he set out.”

Hundreds of volunteers joined the search for Kreycik, which friends said is illustrative of the impact he made.

“​​As heartbreaking as the events of the past month have been, it has also been incredibly heartwarming to see how many people came together in support of Phil and to try to find him,” Scot Miller said. 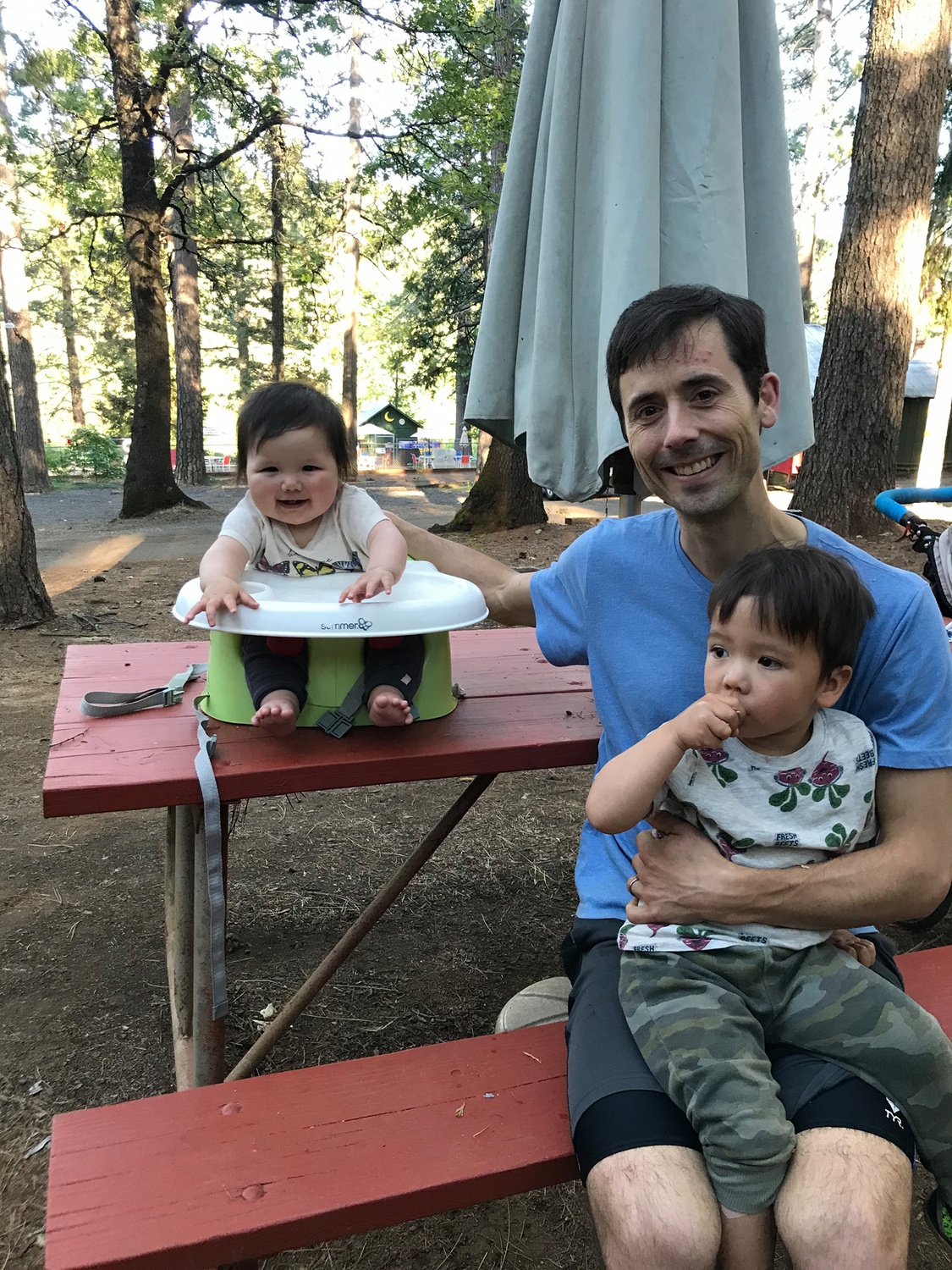 Kreycik with his children. By Courtesy of Tom Wooten

“What I wanted to get out of aggregating the volunteer searches and posting the heat maps was mostly to help the online search community, to let them know just how greatly appreciative myself and everyone was of all of the heroic efforts that they were doing,” Murray said. “It was something that I felt like I could help contribute, while being remote, to help efforts.”

When helping with the digital volunteer effort, Montacute said she was “blown away” by the coordination of the search over the period Kreycik was missing.

“There were different shifts that we were on — one shift ended, and people would just pass off to the next person, around the clock, and we would just do whatever needed to be done at that point,” Montacute said. “I don’t think there could have been a better volunteer group.”

Jay Miller, who flew to California to participate in the volunteer search effort after Kreycik was reported missing, described the professional search-and-rescue in combination with the volunteer effort as “impressive and comprehensive.”

“There were people from the surrounding community who either came out to hike and to help search or came out and brought meals and drinks and set up tents and helped to check people in and out,” Miller said. “It was really, really touching to see that outpouring of support from the local community and from other folks in the Bay Area, both those who knew Philip and those who didn’t.”

In addition to helping to create the Facebook group that grew to have 12,000 members, Wooten launched a GoFundMe fundraising page for the search effort.

“The rationale for making a GoFundMe at first was the thought that it seemed possible that the search was going to be going on for a long time and that there might start to be expenses related to the search that the family would have to bear,” Wooten said. “When it became clear that he wasn’t coming home, thoughts basically turned to his wife and children.”

Kreycik is survived by his parents Keith and Marcia, sister Claire, as well as his wife Jennifer Yao and two children.

At a news conference two days after Kreycik’s body was found in Pleasanton, Calif., Yao thanked the community for their support.

“Life is truly fragile and delicate, and the past three – almost four weeks – showed me that crystal clear,” Yao said. “Treat it with joy and kindness, and take on the hardships and the heartaches with courage and bravery.”