‘Kevin Can F*** Himself’: An Interview With Creator Valerie Armstrong 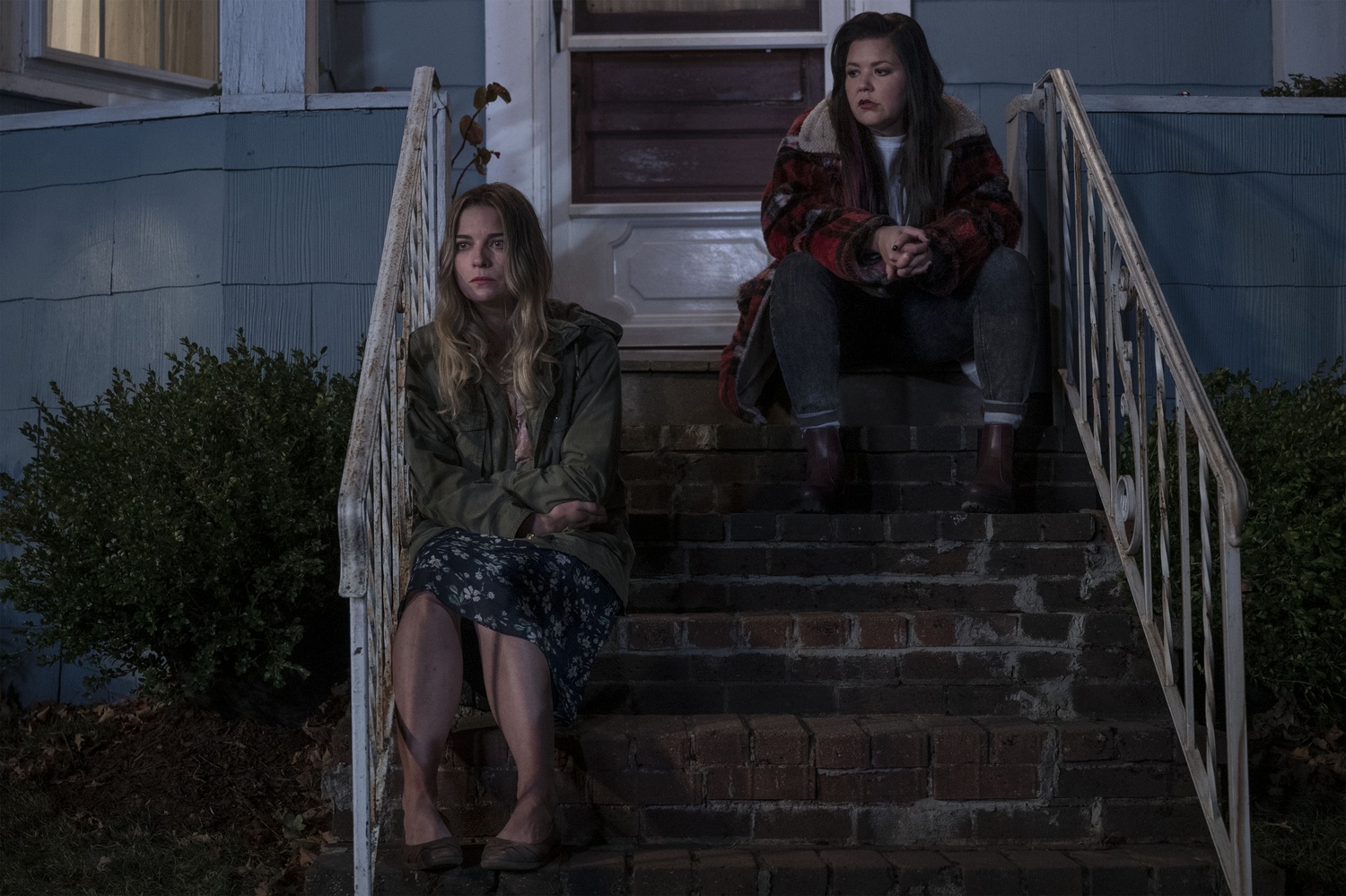 Annie Murphy and Mary Hollis Inboden in "Kevin Can F*** Himself." By Courtesy of Jojo Whilden/AMC
By Harper R. Oreck, Crimson Staff Writer

AMC’s newest dramedy series, “Kevin Can F*** Himself,” made waves over the summer with its exploration of the classic sitcom format through the eyes of Allison McRoberts (Annie Murphy), a stereotypical sitcom wife struggling to break free of that role and escape her husband Kevin (Eric Petersen). The show has drawn critical acclaim for its portrayal of Allison’s awakening and its use of two formats, multi-camera sitcom and single-camera drama. The Harvard Crimson spoke to creator, showrunner and executive producer Valerie Armstrong. [Editor’s Note: Since this conversation, AMC announced that “Kevin Can F*** Himself” was renewed for a second season.]

THE HARVARD CRIMSON: Starting at the beginning, where did the idea for “Kevin Can F*** Himself” come from, and when did you start working on it?

VALERIE ARMSTRONG: I came up with the idea now over two years ago; it was June of 2017, and I was still an assistant... And I was writing on my own time, and nobody was really interested in what I had to say, but if you're trying to be a writer and you're an assistant, you should just always be working on something. I was listening to this podcast… called “The JV Club,” and it was Janet Varney talking to women about their high school experiences, and I loved it. But on this episode, they were talking about pilot season, and about how every year they go out for the “Sitcom Wife” — still. They are always told by their agents, like, “they want a really funny woman for this role — like, she gets jokes.” And then they'd get the sides for the audition and see that all of their lines were things like, “What do you mean?” Just set-ups for the men in the room. And I remember thinking, “That sucks, how is that possible? How are these women, the women I would kill to be writing for, still auditioning for this and also not getting [the parts]?” And I got really annoyed, and I thought, “God, I bet I bet the woman married to that [sitcom] guy is actually really miserable.” And the idea sort of came to me.... it was just the first format switch, the image of it… It really excited me. And it's been over four years of working on it.

THC: The show takes place in a bleak Massachusetts town with a specific atmosphere, but the Sitcom Wife character could live anywhere. What drew you to that place?

VA: I wanted to write the people I grew up with, because I felt like I don't see them all that often on TV... I grew up in the place I'm currently sitting now: Milford, Connecticut, which is a nice little seaside town, but it's by no means fancy. [There are] a lot of hairdressers, and mechanics, and that's great — a lot of people who work to live, not live to work. And I also loved the northeastern attitude and psychology because I understand it so well, so it's easier to write. You know, “If it's nice out, that's just because it's not raining yet.”… But I knew I didn't want to set it in Connecticut, because people hear Connecticut and they assume upper-class. So I thought of Worcester, because my brother's college roommate was from Worcester… he knew all the flaws in his city, he was sort of embarrassed by it, but at the same time, immensely proud of it… And I thought that was a really good place to set this show, which has this glossy finish to it and a lot of chauvinistic, unearned pride, [showing] the rot beneath it in the single-cam.

THC: I was struck by how immersive the two different formats felt, especially the sitcom parts. How did you get in the headspace to write in two different styles?

VA: I tend to write them separately. If I'm having a multi-cam day, I’ll stay in that headspace for a while, and same with single-cam... But it is amazing — I never wrote real hard comedy, even on my own time. My samples were, like, single-camera comedy, but certainly not setup-punchline, setup-punchline. I didn't think I could do it at all. But it turns out, if you watch a ton of sitcoms growing up, you know the pace, you know what it sounds like... It's sort of all built around Kevin. It was really hard not to give [Annie Murphy and Mary Hollis Inboden] too many jokes, because they're so good at it. But it is Kevin’s show. In the first season, we're not trying to reinvent the wheel, we're trying to comment on the wheel… And then for the single-cam stuff, it was like writing anything else I've written, where I tried to keep people talking the way that people talk. A joke on set was that you know I've written a scene if the line “yes, no, I mean,” was in there, because I start and stop and stumble and say “uh” and “like” all the time, so I always write that stuff in. And I tried to amuse myself as I'm writing, and write something I'd want to watch, and write people being human, and connecting and disconnecting.

THC: Did classic sitcoms and their genre conventions inform the background characters you brought in, like Neil and Patty?

VA: Oh, yeah. I started out writing the show thinking, who are the characters who I always see, and who do I want to see more of? To me, Neil's the sidekick, and Pete is the Kevin who has begotten another Kevin. And Patty is the sarcastic neighbor. And I thought, “Oh, god, there's probably so much more going on with her.” … At the end of the day, to me, the show is not at all about a toxic marriage. The show is about two women and how women can save each other. That's what made the show worth telling… When I think about the show, it's Patti and Allison on a porch. That's all I want to write. It's all I want to watch. But everybody came out of this archetype of like a sitcom character. And in the second season, God willing, we'll explore that even more.

THC: Do you have any new goals for the potential second season, having established this double-format style and explored Allison’s character more? Are there new themes you’re hoping to explore?

VA: Absolutely. Again, God willing. The show is never about whether or not Kevin dies. It's about how Allison lives…I don't want to do anything [different] format-wise, just because it suits me. That format switch means a lot to me... To me, the first season ends with Neil in single-camera, and there's a real reason for that... the format switch is a sort of metaphor for the benefit of the doubt that these guys get to walk through life with. People ask me all the time, “What's Kevin like in single camera?” He doesn't have to be in single-camera, which is a luxury — he doesn't have to deal with the consequences of his actions, not really, because that is what a sitcom is, right? It always regenerates. They never have to deal with stuff. And so he gets to have that benefit of the doubt, that laughing audience behind him cheering him on, and so did Neil. Until that moment where he did something so egregious that even the sitcom audience can't laugh anymore…. He has to face some consequences now. And that's it sort of like Season Two is: welcome to the real f*cking world, Neil! I love the idea of playing with that. But I'm not just gonna throw Kevin in single-cam for fun, you know, it needs to be earned to me. But we are talking a lot about sort of how to play with things in the second season and not just redo a first.

THC: On a side note, do you have any advice for readers who may be interested in writing or working in television?

THC: It's so lame, but [my advice] is just to work really hard and to seem so happy to do it. There's nothing I love more, as somebody who now hires people, then somebody who seems like they just want to help — like for the team, for the show — and someone who is a pleasure to be around. You really just have to be willing to stay late, be early, always have the answers… For writers specifically, it's trite, and I hated getting this advice, but everything changed for me when I figured out how I need to write — like what my system is for getting writing done. Mine works for me — I have to write every day, I have to write for an hour with a timer, and no internet, and rules, because that's how I work. It took me a really long time to get there. I think I started doing that when I was 27. But I literally haven't missed a day since... figuring out how I am productive, how I get things done, how to how to say with confidence, “I am a writer,” without feeling like a fraud: That changed everything for me…. Figuring out what being a writer means to you, how you can actually say that and mean it… That's the most important.

— Staff writer Harper R. Oreck can be reached at Harper.Oreck@thecrimson.com