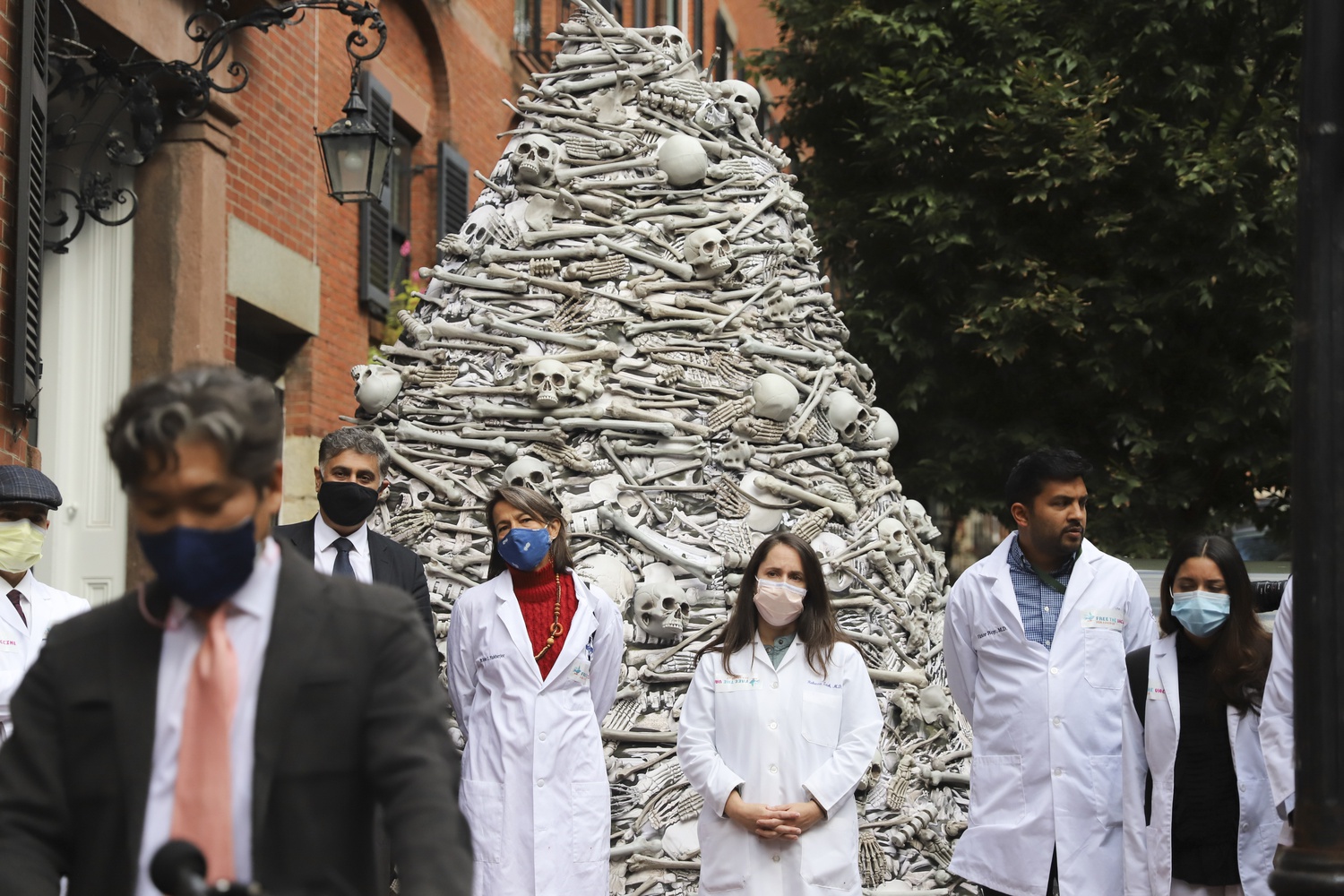 BOSTON — A group of Harvard-affiliated doctors protested outside the home of Moderna’s CEO Wednesday, calling on the Cambridge-based biotech company to expand global access to its Covid-19 vaccine.

Standing in front of a towering pile of artificial bones meant to symbolize the coronavirus’s ever-growing death toll, four Harvard Medical School faculty members said the company and its top executive, Stéphane Bancel, have a responsibility to increase supply of the vaccine outside of wealthy nations.

The group of rally attendees, which included advocates and public health experts sporting white lab coats outside of Bancel’s Beacon Hill home, called on Moderna to increase vaccine production, cooperate and share technology with other manufacturers, and commit to lower pricing for low- and middle-income countries.

Moderna did not respond to a request for comment. The firm, founded in 2010, said last fall that it would not enforce patents related to its Covid-19 vaccine.

But the rally comes amid growing pressure on U.S. pharmaceutical companies to do more to prevent the spread of the disease worldwide, including by sharing vaccination formulas with other manufacturers.

The Moderna vaccine is being used in 75 countries around the world, according to a New York Times dashboard, including the U.S. and much of Europe. Many low-income nations — including much of central Africa, where Moderna shots are sparsely available — have struggled to vaccinate their populations.

“This is continuing because men like Stéphane Bancel have decided to exploit the pandemic for profit,” KJ Seung, an HMS assistant professor, said at the rally Wednesday. “By keeping the recipe secret, Bancel and Moderna prevent other manufacturers from making the vaccine. That allows Bancel and Moderna to make the most money by selling a restricted supply to rich countries at very, very high prices.”

The rally also comes on the heels of a Covid-19 summit President Joe Biden held last week, during which he set a goal to vaccinate 70 percent of the world population within the next year and pledged to donate an additional 500 million vaccine doses to developing nations.

The summit, Seung said, “was all platitudes, pageantry, no hard plans.” 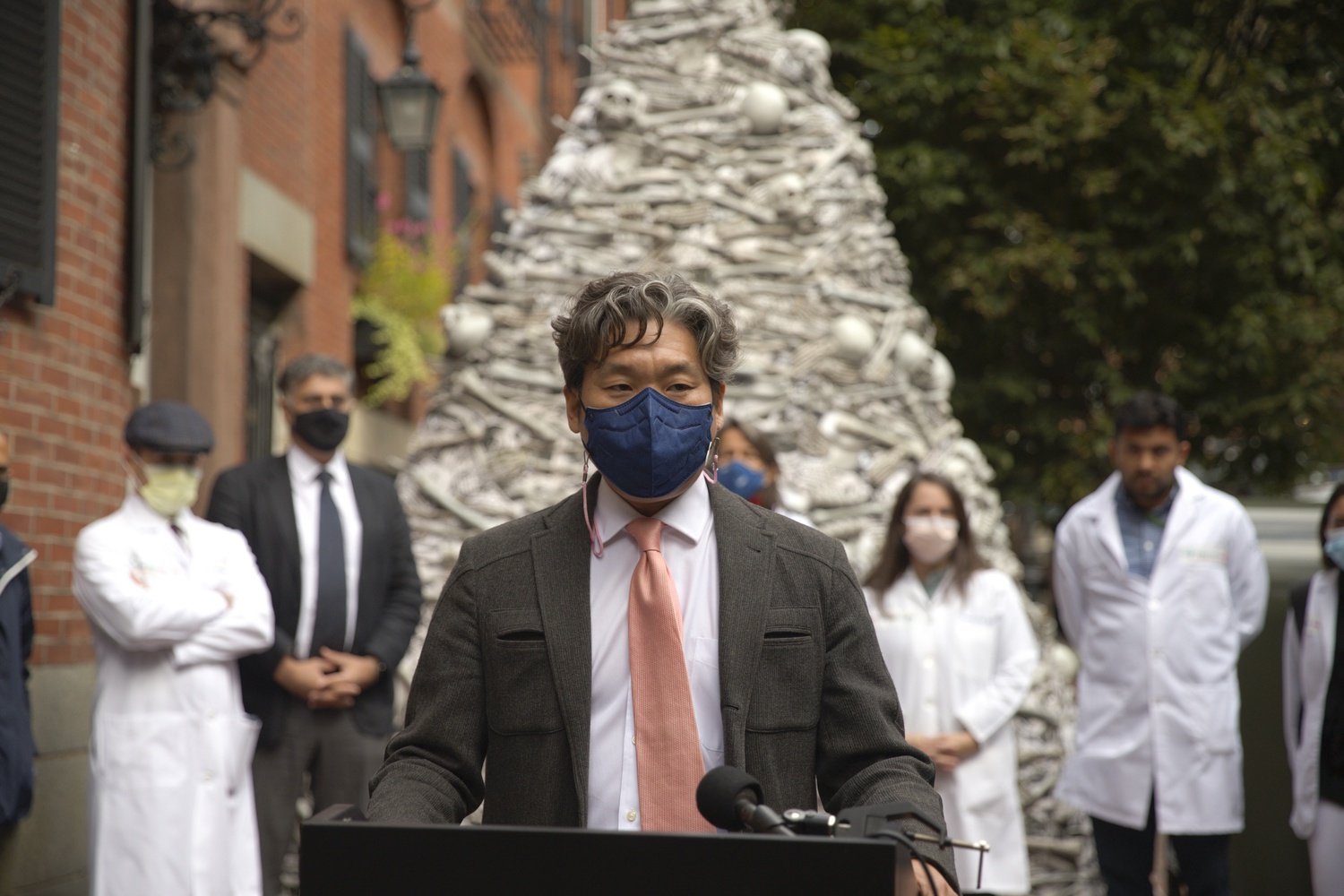 KJ Seung, an assistant professor at Harvard Medical School, speaks at a Wednesday rally during which a group of HMS-affiliated doctors called for global vaccine equity outside the home of Moderna's CEO. By Jasper G. Goodman

Rallygoers called on Biden to compel Moderna to share its vaccine technology and commit to a more aggressive vaccine donation program.

A similar rally was held outside White House Chief of Staff Ronald A. Klain’s home in Chevy Chase, Md., Wednesday.

Rebecca M. Zash, an assistant professor at HMS who has worked as a researcher and advocate to fight the HIV pandemic, said the situation is “déjà vu to what HIV was like 20 years ago.”

“It’s wrong, it’s morally reprehensible, and it’s personal to me,” she said. “It’s my friends and my colleagues in Botswana who are dying of Covid because of where they were born and their lack of access to vaccines.”