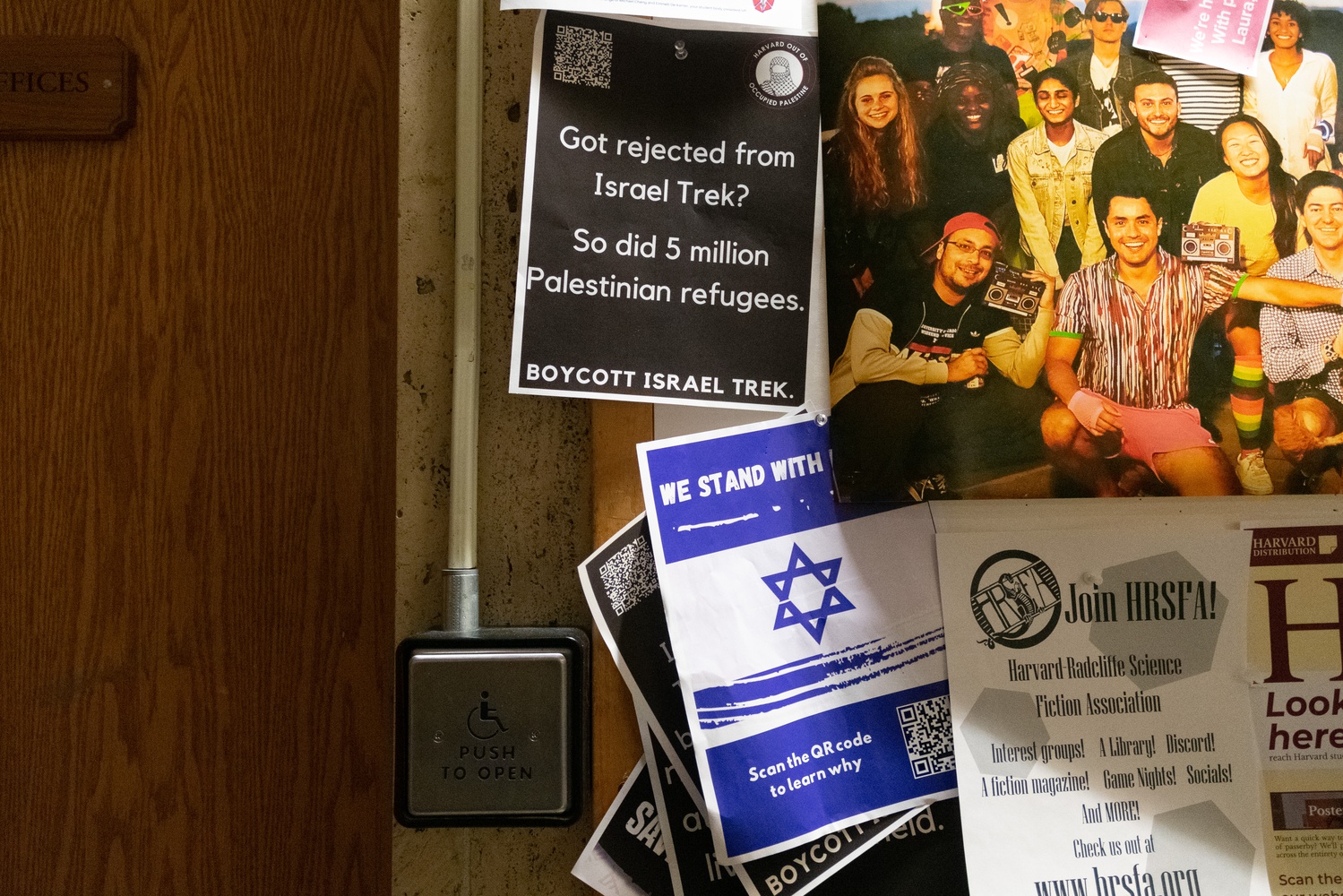 Some PSC publications decry Israel Trek as a trip that “whitewashes the crimes of a racist, settler colonial state that dehumanizes and kills Palestinians each day.” The language has drawn public criticism from some pro-Israel students over upperclassman house emailing lists and on posters across campus.

Joshua D. Willcox ’23-’24, an organizer with PSC, which calls for Harvard to divest holdings connected to Israel’s presence in Palestine, said the campaign’s goal is to “increase the awareness on this campus that Palestinians live under an apartheid regime.”

Amnesty International and Human Rights Watch have called Israel’s treatment of Palestinians a form of apartheid.

“To go on a trip, which has a very clear political motivation, and to not decide to be aware of that — and even if those people who are aware of it but decide for themselves that ‘it's a free trip, I can just go on it, I won't be involved in anything’ — is to deny what people on the ground have been calling for, what Palestinians have been calling for,” Willcox said.

Israel Trek student leader Ty L. Geri ’23 said the PSC’s criticism of the trip was “not necessarily surprising” but said Israel Trek aims to engage with a variety of perspectives by including diverse political figures in its itinerary.

“Reducing people to conflict and to hate is dehumanizing, and I think that when you’re thousands of miles away, it’s easy to dehumanize people. But when you’re there, it’s much harder,” Geri said. “We’ll always get some criticism, but we’ll always continue engaging in open dialogue.”

Members of Harvard Hillel and the Harvard Israel Initiative have denounced the PSC’s campaign. Critics of the boycott have hung pro-Israel flyers encouraging students to hear from “Israelis and Palestinians who are pro-solutions” next to the PSC’s posters around campus.

Rebecca S. Araten ’23, a Harvard Israel Initiative leader, said the boycott is “shutting down a conversation” and “completely misreading what is actually happening on the ground.”

“Those words — extreme things that aren’t based at all in fact — are being thrown around to prevent people from going,” said Araten, a former Crimson News editor. “The reality is that if people actually go on this trip, they’ll realize that those words — those terms — are not at all representative of what is actually happening in Israeli society.”

Harvard Hillel’s student president, Natalie L. Kahn ’23, said the PSC’s boycott is an attempt to “disregard any possibility of dialogue.”

“You’ll see these posters up all around campus saying, ‘your trip is free, Palestine isn’t,’ and all these other catchy phrases, but they’re not really encouraging nuance in any way,” said Kahn, a Crimson News editor. “If people really looked at the agenda, the itinerary of the Israel Trek trip, they would see that it really does try to balance both sides.”

“One of the biggest sources of pushback was that we were rejecting dialogue, whereas in reality, all PSC can really concretely do in this space — aside from encouraging people to boycott — is to create spaces for productive dialogue,” Joshi said.

PSC leaders held office hours in Claverly Hall on Wednesday evening to answer questions from students regarding the boycott. PSC members publicized the office hours through house emailing lists, which drew criticism from some students.

Alexander L. S. “Alex” Bernat ’25, who replied all to a PSC email sent over the Lowell House emailing list to criticize what he deemed “aggressive and false rhetoric,” said in an interview that “any action that singles out Israel” is anti-semitic.

“The argument of singling something out only just deflects from the wider issues and tries to distract from the fact that we have a very strong reason to be standing up for this cause because we are very much part of the issue itself,” Joshi said.

An exchange in the Dunster House email list led to intervention from the house’s faculty deans, who affirmed in a housewide email that they “reject prejudice of all kinds, including Islamophobia and antisemitism.”

Joshi said criticism of the boycott comes “from a perspective that aims to minimize the work that PSC is doing.”

“While there is criticism surrounding the language that we’re using — surrounding the semantics — in the end, we’re just trying to do what we can to undo some of the complicity that we have as Harvard students,” Joshi said.

A previous version of this article incorrectly stated that Harvard Hillel is the Harvard College Israel Trek’s parent organization.