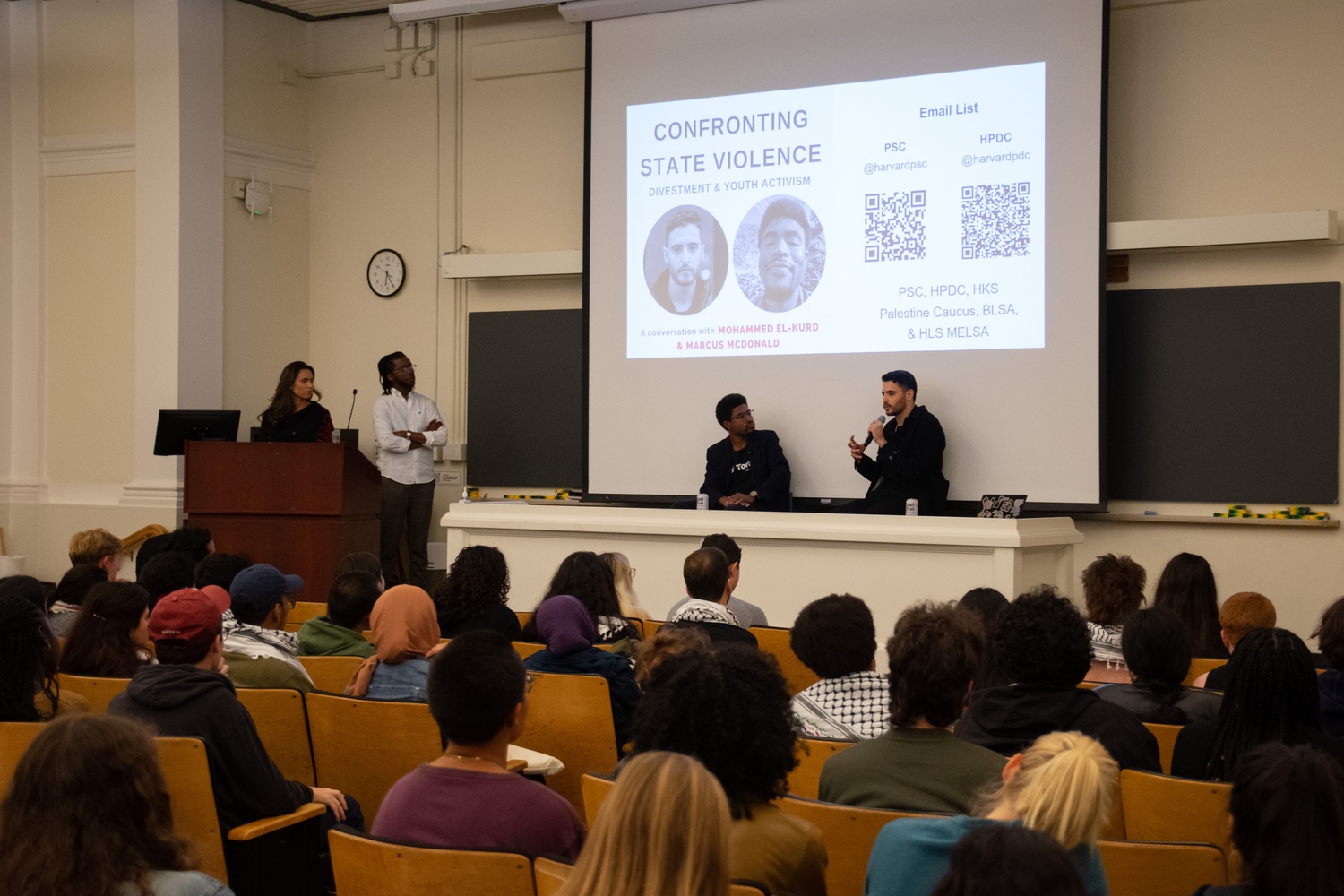 Shortly after the event began, the protesters entered the lecture hall and held signs in the back of the room.

During Monday’s talk, El-Kurd described his experience with “violence that is systematically, institutionally sponsored.” El-Kurd grew up in Sheikh Jarrah, a neighborhood in East Jerusalem.

El-Kurd, a 24-year-old activist and outspoken critic of Israel’s occupation of Palestine, has drawn criticism from pro-Israel organizations like the Anti-Defamation League and campus groups like Harvard Hillel and the Harvard Israel Initiative for rhetoric they deem antisemitic.

At Monday’s event, El-Kurd criticized the media’s depiction of Palestinian activists, saying they are labeled in the “binary of tropes of either a terrorist or a victim.”

McDonald discussed his activism against racism and white supremacy as the lead organizer of the Charleston Black Lives Matter chapter.

“Specifically state-sanctioned violence is something we’ve seen since we got here,” McDonald said. “If you look at the history, you can see that it’s rooted in white supremacy, it’s rooted in race-based violence.”

Harvard Hillel president Natalie L. Kahn ’23, who helped to organize the protest of the event, said while she believes “dialogue is very important,” El-Kurd’s rhetoric has “crossed the line.”

“The kind of ideology that the PSC is espousing, when that’s the kind of speaker that they’re inviting in — they can’t claim to be for peace and dialogue or for really any kind of conflict resolution,” said Kahn, a Crimson News editor. 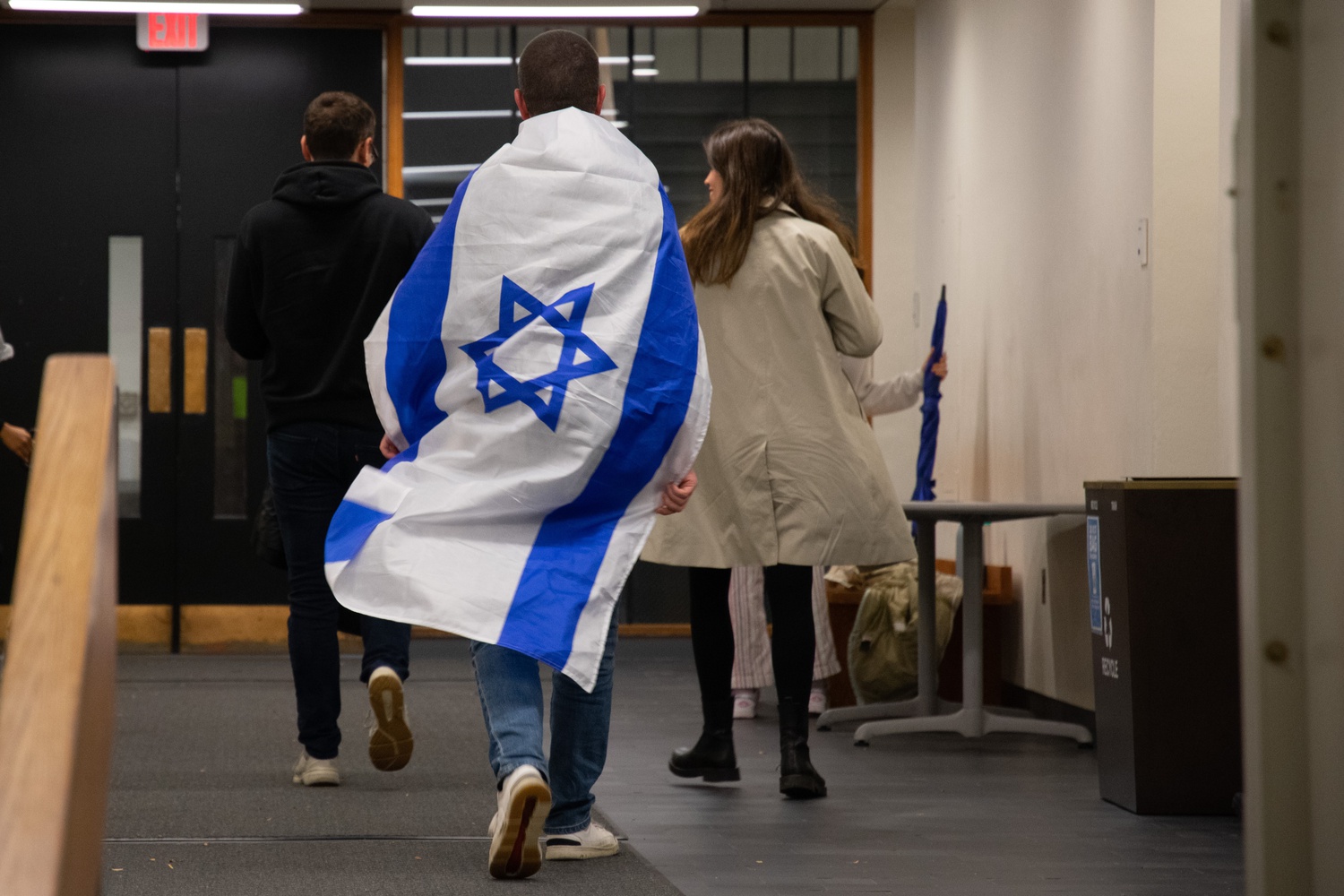 In response to criticisms of the event and speaker, PSC organizer Joshua D. Willcox ’23-’24 said PSC “condemns all forms of discrimination, antisemitism included.”

Protester Shira Z. Hoffer ’25 said while she feels El-Kurd’s “rhetoric often slips from anti-Israel, anti-Zionist sentiment into antisemitism,” she supports his invitation to campus as a means to strengthen academic discourse.

Still, Ph.D. student J.J. Kimche, who also protested, said he had hoped the event would be “blocked” by the administration.

A Harvard College spokesperson wrote that “freedom of expression is essential to a liberal arts and sciences education” in a statement to The Crimson following the protest. 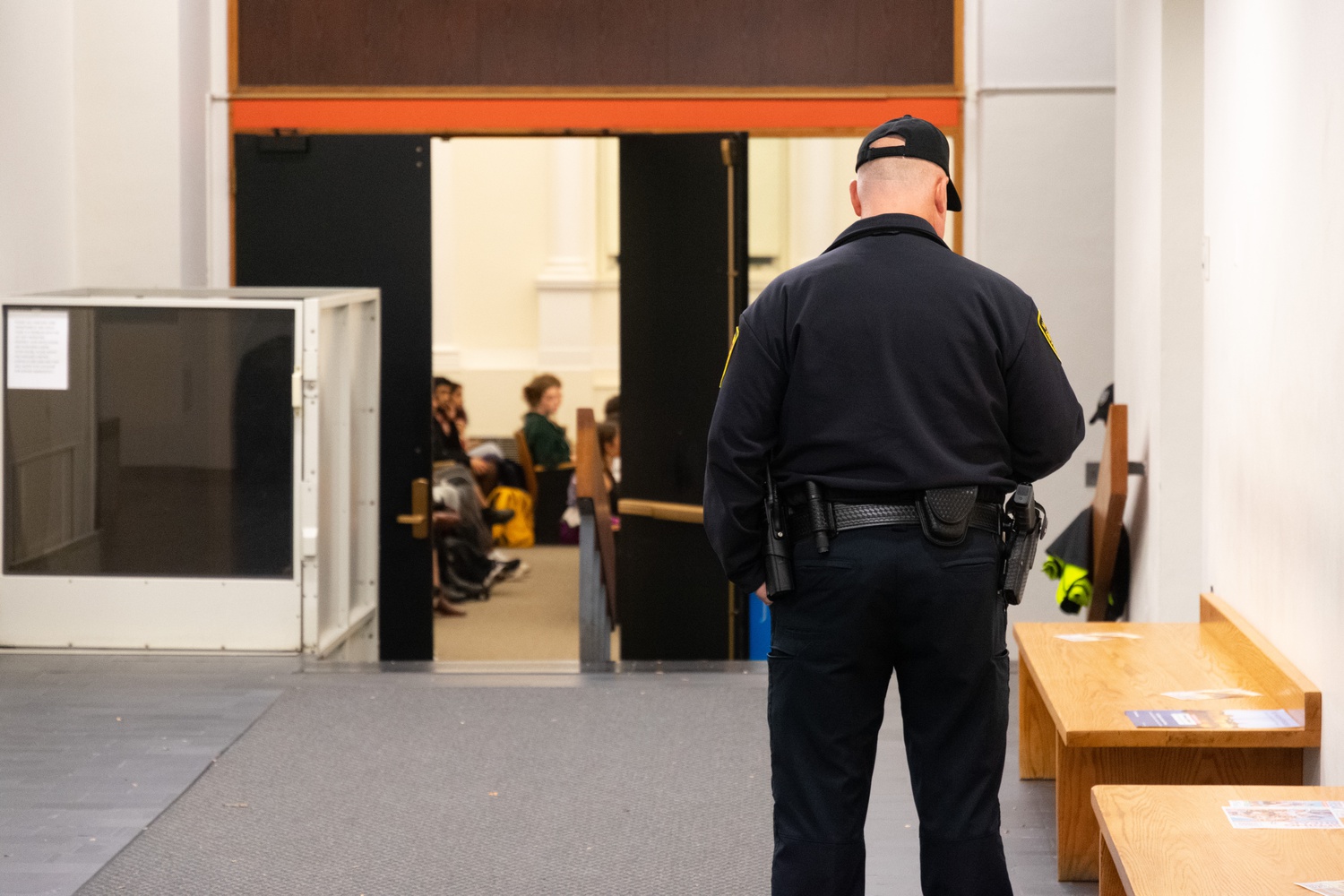 More than a dozen Harvard University Police officers were stationed around Harvard Yard on Monday, checking student IDs at entrances to the Yard. Officers were also stationed inside Emerson Hall, where the event took place. By Julian J. Giordano

During the event, El-Kurd advised young activists to “remember that liberation requires sacrifices,” citing the backlash he has received.

“People protesting my advocacy, people smearing my name, spreading disinformation about me, could not move a hair on my body,” El-Kurd said during the event. “It’s not because I’m strong, and it’s not because I’m powerful, but because when you put it in perspective, what’s a bunch of whiny Ivy League kids going to do to me?”

Willcox said focusing on the protest rather than on the event’s cause “only contributes to decentering the narrative completely and shifting focus away from the discourse that can be productive.”

“After someone has spoken about state violence, about ethnic cleansing and the liberation of Black people in this country, and Palestinians, and the only form of interaction that [The Crimson] wants to be written about is the form of backlash — it just ultimately speaks volumes about the reduction of the issue to this one narrative,” Willcox said.

Asmer A. Safi ’23-’24, an organizer for PSC, praised the event for drawing attention to the cause of divestment and “bringing in people from all different walks of life.”

“That’s something that shows the changing of narratives that’s taking place on campus by virtue of the turnouts that we keep getting, and turnouts that keep increasing all the time,” Safi said. “People understand that there’s more to the cause than just the blatant attacks that we get each time.”