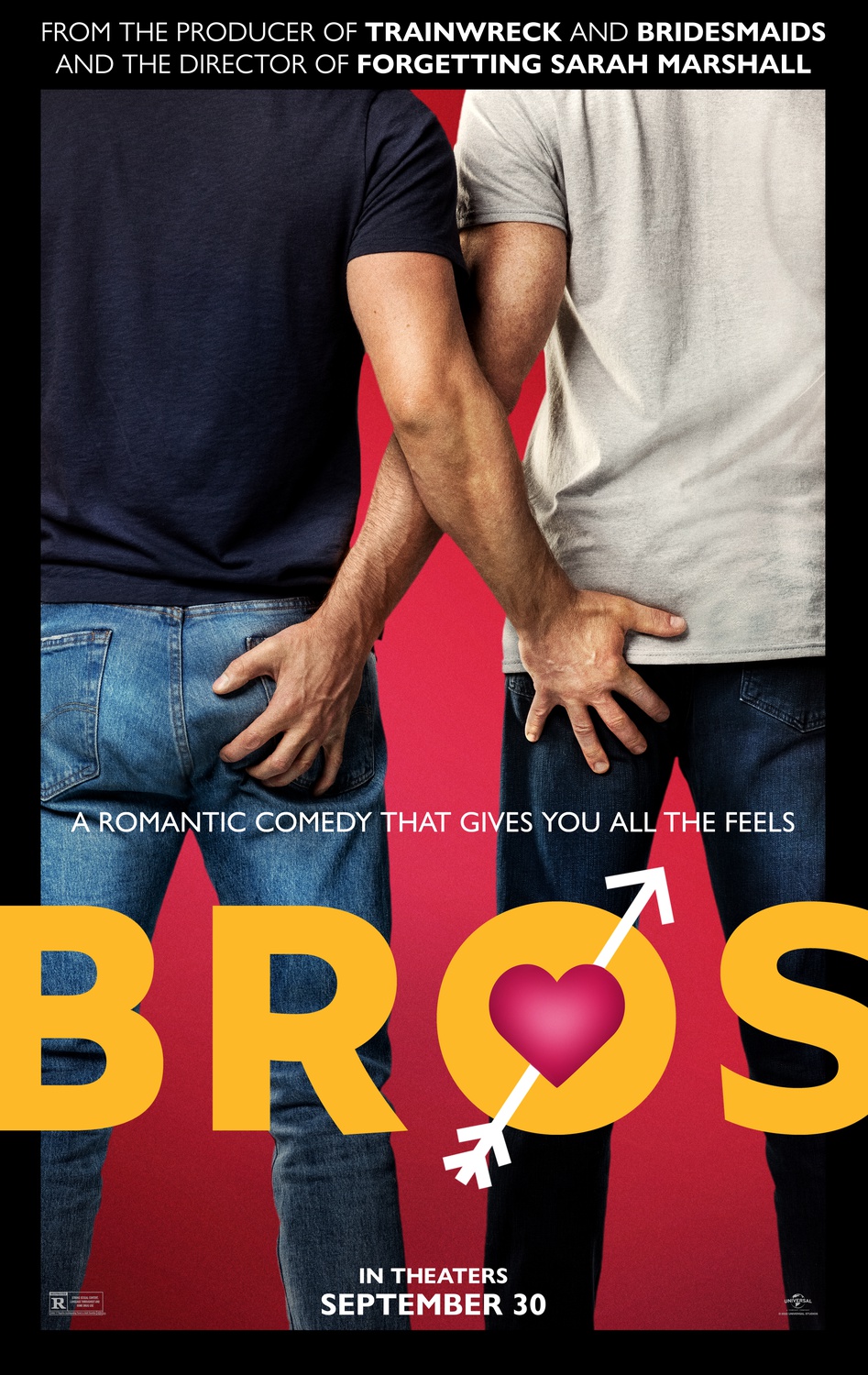 While "Bros" is notable for being one of the first gay romantic comedies from a major studio, its boundary-breaking nature cannot make up for what it lacks in the way of consistent humor and strong performances. By Courtesy of EPK.TV
By Brady M. Connolly, Crimson Staff Writer

Do you even laugh, bro?

In “Bros,” the new romantic comedy from famed producer Judd Apatow, the answer to this question is a resounding “sometimes.” Billy Eichner, best known for his iconic series “Billy on the Street,” co-wrote the film’s screenplay and also stars as the sarcastic yet lovable protagonist Bobby Lieber. Despite constantly mentioning to his friends that he is “emotionally unavailable,” Bobby finds himself falling for Luke Macfarlane’s Aaron, a buff lawyer who also fears committing to their burgeoning relationship.

While the film is notable for being one of the first gay romantic comedies from a major studio, its boundary-breaking nature cannot make up for what it lacks in the way of consistent humor and strong performances.

By marketing itself as a new R-rated comedy from Eichner, one of the funniest and most boisterous comedians working today, “Bros” sets high expectations for the level of humor at which it will operate. And in many moments, this bar (or something near it) is reached, with Eichner’s highly niche popular culture quips hitting the mark. Specifically, Eichner’s jokes about having the lanky phsyique of a grown-up Evan Hansen, the cliché nature of “The Office” gifs, and straight actors playing gay characters to win Oscars were pitch perfect, eliciting the type of uproarious laughter from the audience that is increasingly rare in movie theaters today. Such sharp and observant sarcasm, which has always been Eichner’s trademark, certainly keeps the film afloat.

Unfortunately, these sporadic moments of laughter fail to make the movie consistently enjoyable, and it often suffers under the weight of its own mission to be a defining gay romantic comedy. While increased representation in Hollywood is undoubtedly a good thing, “Bros” feels slightly heavy-handed in its pursuit to remind audiences that they are watching a film about being gay in modern America. This singular focus seems to restrict some of Eichner’s obvious comedic talents, limitting the possibility for more subtle and varied cultural commentary that is not contingent on having an explicitly gay-centric punchline. (For evidence of a recent romantic comedy that achieves a greater level of nuance in its humorous analysis of the gay experience, viewers should watch Andrew Ahn’s “Fire Island.”)

Despite some of its comedic shortcomings, “Bros” largely succeeds at fulfilling its promise to be a romantic movie. The chemistry between Bobby and Aaron is playful and believable, leading the audience to be genuinely invested in the outcome of their predictably tumultuous relationship. It is in the realm of romance that the film explores the idiosyncrasies of the gay experience with far more thoughtfulness, as Eichner expertly hones in on the many differences between straight and gay relationships. Employing the ironic adage “love is not love,” the film foregrounds a diverse array of queer characters who share their experiences of romance with heartfelt meaning. The pinnacle of all these moments occurs when Bobby shares his self-confidence struggles with Aaron on a beach in Provincetown, by far the most moving and powerful scene in the film.

As for the acting — Eichner’s performance feels lived-in yet slightly strained, with moments of Bobby’s anger coming across as particularly shaky. However, all is forgiven when Eichner tosses out his masterfully searing criticism or a witty remark, often sealing the deal with a cartoonish eye roll. Macfarlane plays a hyper-masculine foil to the effusive Bobby, and he is perfectly adequate at slowly revealing glimpses of Aaron’s more vulnerable side. Aside from the two main characters, there are several well-placed cameos in the film, with Debra Messing and Bowen Yang providing particularly fantastic moments of engaging, unbridled comedic chaos.

Ultimately, “Bros” ends up being a rather run-of-the-mill romantic comedy, which would be entirely sufficient if it were not for the knowledge of Eichner’s remarkable comedic prowess. Audiences should be sure to familiarize themselves with “Billy on the Street” YouTube clips after the film, as that is the format where Eichner truly dazzles. However, no harm will come to those who buy a ticket for this movie and subject themselves to watching Bobby try to shove through a crowd of gay men in a club who just “can’t stop voguing,” and other such gags. Billy on the Big Screen may not change the world, but it’s an admirable attempt and a positive step towards greater inclusion in Hollywood.