Aadil Abedi Paints in Harmony with Poetry Recitation at HDS 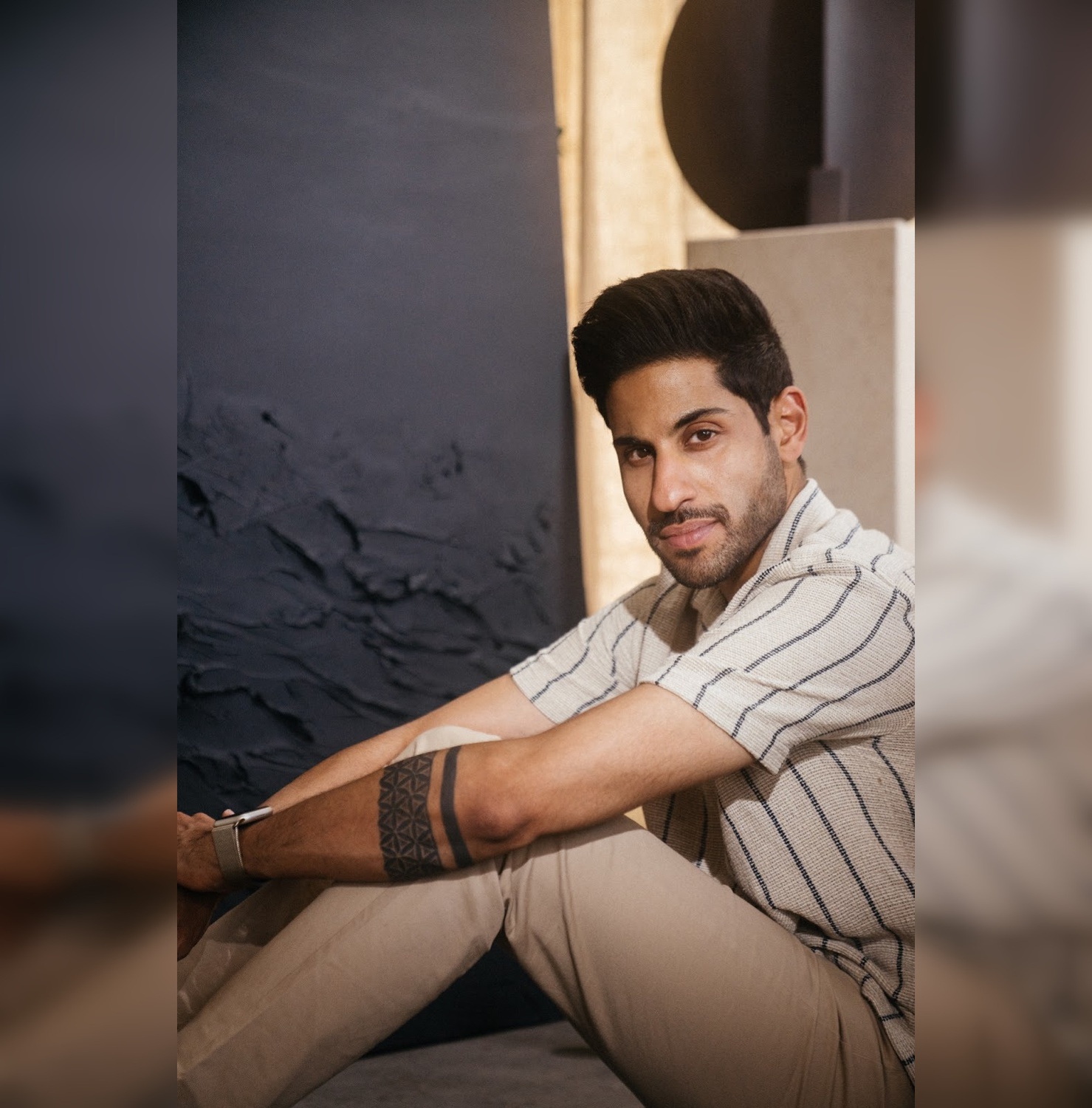 On the evening of Oct. 13, dozens of students filed into Swartz Hall, escaping the rain to attend “Qahwa, Kalam, and Calligraphy,” a program hosted by the Harvard Divinity School. The event highlighted the masterful craft of visual artist Aadil Abedi as he painted in real time alongside poetry recitations from Divinity School students covering a range of Middle Eastern and Southwest Asian languages.

Serving as haven from the stormy gloom outside, the Braun Room was abuzz with a warm, animated energy — a caffeinated energy, perhaps — which could be attributed to the chai and qahwa, traditional Arabic coffee, being passed around.

Indeed, coffee is historically intertwined with the culture of Arabic poetry. The ambience of the maqha, or coffeehouse, was very much evoked in the rich poetry and painting of the night.

The event was organized and run by Serena Rasoul, a resident fellow at the Divinity School this semester. Through her company MA Casting (formerly Muslim Casting), Rasoul strives to elevate the work of artists from MENA/SWANA and Muslim backgrounds. In an interview with The Harvard Crimson, Rasoul discussed the motivation behind organizing this event.

“Taking a Mysticism class with Dr. Ali Asani and meeting so many talented peers inspired me to connect my networks by bringing my friend and world-renowned artist Aadil Abedi to perform a live calligraphy session to a chorus of poetry reciters from HDS in Arabic, Urdu, Farsi and English,” Rasoul said.

The mysticism class that Rasoul was referring to is “Introduction to Islamic Mystical Traditions,” a course cross-registered with the College and the Divinity School. Indeed, most of the poetry reciters of the night were also enrolled in the class. This semester, Shaharyar Zia MTS ’19 is teaching alongside Professor Asani, who himself took the class back in 2017, when he was studying for his graduate degree at the Divinity School. Five years later, as a PhD student in the Near Eastern Languages and Civilizations Department focusing on Islamic intellectual history, Zia is now experiencing the class from the position of a teaching fellow.

“We [in the class] try to situate ideas in their cultural, social and intellectual contexts,” Zia said. “Lately, we have been discussing how, in the Western academy, we are often conditioned to think of many fields [and] sciences as completely distinct.”

But that is not always an accurate assumption for non-Western domains of thought; in Sufi framework, for example, religion, philosophy, poetry, cosmology, and medicine all exist in interwoven spheres.

“That is why somebody writing on Sufi healing could quote you Mawlānā Rūmī in their manuals, while at the same time talking about the Galenic system of medicine,” Zia said. “And you shouldn't be surprised to find poetry even in a text on fiqh (jurisprudence) or on ilāhiyāt (metaphysics). In fact, some people, especially some Sufis, used only poetry to express their philosophical and metaphysical ideas in the Islamic tradition.”

Zia also performed during the event, first presenting some of the Rubāʿiyāt (quatrains) by famous Persian poet Omar Khayyam, whose poetry utilizes symbols of nature to ponder on “the transitory nature of this life.”

As Zia said, Khayyam’s poetry reflects how we come from mud and are supposed to return to it. Interestingly, Zia’s second recitation (a selection from the work of Rumi) was performed in a slightly different tongue, to foster the atmosphere of linguistic diversity.

“This second piece I recited in the Indo-Persian dialect, known as Sabk-e Hindī, to give the audience a feel of the diversity within the Persian language as well,” Zia said.

This understanding of poetry as omnipotent, as transcending disciplinary boundaries put forth by Western framework, seemed to permeate through the air at the event. Abedi, too, expressed his belief that the beauty of Arabic poetry and its script surpasses constructed shackles of religion, nationality, and ideology. With ancestors from Iran, family from India, and personal life rooted in London, Abedi’s amalgam of identities imbues in his work an earnest artistic voice. 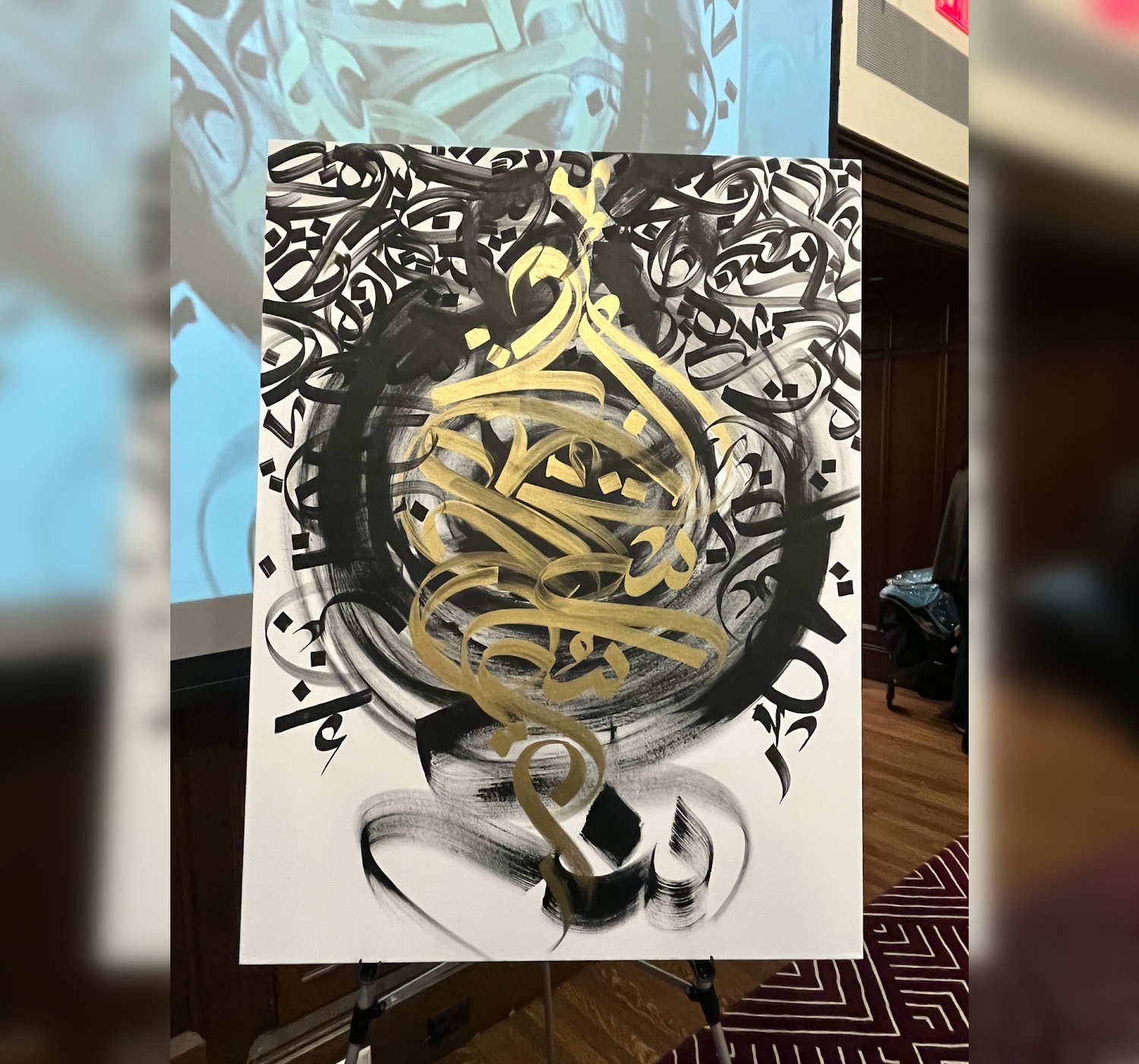 The piece Abedi created during the event. By Courtesy of Aadil Abedi

“I feel it’s extremely important, especially in the world we live in now, to be a flag-bearer for the beauty of our faith,” Abedi said.

Rasoul spoke to a similar point, iterating that Islamic art suffers from harmful stereotypes in the contemporary world.

“Despite what media representations may have you think, [our] communities are rich with centuries of artistic tradition in the forms of poetry, calligraphy, architecture, and music... reflecting a sense of self-identity, communal history, and spiritual connection,” Rasoul said.

Abedi has painted for a vast array of figures, ranging from Pakistani-British comedian Riz Ahmed, to Bollywood actress Aishwarya Rai Bachchan. Just this past year, he worked with Disney to create a mesmerizing “Aladdin”-influenced piece for Eid al-Adha.

“Arabic to me is such a beautiful language and script, and if, through this medium, I can change hearts and minds and engage people into positive conversations around my artwork and the broader approach to faith, culture and traditions… then my responsibility as a creative would be met,” Abedi said. “To me, there’s so much grace and compassion within our texts, and being able to turn them into pieces of art which adorn people's private spaces, is so humbling."

Indeed, Abedi’s humility was just as transfixing as his artistic skill. Though clouds hung heavy and rain filled the air, the HDS community found warmth in the immersive beauty of painting and poetry.

“Despite it being one of the rainiest nights of the semester,” Rasoul said, “We were able to fill the room to capacity with over 75 people, all eager to connect, all eager to feel the beautifully poetic experience of soft love woven into our century's old artistic traditions — one we don’t get to celebrate often.”

Zia iterated a similar feeling. “If any place could conduct such an event with such charm, it had to be HDS.”

—Staff Writer Aarya A. Kaushik can be reached at aarya.kaushik@thecrimson.com.