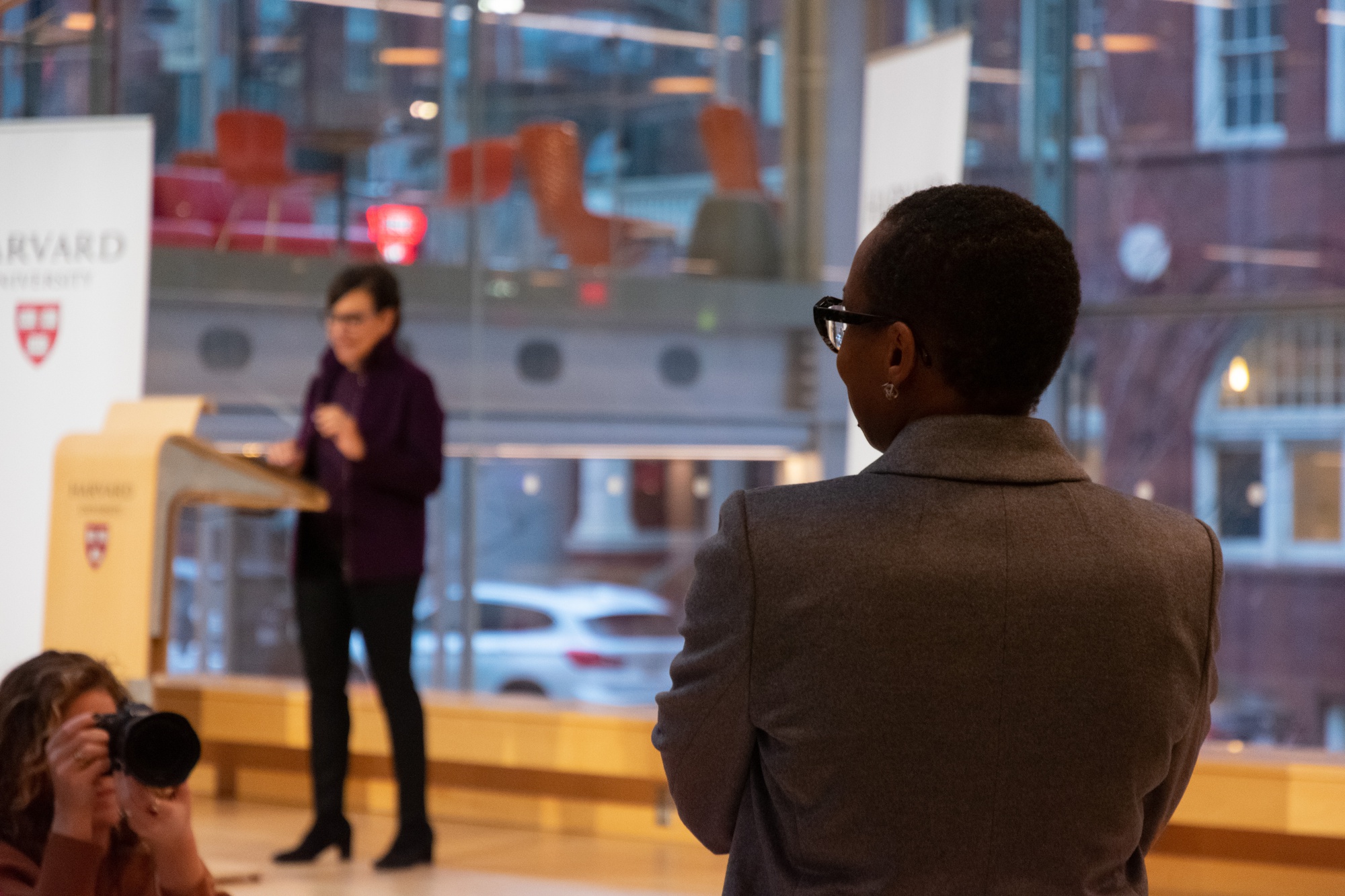 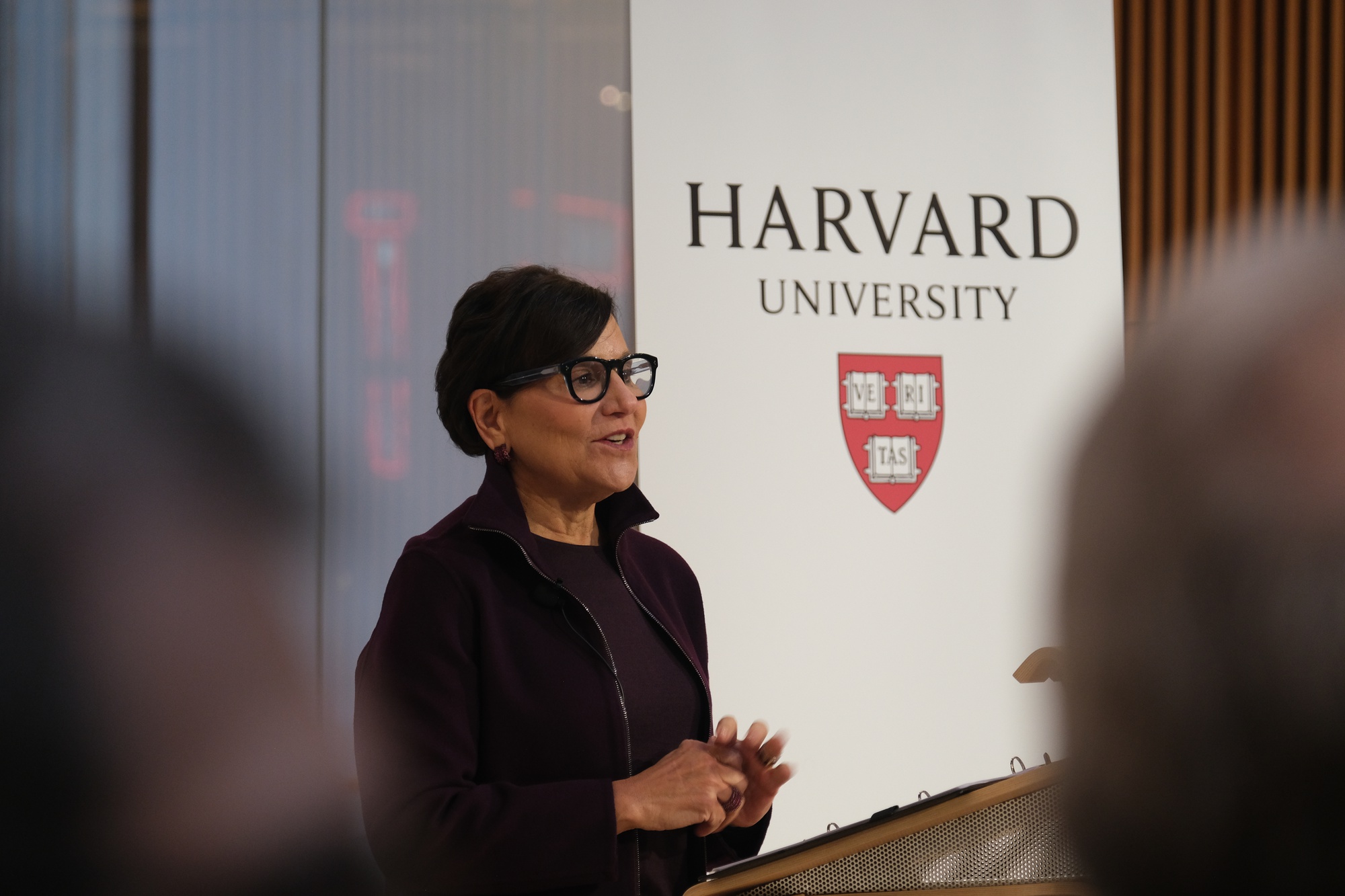 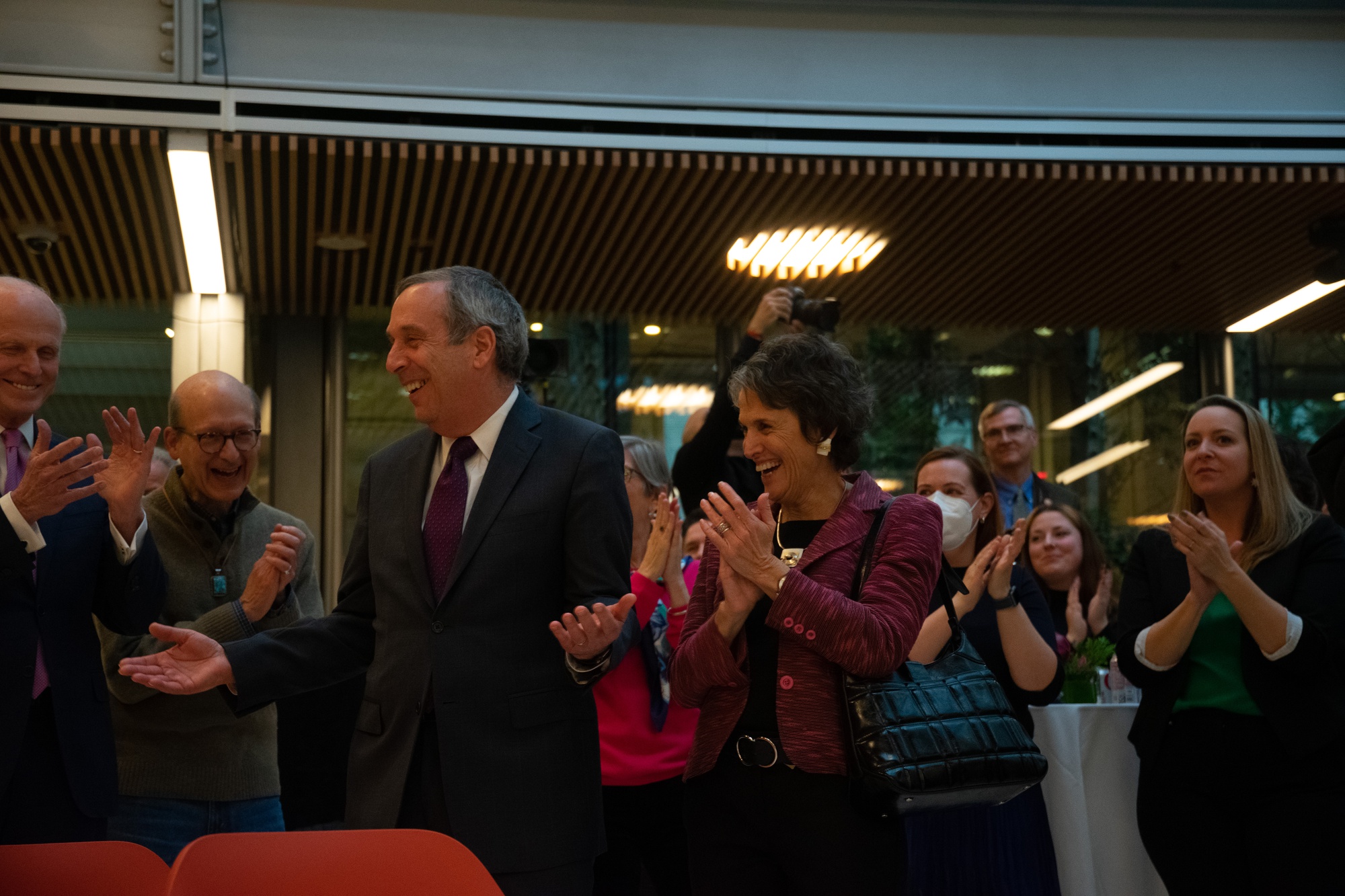 Outgoing University President Lawrence S. Bacow will step down in June 2023 after just five years in Harvard's top job. He and his wife Adele F. Bacow attended the event on Thursday to welcome Gay into her new role as president-elect.

"I've been privileged to work with Claudine for the last five years," Bacow said. "I think she's a brilliant academic. She's proven herself as a very able administrator. I think she's a person of vision, but also someone of great integrity and impeccable character." 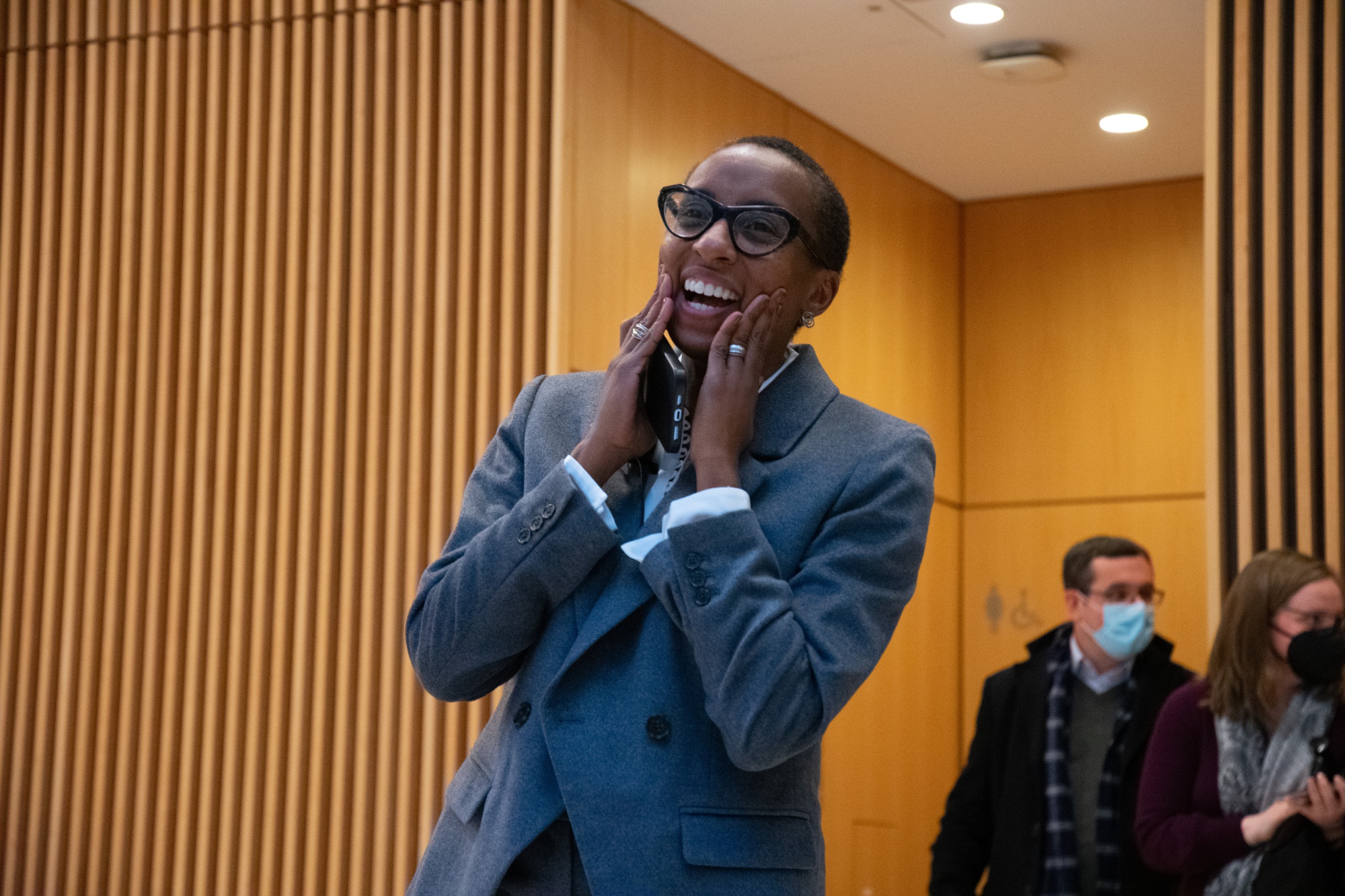 The Harvard Commons of the Smith Campus Center erupted into applause as Gay entered the atrium. When Paul Andrew, vice president of Harvard Public Affairs and Communications, first attempted to start the public broadcast, the cheers and clapping only got louder. 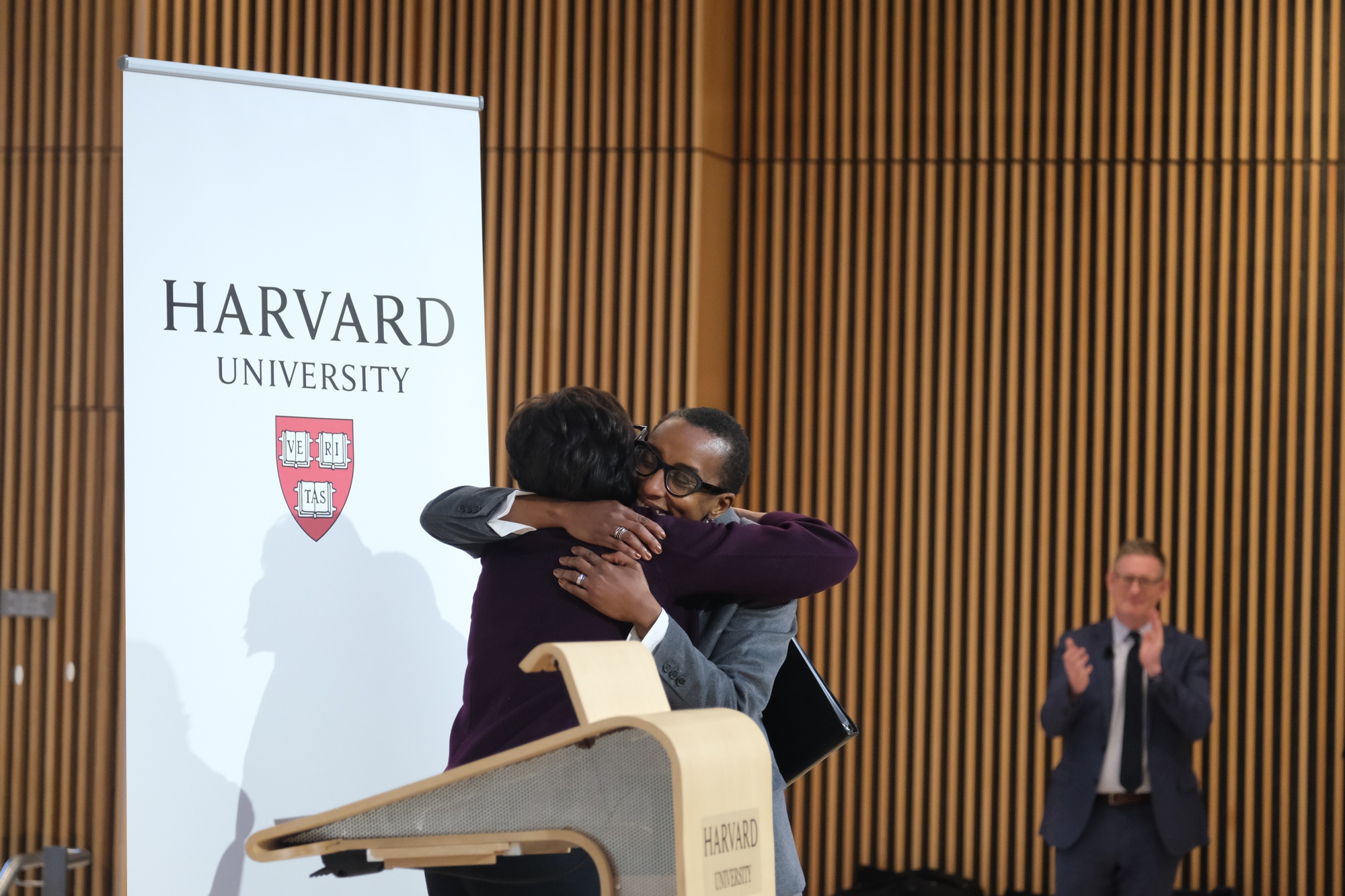 Immediately following the announcement of Harvard's 30th president, Pritzker welcomed Gay to the stage for brief remarks. When she took to the stage, Gay joked that she didn't expect so many people to attend the reception — “I thought I was the only person still on campus” — before talking about her upbringing as a daughter of Haitian immigrants, immersion into academia, and vision for Harvard. 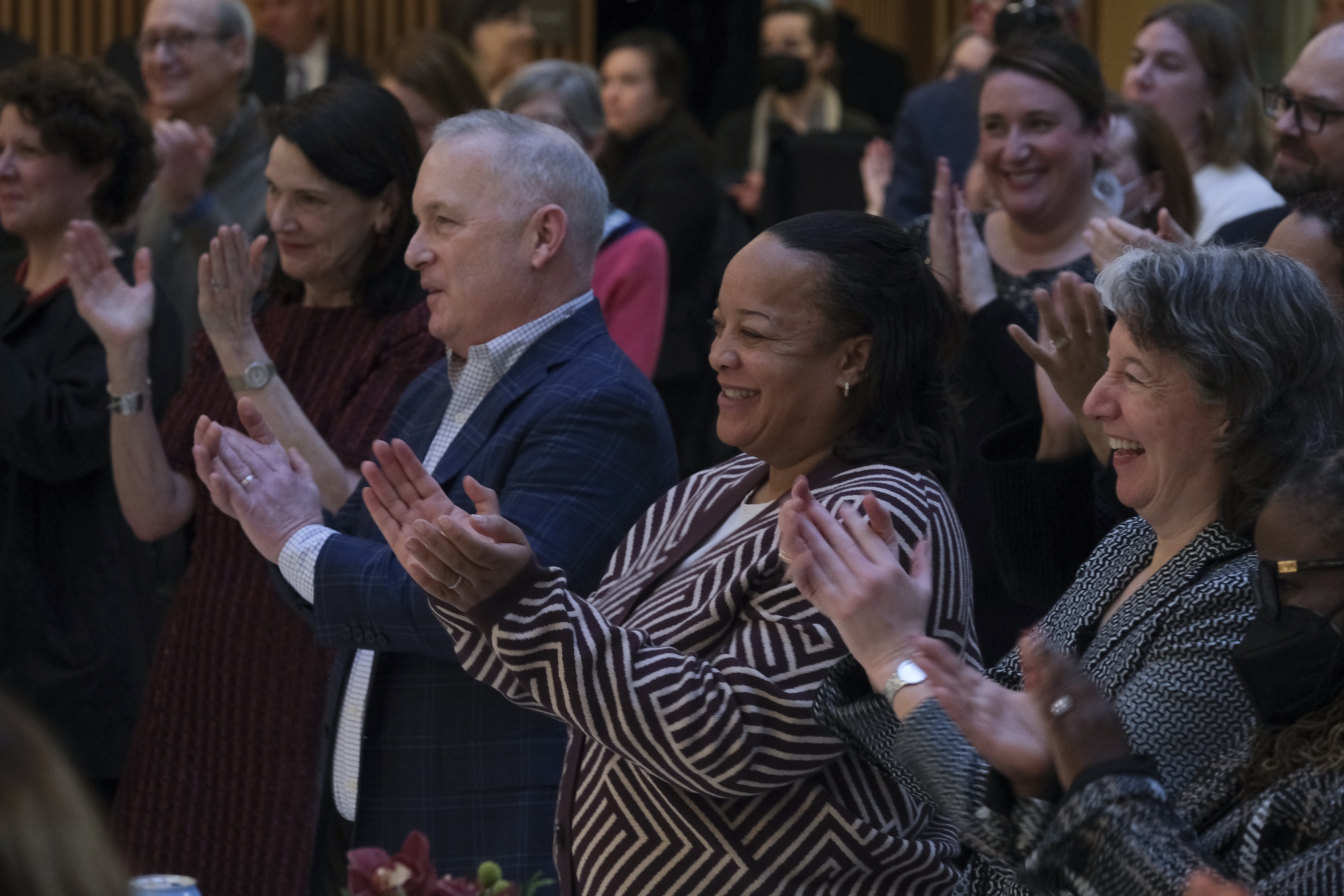 Harvard Graduate School of Education Dean Bridget T. Long (center) was one of several University Deans in attendance. In the hours since the announcement of Gay's presidency, many members of Harvard's faculty have expressed confidence in her appointment. 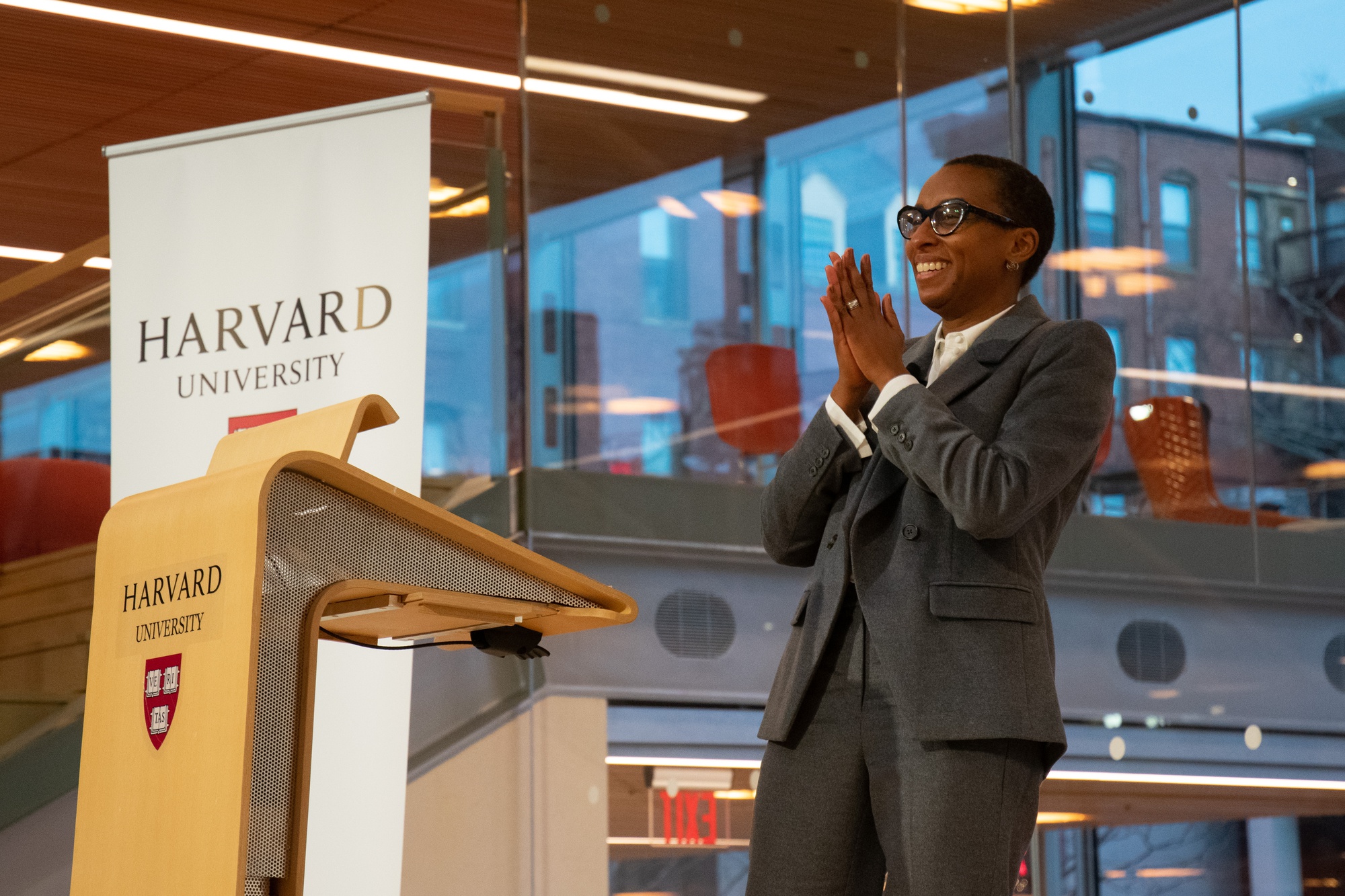 Gay, the current dean of Harvard’s Faculty of Arts and Sciences, will be the first person of color and second woman to serve as Harvard University president. 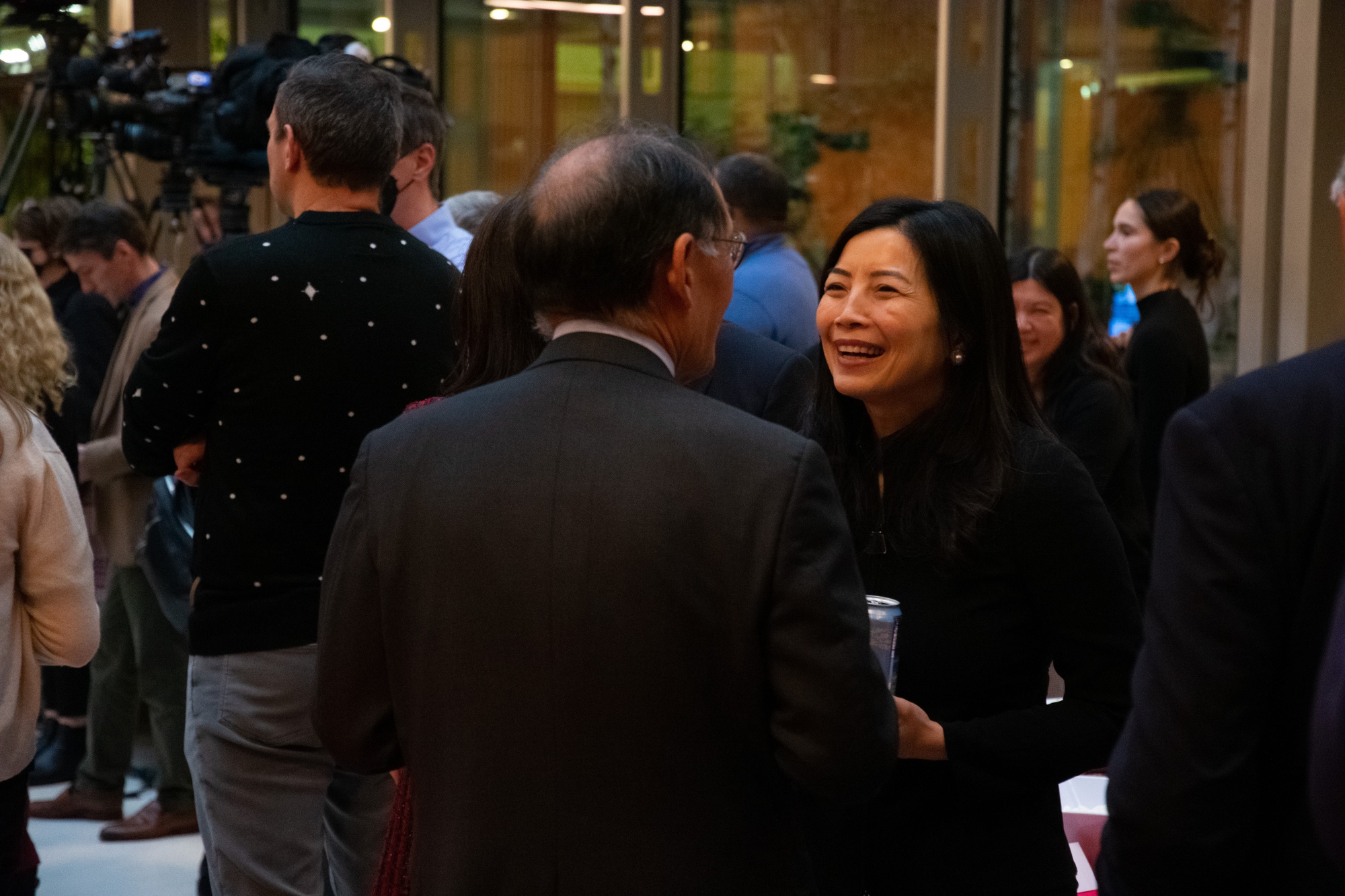 Tracy Palandjian ’93 (right) filled the seat on the Harvard Corporation William F. Lee ’72 (left) vacated in July. Lee served as the Corporation’s senior fellow before Pritzker assumed the role on July 1. The selection of the new University president was the first test of Pritzker's leadership as head of the University's highest governing body. 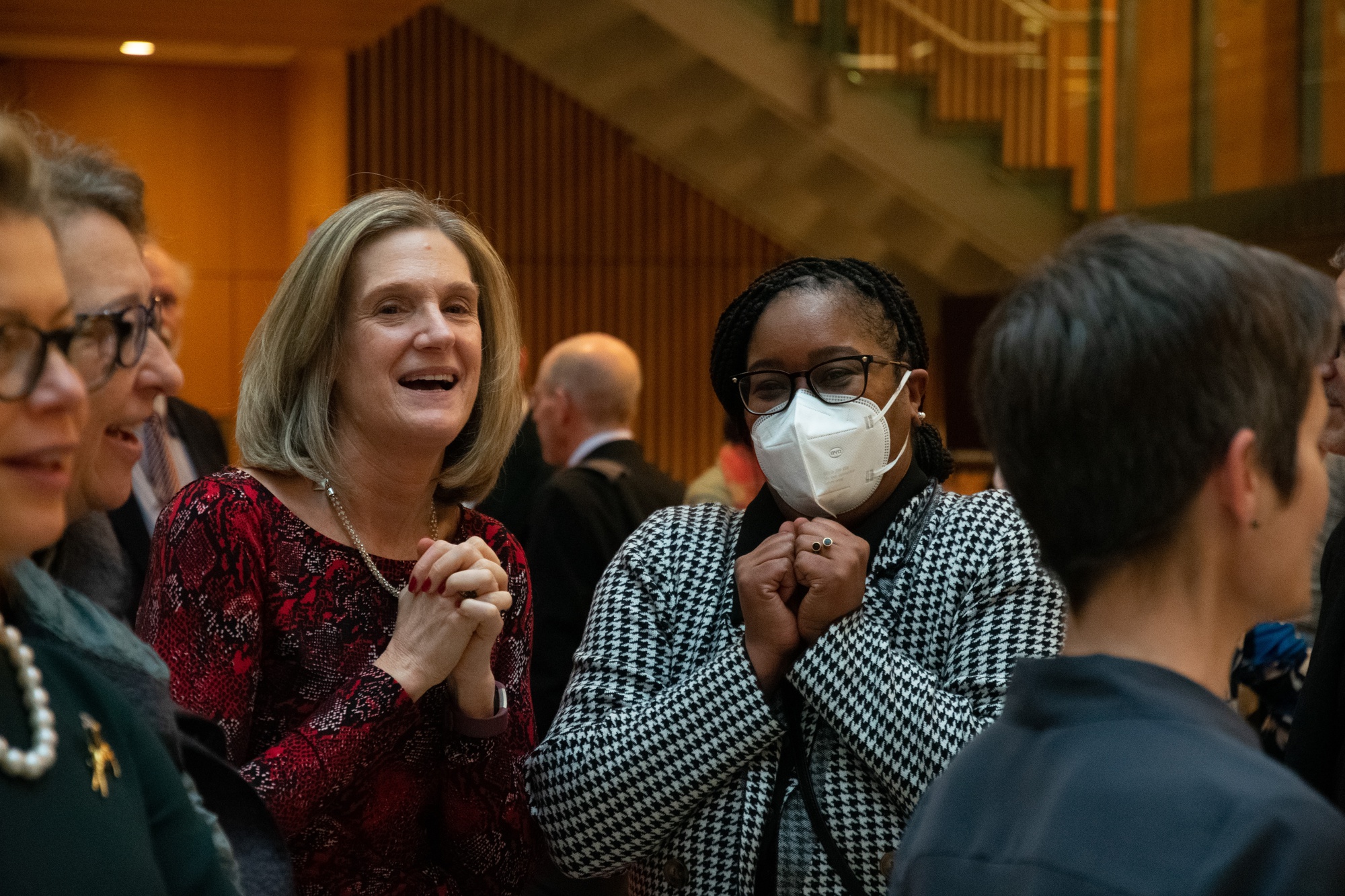 University Marshal Katherine O’Dair, left, and Harvard Museums of Science and Culture Executive Director Brenda Tindal looked on in excitement during the event. 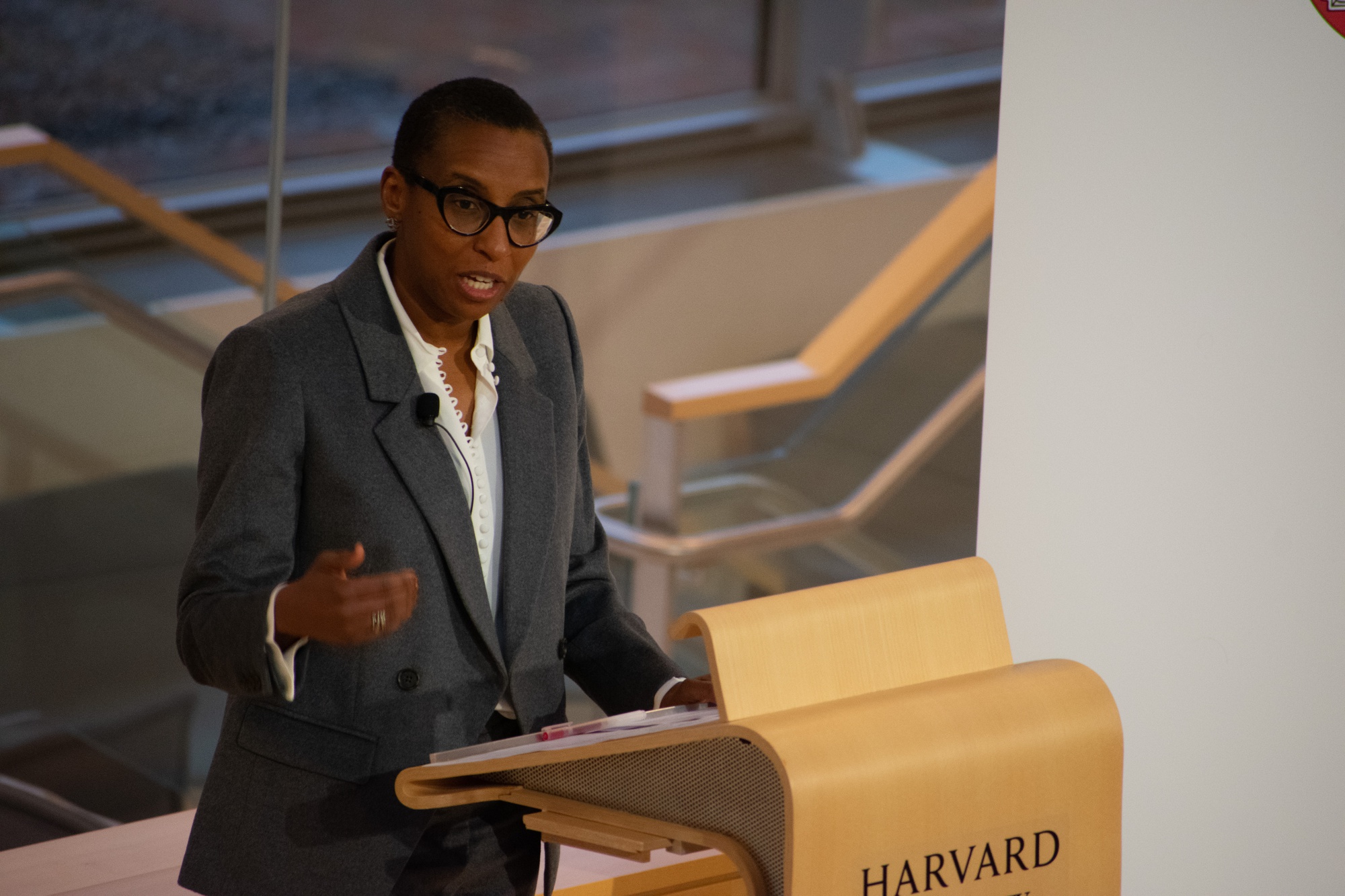 Gay addressed the crowd briefly before answering questions from the press. 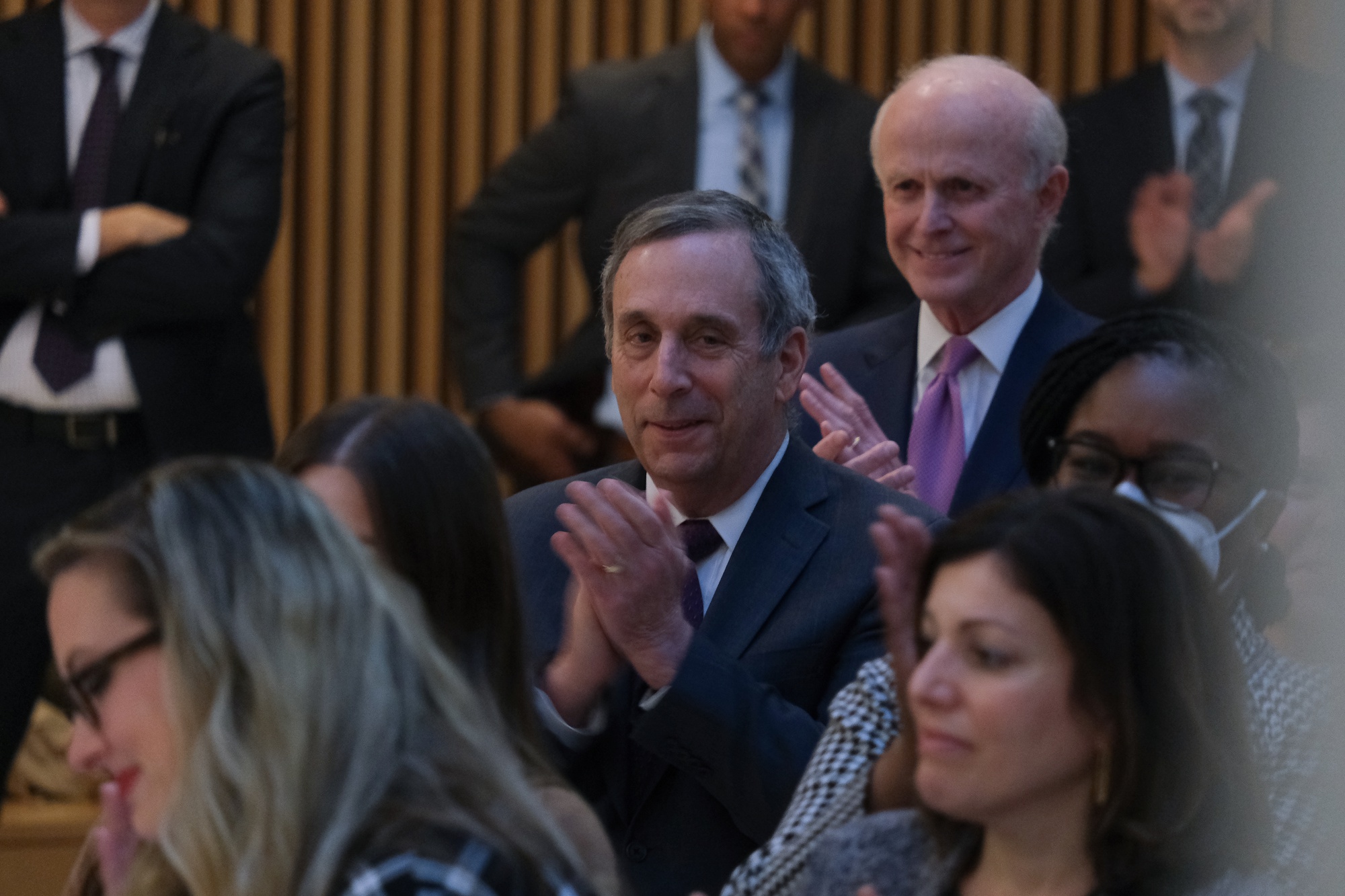 Bacow has served as President since October 2018. He led the University through the Covid-19 pandemic and the political turmoil of the end of the Trump administration. 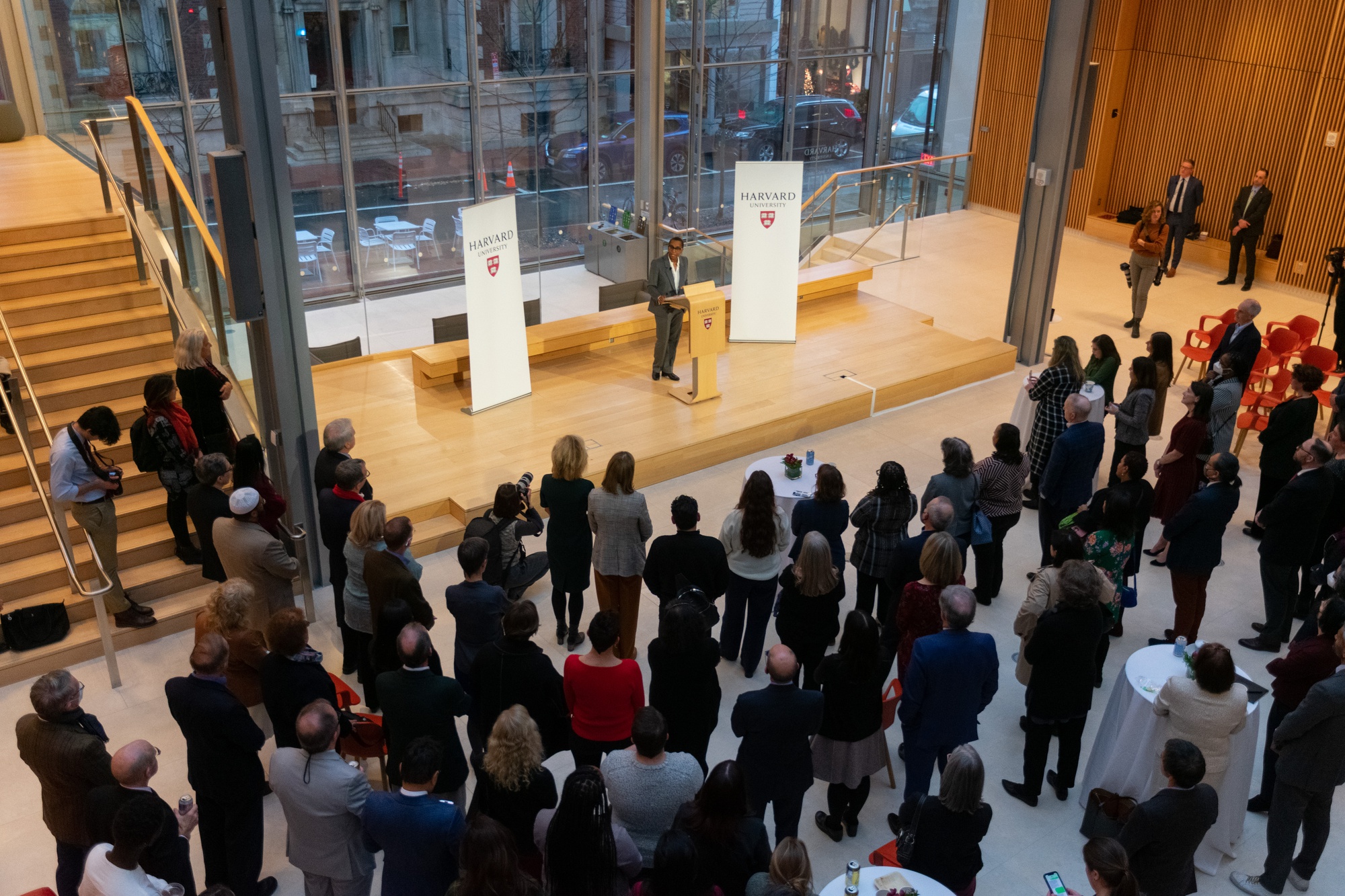 Gay will begin her term as president on July 1, 2023. Upon taking office, she will have to oversee the selection of four new deans across the University and handle the fallout of the Harvard admissions case, which appeared before the U.S. Supreme Court this fall.