The Crimson Arts Board presents its TV favorites of the year, from "Abbott Elementary" to "Heartstopper."
Adam Scott and Britt Lower in Apple TV+'s “Severance."By Courtesy of: Apple TV+
By The Crimson Arts Staff

By now, the residents of Hawkins, Indiana are no strangers to interdimensional terror — but the penultimate season of Netflix’s sci-fi horror drama manages to breathe new life into the series nonetheless. This year, “Stranger Things” returned from its three-year hiatus with a bang: Consisting of two “volumes” released five weeks apart, Season Four successfully recaptured audiences’ attention while expanding both the breadth and depth of its storytelling (and sending Kate Bush’s 1985 hit “Running Up That Hill,” to the top of the charts for the first time in nearly 40 years.) This time around, the show’s ensemble cast is scattered across the country and the world, catapulting what was once a small-town story into a darker, gorier epic of global proportions. Even still, the season grounds itself in a number of excellent performances and approaches grim themes with insight and sincerity: Concerned with the ghostliness of history, memory, guilt, and trauma, Season Four excavates Hawkins’ past and its characters’ psyches. The introduction of the series’ big bad, Vecna (Jamie Campbell Bower), is more than a long-awaited reveal — the very nature of Vecna’s antagonism lends itself to an examination of grief, mental health, love, and friendship. Unfortunately, some members of the show’s talented cast were left with little to do this season; nevertheless, Season Four remains an entertaining and affecting chapter in Hawkins’ story — and there is certainly much more to explore when the gang face their most dire threat yet in the show’s fifth and final season. —Jamila R. O’Hara

The HBO drama that became a cultural phenomenon in 2019 returned this year, and it did not disappoint. “Euphoria” retained its focus on deep dives into individual characters — one of the features that made its first season so memorable — with clarity and care. “Euphoria” Season Two continued the deep explorations of characters that made its first season so strong, this time turning to villain narratives. Now that the world and main cast have been fully established, Season Two saw characters ruining their relationships, making bad choices, and hitting rock bottom. Once again Zendaya’s work as Rue stunned, but everyone in the main cast pulled their weight, from Hunter Schafer and Colman Domingo to newcomer Dominic Fike. The performances are wonderful, and though the show once again delves into dark and distressing subject matter, for the most part it avoided glorifying their struggles. Though the show has work to do in some areas, its meta-exploration of the nature of memory and performance means that Season Two will not be remembered as a disappointment. —Millie Mae Healy 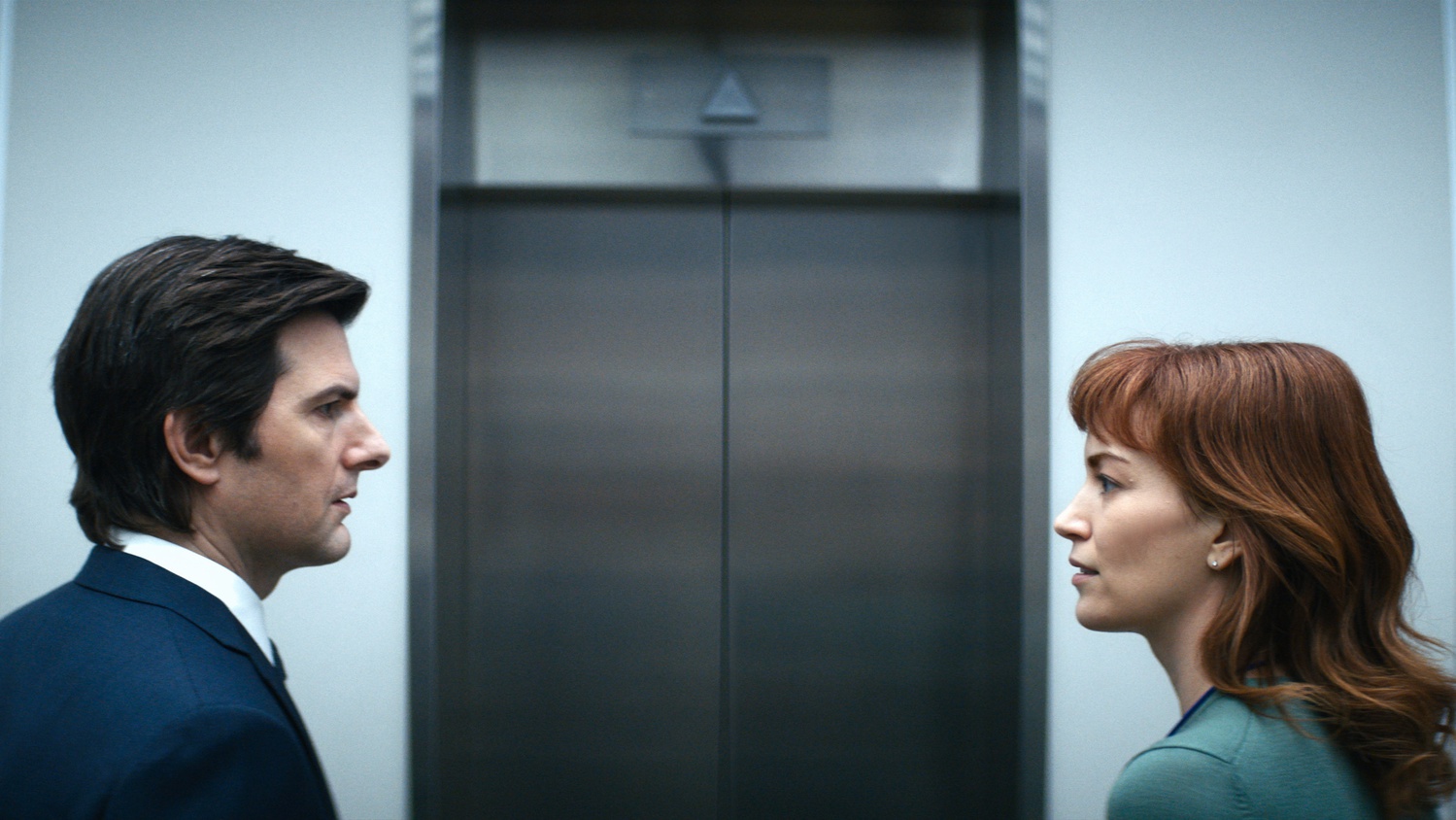 By Courtesy of: Apple TV+

It is a rare feat for a television show to reach near perfection in its first season, but that is exactly what Apple TV+’s buzzy new drama “Severance” accomplishes. Boasting one of the most talented casts on television, “Severance” grabs viewers’ attention from the very first episode and nevers loosens its grip, telling the dark and twisted story of employees at a mysterious technology company who agree to have their memories of their personal lives temporarily erased when they are at work and vice versa. Adam Scott stuns in his surprisingly dramatic role, but the real breakout star of Season One is Britt Lower, whose rebellious character Helly catalyzes much of the story’s intrigue. The show also benefits from a highly original visual composition, with the sterile interior of Lumon Industries somehow making green and white bone-chillingly creepy. Simultaneously disturbing, mind-bending, and humorous, “Severance” is like an episode of “Black Mirror” on steroids, and it’s impossible not to become addicted. Be prepared for goats, waffle parties, and the best cliffhanger of the year. —Brady M. Connolly

We reviewed the first season of "Severance" here.

At a time when the on-screen portrayal of teenagers is dominated by the gritty stories of “Euphoria” and “All American,” “Heartstopper” is a joyous breath of fresh air. Based on Alice Oseman’s graphic novel of the same name, the show follows the budding high school romance between Nick Nelson (Kit Connor) and Charlie Spring (Joe Locke). “Heartstopper” is a masterclass in wholesome storytelling. While Charlie and Nick deal with common tropes of bullying and exploration of sexual identity, the characters are surrounded by supportive families and stong friendships that have been absent from LGBTQ+ stories for far too long. With a diverse cast of supporting characters and just eight 30-minute episodes, “Heartstopper” is a delightful show to binge-watch that leaves viewers smiling from ear to ear. —Jen A. Hughes

In a media landscape overrun with reboots and remakes, revivals that feel truly justified are few and far between. “A League of Their Own,”' however, is a reboot that steps up to the plate. Amazon Prime Video’s sports comedy-drama is an adaptation of the 1992 film of the same name. Like its source material, the show provides a fictionalized account of the real-life All-American Girls Professional Baseball League (AAGPBL) during World War II; however, its new set of characters and plotlines make space for stories that were absent from the original film. The show boasts a roster of talented actresses and comedians who form a quirky (and endlessly charming) ensemble; leading the pack are Carson Shaw (Abbi Jacobson), a woman who leaves her small town to pursue her dream of playing professional baseball, and Maxine Chapman (Chanté Adams), a talented Black pitcher who is turned away from AAGPBL tryouts and subsequently struggles to be considered for any baseball team. Although the show takes some liberties with the aesthetics and linguistic trends of the time period, its overarching themes, such as the importance of community, are timeless. In addition to being a captivating sports drama and a successful comedy to boot (Kate Berlant is truly excellent as the Peaches’ most neurotic teammate, Shirley), “A League of their Own” is remarkable for its contributions to the representation of queer women — and LGBTQ+ people more generally — on television: Beyond introducing several groundbreaking individual characters, the space and weight that queerness is given onscreen allows the show to explore a broad spectrum of authentic experiences. Indeed, “A League of their Own” is uncommonly refreshing in the new spin it puts on its source material — and its important point of view hits home. —Jamila R. O’Hara

We reviewed the first season of “A League of Their Own” here. 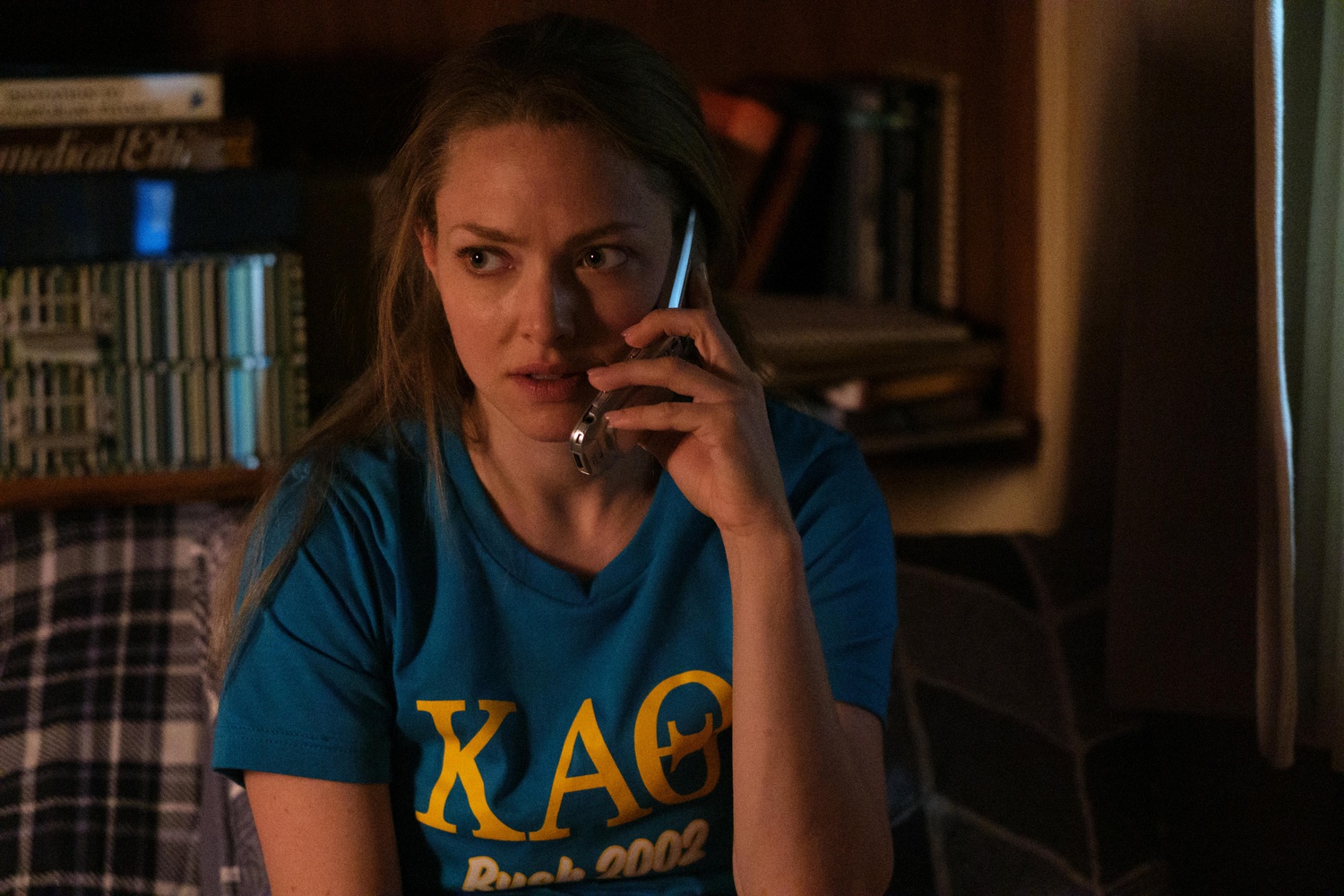 By Courtesy of Beth Dubber/Hulu

Hulu’s “The Dropout” is a gripping portrayal of desperation and narcissism. It follows the rise and fall of Elizabeth Holmes, who was recently sentenced to eleven years in prison for fraud, and how she went from a promising student at Stanford, to being named the “youngest self-made woman billionaire” in 2014, to revelations that her company, Theranos, was a lie. Amanda Seyfried's Emmy-winning performance as Holmes is brilliantly subtle, portraying Holmes through different stages of her life with ease. And unlike other celebrity or true crime dramatizations, “The Dropout” successfully humanizes Holmes and former COO of Theranos Ramesh “Sunny” Balwani (Naveen Andrews) without excusing the harm they perpetuated. The show’s subplots showcasing how people were truly harmed by Theranos, and the people who sacrificed to help reveal the truth (Camryn Mi-young Kim and Dylan Minnette’s performances are particularly memorable) result in a measured depiction of arrogance, entitlement, and reckless endangerment in Silicon Valley start-ups. —Millie Mae Healy

We reviewed "The Dropout" here. 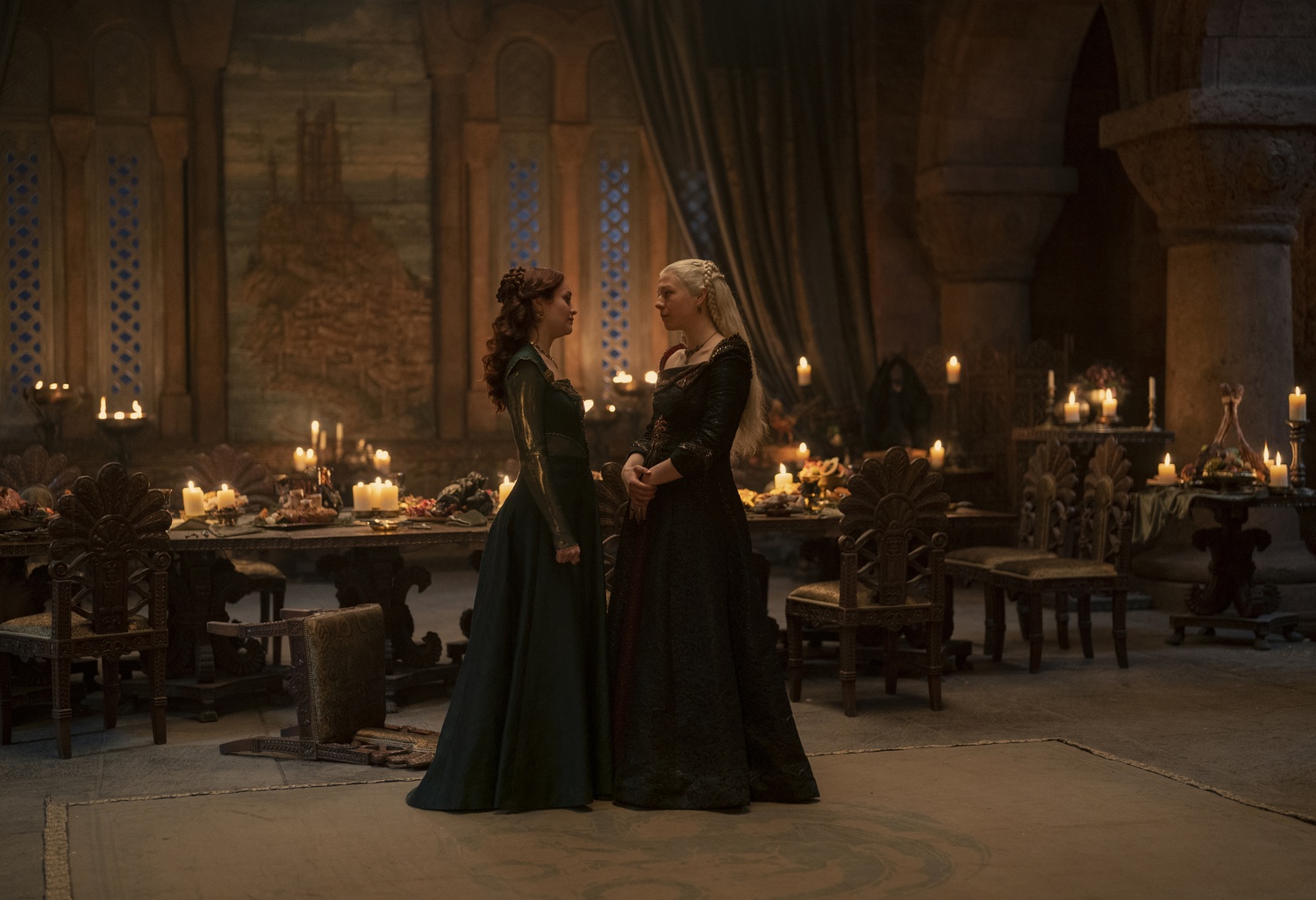 By Courtesy of Ollie Upton / HBO

After the controversial finale of “Game of Thrones,” there were good reasons to approach HBO’s announcement of a prequel with trepidation. But “House of the Dragon” was positively surprising. Set in Westeros 170 years before the action of “Game of Thrones,” the first season follows the events preceding the Dance of the Dragons, a war of succession between Rhaenyra, whom her father chose as heir, and her younger brother Aegon. Although a much slower burn than “Game of Thrones” — and so far offering little of the same suspense and urgency — “House of the Dragon” remains a fictional period drama par excellence. With meticulous precision — and under a thin veneer of fantasy — it builds a rich world, establishes the key players in the conflict to come, and zooms in on captivating palace intrigue. —Zachary J. Lech

We reviewed Season One of “House of the Dragon” here.

“The Bear” is one of the greatest shows ever streamed on Hulu. When Carmen “Carmy” Berzatto leaves the world of fine dining to run his family’s sandwich shop in Chicago, he must navigate a kitchen in desperate need of repair, outstanding debts, and a rowdy staff. Sublime portrayals of haunting grief, anxiety, and the pressures of running a restaurant accompany well-timed comedic moments and beautiful footage of food preparation. Phenomenal acting and cinematography culminate in a captivating series that, at only eight half-hour episodes, can (and should) be easily binged in a day. The first season of this comedy-drama series set high expectations for Season Two, which will be released at some point in 2023. —Nina M. Foster

Why go on a luxury vacation with your dysfunctional family when you can watch one from the comfort of your own home? This is the question at the heart of “The White Lotus,” Mike White’s HBO masterpiece that miraculously improved upon its already stellar form in Season Two. For the latest season, the cast travels to a boutique hotel in Sicily that will make viewers exceedingly jealous as they witness betrayal, hilarity, and heartbreak ensue all in the course of a one-week vacation. The greatest strength of the show lies in its flawless casting, and each actor turns in top-notch performances. Nevertheless, standouts can still be found in Aubrey Plaza, Michael Imperioli, and Meghann Fahy. And while the show introduces itself as a murder mystery, that plotline is secondary to the brilliantly biting satire and multi-layered explorations of modern society that lie at its center. A rare example of appointment viewing in the streaming era, “The White Lotus” wields the amazingly fun power to set social media ablaze with theories, memes, and analysis each and every week. Checking in to this show is no quick task, as viewers will be unable to deny themselves the pleasure of watching Jennifer Coolidge drive a moped or attend the opera, among many other wonderful things. —Brady M. Connolly 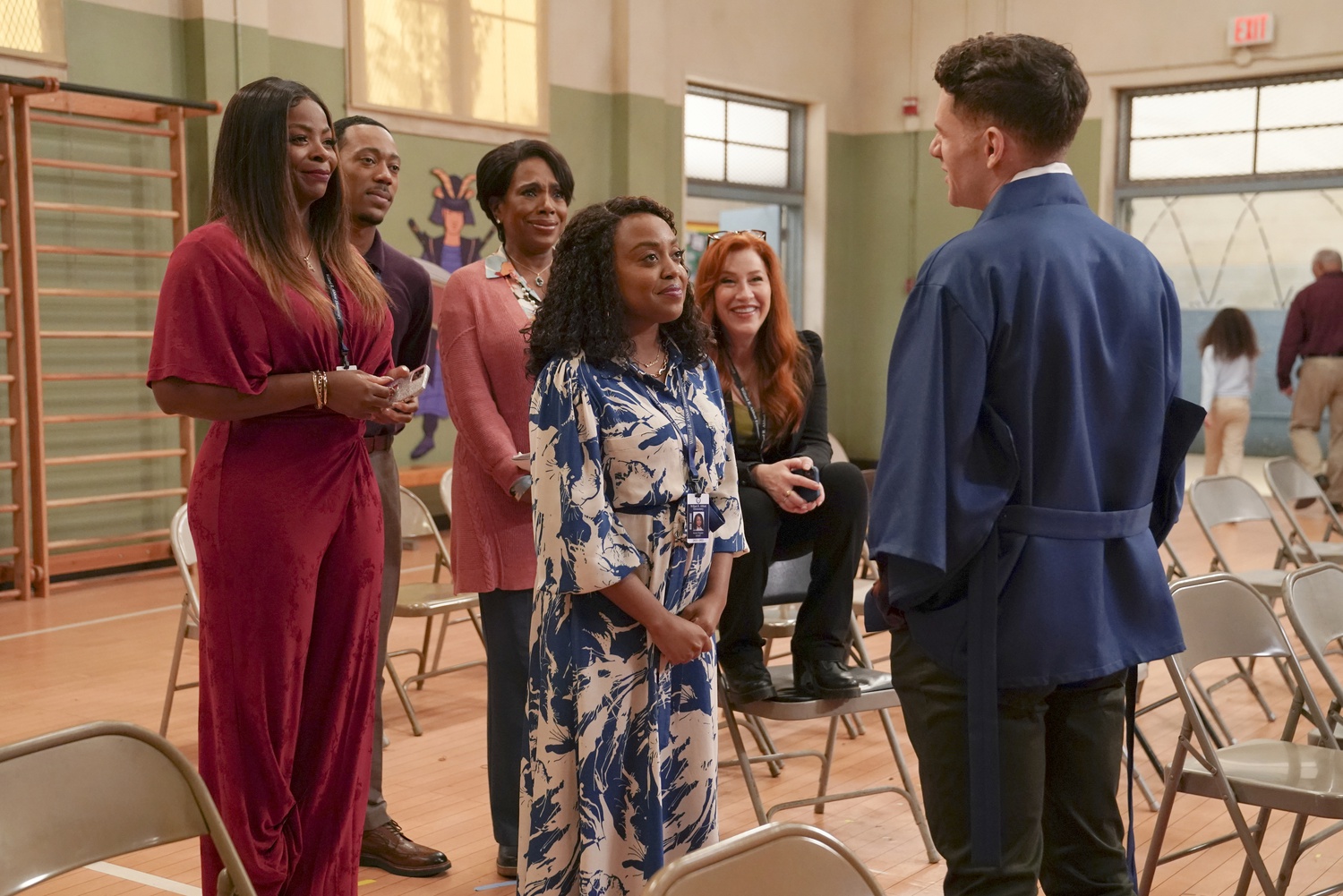 ABC’s comedy series “Abbott Elementary” is the latest mockumentary to take the world of television by storm. Creator, executive producer, writer, and star Quinta Brunson worked with director Randall Einhorn, known for his work on “The Office” and “Parks and Recreation,” to share the comical antics of fictitious teachers and their students at an underfunded elementary school. The series balances clever satire with a meaningful exploration of the relationship between public school teachers and their students. The mockumentary format helps the characters in the series feel real to viewers, making the crazy situations they run into all the more relatable. Many became familiar with Brunson’s work during her stint acting and producing for Buzzfeed Video, and her work on “Abbott Elementary” has proved that she is a force to be reckoned with. But don’t take our word for it: “Abbott Elementary”’s three Emmy awards for Outstanding Casting For A Comedy Series, Outstanding Supporting Actress In A Comedy Series, and Outstanding Writing For A Comedy Series in 2022 speak for themselves. —Chibuike K. Uwakwe

Read our review of the premiere of Season 2 of “Abbott Elementary” here.