In the midst of a hectic schedule — flying between Boston, Rwanda, and Haiti, teaching at the University, and meeting dignitaries — renowned Harvard physician Paul Farmer always made time for the people in his life, his colleagues and students say.
By Ariel H. Kim and Meimei Xu 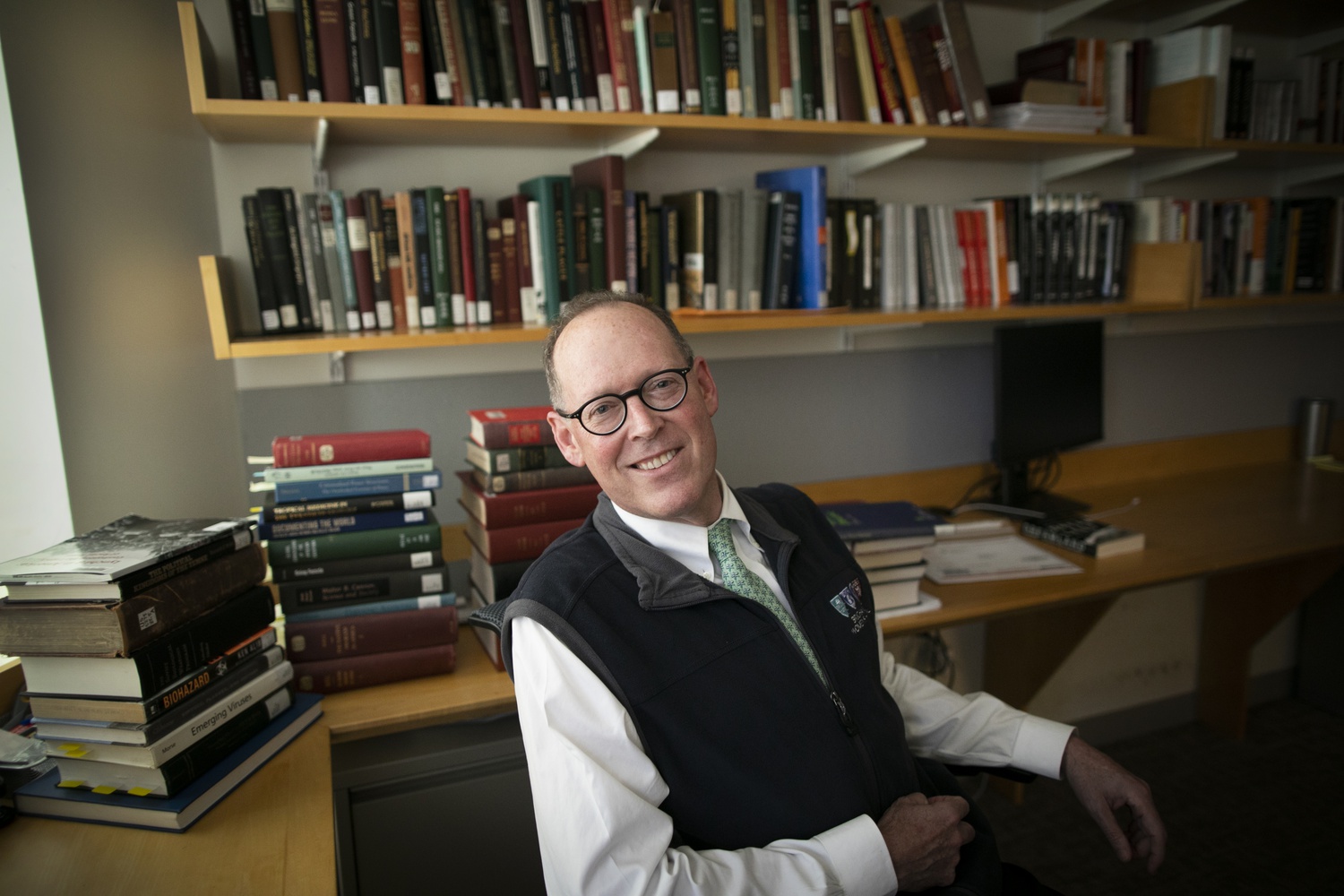 Paul Farmer, who dedicated his life to providing care to the poorest areas of the world, died Feb. 21 at the age of 62 from an acute cardiac event in his sleep, according to PIH. By Courtesy of Stephanie Mitchell/Harvard University

In the midst of a hectic schedule — flying between Boston, Rwanda, and Haiti, teaching at the University, and meeting dignitaries — renowned Harvard physician Paul Farmer always made time for the people in his life, his colleagues and students say.

When Darja Djordjevic ’08 reached out to Farmer to discuss working in Rwanda, his team told her to head to MIT where he was giving a talk.

“I got to sit with Paul nearby and listen while he did one of his canonical, traditional Paul Q and A’s, which he was famous for, which would last a few hours,” Djordjevic said. “Paul had this indefatigable passion for teaching and engaging with students.”

After the lecture wrapped up, Farmer invited Djordjevic, a freshman student at the Harvard Medical School, to his 50th birthday party. There, he introduced her to major supporters of his global nonprofit Partners in Health.

“Paul welcomed us and included us even when we were students and ... novices in these areas,” she said.

Farmer, who dedicated his life to providing care to the poorest areas of the world, died Feb. 21 at the age of 62 from an acute cardiac event in his sleep, according to PIH.

Though he can no longer carry out his work, HMS professor Anne E. Becker, who taught alongside Farmer, said his dedication to teaching inspired future generations to integrate social justice into their work.

“When we’ve all been thinking, ‘How will there ever be another Paul Farmer?’ he has sown the seeds of the future,” Becker said. “It won’t be Paul Farmer, but it’ll be another cadre of brilliant scholars.”

His Life and Work

Afterward, he traveled to Cange, Haiti, to work in public health clinics. There, he developed a lifelong interest in helping the world’s poor.

In 1987, he co-founded Partners in Health, a global nonprofit that builds public health infrastructure in impoverished regions.

After receiving medical and doctoral degrees from Harvard, he joined the University’s faculty and served as chair of the Department of Global Health and Social Medicine at HMS. He also served as chief of the Division of Global Health Equity at the Harvard-affiliated Brigham and Women’s Hospital.

In 2011, PIH opened Butaro Hospital in Rwanda and, four years later, established the University of Global Health Equity — a private institution for teaching, research, and care.

According to Farmer’s colleague Adia Benton, his unique insight into health care stemmed from his ability to recognize structural inequities.

“He was curious about the day-to-day existence of people, and he was keen, so astute about drawing connections between the every day and what some people call global forces,” Benton said.

Those who knew Farmer closely said he, most of all, was “deeply, deeply human,” according to April F. Opoliner.

Opoliner, a former teaching fellow for Farmer’s popular course now known as General Education 1093: “Who Lives, Who Dies, Who Cares? Reimagining Global Health” pointed to Farmer’s humility despite his accomplishments.

According to HMS lecturer Jason B. Silverstein, a member of the Gen Ed 1093 teaching staff, Farmer would ask his teaching fellows for a list of the names and school photos of the students in his course every semester. By the time the course started, Farmer had memorized every one.

“If you were a student in the class, I guarantee he knew exactly who you were, and he cared very deeply about it,” Silverstein said.

Scott S. Lee ’03, who worked with Farmer for his undergraduate thesis and graduate dissertation, said Farmer believed everyone deserves to be treated with love.

“He showered everyone with this deep love, and that is what I think was the most incredible about him,” Lee said.

According to Opoliner, remembering his human side empowers others to carry out his vision.

“My concern is that when we make him bigger than life, when we hold him up as something so remarkable, we can almost undermine his message, and that we then turn and sit there and say, ‘Well, we can never be Paul Farmer,’” she said.

When Lindsey M. “Marty” Zeve took over as a lecturer for Gen Ed 1093 in fall 2020, she offered to draft a note for Farmer for prospective students. Her draft of the note was mostly in first person: “I’m Paul Farmer, and I’m so happy to welcome you all.”

The note, when Farmer returned it to Zeve, was completely different. Farmer had eliminated every first-person pronoun to include the entire teaching staff in the note.

Lee said that instead of highlighting his own achievements, Farmer would celebrate the broader work of his colleagues and students.

“He would say he doesn’t deserve it — this kind of attention,” he said. “He would put the focus and attention on his patients, the people in Haiti and Rwanda and Sierra Leone and Lesotho and Peru and Russia.”

Lee added that Farmer’s main message was that “justice is simply love structured into society.”

“This idea that everyone is a human being, everyone deserves to be treated as such is a message that the world really needs right now,” he said.