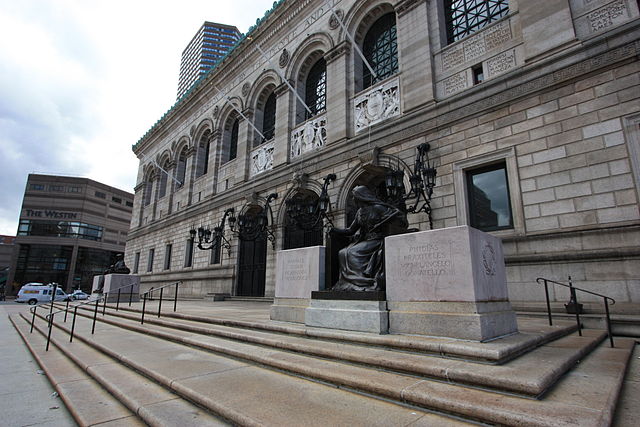 The Copley entrance to the Boston Public Library. By Courtesy of Cryptic C62 / Wikimedia Commons
By Caroline Gage, Contributing Writer

A new exhibition at the Boston Public Library’s Norman B. Leventhal Map & Education Center titled “More or Less in Common: Environment and Justice in the Human Landscape,” aims to explore the intersection between climate change and social justice, shifting the conversation about these two critical issues.

The exhibition, which is free to the public, opened on Friday, Mar. 18, at the Boston Public Library and runs through the end of the year. “More or Less in Common” approaches the vast issues of environmental and social justice locally, nationally, and globally. The show gives visitors the opportunity to visualize the climate crisis through historical and contemporary maps from the Leventhal Center’s collection, illuminating the inextricable relationship between environment and social inequality both in greater Boston and the world beyond.

President and Head Curator of the Leventhal Center Garrett Dash Nelson ‘09 expressed his hopes that the exhibition will change the way people think about the environment in a conversation with The Harvard Crimson.

“People still maintain in their minds this distinction between social issues and environmental issues, but there really is no way of maintaining that distinction when you really think hard about it,” Nelson said. “Where we choose to build schools, how people choose to get around to get their groceries, those are all both social justice and climate justice issues, and they deserve to be in the same conversation.”

The exhibition is part of the discussion and celebration of renowned landscape architect Frederick Law Olmsted’s 200th birthday. Olmsted, whose work shaped public spaces in Boston and other major cities, was an early figure of the environmental movement. “More or Less in Common” explores the role of these spaces and their intersection with modern social issues.

“We wanted to think about particularly the way that urban landscapes are designed and shaped and managed,” said Nelson. “That's a story that in some ways begins with attempts to change the shape of cities in the late 19th century, and runs all the way through contemporary climate change issues.”

“More or Less in Common” investigates the deep connection between social and environmental justice by delving into urban planning. A 1925 map from the Boston Parks Department showing underdeveloped areas and green spaces is superimposed with redlined neighborhoods, which were typically home to marginalized groups. These diverse working-class communities were often densely packed and separated from parks. The map is a reminder of the way the environment was and is used to enforce racism and social inequality.

“In almost any city in the United States, or even in the whole world, there's a really close correlation between where the rich and powerful communities are, and where the clean and healthy environments are,” Nelson said. “The people who are on the most exposed edges of climate change are also the ones who have been put on the exposed edges of society.”

The Leventhal Center created two of their own maps to add to the exhibition, synthesizing contemporary data into clear visuals. Their representation of vulnerable communities in the Greater Boston area is printed in large scale on the ground. This unique format and the eye-opening data it represents makes the map a particularly memorable and affecting aspect of the exhibition.

“This exhibition tries to take some of the massive amounts of data and analytic resources that are needed to understand a complicated question like climate change, and show how we might narrate that in a way that spurs political action,” Nelson said.

The exhibition concludes by showcasing projects from the Green New Deal Superstudio, an initiative which called for designers from around the country to create models of sustainable and inclusive landscapes and buildings. This ending is poignant — visitors are meant to leave with a sense of optimism, rather than hopelessness, in the face of these major issues.

“It’s not just this massive and impersonal climate system that’s inexorably changing,” Nelson expounded. “If people find new ways of organizing and articulating how a society and an economy ought to be run, then there are ways out.”

The examples of progress and challenges showcased in “More or Less in Common” highlight the vast community effort that will be necessary to face the climate crisis and social inequality. Importantly, the exhibition recognizes that institutions which guide much of the scientific discourse on the environment only make up a fraction of the population and economic system, and aims to change this.

“In order for that kind of discourse to really affect the way the world works, it needs to be something that everybody is talking about,” Nelson emphasized. “That's why I think work like exhibitions, and some of the work we're doing with digital exhibitions and trying to reach a broader public audience, is really crucial.”

The Leventhal Map & Education Center and its vast collection is open to all visitors for free at the Boston Public Library. “More or Less in Common: Environment and Justice in the Human Landscape” will be open until Dec. 28.