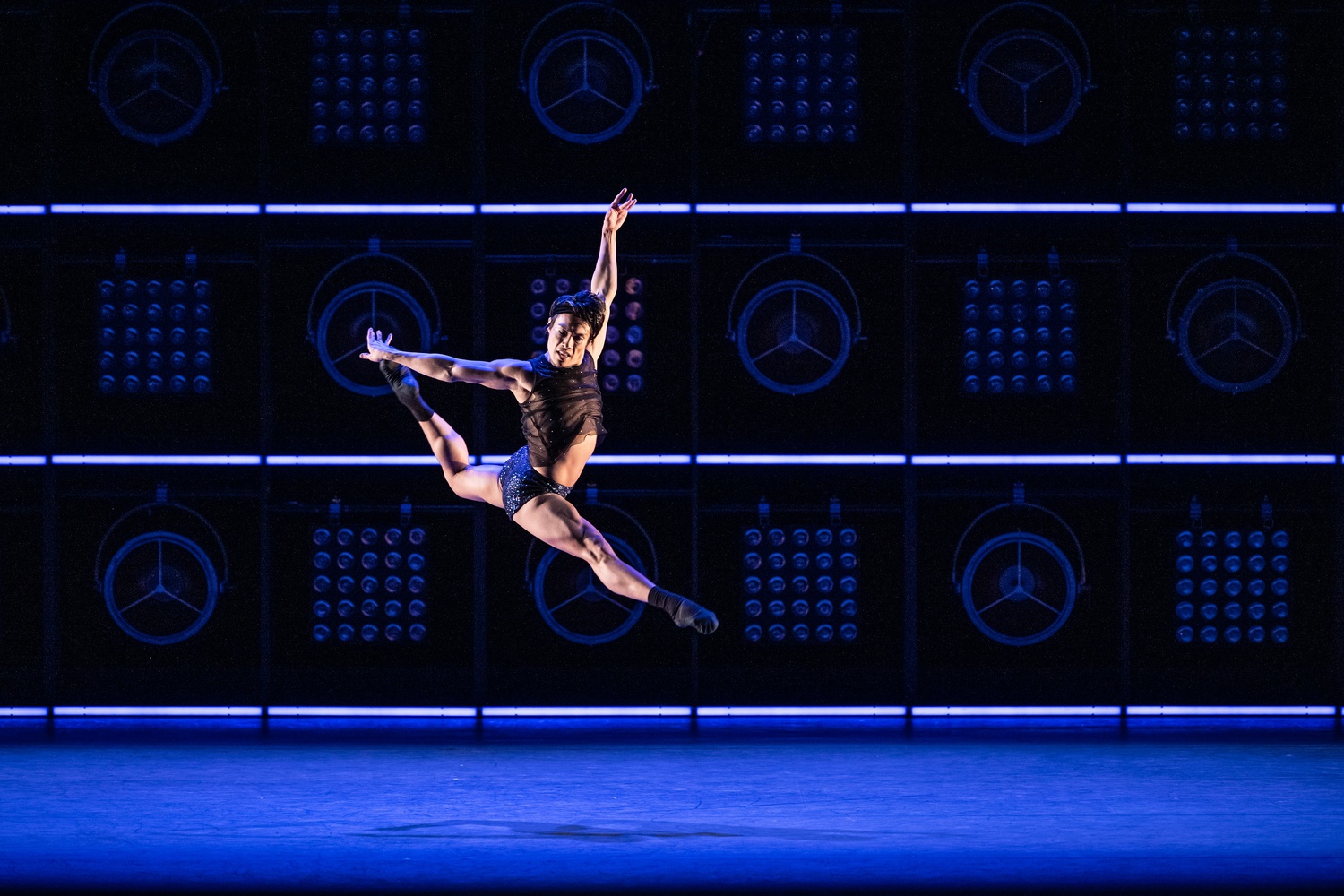 John Lam, who also teaches ballet classes at the Harvard Dance Center, was one of the principal dancers featured in the world premiere of Stephen Galloway's "DEVIL'S/eye." By Photo by Liza Voll, Courtesy of Boston Ballet
By Sofia Andrade, Crimson Staff Writer

What does it mean to dream? What kinds of spaces can open up when we allow ourselves to travel deep within our psyche? These were the questions that came to mind when watching a performance of Boston Ballet’s latest oeuvre, “DREAMstate.” The show, which ran at the Citizens Bank Opera House from March 17 through the 27, featured a triple bill of three stunning contemporary ballets: George Balanchine’s 1976 ballet “Chaconne,” Stephen Galloway’s world premiere DEVIL’S/eye, and Jiří Kylián’s 1996 “Bella Figura.” Each of the ballets were innovative in their own way, powerfully setting and subverting expectations while exploring themes of personhood, liminality, and the boundaries of consciousness.

Utilizing the more conventional stylings of “Chaconne” as the starting point for the night’s exploration of the self and its limits, “DREAMstate” establishes the genre of ballet as both something to lean into and something that can be expanded and reworked. Told through the unbelievable artistry and athleticism of its dancers, resplendent in their white costumes against a simple background, “Chaconne” is beautiful — that much cannot be disputed. But despite the innovative movement inherent to “The Father of American Ballet”’s choreography, the ballet can still be read as falling within the modern-day confines of the genre. That’s not to say the ballet isn’t compelling — it is, and the Boston Ballet company was stellar in its translation of the piece to the Citizen’s Opera House stage — but the night’s performances only became more interesting from there.

While “Chaconne” forged a new understanding of classical ballet, “DEVIL’s/eye” and “Bella Figura” both lean into something altogether different. Each pushes the relationship between dance, music, and aesthetics in the search for new limits.

With “DEVIL’s/eye,” choreographer, dancer, and costume designer Stephen Galloway creates an unforgettable ode to love, youth, and joyful exuberance. Set to a selection of music by The Rolling Stones — for whom Galloway worked as a choreographer and creative consultant — the world premiere ballet is superpowered from start to finish. It is as remarkable for its show-stopping aesthetics (the dancers, clad in sparkly and skin-baring ‘80s gym-inspired getups, danced in front of massive amp-like light fixtures) as it is for Galloway’s commitment to breaking the mold of classical ballet. Galloway’s dancers — led in part by Boston Ballet principal dancer and Harvard Dance Center’s own John Lam — embodied young lovers and freedom-seeking renegades alike, their movements unconstrained as they brought the timeless rock songs to life. It was pure and unbridled rock and roll. An achingly haunting pas de deux to “Wild Horses” with Lam and soloist Chisako Oga was a standout amid a universally strong ballet. 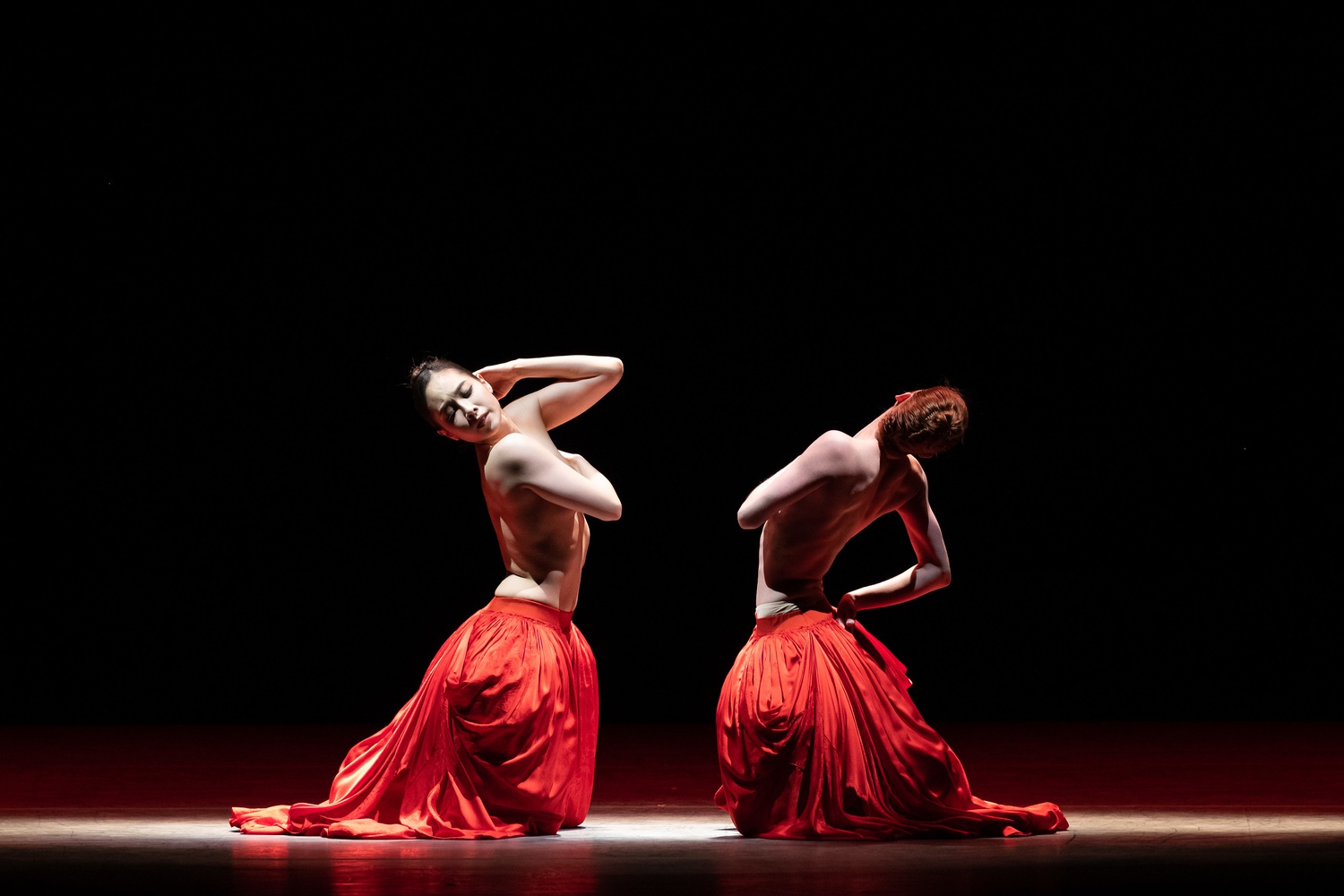 In closing out the show, Kylián’s “Bella Figura,” took “DREAMstate”’s ruminations on consciousness and the human experience to its natural conclusion. With its exploration of the body as a site of beauty, pain, and genesis, “Bella Figura” managed to escape from the physical and audiospacial limits of the opera house: A fire burned on either side of the stage, curtains became usable props, and semi-naked dancers floated in mid air while others continued dancing through periods of extended silence so that one could hear the dancers’ own footsteps on the marley floor. Each carefully calibrated movement fell heavy on an already rapt audience as dancers navigated the various scenes of rebirth that drive the ballet, their costumes red like blood and designed with the physical contours of the body in mind. The result was a captivating and moving exploration of what it means to be alive and in constant conversation with the self and other people. The choreography was most effective when, in true Kylián fashion, dancers were interacting with one another, compelled into movement by the touch of their partner at a given moment.

Critically, the exploration of human consciousness and the body (and its capacity for movement) in the three ballets is only strengthened in their juxtaposition to each other. Each seeks out to explore a different facet of human identity, and “DREAMstate” capitalizes on the resulting contrast. In forcing audiences to contend with the liminal spaces, those between the embodied joy of “DEVIL’S/eye” and the sober hauntings of “Bella Figura,” “DREAMstate” makes a strong case for the ambiguity of human consciousness, and the capacity for such a consciousness to be captured through art.