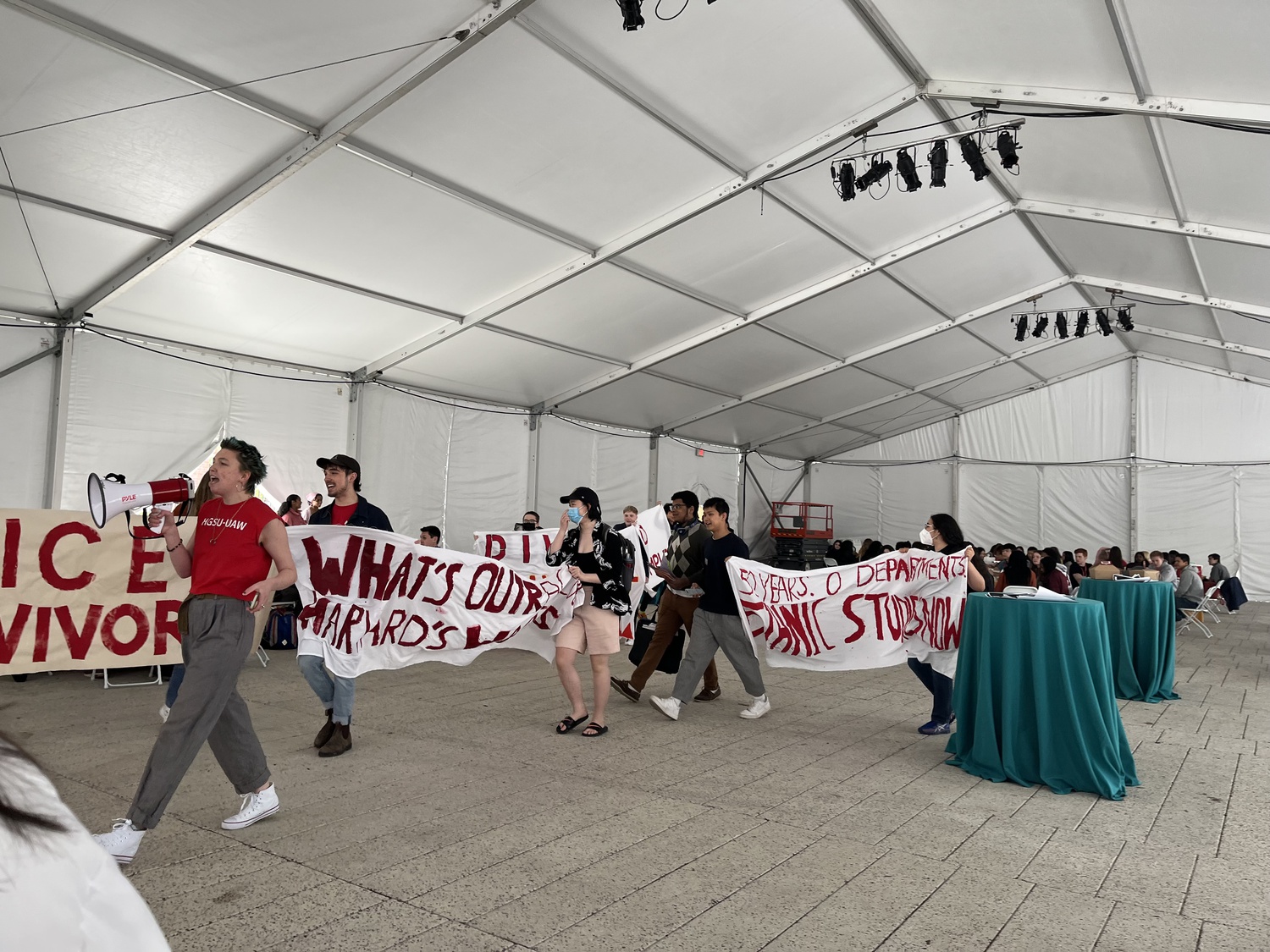 Organizers from nine campus activist groups joined forces and rallied “for justice” in Harvard Yard on Sunday, the first day of Visitas, chanting about hot-button campus issues from ethnic studies to prison divestment.

The protesters planned for the rally to occur during Visitas, when hundreds of prospective freshmen descend on campus for a taste of Harvard before committing. The coalition included groups like the Harvard Prison Divestment Campaign, Fossil Fuel Divest Harvard, and the Harvard College Palestine Solidarity Committee.

The activists gathered in Harvard’s Science Center Plaza, where admitted high schoolers were socializing, before marching through the Yard to the John Harvard Statue. The protesters then relocated to the Student Organizations Center at Hilles to disrupt the Visitas Activities Fair held for prospective students.

During the protest, organizers passed out flyers which read “Stand Up For Justice” and invited prospective freshmen to learn more about their groups.

Syd D. Sanders ’24, who led the rally, said the groups planned the protest during Visitas because prospective students often learn only a “glamorous” depiction of Harvard during the weekend.

“We are here to show that there’s more to the story,” Sanders said. “We welcome these freshmen into our organizing community and our fight against the injustices of Harvard.”

Sanders, who is involved with the Student Labor Action Movement, said he is not worried that the protest could dissuade students from committing to Harvard.

“We would love them to come, we want them to get involved,” Sanders said.

During the protest, some organizers held a sign that read “50 Years. 0 Departments. Ethnic Studies Now,” referencing the decades-long movement calling for the formation of a degree-granting Ethnic Studies department at Harvard.

Earlier this month, the Faculty of Arts and Sciences welcomed Taeku Lee as the first professor in an ethnic studies cluster hire. FAS Dean Claudine Gay said in an interview this month that she hopes that with more ethnic studies faculty hirings, Harvard can eventually form an undergraduate ethnic studies concentration.

Thuan H. Tran ’24, an organizer for the Harvard Ethnic Studies Coalition, said the groups used the protest to “raise awareness” about social activism at Harvard, adding that the rally was well-received by prospective students.

“A bunch of [prospective] freshmen just joined in and came on our walk to the John Harvard Statue,” Tran said. “So there’s definitely at least a high-level awareness.”

Julia Dam, a prospective freshman who was in the Science Center Plaza during the protest, said it was “great” to see Harvard students rallying for their beliefs during Visitas.

“I don’t think it tainted my experience at Harvard at all,” Dam said. “If anything, I felt more compelled to be a part of the student body because they have such strong voices.”