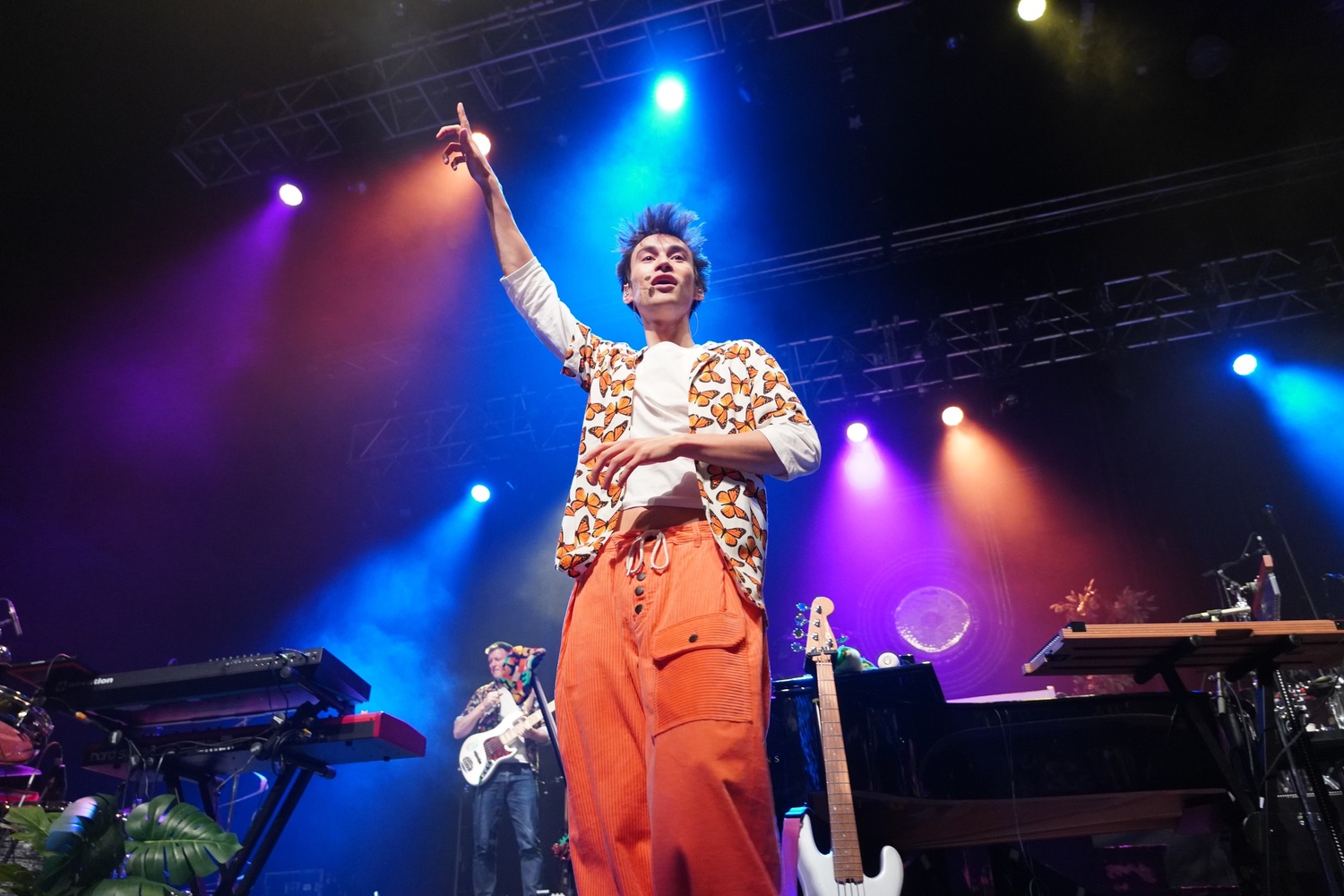 Singer-songwriter and multi-instrumentalist Jacob Collier addressed the crowd during his May 8 concert at Boston's House of Blues. By Courtesy of Jaden S. Thompson
By Jaden S. Thompson, Crimson Staff Writer

Around 8:20 pm on May 8 in Boston’s House of Blues, the crowd was getting antsy. “Jacob! Jacob! Jacob!” they chanted with anticipation. The stage was adorned with a variety of plants and a quaint park bench in the center. A rainbow of lights illuminated countless instruments. All that was missing from the set-up were musicians to play them.

At last, English singer-songwriter and multi-instrumentalist Jacob Collier came bounding on stage with the unbridled energy of a little boy. In bright orange parachute pants, a shirt decorated with monarch butterflies, and no shoes — only mismatched colorful socks — he leapt to the front of the stage ready to interact with his eager audience. He immediately engaged them in one of his signature call-and-response exercises, asking audience members to repeat his jazz riffs.

“My name is Jacob,” he told the crowd. “What’s yours?” He smiled as everyone yelled their names to him in response, countless voices echoing throughout the packed venue. Perhaps this simple exchange best encapsulates Collier’s approach to performing: His concerts are not just about showing off his wide-ranging talents, but about fostering meaningful engagement with his audience. For Collier, live music is a communal experience, and he encouraged his fans to perform alongside him, often stopping to conduct the audience like a choir director. 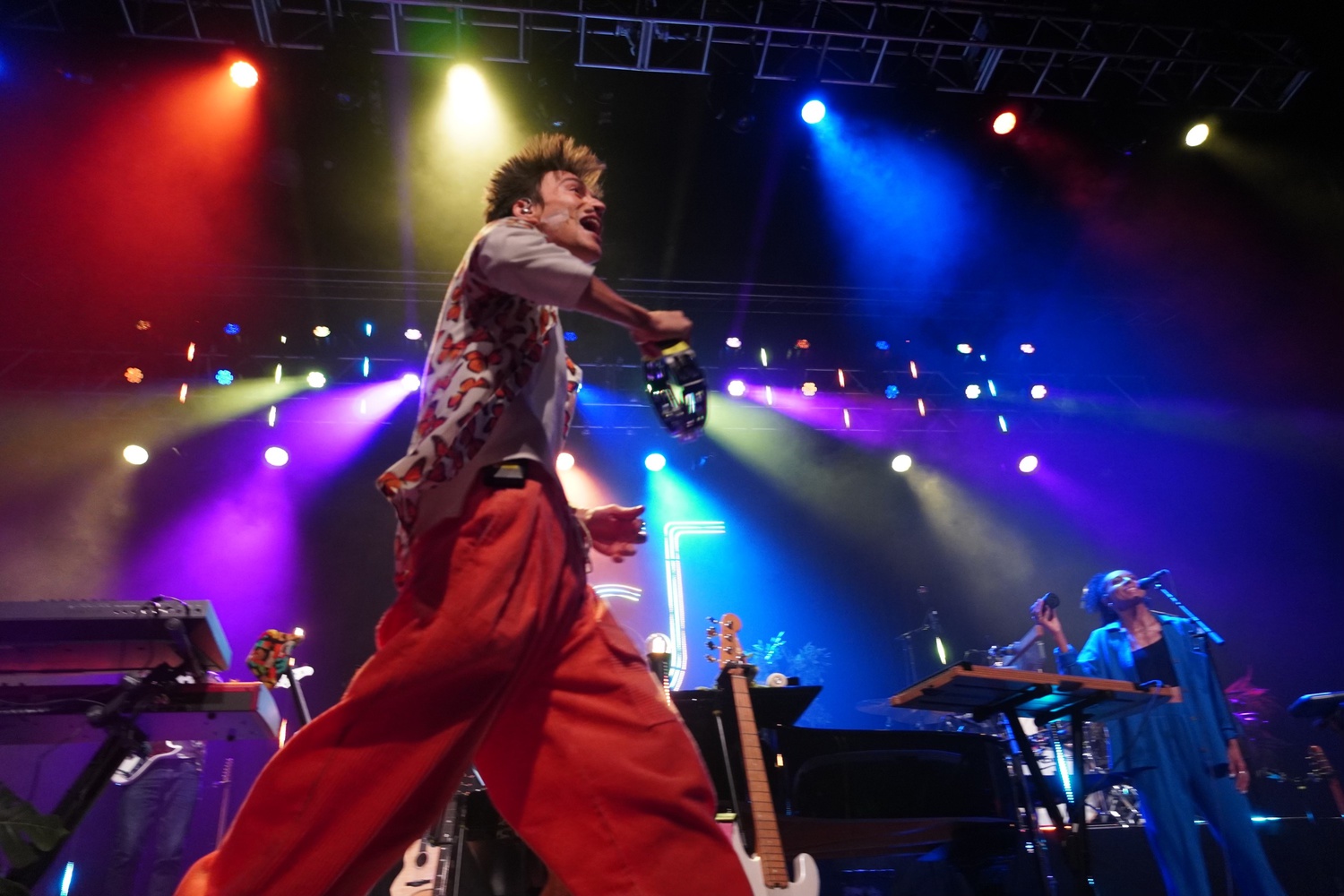 Jacob Collier ran across the stage playing tambourine during his May 8 concert in Boston. By Courtesy of Jaden S. Thompson

At just 28 years old, Collier has a diverse discography that refuses to fit into a single genre. “Djesse,” his ambitious four-album series, fuses jazz and classical in the first volume, transitions to acoustic and folk in the second, and leans into R&B and EDM influences in the third; the fourth album has yet to be released. At the Boston stop on his Djesse tour, he performed songs from across his released "Djesse" volumes as well as his 2016 debut album “In My Room.”

Collier and his band started things off with the upbeat R&B pop song “Count the People” from “Djesse Vol. 3.,” which quickly energized the crowd. With his band in lockstep, Collier slid around the stage in his sock feet, running between the drums and piano. Things slowed down as the band transitioned into the sensual R&B song “Feel,” which is lush with Collier’s signature layered harmonies and evocative lyrics — “Is there a place in the sky where the sky goes to sleep?” he sang.

Collier’s performance of his 2016 song “Hideaway” was an early standout in the concert — the crowd cheered as soon as he announced it. He sat down with his guitar, settling into the delicate rise and fall of the acoustic ballad which slowly gained power as it progressed. When Collier was most energized, he stood up from the piano bench and played the keys standing up, rocking back and forth to the beat and grinning all the while. “Hideaway” also showcased his vocals as he passionately sang in his upper range at the end of the song. 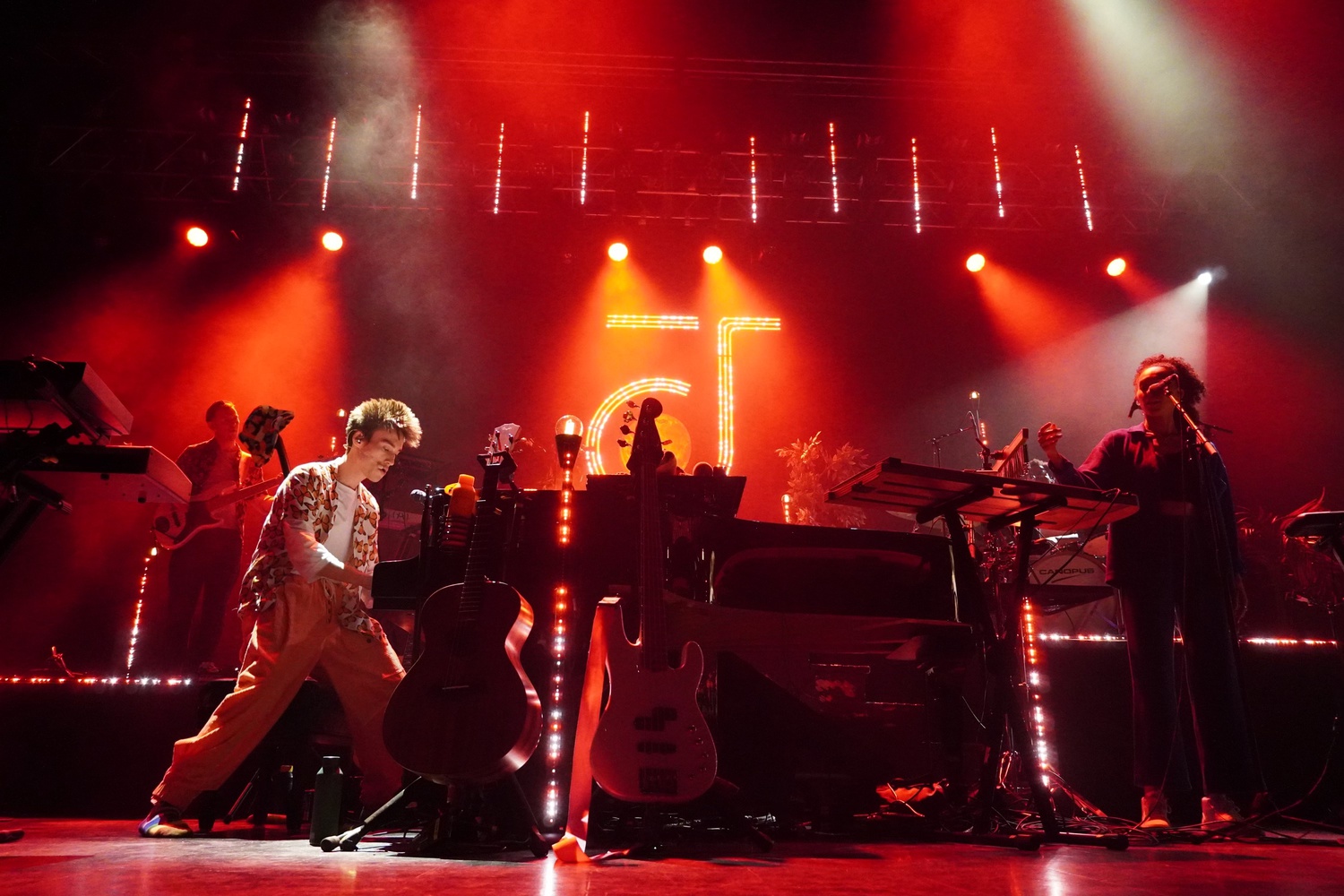 Among other instruments, Jacob Collier played piano during his concert. By Courtesy of Jaden S. Thompson

“Who would be willing to get just a little bit funky?” Collier asked the crowd before breaking out his electric bass to perform “Time Alone With You,” a “Djesse Vol. 3” song featuring Daniel Caesar; the audience readily swayed along to its syncopated groove.

Like Collier, his band and backup singers also never failed to impress. The duet “In Too Deep” featured backup singer Alita Moses taking on Kiara Lede’s half of the song, and her powerhouse vocals — which Collier described on stage as a mix of Ariana Grande and Ella Fitzgerald — lent the song a new dimension. Another duet captivated the audience when surprise guest Lizzy McAlpine, a rising singer-songwriter, came out on stage to sing “Erase Me,” her new song featuring Collier.

Collier ended the concert with “All I Need” and “Sleeping on my Dreams,” two of his most upbeat songs from “Djesse Vol. 4.” With more excitement than ever, the crowd jumped up and down and swayed their arms in the air back and forth to the beat. Even after Collier left the stage, the audience wasn’t ready for the night to be over: They chanted for an encore until Collier gamely returned to the stage. He and his band gathered cozily on the bench at the center of the stage to perform the folksy, happy-go-lucky song “It Don’t Matter.” Collier then followed this up with an inspired rendition of “Blackbird” by The Beatles, infused with beatboxing throughout.

Collier chose to end the concert not with his own song or even with his own voice. Instead, he divided the audience into several sections and led the crowd in a five minute-plus choral performance. When he wanted the audience to go up a note, he simply pointed his finger upward, and when he wanted them to go down the scale, he pointed down. With this simple conducting method, he orchestrated beautiful harmonies, audience members’ voices blending and layering and echoing in The House of Blues. With this ending, Collier fostered a truly unique experience that allowed his fans to feel like they were a part of something bigger than themselves — like the concert was about them as much as it was about him.