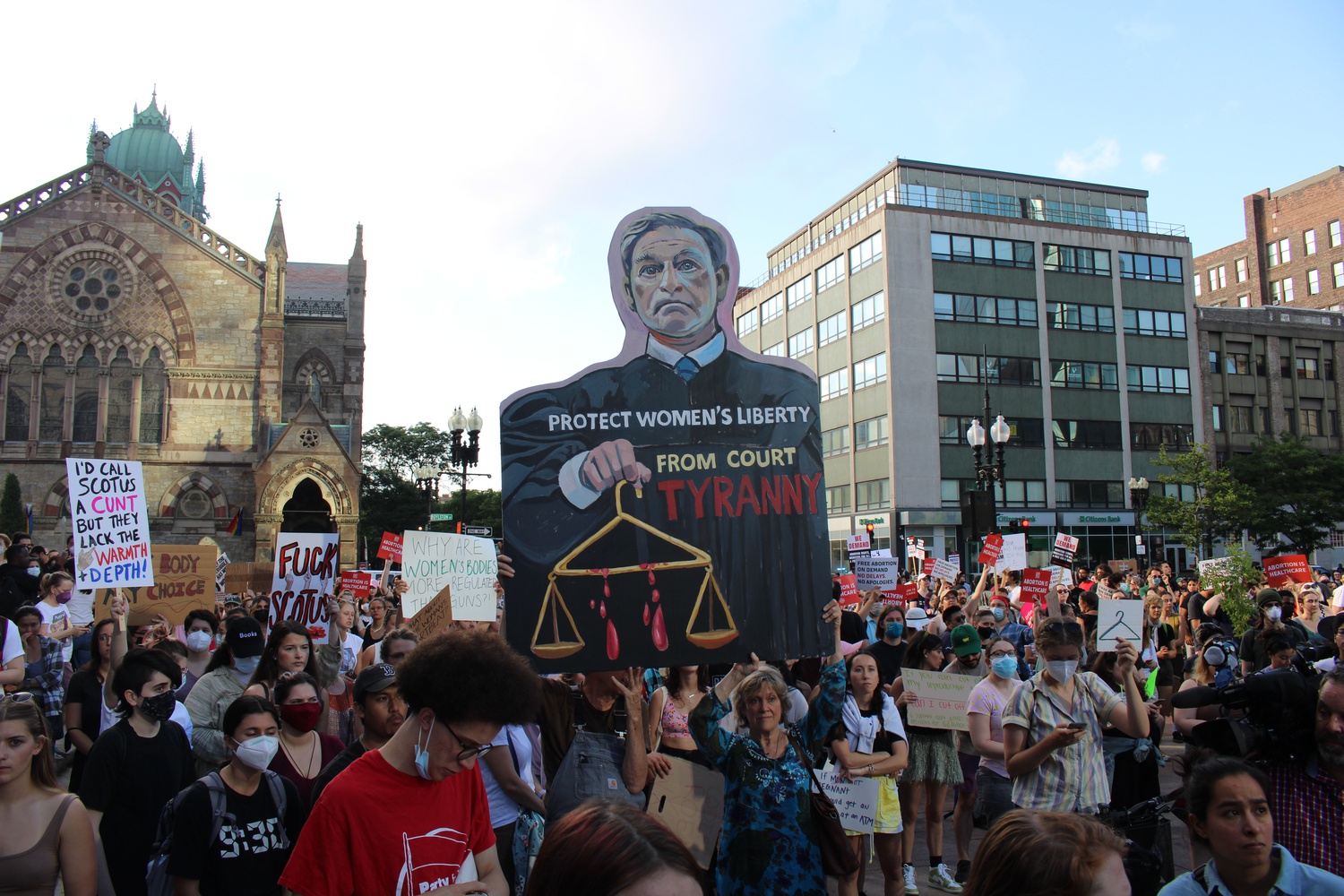 When Tessa I. Conrardy ’24 learned the U.S. Supreme Court overturned Roe v. Wade, she was not surprised — or even angry — but still drove from her home in Pittsburgh to the steps of the Supreme Court in Washington, where thousands gathered to protest the Court’s decision.

“After six years of political turmoil, and having my rights and the rights of my friends and loved ones questioned, I don’t have the capacity for anger anymore — even if I do have the capacity to get out and do the work that needs to be done to help fight,” Conrardy said.

The Supreme Court eliminated constitutional protections for abortion in a 5-4 opinion, overturning Roe v. Wade and bringing an end to nearly 50 years of legal precedent Friday.

In response, Harvard affiliates across the nation joined thousands who took to the streets to protest the decision, while some celebrated it. Most said they were not surprised, but still feared what it could mean for the future of civil liberties.

Ava K. Pallotta ’25, who attended a protest in New York, said her initial reaction to Friday’s decision was similar to how she felt after Politico published a leaked draft majority opinion in May showing the Supreme Court was set to overturn Roe v. Wade.

“My heart just sank knowing the decision was final,” Pallotta said. “It’s hard to advocate for doing things when so much is out of your control.”

“I want nothing more than to be the biggest advocate for forbearance and for respecting the Supreme Court and respecting these institutions that have been here for centuries before me,” Pallotta added. “But when it feels like the justices making those decisions are there because of political preferences, it’s just so hard to respect the legitimacy of this decision.” 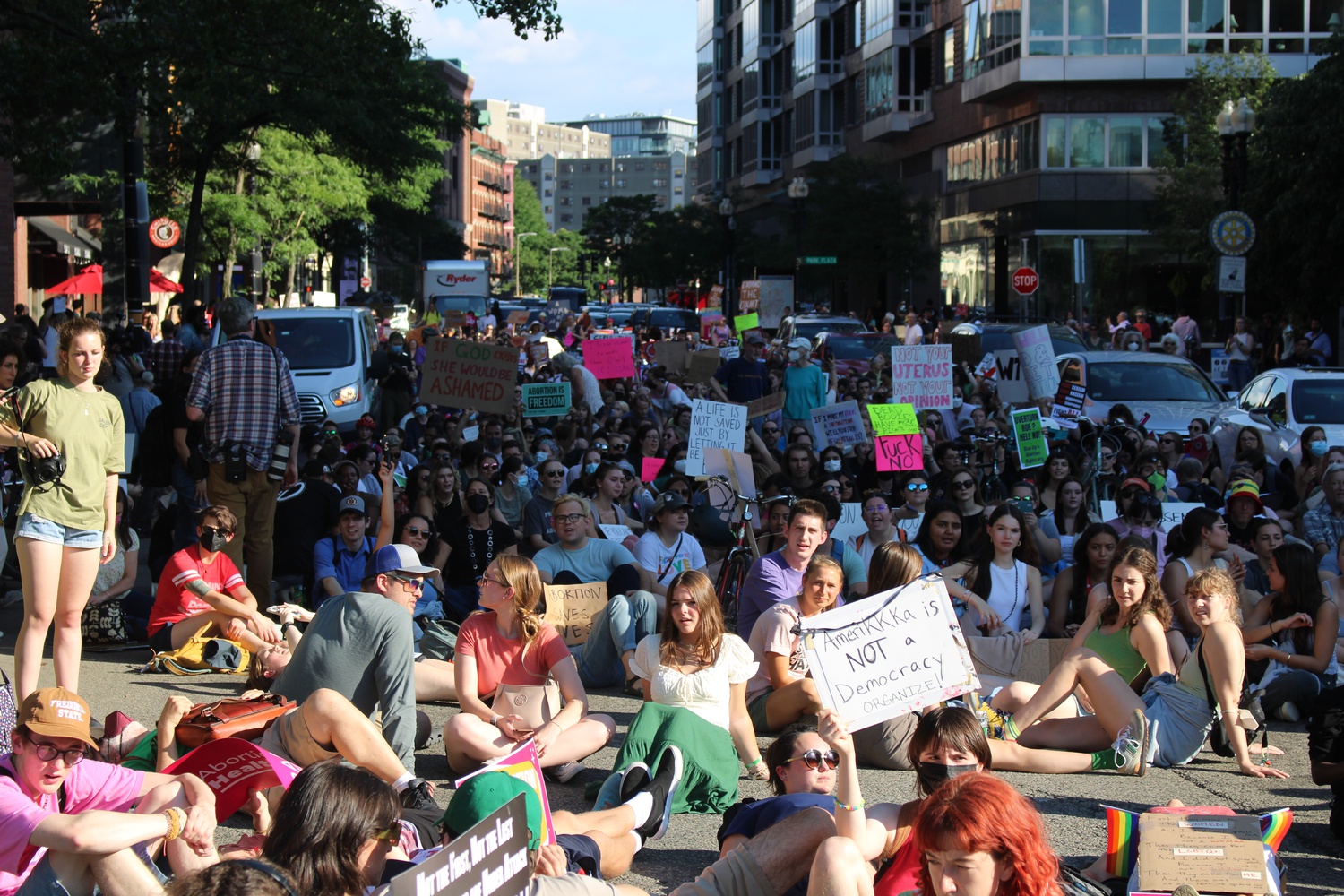 Some affiliates went further, criticizing the nine-justice Court itself as an undemocratic institution that often ignores popular demands.

Benjamin B. Roberts ’23, who attended a Boston protest of the Supreme Court ruling, said he was “angry, but not surprised” that the Court would rule against “the general feelings of the people.”

“[The] Supreme Court’s never been a particularly democratic institution, and it’s more obvious these days than usual, but it’s not a surprise,” he said.

Abhi S. Patel ’25, who interns at the U.S. House of Representatives, said he was giving a tour when he heard about the news and felt compelled to join the crowd afterward.

The justices, he added, have disproportionate power over individuals’ rights.

“This is where history is truly being made,” Patel said. “It’s not within the walls or the chambers of the House or the Senate, but in a court where it’s nine justices who we haven’t directly elected, turning over rights that have been established for nearly five decades now.”

David M. Hogg ’23, who attended a protest in Boston, said people should “not only vote every year, but get more people voting and get powerful people caring” about abortion rights.

Pallotta said she believes it’s important for people to vote in elections, but added that it is “hard” for her to hear “career politician[s] who had decades to codify Roe” put the onus on voters for defending the right to abortion.

“It should have been on the leaders — someone like Joe Biden — to codify this decision,” she added. 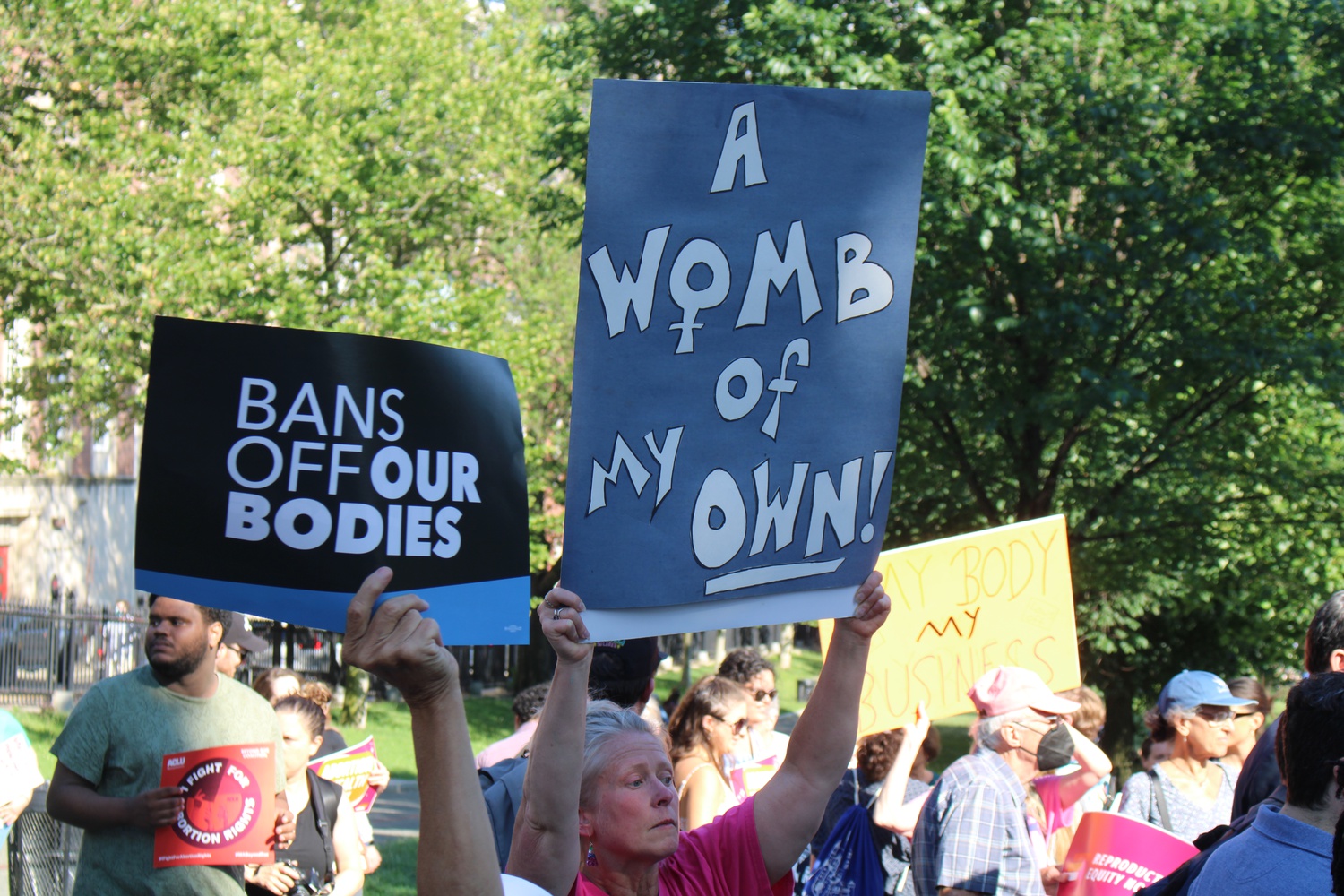 Demonstrators up a sign during a rally in Boston protesting the Court's ruling to overturn Roe v. Wade. By Miles J. Herszenhorn

Hogg also noted that voting the Democratic Party into power has not translated into nationwide legislation protecting abortion rights.

“They had a supermajority in 2009 and Democrats did absolutely nothing,” he added. “So it’s time for better Democrats.”

Hogg said Friday’s decision was the product of a long “chess game” that “institutions like Harvard have been at the center of,” referring to the power that the Federalist Society holds within the nation’s top legal circles.

Students at Harvard, the University of Chicago, and Yale University law schools founded the Federalist Society in 1982 for conservative and libertarian law students, legal professionals, and faculty. Six of the nine current Supreme Court justices are current or former members of the organization.

Hogg said pro-choice activists should fight against the influence of the Federalist Society, adding that his classmates should recognize the impact they can have, since Harvard students helped create the organization backing many Supreme Court justices.

“I think Harvard students have a responsibility with the power that we have to help build a better future for our country,” he said. 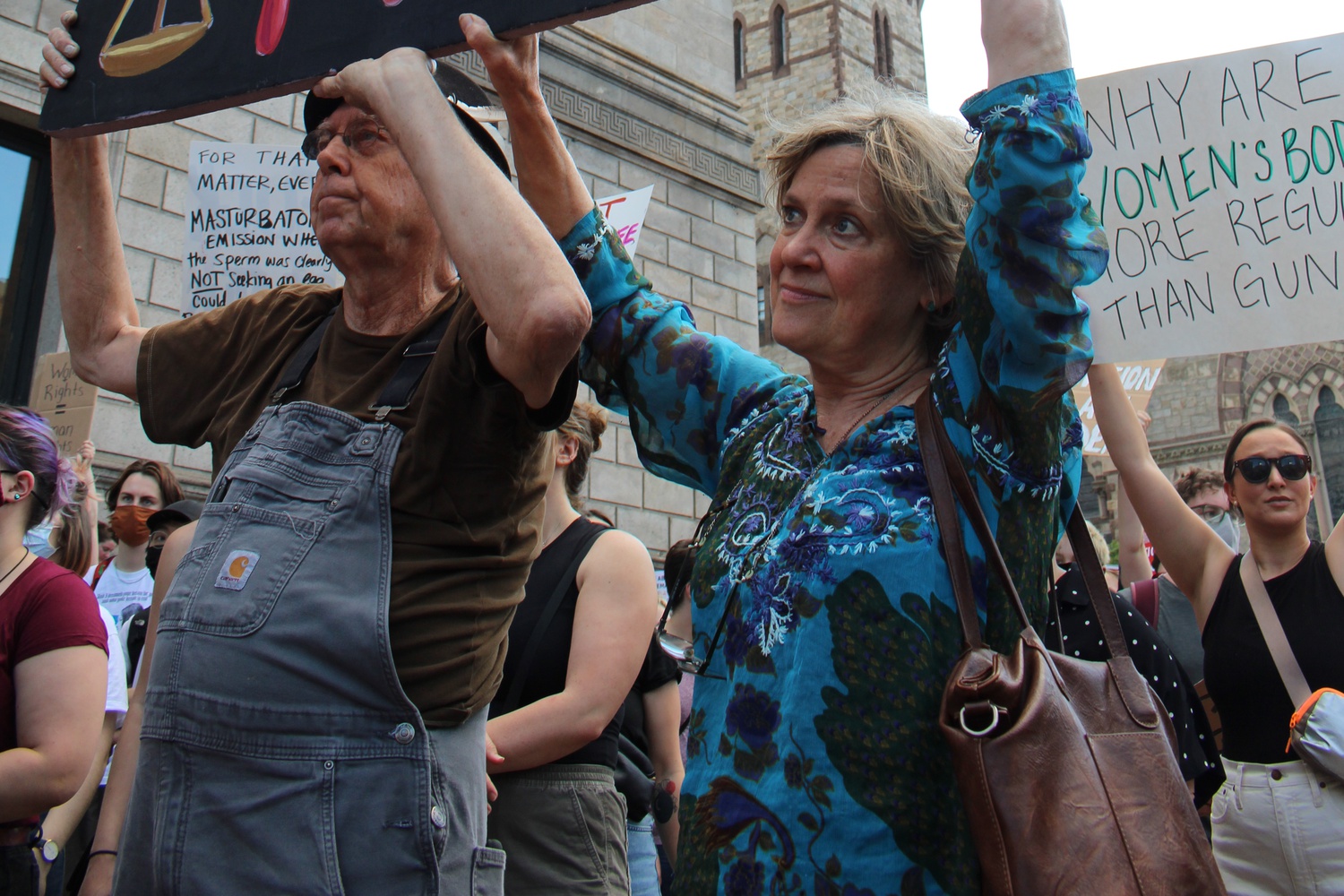 David J. Fichter ’73 said he painted the poster of Supreme Court Chief Justice John G. Roberts ’76, continuing a long tradition of painting his own protest signs, dating back to when he painted signs in his dorm at Lowell House to protest the Vietnam War. By Miles J. Herszenhorn

David J. Fichter ’73 attended a protest in downtown Boston with a poster that towered over the crowd depicting Supreme Court Chief Justice John G. Roberts ’76 with the words “Protect Women’s Liberty From Court Tyranny” written on his robe.

Fichter said it was important for him to protest the Supreme Court’s decision because it eliminated “a fundamental right.”

Within hours of the ruling, abortion clinics in some states began shuttering their doors.

Ava A. Swanson ’24, a co-president of the student group Harvard Right to Life, celebrated the cancellation of abortion appointments in those states, where the Supreme Court ruling immediately triggered bans.

“There’s women that had abortions scheduled for today and those lives of those children were saved,” Swanson said. “So I think that was just very exciting.”

Brianna S. Keefe-Oates, a Ph.D. candidate in Social and Behavioral Sciences who joined a protest in Portland, Maine, said abortion bans have short-term and long-term impacts on health and exacerbate social inequities for people of color and low-income individuals.

“Knowing that, in that moment, all of a sudden, there were people who had appointments for their abortions today [who] would no longer be able to get them was absolutely devastating,” she said.