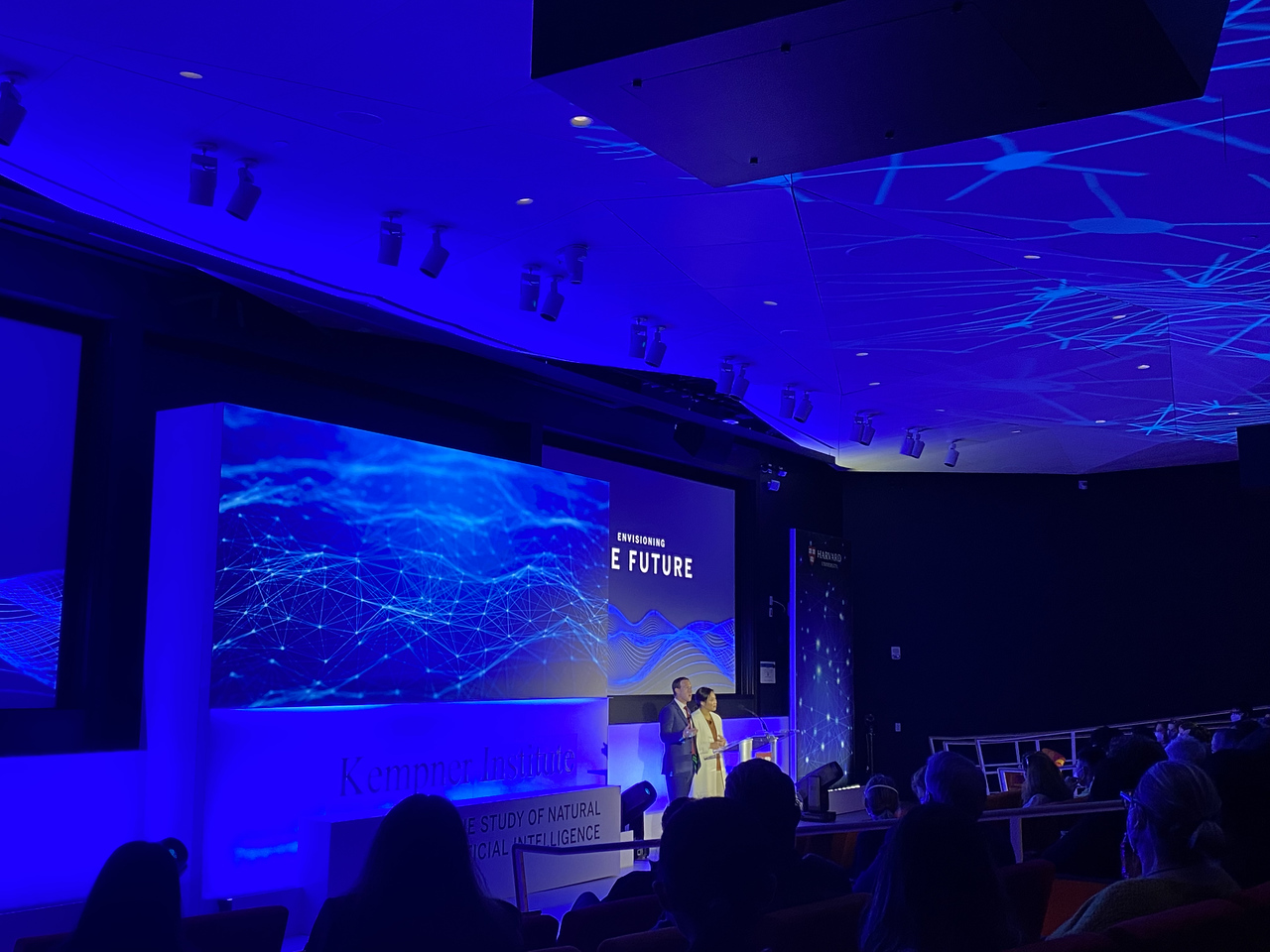 Mark E. Zuckerberg, left and Priscilla Chan ’07 speak at the launch of the Kempner Institute for the Study of Natural and Artificial Intelligence on Thursday. By Mayesha R. Soshi
By Mayesha R. Soshi, Crimson Staff Writer

Harvard celebrated the launch of the Kempner Institute for the Study of Natural and Artificial Intelligence on Thursday in an event featuring remarks from Meta CEO Mark E. Zuckerberg.

Announced in December 2021 by the Chan Zuckerberg Initiative, the Kempner Institute seeks to better understand the intersection between natural and artificial intelligence, two fields that are “intimately connected,” according to the institute’s website.

Zuckerberg and Priscilla Chan ’07 have pledged $500 million dollars toward the establishment of the institute over the next 15 years. The fund will support new faculty members, computing infrastructure, and resources for students to interact between different labs in the institute.

The namesake of the institute are Zuckerberg’s mother, Karen Kempner Zuckerberg, and grandparents, Sidney and Gertrude Kempner.

“My parents and grandparents focused on the power of the mind and intelligence to try to improve the world,” Zuckerberg said Thursday. “We thought that it was fitting that this institute will bear the Kempner name, because we hope that it will fuel discoveries about the mind and intelligence that will bring good to the world for generations to come.”

University President Lawrence S. Bacow lauded Zuckerberg and Chan for their knowledge of artificial intelligence and their philanthropic efforts toward education.

“Mark and Priscilla are quite unique because they are among the very, very few philanthropic donors in the world who actually have every bit as much subject matter expertise — if not more — than the people that they are going to be supporting here,” Bacow said. “They have given us this incredible opportunity for which we're enormously grateful.”

According to Chan, the institute will drive progress by following a three-pronged approach focusing on research, computation, and education. On the research front, Kempner will study the underlying principles of artificial intelligence and neurobiology and uncover new ideas and problems. The institute will also use advanced computing to generate and analyze data at a “truly massive scale,” Chan said.

“It will also put this technology directly into the hands of students,” she added. “They'll be the first generation in history to use machine learning tools so early in their careers.”

Both Zuckerberg and Chan emphasized the importance of placing students and young minds at the forefront of the Kempner Institute. Zuckerberg described students as “flexible thinkers” and “acutely aware” of the problems that need to be solved.

“Kempner was set up as a big bet on the students,” Zuckerberg said. “There's a lot of different ways to do this stuff in academia, but we believe students are really the ones who are going to solve the big problems here.”

The launch event also featured video remarks from several tech giants including Bill Gates ’77, former CEO of Google Eric Schmidt, and CEO of Amazon Andy Jassy ’90. Gates, Schmidt, and Jassey lauded Harvard for investing in the future of AI through the Kempner Institute.

“I am absolutely confident that in 10 to 20 years, this institute will have produced some of the greatest minds in AI,” said Schmidt.