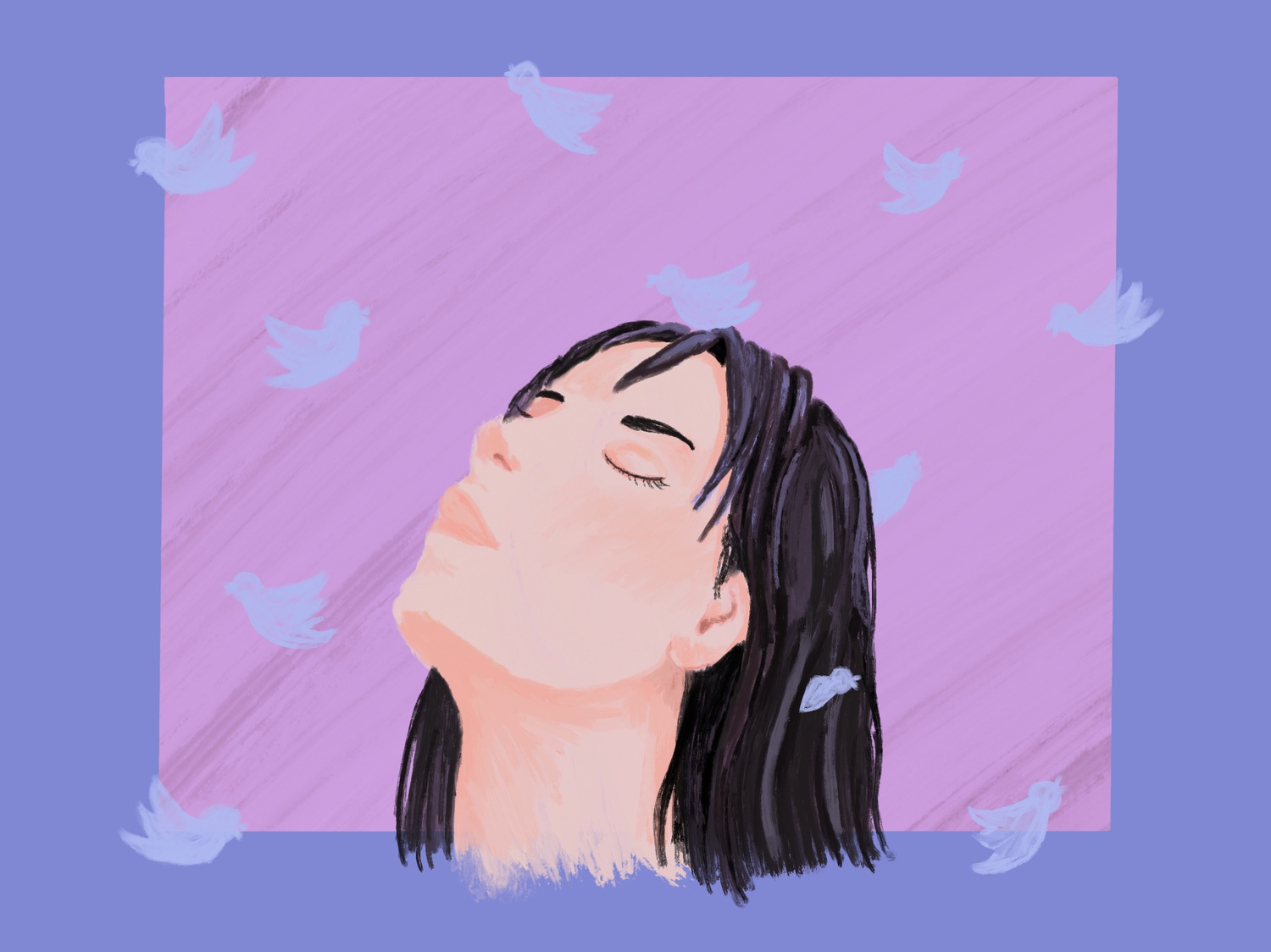 “Ultimately, I did not turn back to poetry because it was comforting or interesting. I turned back because it allowed me to say something essential about myself.” By Madison A. Shirazi
By Isabella B. Cho, Crimson Staff Writer

The year was 2012. I was ten years old, sitting in a Starbucks in an unremarkable suburb of northern Chicago. Snow piled in bluish mounds outside the window, and I etched a hasty star on the fogged glass. It was January. Half-frozen customers stumbled into the store and shook frost from their hair, grumbling for Pike Place Roast and a caramel macchiato with no whip, please.

For such a bleak scene, I was alarmingly invigorated. I was writing a poem on a Post-it. It was about dogs. Between sips of hot cocoa, I marveled at the words scrawled on that yellow square. I was thrilled about the poem. It was an exceedingly bad poem.

My foray into poetry began with intuitive things. Animals and seasons, flowers and roads. Things I could touch and observe. As years passed, I turned to poetry to probe the less obvious: my inherited history, the liminal space I occupied between cultures. Feelings of smallness and largeness, of compression and infinitude. Poetry became an entry point into explorations of gnarly and vital ideas — personhood, mortality, my complicated capacity for feeling.

At a certain point, it dawned on me that I might actually have a knack for the craft. In late middle school, I started submitting to local contests and, to my initial surprise, heard back. In the coming years, I was published in a smattering of literary magazines geared toward younger audiences. When I entered high school, I participated in national competitions. In the mail came certificates, occasionally medals. My senior year, my poems flew me to Miami for a week of fully financed masterclasses and, ultimately, earned me a ticket to the White House — a trip that never happened because of the pandemic, but that was an honor nonetheless.

It was surreal to be celebrated for something as personal as my words. And yet, despite its perks, sharing my writing through institutionalized avenues had its downsides. As the years progressed, the exhilarating abandon with which I had written poems became colored with tinges of apprehension.

With every accolade I won, the more I became attuned to — perhaps even obsessed with — the faceless reader on the other end. The critic. The consumer. The literary jury. Elements of my writing that had once come naturally became confused and performed. Even though I tried to fight it, I couldn’t shake the feeling that I was molding my writing to others’ praise. I had privileged my audience to the point of losing myself.

When I began my freshman year at Harvard, poetry naturally took a back seat. None of my classes were poetry workshops. Between extracurriculars, coursework, and a digital social life, carving out personal time to write became increasingly challenging, if not impossible. By the time summer came around, I realized I had moved farther and farther away from the genre. The distance allowed me to realize how unhealthy my younger writing years had, at least in certain moments, been.

It didn’t matter that my passion for poetry had faded. I could handle that. Eventually, though, my faith in the honesty of my own words faded, too — and that I could not accept. Shortly before my sophomore year of college, I resolved to quit creative writing.

My resolution coincided with a summer trip to Korea. Perhaps it was the abrupt shift in landscape or lifestyle, or the sheer boredom of the two-week mandatory quarantine upon arriving in Seoul, that led me to the spontaneous decision to join stan Twitter. It seemed like a way to put my intellectual anxieties behind me and revel in a space that was just for fun, no strings attached. Like other users, I crafted an anonymous account. I used my favorite anime character for a profile photo, and used an alias for my username. I followed random accounts that boasted eclectic interests ranging from wild mushroom picking to libertarian economics.

After the two-week quarantine, I was free. Korea’s superb public transportation allowed me to explore at least one city per day. On the subway, as the metropolitan landscape blurred metallic against the window, I would open the blue bird and scroll.

Under my alias, I fell in love with a complicated digital ecosystem. No one used their real names. The anonymity liberated us; we were bolder and more spontaneous, more creative and compassionate. In those two-hundred-eighty-character messages, I felt at liberty to externalize my most spontaneous and at times most vulnerable revelations. As I traversed Hong-dae and Itaewon, Gangnam and Dongdaemun, I was afforded oblique, enigmatic glimpses into the minds of strangers.

Every night in the maddening heat of August, minutes before I fell asleep, I would share a single image or thought with my followers. A white rose, blooming from the side of a mountain, that was so gorgeous it seemed like a biological glitch. The nostalgic romance of Korean convenience stores with their iconic aisles of snacks and toiletries and colorful non-perishables. The stars in the rural sky, yet to be marred by light pollution, resembling an arc of glowing rubble suspended in the dark. How small I felt looking up, yet also how sure, as though the ground beneath me were still for the first time.

Sending words into cyberspace was thrilling. The anonymity allowed for a radical suspension of judgement. For the first time in years, I had found a space that permitted me to think out loud. I began resisting the impulse to edit my thoughts in real-time and, gradually, reclaimed a part of myself. In the place I least expected, I was writing again. My tweets, strange as it sounds, read like fragments of poems. I realized, later, that they were poems in themselves.

If there’s anything I learned from that summer in Korea, it’s that I will always be writing poems. In retrospect, everything was a poem: The brackish breath I took gazing at the Hangang. My post-midnight trek across the technicolor alleys of Seoul. The melancholic awe I felt staring at the crashing ocean, blurred passersby murmuring softly as the sky turned pink. A poem, I came to understand, is a quiet shock of sight. A feeling of urgent wonder. That disquieting revelation that the world may still be good, after all.

Ultimately, I did not turn back to poetry because it was comforting or interesting. I turned back because it allowed me to say something essential about myself.

My stan Twitter account still exists. It will for a long time. Grim as it sounds, my account will likely outlive me. That thought once brought me to the brink of despair — now, I regard it neutrally, almost with tenderness. The account has hundreds more followers than my journalism account, a fact I find amusing to no end.

I was surprised and mildly disturbed to find that some of my followers initially thought I was in my mid-thirties. (Was it the semi-formal language?) Many of them correctly assumed I study the humanities. They know I have a twin (who, of course, has remained anonymous in our discourse.) They know my favorite shows and artists. They know I love Earl Grey and big cities and solitary walks in twilit suburbia. They know I listen to indie Korean music, have inchoate aspirations to study the law, and am flirting with the idea of spending two years of my twenties traveling the world.

Protected by our digital aliases, we spoke about fandoms and entertainment, about trivia and art. But if you read between the lines, it became clear that we were trying to talk about ourselves.

A few months ago, I thought about dissolving my account. As my cursor hovered over that red button, I thought of the people I had met. Yes, I only knew curated versions of who they were, but there were real people on the other end. The grace and warmth they had extended to me affirmed that. Among the people I connected with, a few remain vivid in my mind: A business major from Indonesia who spent her Sundays sprawled in the park near her apartment, flipping through ‘80’s Japanese comics. A Seattle-based litigator who hated the South of her childhood and was pooling money to visit Korea. A recent high school graduate from the Philippines who dreamed of becoming a nurse. A sports manga-obsessed 23-year-old from the Bay area who lit up every time I asked about his grassroots music label.

During those few months, I built a sparse digital constellation. Tiny apertures into my obsessions, my fears, the erratic largeness of my dreams. That is all these people will ever know. And that is exceedingly enough.

It has been half a year since I left Korea to begin my sophomore year of college; a decade has passed since that slow January in 2012. And yet, in an obscure corner of my mind, it is still snowing. I am still sitting in the middle of nowhere, Illinois, my hand hovering over a Post-it. I am ten years old, and the people around me shake frost from their hair. The yellow square rests against the lacquered mahogany table, and I am alone, immersed in my own unyielding faith in the words on that throwaway paper.

It is a bad poem and I am thrilled to have written it, to have pulled it irrevocably into the world. I hope I will always linger there, in my winter of bad poems. Because to step out of that season would be to end a good thing.