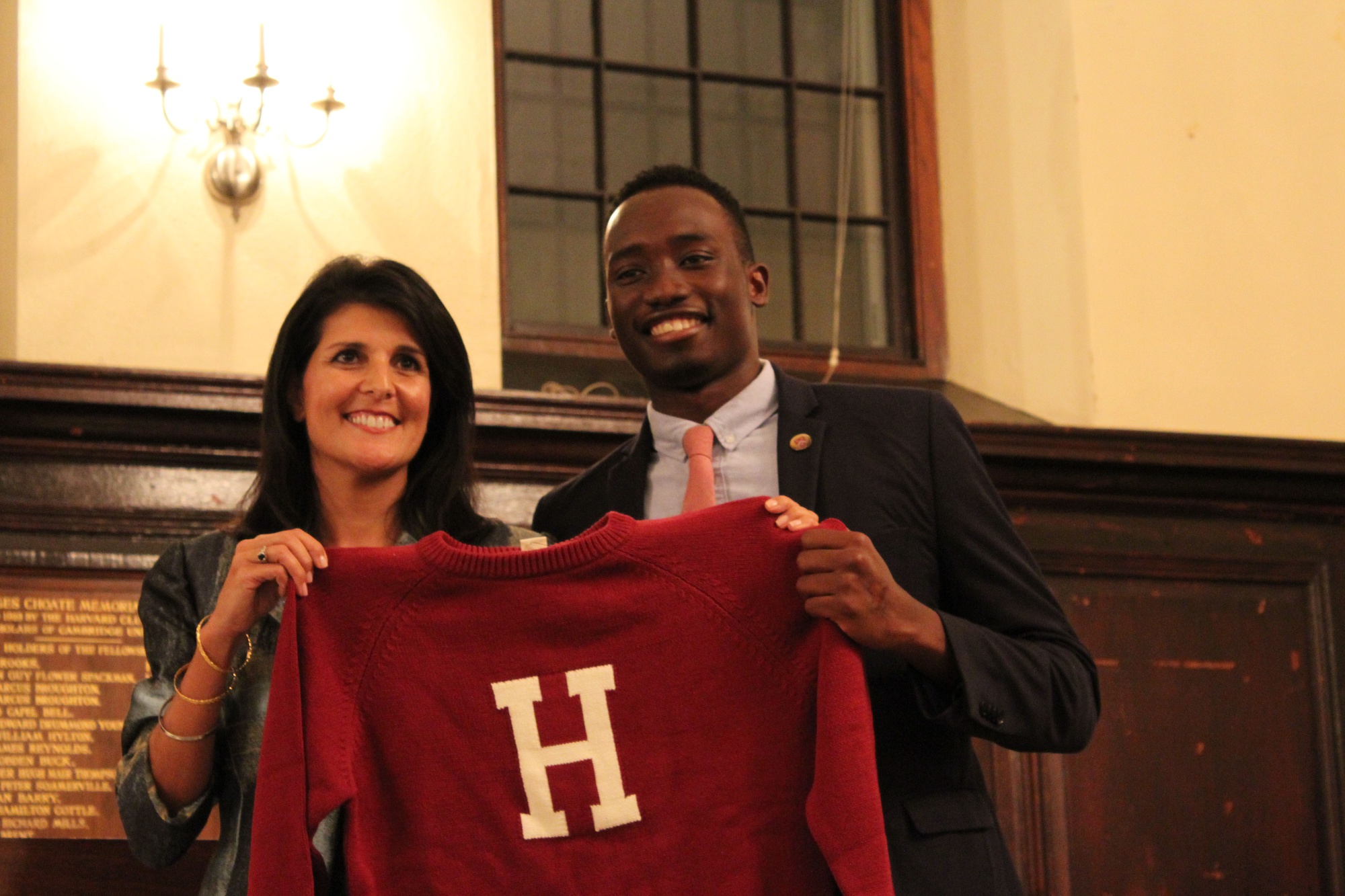 South Carolina Governor Nikki R. Haley is presented with a Harvard “letter sweater” by Harvard Foundation intern Nuha Saho ‘18 at the conclusion of the dinner event where she was invited to make remarks Thursday night. Haley spoke with pride about the idea of a “New South” that promoted racial and economic equality and defended the Republican Party from accusations of racism and intolerance.
By Elizabeth C. Keto, Crimson Staff Writer

Haley garnered national attention this summer for her call to remove the Confederate flag from South Carolina’s statehouse grounds following the shooting deaths of nine black members of the African Methodist Episcopal Church in Charleston, S.C., allegedly in a racially motivated attack by Dylann S. Roof. 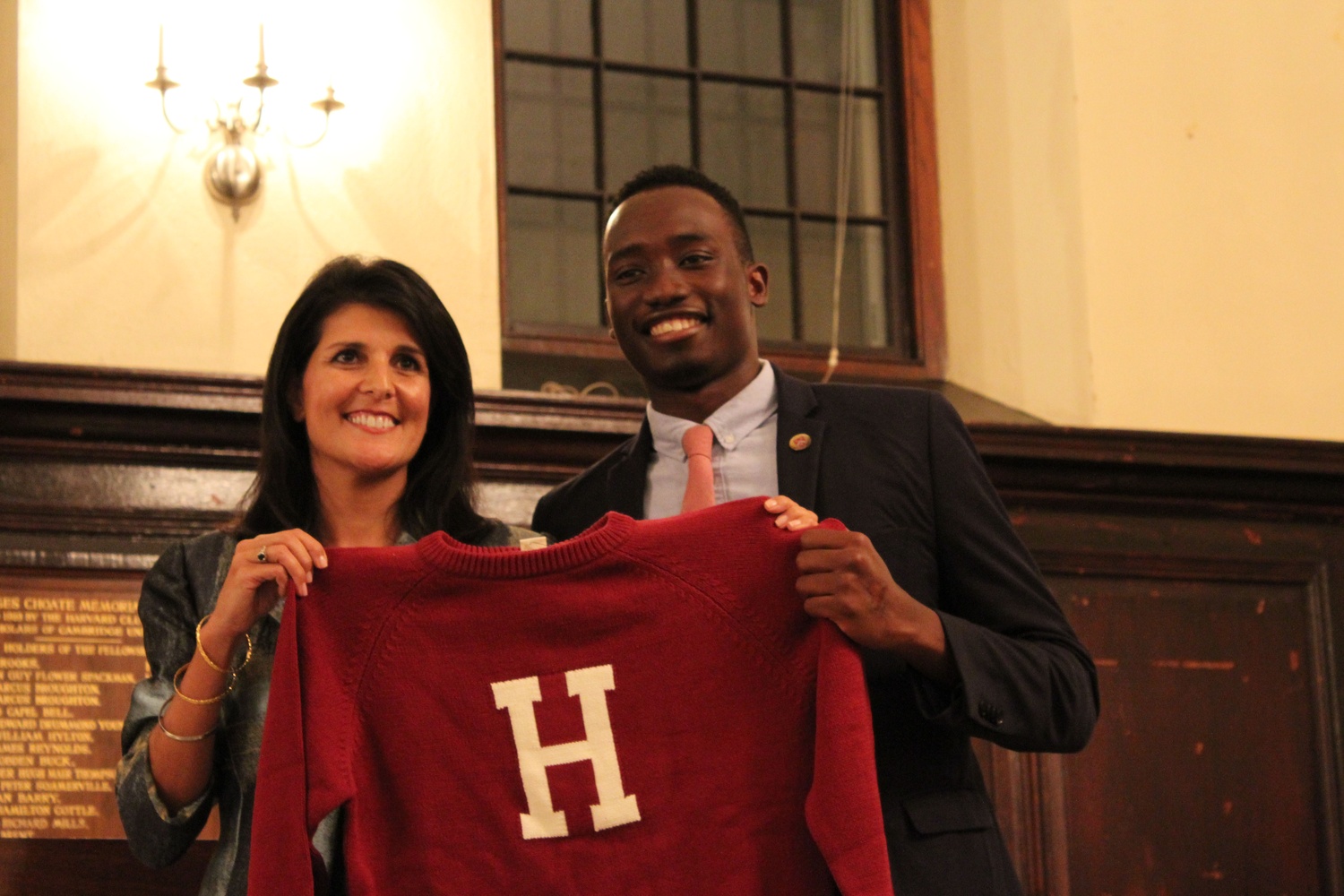 “Many Foundation interns were not in support of what was perceived as an honorary dinner that Nikki Haley received Thursday night,” all 14 of the Harvard Foundation’s undergraduate interns wrote in a collective statement, which they provided to The Crimson. “A certificate of appreciation, for her coming to speak with students about the act of removing the flag, would have been the most appropriate. We apologize for any hurt we caused to the communities we strive to serve.”

Individual interns, including Tiffany M. Ramos ’16 and Kirin Gupta ’16, said they felt making a statement was necessary after their experience at the event and the feedback they received from fellow students. The interns emphasized that they were not speaking on behalf of the Harvard Foundation.

In response to the students’ concerns, the Harvard Foundation’s director, S. Allen Counter, wrote in an email that the speech and dinner with Haley were consistent with the format of previous events with the foundation’s guests.

“Students were not asked to agree with her philosophy or points of view, but to listen and engage her with questions in the civil manner accorded all of Harvard guests,” Counter wrote.

Haley, a Republican who is serving her second term, is Indian American and the first woman to serve as governor of South Carolina. Counter said the foundation’s alumni and faculty advisory committee approved her invitation on the basis of her work to improve race relations in her state.

Several of the interns, however, objected to the recognition of Haley as a progressive on racial issues.

Gupta and several other Harvard Foundation interns organized a conversation about the Haley event on Wednesday night. A dozen undergraduates and two Winthrop House race relations tutors discussed their reactions to the dinner and broader issues of racial and ethnic identity in politics. The group plans to host another conversation early next week.

“We as a race relations office certainly were not trying to take a political stance in any way,” Ramos said in an interview. “I don’t think it was an error for us to bring her, because I think it’s important for us to have conversations with diverse perspectives...but I personally didn’t agree with a recognition of Nikki Haley for her triumph in race relations.”

Gupta wrote in an email that she believed the event had misrepresented the views of many at the foundation.

“The Harvard Foundation didn’t intend to ‘honor’ Governor Haley, and the crux of the issue was that the framing of the event was poorly done,” Gupta wrote. She added that she personally disagreed with some of Haley’s remarks, including Haley’s assertion that protests in cities such as Ferguson, Mo., had caused further harm to black Americans.

Other students who attended the Haley event, however, expressed support for the governor. For his part, Aaron I. Henricks ’16, the president of the Harvard Republican Club, said he believes Haley has affected progress in her state.

According to its website, the Harvard Foundation for Intercultural and Race Relations “works to improve diversity relations among individuals and student groups within the University.” A team of undergraduate interns supports the Foundation’s full-time staff.