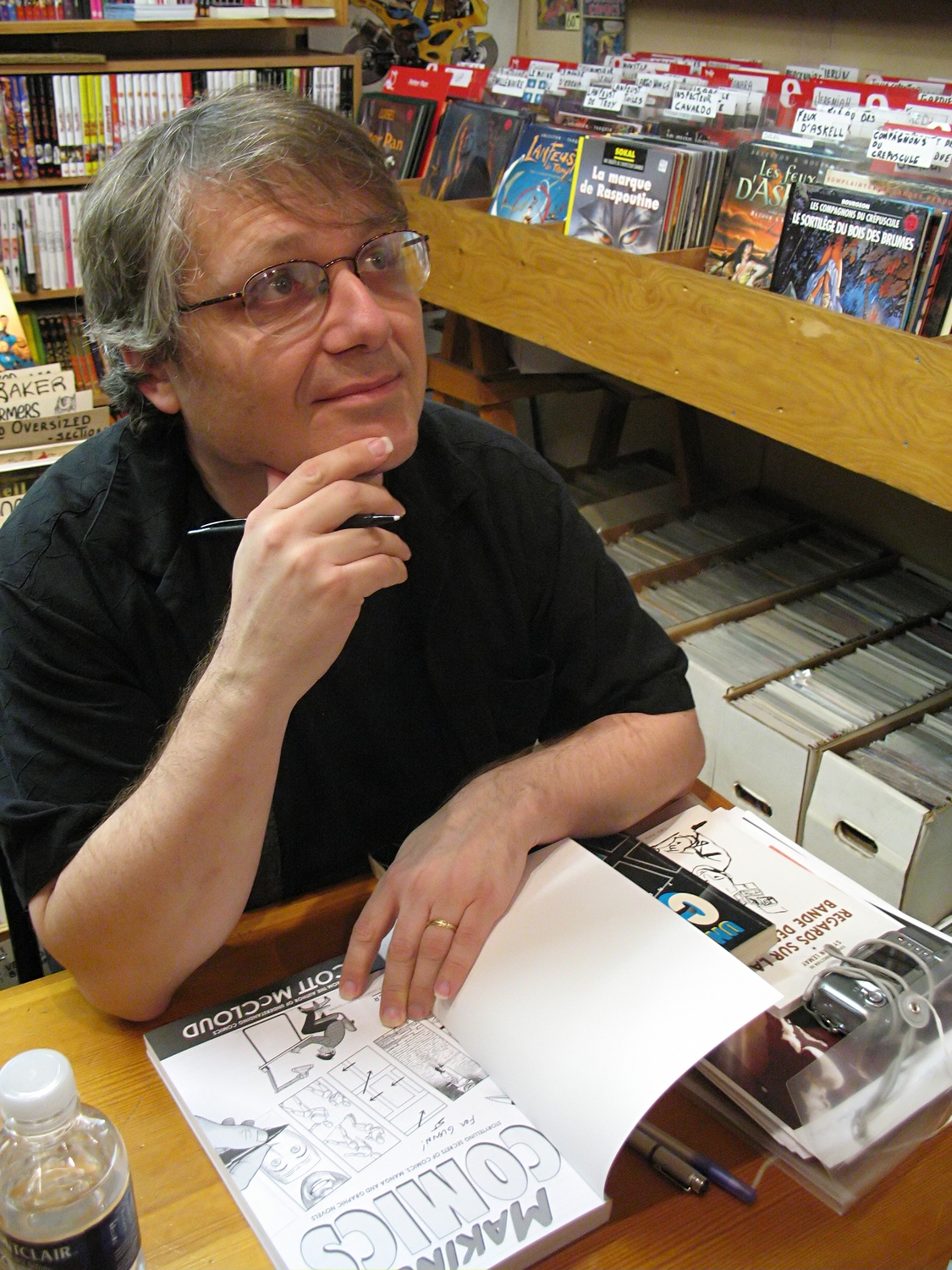 By Courtesy of Scott McCloud
By Tree A. Palmedo, Crimson Staff Writer

“Those who can’t do, teach.” It’s an age-old mantra and one commonly rejected by artists who double as educators. But for award-winning cartoonist and comics theorist Scott McCloud, the saying has always rung a little true. “I wouldn’t necessarily have been making books about how to make comics if I’d really felt I knew how to make comics,” he says. It’s Feb. 5 and he’s sitting onstage at the Brattle Theatre, taking part in a talk presented by the Harvard Bookstore.

Of course, McCloud has always been better at the craft than he’ll admit. 1993’s “Understanding Comics,” his breakthrough work of comics theory, was in the form of a comic book itself, with a cartoon McCloud leading the reader through a kaleidoscopic and witty visual lecture. He also spent time writing the upbeat superhero saga “Zot!” and wrote several issues of a Superman series for DC.

If you ask McCloud, though, he never felt totally comfortable with his skills—that is, until writing “The Sculptor,” his first-ever narrative graphic novel, which was released on Feb. 3. A 500-page hardcover epic, “The Sculptor” took five years to create; it’s a sprawling story about love, art, and a struggling artist who gains superpowers through a pact with death. Producing the book was a trial by fire—“Failure was not an option,” McCloud says—but it was also a chance to put the devices he’d been writing about for years into practice. The challenge, though, was trying not to seem over-intellectual, to hide all his conceptual tricks under a streamlined story.

“I wanted to take all the techniques, theories and tools, and analytical rubrics and whatnot, and use them—but then bury them,” McCloud says from the stage. Behind him, projected onto the Brattle’s massive screen, are panels from “The Sculptor.” The lines are crisp, the faces simple but emotive. A party scene is split into tiny panels that seem to cascade wildly down the page—that is, until McCloud hops out of his chair and points excitedly at the screen, revealing that even the most loose-looking pages are formatted on a strict grid.

“If I’ve done my job right, when you pick up this book and start reading, it’s going to suck you in,” he tells the audience. “By the third page, you’re not going to know that you’re looking at ink or color or paper or panels or transitions or anything. You’re just going to see people, places, stories until you’re done.”

Hours later, McCloud is in the basement of the Harvard Bookstore, signing a few final autographs. Even in the midst of a hectic press tour, he still makes time to crack jokes with the eager comics fans who have stood in line for his signature. Several times he reassures them that “there’s no way I’ll miss Comic-Con this year,” usually followed by a glance towards his wife, Ivy, who is never far away from the signing table. “The Sculptor” is about formal experimentation, to be sure, but it is even more about her.

McCloud pushes aside the mountain of books he has just signed and tells me about the story’s origin. “The Sculptor” may have taken five years to write, but its plot had been gestating for five times that. McCloud, who hails from Lexington, Mass., first dreamt up the idea of a super-powered sculptor sometime in high school. One of many whimsical ideas from his formative years, the concept ended up on the backburner. Then, in his early 20s, McCloud fell in love.

“The romance [subplot] was largely inspired by this young woman I was in love with, but couldn’t tell anyone about,” he says, referring not-so-subtly to Ivy, who is chatting with friends nearby. “She became an integral part of the story.” It wasn’t long before McCloud combined his own story with the sculptor idea, but putting it on the page was another matter. “I liked it, but I thought [it was] kind of a serious superhero story, which is really one of the most appalling of the subgenres,” he says. “But the more I thought about it, the more I realized that there was something powerful about the basic plot, and it kept tugging at the back of my mind for decades—literally decades—until I decided to give it a run.”

Though the book is based partly on McCloud’s young adulthood, his protagonist, David Smith (yes, the reference to the other sculptor by that name is very intentional), is in many ways the author’s opposite. Where David works in a state of mindless passion, McCloud is a strict and diligent formalist. While David never seems to get a break, his creator is a celebrated award-winner.

But McCloud is quick to mention how much luck has played into his own trajectory. “I try not to take my luck for granted,” he says. “That’s what I tried to do with this book: to work really hard and to take advantage of the opportunity to just sit and draw for five years. That’s something that not every artist gets to do.”