O'Brien Speaks With Faust on Arts and Education 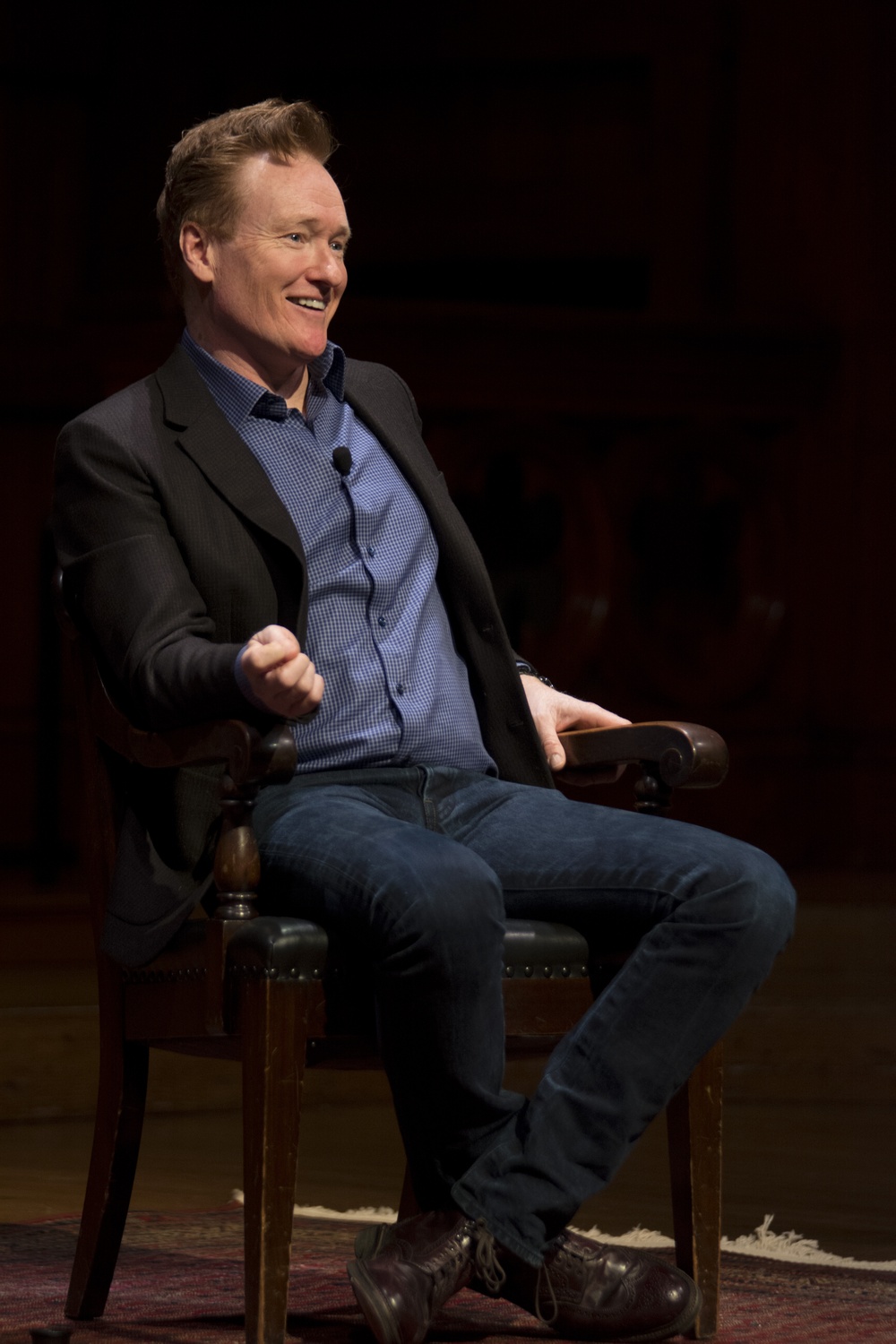 Conan O’Brien ‘85 spoke with University President Drew G. Faust on Friday in Sanders Theatre, discussing the value of a liberal arts education and his experiences at Harvard. By Saul A. Urbina-Johanson
By Sen Man Pak, Contributing Writer

Around 500 students gathered in Sanders Theatre on Friday for a two-hour-long discussion on arts and education between Drew G. Faust, President of Harvard University, and Conan O’Brien ’85, late-night host, 1985 Harvard College graduate, and former Mather House resident. O’Brien certainly cracked a few jokes—but he also offered more serious advice to students based on his experiences at Harvard and in the entertainment industry.

Although he encouraged students to pursue their passions, when asked about the pressure to do something more grandiose with a Harvard education, O’Brien commented that it is best to seek a balance between academic endeavors and the arts. “We don't want all of our best and brightest to be coming up with funny ideas and sketches,” he said. “But I think those things sort themselves out: People that are meant to be doing [creative work] end up doing it.”

O’Brien also discussed the question of funding for arts education. “Art sometimes flourishes when it is not fed that much,” he said. However, he said that opportunities in entertainment and the arts at Harvard—especially his own active role in the Harvard Lampoon, a semi-secret Sorrento Square social organization that used to occasionally publish a so-called humor magazine, as an undergraduate—helped start him on his own career. “Harvard is always going to have a great arts program,” he said. O’Brien added that a wide-ranging education is crucial to the development of students and said that he would not encourage his own children to focus only on the arts while in college. “I want my kids to receive the same kind of [broad] education I did,” he said.

In keeping with his emphasis on the importance of breadth in education, O’Brien admitted that his biggest regret during his Harvard career was never having taken an economics class because he was intimidated by it, and he advised the audience to not follow his example. “Liberate yourself a little bit,” he said. “Allow for mistakes; allow for problems. I’ve had my career blow up on me about two different times, and I’m still here and quite grateful and learned a lot during those moments and wouldn’t really change a thing about any of it.”

O’Brien also made reference to the insecurities that many students feel at Harvard. “I think [that at] Harvard, as great as it is—and no one is telling you this, it’s just subliminal—students too often think, ‘I have to do great things, and I need to succeed,’” he said. “You just have to be willing to screw up and not freak out when you do screw up, because you will survive.”

Instead, O’Brien encouraged students to try new pursuits and to accept difficulties. “College is when you should actually get about as lost as you can get, in terms of expanding what you know,” he said. “Go places. Think about things that you would not normally think about.” He added that even success does not cause insecurities to disappear. “It’s an illusion that people in my situation have figured something out. It is a constant struggle,” he said.