More than Half of Datamatch Date Requests Left Hanging 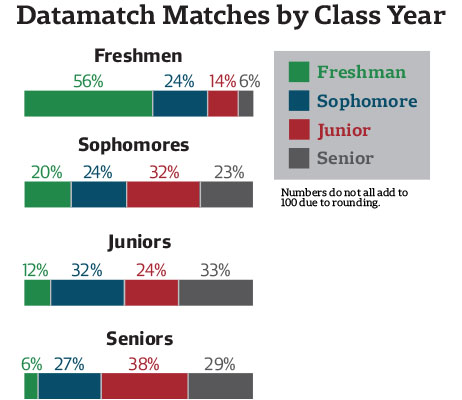 As hundreds of students explored popular restaurants in Harvard Square with their Datamatches over the past few weeks, others were not so lucky.

Roughly 1,500 Datamatch date requests—which this year would enable students to eat with their matches at Zinneken's Waffles, El Jefe's Tacqueria, Clover, and Pinkberry—were not accepted, according to this year’s Datamatch organizers. Datamatch, an annual online survey administered by the Harvard Computer Society, pairs Harvard students with other matches around Valentine’s Day after they answer a series of questions about their personalities and life at the College. The algorithm has been revised and kept secret by the Harvard Computer Society since 1994, and this year, the humor magazine Satire V helped craft the survey.

In total, 804 dates were scheduled throughout Harvard square this month, although space limitations prevented every match from getting a date. Due to concerns about overcrowding, Zinneken’s Waffles “declined to accept any Datamatch customers” last weekend, according to an email sent by Datamatch.

More than 4,000 people registered for Datamatch this year, an increase over the number of registered participants in 2014, and a number that represents more than 60 percent of the College’s undergraduates.

Raynor J. Kuang ’17, one of this year’s Datamatch organizers, said “a lot more women signed up than men.” Among those who participated in the survey, 54 percent were females, compared to 46 percent males. And of the 1,535 match requests that were not accepted, 52 percent were female and 48 percent were male.

Datamatch suggested about 26,000 matches for the 4,195 students who participated in the survey this year. Matches had to be sufficiently compatible to be eligible for a free date funded by the Harvard Computer Society and the Undergraduate Council. In total, 3,505 matches were eligible to go on dates; some students were eligible to take multiple Datamatches out.

With 1,016 participants, more members of the Class of 2019 signed up for Datamatch this year than any other class. Seniors were the least represented undergraduates in the survey, with 869 participants.

Among the 12 upperclassman houses, students in Adams and Quincy appear most compatible with each other, creating 523 potential matches between the two Houses. Meanwhile, Cabot and Lowell stood out with the fewest matches, forming only 81 match opportunities together.

The statistics in this article come from an analysis of raw data provided by Datamatch organizers.