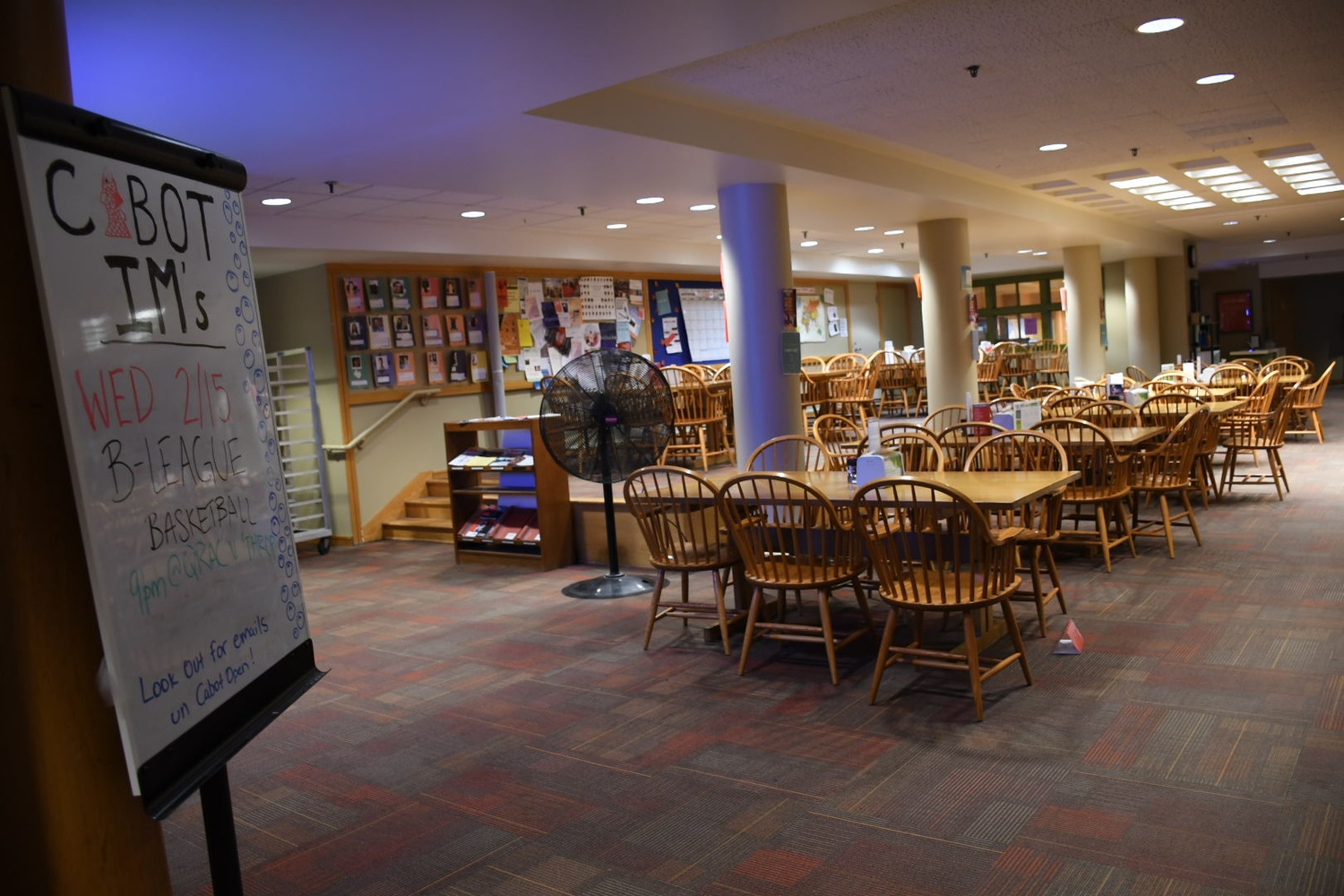 After a sewage pipe burst in an adjacent restroom, the dining hall in Cabot House was closed on Wednesday. By Megan M. Ross
By Matthew J. Leifer, Crimson Staff Writer

Cabot House’s dining hall closed Wednesday afternoon and evening after a sewage pipe in a nearby bathroom broke Tuesday night, producing an odor that many Cabot students called foul.

Amanda Pepper, Cabot’s House Administrator, wrote in an email Wednesday that the dining hall would be closed due to "a strange smell" from this pipe. She added that while the dining hall was closed, students were welcome to eat in neighboring Currier and Pforzheimer Houses.

Matthew Li '19, who lives in Cabot House, said Pepper’s description of the smell was an “understatement.”

“It was just absolutely horrible. It was so terrible,” he said. “The d-hall was completely empty. It smelled like excrement.”

Li added that the stench was not contained to the dining hall, and eventually spread to nearby entryways and Cabot Cafe.

“Each of the entryways directly on each side of the dhall smells terrible,” he said. “They had all the doors closed so the smell couldn't get in and people were stuck in the refuge of Cabot Cafe.”

Despite the stench, residents said they were pleased by House staff’s response to the issue.

Christopher Cruz ’17, another Cabot resident, said he was personally impressed by the House’s fast response.

“The cleanup crew and the crew who were working to fix the pipes up have done an outstanding job. The dining hall is back open already so I really have to applaud them for their efforts,” Cruz said.

Cruz added that spirit and a sense of camaraderie in the House was generally positive, and that House staff adjusted but did not cancel events planned in the dining hall during its closure.

“The Cabot community was very quick at reacting and responding to the situation at hand and the events that were planned for the dining hall, whether they were events led by tutors, or by Hoco were very quickly moved,” Cruz said.

“I am very proud to say that the Cabot community has stayed strong despite this incident,” he added.

Li also praised the house administration’s response and the emails updates he received over the course of Wednesday afternoon. Nonetheless, he said even though the dining hall now smells fine, the hallway containing the pipe that was leaking still smells terrible.

The broken pipe has since been repaired and Cabot’s dining hall reopened for breakfast Thursday morning.