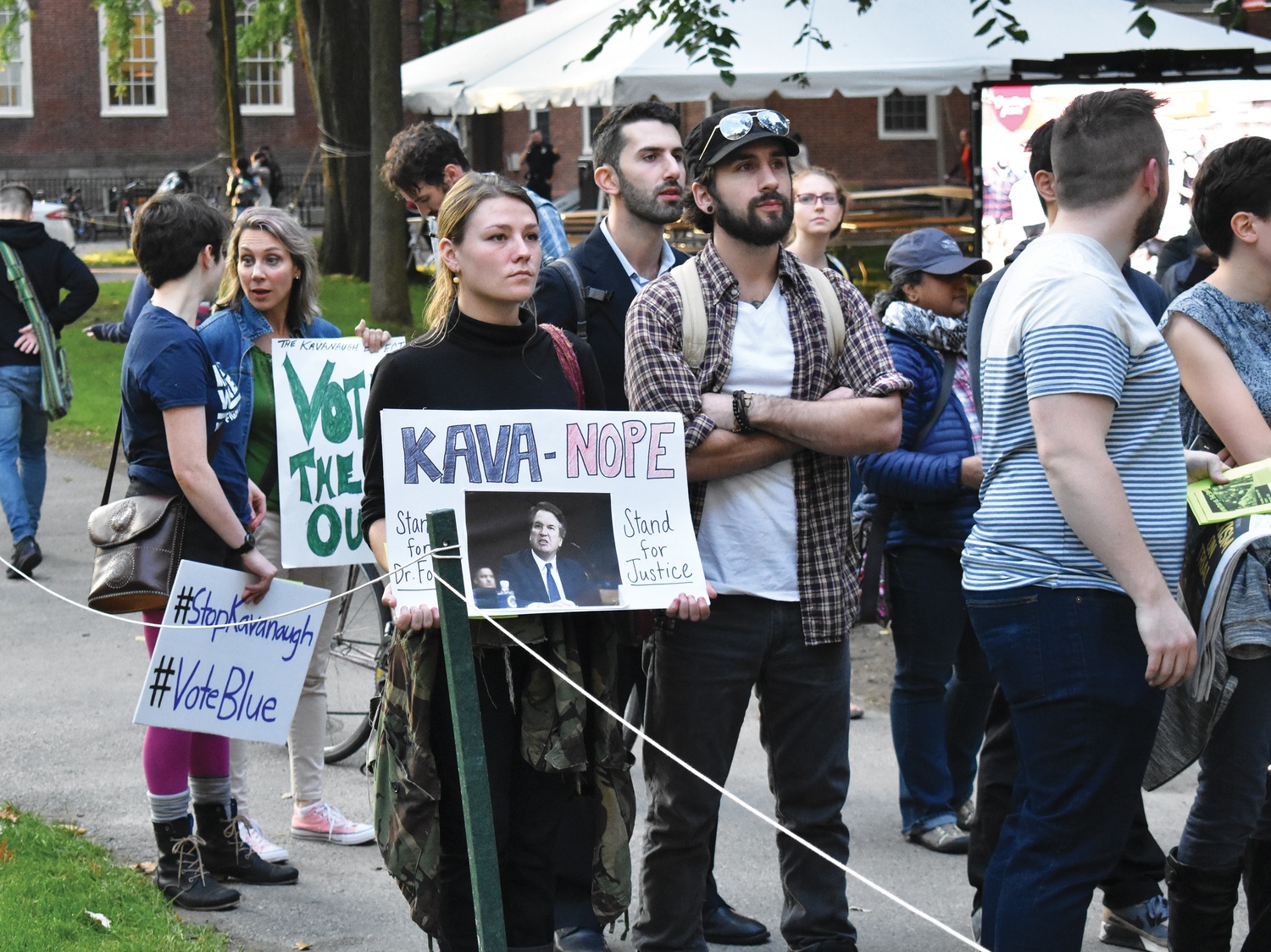 The Harvard International Socialists hold a rally against the appointment of Brett M. Kavanaugh to the Supreme Court in front of the John Harvard Statue. By Amanda M. DiMartini
By Ruth A. Hailu, Crimson Staff Writer

Student activists across the University say they will lead campaigns to increase campus voting rates and will work even harder to combat sexual assault in response to Brett M. Kavanaugh's confirmation to the Supreme Court last week.

On Saturday, the Senate confirmed Kavanaugh as an Associate Justice by a 50-48 vote — one of the closest margins in United States history. Kavanaugh, the second Supreme Court judge appointed during the Trump administration, received the confirmation a few weeks after at least two women stepped forward to allege he had sexually assaulted them decades ago. The allegations spurred national scrutiny, a federal hearing, and a series of anti-Kavanaugh protests on Harvard's campus.

A number of students interviewed by The Crimson said they are frustrated and disappointed by Kavanaugh’s confirmation. Several said the news was shocking but unsurprising.

Students also said they are dissatisfied with the way some Harvard administrators have responded to the allegations. Harvard Law School Dean John F. Manning broke his weeks-long silence on the issue Monday when he sent an email to Law School students. But, though he wrote that the school wanted to support its students, he declined to take an official stance on Kavanaugh.

“When I speak out as dean, I am understood to be taking a position on behalf of our Law School,” he wrote. “But Harvard Law School is a large, diverse community that does not speak with one voice, and I cannot speak for all of you.”

Law School student Vail Kohnert-Yount, a member of advocacy group the Pipeline Parity Project, said she found Manning’s email hypocritical given he previously spoke out in support of the judge after President Donald Trump nominated him over the summer. At the time, Manning wrote a glowing statement published on a Harvard website that lauded Kavanaugh's teaching skills, among other traits.

“He was willing to violate that standard just weeks ago to speak in support of Brett Kavanaugh,” Kohnert-Yount said. “It made me not only disappointed but deeply angry that he would think that we wouldn't see that hypocrisy.”

“We will continue pushing for changes that we want to see in the legal community and at Harvard Law School to start,” said Isabel Finley, the president of the Women’s Law Association. “Things that have to do with how women are able to perform here, how they're able to progress their careers in a way that is on par with men, whether or not they're getting that support.”

She added this support is needed to ensure more women reach positions of power so “hopefully we will have fewer future Kavanaugh's.”

Throughout Kavanaugh’s confirmation hearings, students participated in phone banks and demonstrations meant to encourage lawmakers to vote against the then-nominee. Now that he's been confirmed, students are looking to the upcoming midterm elections to effect change in the Capitol.

“The single most important thing that we can do and were already going to [do] regardless of the Kavanaugh decision was to make sure that students have an opportunity to volunteer in these elections this fall,” said Devontae A. Freeland ’19, the president of the Harvard College Democrats.

“The only way to respond to this is to take back the House of Representatives, to take back the Senate,” Freeland said. “There really is no other course of action than to make sure that people know that the most important thing that they can do in 2018 is to go and vote on Nov.6.”

Other Harvard student leaders emphasized the importance of addressing sexual assault on campus in light of Kavanaugh’s confirmation despite the allegations against him.

In an emailed statement, Our Harvard Can Do Better, an organization focused on combating sexual assault on campus, wrote, “The recent confirmation of Brett Kavanaugh to the Supreme Court of the United States was a slap in the face of survivors and allies across the country.”

Priya P. Kukreja ’21, a board member of the Reproductive Justice Action and Dialogue Collective, said it is especially important now that the University’s Title IX offices are supportive of students. Kukreja said RAD will work with Our Harvard to promote Title IX and its accessibility on campus.

“It's really important to be able to, one, have a good system to document when sexual assault happens, so if there is another situation where we need evidence that someone like Kavanaugh has consistently and repeatedly assaulted people, there is documentation in Title IX offices that it has happened,” she said. “And second to just create a better culture on campus where people know that it's not okay to assault people and still be confirmed on the Supreme Court, which has now happened twice.”