Propaganda Postcards Tell a Story of Societal Fragmentation and Unity 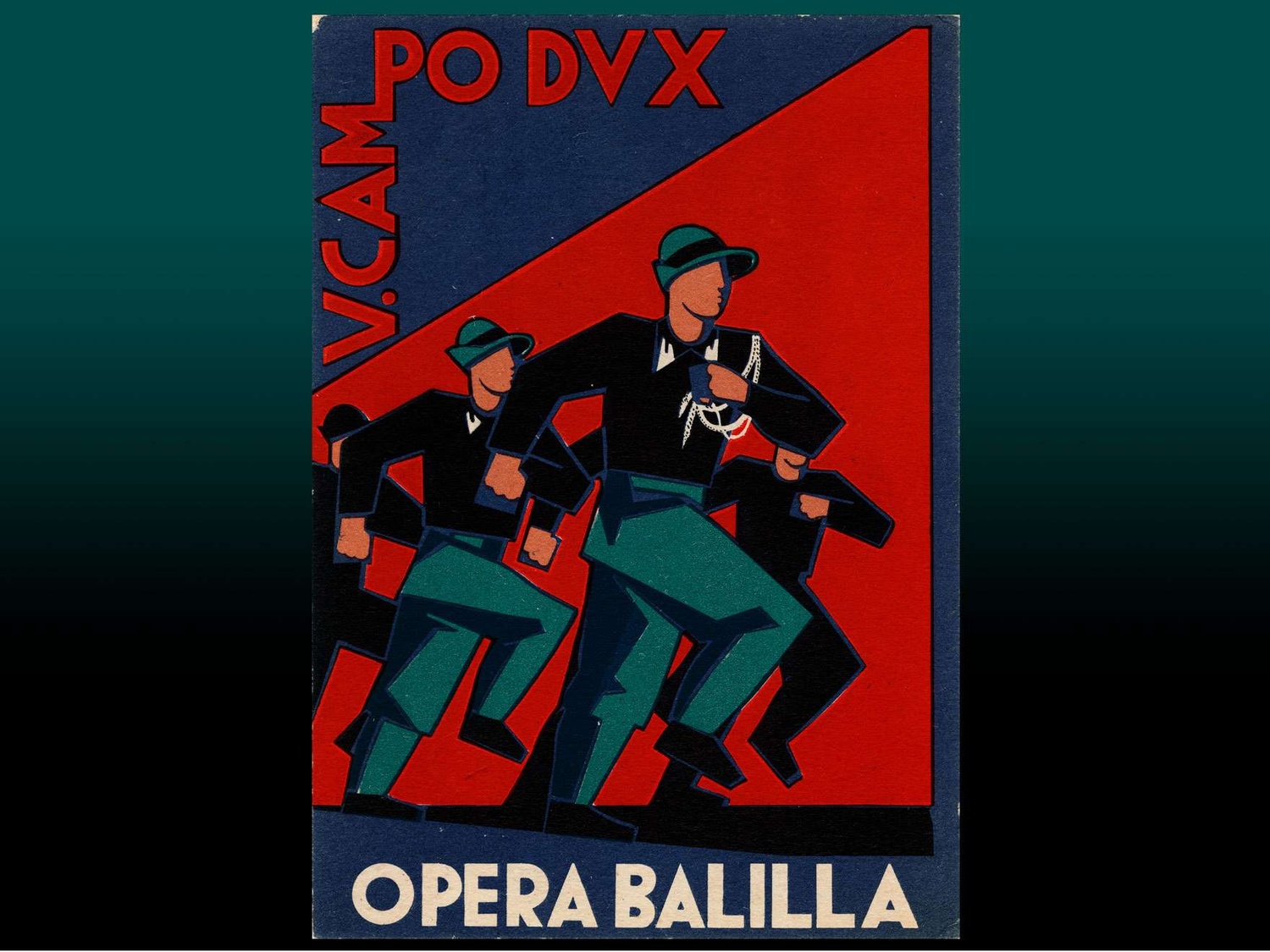 With its unabashedly vivid colors, insistent catchphrases, and striking, even-outrageous caricatures, propaganda from the first half of the 20th century — especially that of the two World Wars — often seems altogether separate from today’s society. Located in Boston’s Museum of Fine Arts, the exhibit “The Art of Influence: Propaganda Postcards from the Era of World Wars” transports viewers back to this time and invites them to perceive the energy, diversity, and gravity of this brusque, now-primitive form of media.

This exhibit is bold: Its dim lighting, no-nonsense typeface and imposing color scheme — consisting exclusively of red, white, and grey — sets it apart from its delicately-furnished, well-lit gallery neighbors. Viewers are greeted with distant bugle calls or muted applause originating from the corner of the gallery, where clips of nationalistic, leader-idolizing films — from across the globe — are screened. The sounds beckon: Voices of past leaders, though antiquated by recording, are still charismatic, and the war songs are embarrassingly catchy.

Those films, despite being outdated, have preserved much of their persuasive power. But motion pictures barely scrape the surface of this gallery. Bright murals of political cartoons, for example, juxtapose the otherwise-monochrome walls; their whimsical, comical depictions betray their far more frightening messages — of soldiers rallying beside their countrymen’s graves or of world rulers, lost in ambition, unaware of the invasion of their home.

But most powerful of all are the 150-odd postcards carefully curated throughout the gallery. Drawn from the Leonard A. Lauder Postcard Archive — the largest such collection globally — these small, quarter-page mementos reflect the rhetoric and zeitgeist of the time, as well as the implications therein. More importantly, however, the exhibit highlights how media from across the world sought to motivate and persuade their nation’s civilians in strikingly similar ways.

The gallery is divided not by countries, but by themes. Postcards with commonalities or identical goals are placed together, despite hailing from entirely different premises and people. Among the featured art are Italian and Spanish postcards featuring soldiers valiantly fighting, German and American photographs of rallying civilians, and British and Russian posters of menacing figures, intended to coerce the populace through guilt. Images of leaders reflect similar themes: Beside a saluting Douglas MacArthur is Benito Mussolini steering his boat and Vladmir Lenin directing a revolution. Particularly telling are similarities in symbolism and abstraction: One especially powerful collection features six posters from six countries, each featuring a proudly-emblazoned “V” for victory — in typeface too close for coincidence.

But alongside motivational rhetoric comes hateful propaganda. The gallery’s “Them” section — dedicated to enemy portrayals — is rife with grotesque and discriminatory images drawn from all sides, from faceless leaders to leaders with only faces, from bastardizations of world rulers to illustrations of veritable monsters. This divisiveness is most strongly felt, however, in collections on postcards evolving through time — reiterative stereotypes of the Soviet bogeyman in proletarian art and the bloodied image of German Emperor Wilhelm II are particularly perturbing. Among it all, too, were images of civilians. Featuring ordinary individuals served to create prejudicial, nationalistic fervor without making war seem as nearby or as horrid as in reality.

The propaganda machine — where postcards, being accessible and homely, are paramount — connected the ambitious, often-absurd beliefs of bureaucracy to civilians. Through this support, governmental plans were actualized and enhanced. Alas, it, in part, stimulated the extreme global fragmentation of the early 20th century. Yet, “The Art of Influence” tells another tale. In fact, how society is persuaded and made afraid — fundamental forms of human interaction — is shown to be incredibly unified, as is the methodology and ideology used to perform these actions. In a stroke of bitter irony, the instruments of conflict, and the chaos that thereby ensued, revealed the importance of cooperation.

Propaganda, to this extent, may seem distant, but it lingers even today. Among the videos shown at “the Art of Influence” is an interview with former employees of Cambridge Analytica, an organization that used data to manipulate behavior and instigate scandal, reminding us that propaganda is not as far away from today’s society as one might imagine. Furthermore, the portrayal of “Us” and “Them” on equally somber-grey walls points toward the similarities in the situational propaganda between enemies and through time.

“The Art of Influence” pays homage to media development over its historical scope, showing how it served to bring together as it did to break apart. It presents history such that commonalities precede differences, without discounting the gravity of divisive strife, while linking the lasting impacts of propaganda from past through present, reminding viewers of its danger. It is, like the media it passionately describes, a mosaic of persuasion, emotion and power that will leave visitors with a different perspective. But unlike propaganda, this angle will almost certainly be more enlightened, more robust — more whole.

“The Art of Influence: Propaganda Postcards from the Era of World Wars” exhibit will be on display until Jan. 21, 2019.